This Salted Caramel Churro French Toast is one of my most popular dishes at our boutique hotel, the Black Dolphin Inn. Thick cut, old fashioned french toast is tossed in cinnamon sugar and finished with a drizzle of salted caramel (or syrup!) and topped with fresh berries. It’s a super easy breakfast recipe that tastes super fancy!

As an executive chef at my family's bed and breakfast, The Black Dolphin Inn, I have a ton of breakfast recipes up my sleeve.

And to be truthful, I don't share them that often because I feel like it's a little overkill in the breakfast department of my life.

But now that the quarantine is in full force and I'm 31 weeks pregnant, I haven't been cooking at the hotel.

And ya know what? I miss making ridiculously tasty breakfast recipes!

So instead of keeping them all to myself, I figured I should probably start sharing some of my most popular recipes so you can enjoy them at home.

That's where this Churro French Toast comes in.

No matter what time of year this dish appears on the menu, I can always count on it as being one of the most ordered and requested items.

What makes it so special?

Once it's done, the slices are tossed and coated in cinnamon sugar.

I typically top it with a variety of berries, depending on whatever is freshest and most flavorful!

Then the whole thing is finished with a big drizzle of salted caramel.

Between the crispy buttery crust, the sweetness from the salted caramel, and the freshness of the fruit, it's always mouthwatering!

And if you're working with limited ingredients, don't sweat it! I got you! You can find my tips and tricks below!

Ingredients - what you need

How to make french toast

Making French Toast is one of the easiest breakfast recipes around.

To begin, grab a wide shallow bowl that you can easily fit a piece of bread into.

Now whisk together egg, milk, cinnamon and vanilla and then set aside.

Then, melt a some salty butter in a large nonstick fry pan over medium heat.

While the butter is heating up, dip 1 piece of bread in egg mixture. Make sure that the batter coats both sides of the bread. You don't need to soak it - a light dunk will be just fine!

Now place that slice of bread in the fry pan and repeat with a second slice.

Cook both slices until golden brown then flip. After you've flipped them, add some more salty butter and let this side crisp up until golden and delicious.

Repeat this process for the remaining two slices of bread.

Once all the bread is golden brown, you're set to move on.

How to make it churro style

Making regular old french toast churro style is one of my favorite upgrades because it's so easy and so delicious.

As the french toast is cooking, stir together white sugar and a little bit of cinnamon.

Once the French Toast is ready to be plated, toss the bread with the cinnamon sugar - being sure to sprinkle it on top if it's not entirely coated.

Place the french toast on your plates and top with a handful of fresh berries if you'd like.

Finish with a drizzle of salted caramel. If you don't have salted caramel, you could definitely use regular syrup, chocolate syrup, or thinned out nutella to stick to the churro theme.

Lastly, add some more butter on top and serve immediately.

Can i use something other than milk?

If you don't have milk, you can still enjoy this recipe!

Just follow the recipe as is, but instead of using milk, swap it out for half n half, heavy cream or any non-sweetened nondairy alternative.

Why non-sweetened? The sugar in the nondairy milk will burn too quickly and will create a bitter taste which we do not want.

If you'd like some more tasty brunch style recipes, I would highly recommend pairing this churro french toast with

For baked goods, why not try these easy puff pastry cinnamon rolls, this cake-mix banana bread or these cutie pie asparagus and goat cheese puff pastries?

For heartier savory recipes, you could try these flaky english sausage rolls or the internet's favorite Japanese egg salad sandwich.

You could try my go-to kale juice recipe with one of my newest copy cat recipes - the Dishoom breakfast bacon sandwich!

Want to save this recipe for later?

I love when you save my recipes for later! That's why I made these cutie pie little pinterest images so you can save them for when the time is right! 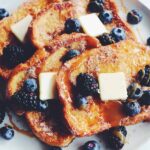 If you don’t have milk, you could use half n half, heavy cream or any unsweetened nondairy milk.
Share
Pin
« Dishoom's Naan Breakfast Sandwich with Bacon, Cream Cheese, Chili-Tomato Jam & Cilantro
Creamy Stovetop Pesto Cavatappi Mac and Cheese »