These puff pastry cinnamon rolls are so dreamy - especially for people who don't like to bake! Store-bought dough gets rolled up with cinnamon bun goodness and baked until golden and delicious! And on top, the sweet cream vanilla glaze adds the perfect finish!

As you know, I'm pretty much the opposite of a baker.

I literally mess things up every time. There's just something about it that my brain can't seem to get right.

Maybe it's because you're just pouring white stuff into white stuff and hoping for the best?

I don't know but I do know that there are many ways around being a bad baker yet still making baked goods!

For example, my cake mix banana bread is beyond easy. My churro cinnamon sugar rice krispies were even featured in Rachael Ray Magazine... well without the canna-butter but you get it!

And these blueberry lemon ricotta bars, my prized joy, are so easy even for non-bakers like myself!

So yes, even though I don't like baking, there are ways around being a total fuck-up.

That's how these babies were born.

Simple store-bought puff-pastry is smeared with a thick slab of salty butter. Then it's topped with a hefty sprinkle of brown sugar and a dusting of powdered sugar.

The whole sheet is then rolled tightly and brushed with whisked egg wash.

The next step is inspired by Alison Roman's famous cookies. I took a cue from her and rolled the outside of the buns in demerara sugar (aka sugar in the raw).

The rolls are then cut up into small pieces and baked until they triple in size.

The bottom of the rolls almost caramelize from the brown sugar butter mixture.

And the outside of each roll is this perfect candied sugar crust that's reminsist of "the cookies".

My glaze is perfectly light and oh-so easy that even a kid could do it,

To start, simply thaw out frozen sheets of dough. Typically, boxes have two sheets each so we will be using both of these.

Once the puff pastries are thawed, preheat the oven to 400F degrees.

Spread a little bit of flour onto a clean surface and lay down one sheet of pastry.

Smear 1 tbsp of salty butter on top - end to end, corner to corner.

Then sprinkle with 2 tbsp of brown sugar half of the cinnamon sugar mixture (about 2 tbsp).

Tightly roll the sheet into a log and repeat same procedure for the remaining sheet of dough.

In a small bowl, crack an egg and discard the yolk.

Whisk the egg white then brush each log with it.

Roll the logs in raw sugar (demerara sugar) - about 3-4 tbsp until the sugar coats the outside of each log thoroughly.

Make sure that there is plenty of egg wash and sugar on the seams of each roll - this will help hold it together while baking.

Cut each log into 6 equal sized pieces and place on a lined baking sheet. I highly recommend using a silicon baking sheet (aka a silpat) as nothing sticks to it -- especially the caramelized brown sugar-butter bottoms of these buns!

Now simply bake for 30 minutes or until golden brown. Remove from oven, let cook for 10 minutes then drizzle with the vanilla glaze. 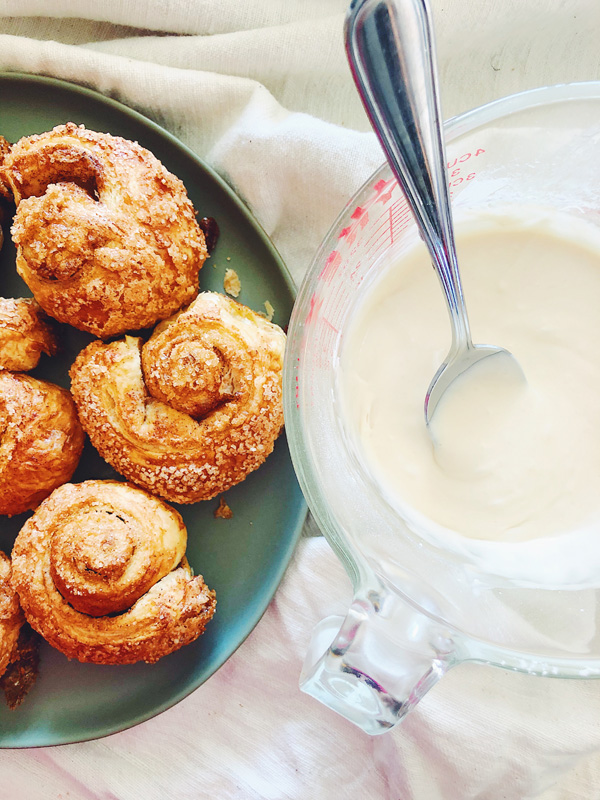 How to make the Vanilla Glaze

In small bowl, whisk together 1 cup powdered sugar with 4 tbsp heavy cream (milk or half and half works too!).

Stir in 1 tsp vanilla extract and 2 pinches of salt (about ¼ tsp).

Set aside until you're ready to drizzle of the finished cinnamon buns.

And if you'd like to save these recipes for later, pin them below!

These puff pastry cinnamon rolls are so dreamy - especially for people who don't like to bake! Store-bought puff pastry gets rolled up with all of that cinnamon bun goodness and baked until golden and delicious! And on top, the sweet cream glaze adds the perfect finish!

For the Cinnamon Buns

For the Vanilla Glaze

For the Cinnamon Buns

For the Vanilla Glaze