This viral tiktok cinnamon rolls hack uses heavy cream to make the buns light, fluffy and moist. They taste JUST like cinna-bun especially if you use the ones by Pillsbury. Once you try this hack, you will never make them any other way ever again!

What is the viral tiktok cinnamon roll hack?

They are very similar to Cinnabun and they taste amazing!

Where did this trend originate?

I first saw @mississippi_kween do it but she credits @mantha in her original caption.

Although after deep diving to try and see where @mantha got it from (as she says "tiktok made me do it) I'm still unsure!

If I find out who the original poster was, I'll definitely update this post!

How to make them

Like any viral hack, this cinnamon roll recipe is super easy!

Basically preheat your oven and spray a large baking dish with nonstick spray or melted butter.

Add the cinnamon rolls - making sure that they're spaced equally apart with room for them to expand.

Pour the heavy cream over the top of the cinnamon rolls and place them in the oven.

Bake for 27-30 minutes - or however long the store bought cinnamon buns you're using says.

Once the buns are cooked through, they'll be light, fluffy and moist.

Top with the icing and serve immediately.

What goes with Cinnamon Rolls

Since cinnamon rolls are traditionally served as a breakfast food, I recommend serving them with my air fryer breakfast potatoes, this avocado bagel, or even my fav baked egg dish - huevos con chorizo.

Want to save the recipe for these insanely delicious viral tiktok cinnamon rolls for another time? I thought so!

You can pin any image on this page or use the pretty ones I made below specifically for your Fall pinterest boards.

And if pinterest isn't really your thing, you can always scroll down to the bottom of this post and print the printable recipe card. 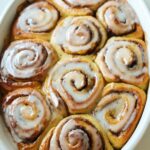 This viral tiktok cinnamon roll hack uses heavy cream to make the buns light, fluffy and moist. They taste JUST like cinna-bun especially if you use the ones by Pillsbury. Once you try this hack, you will never make them any other way ever again!
Prep Time5 mins
Cook Time30 mins
Course: Breakfast, Dessert
Cuisine: American
Keyword: cinnamon rolls, heavy cream, tiktok hack, viral recipe
Servings: 10 servings

If you're using another brand, adjust time accordingly,
If you're only making one package of cinnamon rolls, use ½ cup heavy cream.
Share
Pin
« Rigatoni Campagnolo