Bourdain's Mortadella Sandwich is one of the most heavenly things I've ever eaten! With simple ingredients like crispy pan-fried mortadella, melty cheese, and a warm, toasted bun, this sandwich is simple but divine. The original recipe appears in his cookbook and this is my adaptation.

What is Bourdain's Mortadella Sandwich?

This sandwich itself was inspired by one of his trips to Brazil.

During this episode, he visited Bar do Mané, which is an iconic sandwich bar in Sao Paulo, Brazil.

This restaurant/bar is known for their heaping mortadella sandwiches that are oozing with delicious melted cheese.

It's one of those dishes that highlights the influence from both Italy and Brazil.

He loved it so much that he even added it to his cookbook, Appetites - with his own spin of course!

After I got his cookbook, I scoured the pages and was so excited to find it in there.

So here is my adaptation of Bourdain's mortadella sandwich!

To begin, you'll first want to heat up a cast iron skillet over high heat. If you have a griddle function on your stovetop, that works, too!

While it's heating up, it's time to prepare the mortadella.

Since we're using a whopping ½ of meat on each sandwich, we'll begin by breaking it down into three piles.

Bourdain recommends that there are air pockets in between the slices of meat so to do that, we'll be folding, clumping, and piling the mortadella slices on top of each other to create each pile.

Once the cooking surface is hot and the meat piles are prepared, you'll quickly add some oil to the pan immediately followed by the piles of meat.

Let the mortadella cook for a minute or two until it develops a golden, crispy crust.

Then flip it over and cover each of the 3 piles of meat with a slice of chese.

Once the bottom is crispy, stack the piles on top of each other and get ready to toast the bun.

Split the bun in half and place it, interior side down, on the pan.

I recommend moving it around so that it soaks up all the little bits of oily goodness that are left in the pan.

Once the bun is warmed through and develops a slight crust, it's time to remove it from the heat.

Add the meat and cheese stakcs to the middle and close the sandwich up.

Slice it down the middle and serve immediately.

Anthony Bourdain also says to serve it with an ice cold beer which I highly recommend!

What to serve with it

This sandwich goes perfectly with an ice cold beer!

But if you wanted to pair it with some other tasty stuff, try these ideas!

If you're feeling the crispy meat vibes, try this fried prosciutto, strawberry and burrata salad. Or for a vegetarian option, try this sheet pan cauliflower piccata or a burrata caprese.

You could also pair it with some chicken florentine soup or even this rustic tortellini soup.

Want to save Bourdain's Mortadella Sandwich recipe for another time? I got you!

You can pin any image on this page or use the pretty ones I made below specifically for your sandwich and travel-inspired pinterest boards.

And if pinterest isn't really your thing, you can always scroll down to the bottom of this post and print the printable recipe card. 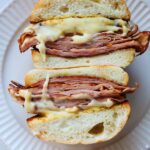