These chorizo nachos are so delicious! Whether you serve them as an appetizer, snack or dinner, they deliver! Packed with tons of cheese, chorizo, and tasty colorful toppings, and baked until bubbling and delicious - it’s no surprise that everyone loves them!

How to make Chorizo Nachos

Making this chorizo nacho recipe is beyond easy -- anyone can do it!

The first thing you'll want to do is preheat your oven to 400F degrees.

While it's heating up, it's time to build the nachos.

If you're using a cast iron, like me, you'll want to arrange half the chips in the pan.

If you don't have a cast iron, you can use a baking sheet, pie pan, or any other oven-safe baking dish/pan.

Once half the chips are down, it's time for the cheese.

Since we're using two cheeses, we're going to add half of each cheese to this layer. Once the cheese is on, add half of the chorizo.

Now it's time to add another layer of chips. Once again, we're going to top with the remaining cheeses and chorizo.

After it's assembled, bake for 10-15 minutes until melty and starting to brown.

Meanwhile, it's time to prep the toppings.

Go ahead and cut up the cilantro, tomato and avocado.

Once the nachos are done, remove the cast iron pan from the oven.

Now it's time to pile on the toppings.

Sprinkle on the cilantro and then top with tomato, avocado, sour cream, pickled jalapenos, pickled onions and a sprinkle of flaky salt.

If you don't have pickled red onions on hand, you should use this shortcut!

Thinly slice red onions, and toss them with lime juice, sugar and salt. It'll have the same effect after they've sat for 5-10 minutes.

Now it's time to serve and enjoy!

What Kind of Chorizo Should you use?

There are a tons of different types of chorizo. From hard cured chorizo that comes in a salami-like log, to fresh ground chorizo - it's hard to know what to use.

For nachos, I think it's best to go for fresh ground chorizo so that it stays nice and crumbly while cooked.

How to reheat nachos

Reheating nachos can be kind of a nightmare. The chips get soggy and the toppings get sad over time.

To reheat nachos, it's best to do it at a super low heat in the oven, spread out on a baking sheet.

First, you'll want to remove any ingredients that you don't want hot and wilted (think cilantro and lettuce) then place the nachos, spread out evenly across a baking sheet.

Heat your oven to 275F degrees and place the nachos in. Keep an eye on them because the nachos tend to burn before the other ingredients get heated through. It should take 5-10 minutes but depending on the tortilla chip, it might burn so def stay close by the oven while reheating.

You could also pop them in the air fryer at 275F for 3-5 minutes if you have one.

And lastly, there's always the microwave but they won't keep the chips from getting soggy.

What to pair with Chorizo Nachos

If I were making these chorzo nachos for an appetizer, I would definitely pair them with these grilled chicken burritos or some tostadas de pollo.

And if you're wondering what to do with the other half pound of chorizo? You must make my favorite breakfast dish - huevos con chorizo!

Want to save this recipe for chorizo nachos for another time? No worries!

I made these colorful and eye-catching images below so that you can save them to your pinterest boards.

Oh! And if don't do social media, you can scroll to the bottom of this post and you can print or save the recipe card! 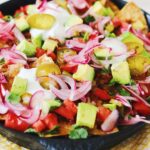