This Chinese Cabbage Salad with crunchy ramen bits is one of those recipes that never gets old. Growing up, it was at every potluck my mom dragged me to and for good reason! Crunchy Napa cabbage is tossed with toasted ramen bits, salty sunflower seeds, fresh cucumber, and scallions. The whole thing is drizzled with an easy Asian Dressing that’s downright addicting! 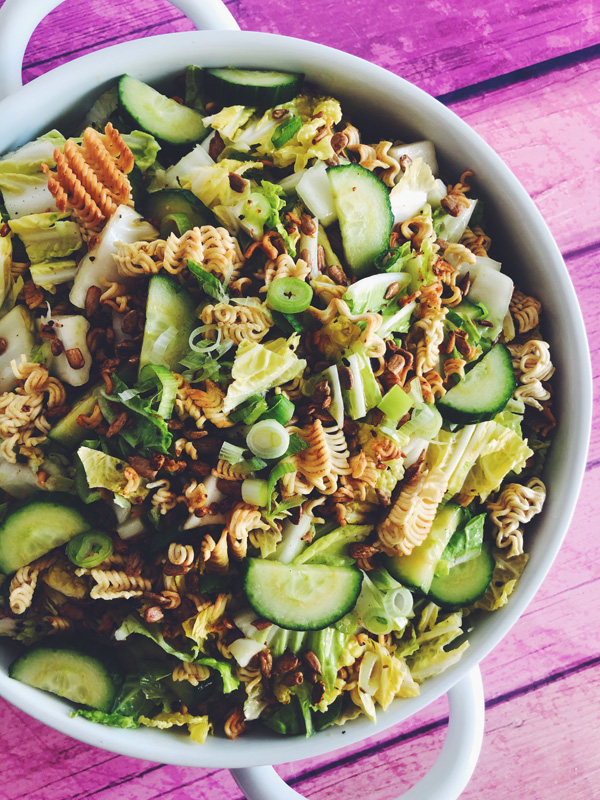 There aren’t many childhood potluck recipes that I can say I still truly crave.

Except for this Chinese Cabbage Salad with crunchy ramen bits!

It’s still just as delicious and just as addicting.

In fact, it’s one of my pregnancy cravings that I just can’t get enough of. 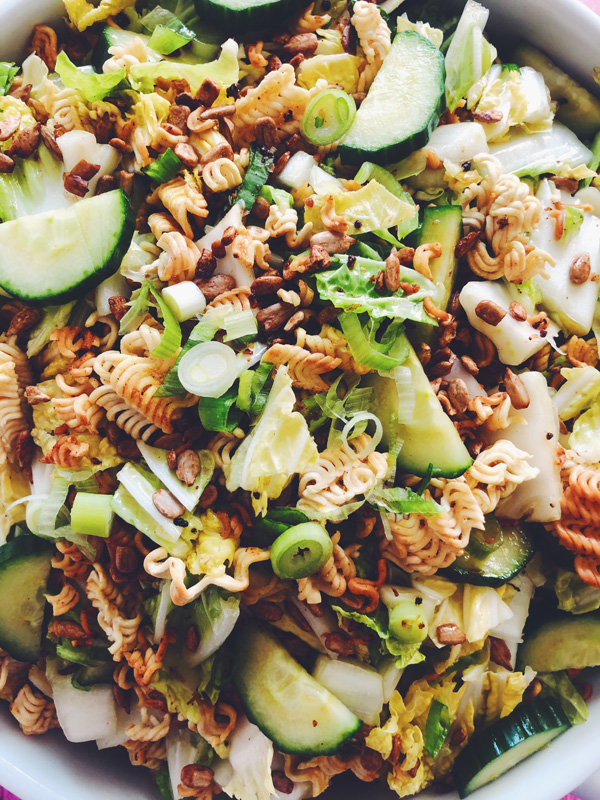 It’s crunchy, sweet, sour, and salty which is basically all that is good in the world.

Although there are many renditions of this recipe all over the internet, this is how my mom always did it and for that, I’m sharing it as-is.

Simply shred one head of Napa Cabbage and toss with sliced cucumbers and finely diced scallions.

The dressing itself is made with rice wine vinegar, a neutral oil of your choice, sugar, salt and toasted sesame oil.

But the real star of this salad is the crunchy ramen bits. 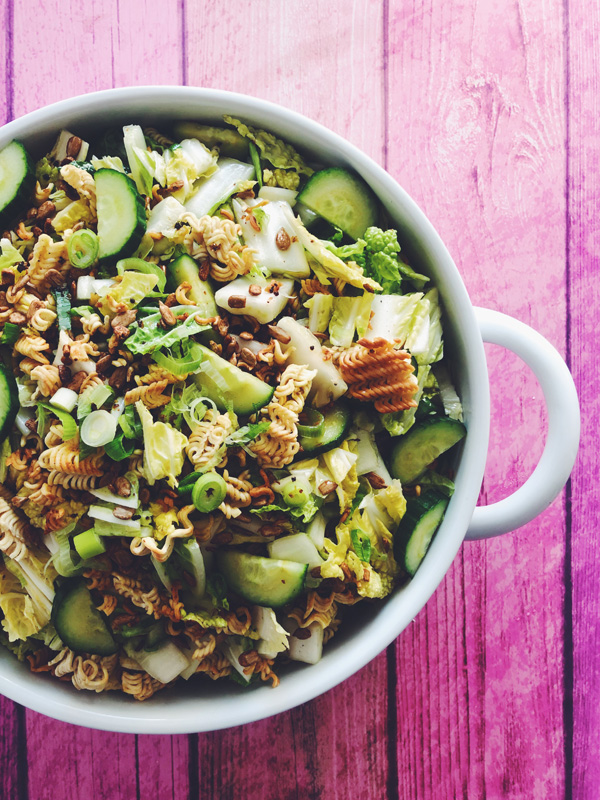 Just break up 2 packets of uncooked chicken ramen noodles and stir fry them with oil and the seasoning packets.

Right before they’re done toasting, add in a cup of sunflower seeds and toast for a minute more.

The combination of all the crunchy salad components and the sweet and sour asian dressing make this salad completely irresistible. 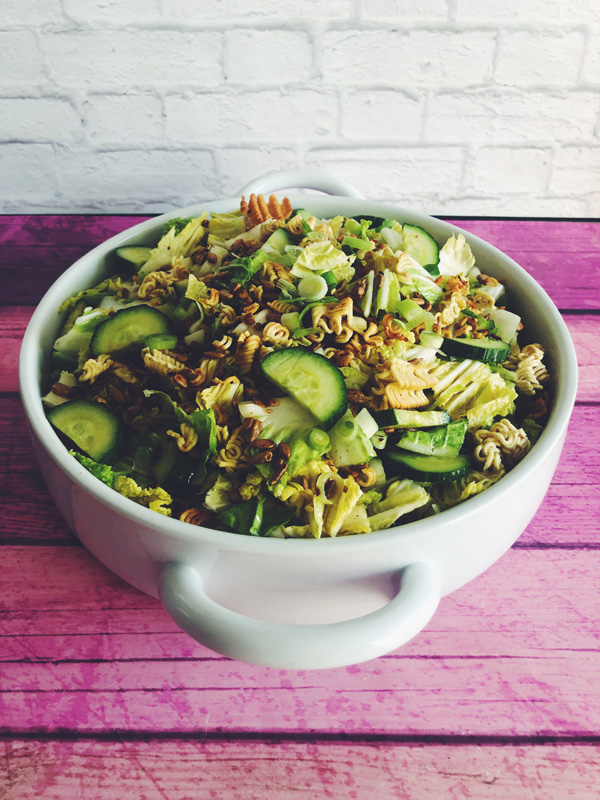 If you’re looking for something to serve this with, try my husbands favorite laab salad or these tasty pho deviled eggs.

If you’re serving it for lunch, you could also pair it with my Ina Garten inspired Chicken Curry Salad recipe or this Thai Noodle Salad.

How to make Crunchy Ramen Salad

You’ll want to start by making the crunchy ramen noodles.

Using the back of your knife, smash the ramen packets until it’s broken up. Open up the packets, remove the seasoning packets and set aside. 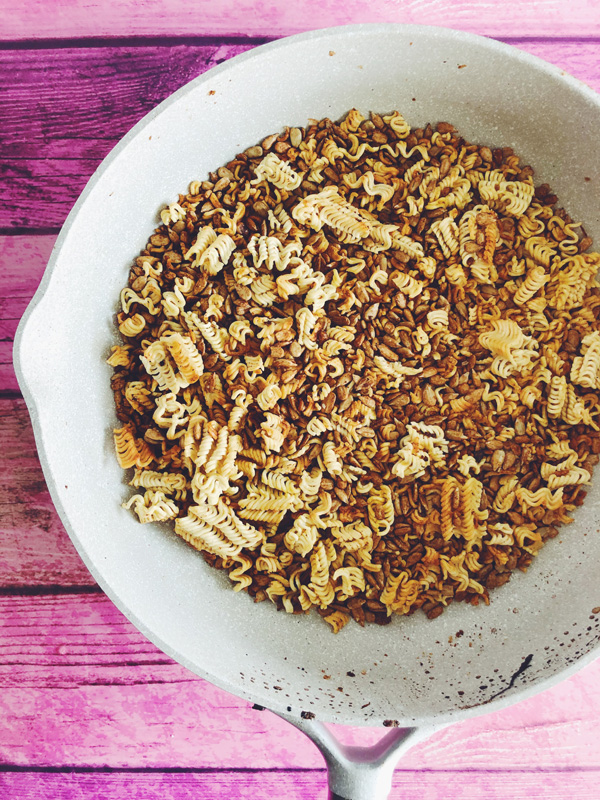 Add the broken ramen to the pan along with the seasoning packets. Toast for about 7 minutes, tossing often, or until the ramen is golden.

Add sunflower seeds and toast for one more minute until heated. Remove the mixture from the heat and set aside to cool.

Shake the jar vigorously until the sugar has dissolved and the dressing is a pale yellow color. Set aside. 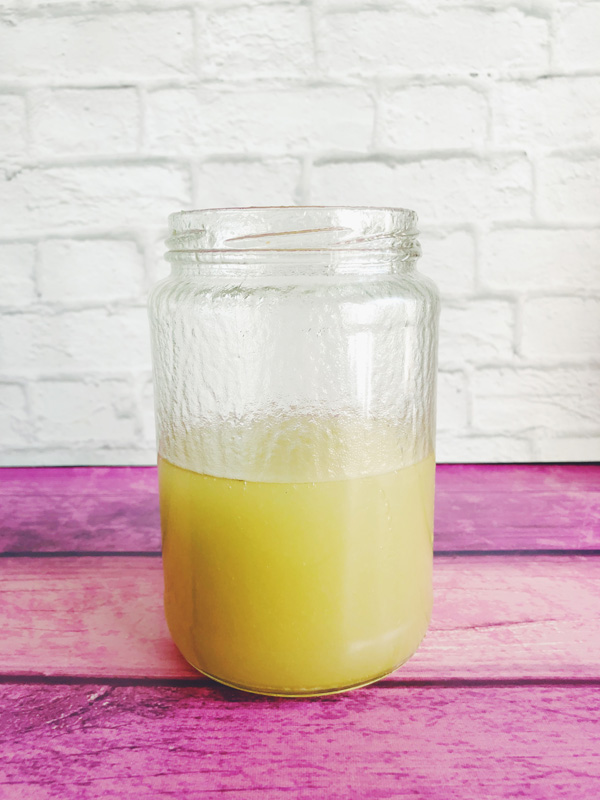 In a large salad bowl, add the shredded Napa cabbage, thinly sliced cucumber and scallions and toss with half of the Asian dressing.

Toss everything together and then add the cooled crunchy ramen bits.

Add about half of the remaining dressing and toss one more time.

Depending on the size of the cabbage, you might use all the dressing or you might not. 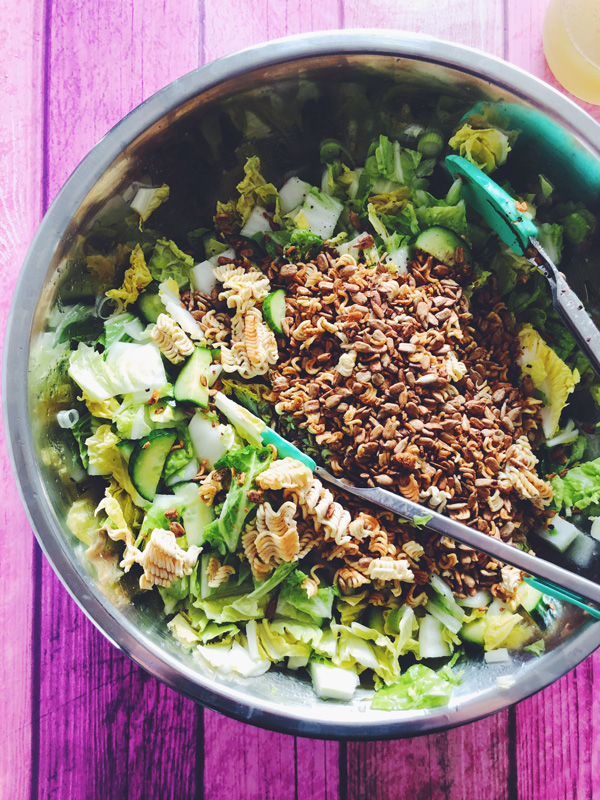 If you have extra leftover, simply pour the remaining dressing in a small bowl and serve it alongside the salad or store it in a sealed container and refrigerate for up to two weeks.

If you’d like to save this recipe for later, pin it below! 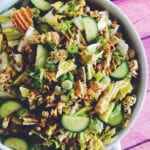 This Chinese Cabbage Salad with crunchy ramen bits is one of those recipes that never gets old. Growing up, it was at every potluck my mom dragged me to and for good reason! Crunchy Napa cabbage is tossed with toasted ramen bits, salty sunflower seeds, fresh cucumber, and scallions. The whole thing is drizzled with an easy Asian Dressing that's downright addicting!
Prep Time10 mins
Cook Time10 mins
Course: Salad
Cuisine: asian, Chinese
Servings: 8 people

For the Crunchy Ramen Noodles

For the Asian Dressing

For the Crunchy Ramen Noodles

For the Asian Dressing

Depending on the size of your head of Napa cabbage, you might have more dressing than needed. If so, either serve remaining dressing on the side or refrigerate for later.
Share
Pin
152 Shares
Previous Post: « Southern Instant Pot Black Eyed Peas
Next Post: Smoked Mac and Cheese »