This Homemade Southern Baked Mac and Cheese is unlike any other! Al dente noodles are smothered with an ultra creamy cheddar cheese sauce and tossed with my favorite quick and easy candied bacon recipe. On top, a crispy crunchy fried Green Tomato Crust is baked right in for ultimate comfort food goodness! 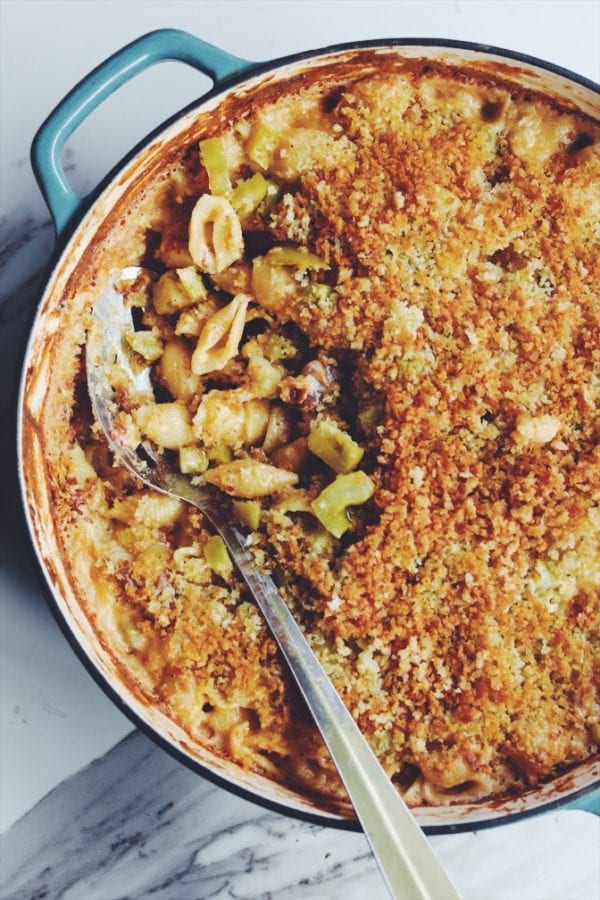 To be truthful, I'm not typically a fan of baked mac and cheese. Often times, i find that the pasta is overcooked, the sauce is bland, and the texture is dry and gross.

But since I'm all about changing my game up, I decided I should give it a try. Inspired by one of my award winning dishes I made a few years ago for a Tillamook Grilled Cheese contest, I decided I'd put my Southern spin on this classic dish.

So what makes this Southern Baked Mac and Cheese different? It's topped with a crispy fried green tomato crust and studded with sweet and savory bits of candied bacon. The cheese sauce is simple yet full of flavor and is baked until bubbly and golden.

It's actually impossible not to love!

How to Make the Perfect Homemade Baked Mac and Cheese

Making the perfect homemade mac and cheese is totally doable. You just need to consider these three factors and then the rest is totally customizable! So whethter you want to use macaroni noodles, bowties or shells or a blend of gruyere, cheddar or blue cheese, this guideline will help you achieve perfection!

How to avoid soggy noodles

If you're making homemade baked mac and cheese, you'll most likely want to take some extra steps to ensure your dish is texturally pleasing.

And to avoid the soggy pasta fiasco, you can use this simple fix. Instead of straining it when it reaches the al dente time frame (usually 10-12 minutes), remove it one minute beforehand (9 minutes).

How to avoid dry cheese sauce

When it comes to perfecting a cheese sauce, it's all about maintaining a rich and creamy mouthfeel. And the fix for this is quite simple, too!

As this homemade mac and cheese bakes, the sauce will undoublably absorb into the noodles. This can sometimes dry out the dish which is no bueno.

To ensure this doesn't happen, all you need to do is make a soupier, more-wet cheese sauce. All this means is that you'll need to add a little bit more cheese and dairy than you typically would with the stovetop variety.

How to get a Crispy Crust on your Mac and Cheese

Let's be real, one of the best parts of baked mac and cheese is the crust! And luckily, achieving that goal is super simple!

To begin, you'll want to grab some panko, butter, herbs and spices.

First, melt the butter in a small sauce pan. Then add in the panko and whatever herbs and spices you want. Toss everything together then pack it on top. I recommend baking it at 400 for 30 minutes. The cheese sauce will be hot and bubbly and the crust will be crispy and crunchy!

If you've been following me for a while, you might remember when I shared my quick candied bacon recipe on one of my episode's of Food Network's Facebook Live. Unlike traditional candied bacon, that's cooked in the oven, mine is made on the stovetop with just a few simple ingredients.

Not only is this method remarkably faster but the cleanup is cut in half, too! So let's get to it, shall we?

I bet you've probably never heard of a fried green tomato crust on a mac n cheese recipe, huh? The only reason that I'm assuming this is because I googled it and couldn't find jack shit! hah!

After researching recipes for Southern baked "fried" green tomatoes, I decided that it would actually be pretty easy to turn this concept into a new way to make a mac and cheese crust.

So, the idea behind this is to chop up the green tomatoes first. Not only does it help them get softer quicker but it makes serving this dish much easier, too!

After adding the chopped green tomatoes on top of the mac and cheese, add your buttery seasoned panko mixture. Once baked, it'll still have the same tang and texture as regular fried green tomatoes.

And if you dont like fried green tomatoes, just leave them out! The crust will still work perfectly on a regular baked mac and cheese recipe! 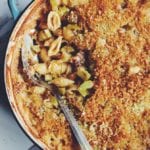 For the Candied Bacon

For the Fried Green Tomato Crust

For the Candied Bacon

For the Homemade Mac and Cheese

For the Fried Green Tomato Crust

Oh, and if you'd like some tasty cocktails to serve with this mac n cheese, check out all of our recipes here!