This lightened up Polish Cucumber Salad is crisp, refreshing and tasty! Traditionally, this salad (also known as Mizeria) uses sour cream and doesn't have tomatoes or onions. However, I wanted something a little bit healthier so I made some adaptions.

Back when I lived near Greenpoint, Brooklyn, we would always get dinner at one of the many local Polish spots that lined the streets.

To be honest, my favorite thing about eating there was always the fresh salads that came with the meal. And the pierogis. Sooo many pierogis!!

And although the real recipe typically calls for sour cream instead of yogurt, I swapped it out and it still tastes delicious!

Traditional this salad also doesn't have tomatoes or onions either but I added them to use up some fresh produce that I had!

If you'd like to get a taste of a real Polish Cucumber Salad, be sure to check out The Polish Housewife for her awesome recipes.

(scroll down for the exact recipe and printable recipe card)

How to make This Polish inspired Cucumber Salad

The first thing that you'll do to make this inspired Polish Cucumber Salad is to slice the cucumbers and radishes very thinly.

Once it's sliced, toss with sugar and salt and set aside.

Let this mixture sit for 20 minutes so the excess moisture is withdrawn.

While the water is being sucked out, let's make the sauce.

Now discard out the excess liquid from the cucumber and radish and pour them in a big bowl.

Add the cherry tomatoes and onion, too.

Pour the dressing over everything and toss.

I think this Mizeria salad is best within the hour its made but you could make it up to a day in advance if you had to.

What to pair with this lightened up polish cucumber salad

Try pairing this lightened up Polish Cucumber Salad with my Pierogi Lasagna with apples, caramelized onions and spinach!

It would also be delicious with these Hawaiian Roll Turkey Cheddar Sliders or these Tampa Style Cuban Sandwiches!

Save this Mizeria recipe for later

If you'd like to save this Lightened up Polish Cucumber Salad for later, I got you! 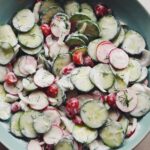