Funeral sandwiches are one of my favorite southern specialties. Salty ham, nutty swiss cheese, and a tangy dijon brown sugar butter glaze is baked into fluffy Hawaiian rolls. They're basically upgraded ham and cheese sliders with a brown sugar dijon caramelized crust and they're completely irresistible!

This past Christmas, I went to an oyster party at one of my oldest friends houses.

His name is Nick Pilato and we've been besties since 6th grade.

Not only do I think of him as the person who got me into good music... but his parents showed me a ton of new things, too.

His dad, originally from Rome, was the first person to feed me bucatini all'amatriciana.

And his mama, a true southern belle from Alabama, opened my eyes to cheess olive balls and these tasty funeral sandwiches.

For over 15 years, his family has been throwing their famous oyster parties. It's one of my favorite holiday traditions that gives me all the nostalgia!

But since i've been allergic to oysters my whole life, I've never been able to indulge in the zillions of oysters that they shucked.

Luckily, his mama always has her famous funeral sandwiches on hand. And even if they're not specifically for me, I feel like they are!

So what are funeral sandwiches? Well they're basically Southern ham and cheese sliders that are baked in a brown sugar dijon sauce.

When the sauce bakes, it caramelizes into a sweet and tangy crust that's out of this world.

The sandwiches are hard to explain. They're sort of wet, sort of crispy but they're so dang addicting that you can't eat just one.

Oh, and you definitely don't need a funeral to make these sandwiches! They just call them that because they were once laid out for church spreads during funerals.

You might also notice that the majority of funeral roll recipes require you to soak them overnight.

But with this recipe, you only have to soak them for one hour... or up to 24 hours.

This flexibility means that the funearl rolls can be prepped last minute or a day ahead of time which is great for party prepping.

What to pair them with

Funeral sandwiches are also a great way to use up leftovers from my crock pot brown sugar pineapple ham!

As for sides, I recommend serving them with some of this perfect white cheddar mac and cheese, instant pot black eyed peas, or this southern pimento cheese potato salad!

Or if you'd like another amazing ham sandwich recipe, try this English Ploughmans Sandwich or this Eggslut Breakfast Sandwich!

The only thing you need to take into consideration is how much time you have.

This recipe requires at least one hour of marination if you're in a hurry.

If you have more time, even better! You can also soak them overnight for the same delicious results.

Next, split the Hawaiian rolls in half and then pull them apart.

Place the bottom half of each bun in the baking sheet.

Then, layer on half of the cheese, all of the ham, and then the remaining half of cheese.

Place the upper half of the buns on top and drizzle with the remaining brown sugar dijon sauce on top.

Just make sure you coat the bread equally and evenly!

If you'd like to use the optional poppy seeds, be sure to sprinkle them on at this point.

Now tightly wrap the buns with plastic wrap and refrigerate at least one hour up to overnight.

When you're ready to bake, preheat your oven to 350F degrees and unwrap the buns.

Place the funeral sandwiches in the oven for 15-2o minutes or until the top is golden brown and the center has heated through.

The funeral rolls will be crispy yet slightly soggy in the best way possible!

And if you'd like to save this funeral roll recipe for later, pin them below! 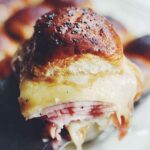