This Southern Potato Salad is loaded with crispy bacon, pimento cheese and sweet pickles. It's easy to make and full of flavor! It's the perfect side dish for all your summer barbecues!

With fourth of July right around the corner, I wanted to gift y'all this creamy and rich Southern Potato Salad with Bacon and Pimento Cheese!

So what do you serve it with? I recommend eating 100 hotdogs and doing a huge party spread with my favorite Instant Pot Rib recipe! And since i feel like these go hand in hand, you should also totally make my Mom's Hawaiian Macaroni Salad, too!

If you're looking for a cocktail to pair it with, why not try my sunrise Rum Punch. It's perfect for hot summer days. Or you could even get a little more creative and make Epcot's famous avocado margarita! It's rich and creamy and so refreshing!

How to Make Potato Salad

Making this Southern Potato Salad is a cinch.

To begin, fill up a pot and add quartered potatoes. The small, slightly waxy potatoes with thin skin are best.

When they're soft, strain them and stick them in the fridge to cool.

When the potatoes are cool, toss them in the mixture and let this southern potato salad sit in the fridge for at least 30 minutes before serving! Enjoy.

How to Make The Best Potato Salad 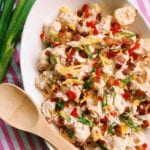