This smashed brussel sprouts recipe is straight up perfection and doesn’t require any parboiling or steaming. It’s a one-pot side dish that’s much less complicated than the others! In this easy recipe, crispy bacon and salty parmesan cheese are baked right on top to create a crunchy crust that’s completely divine. Vegan instructions also included!

I've been seeing crispy smashed brussel sprouts all over the internet and knew I had t make my own version!

And since they're made by yours truly, you know it's going to be covered in delicious cheesy goodness!

A crispy parmesan cheese crust topped with crunchy bacon to be exact!

But unlike the rest of the recipes on the internet, I made mine much less complicated.

Instead of blanching or boiling first, I completely skipped that part because guess what?! You don't need to do all that!

And anyways, who needs to wash an extra pot and pan these days... Am I right?!

These are baked and finished in one pan which makes life a little easier.

Oh and if you want them without cheese and meat, I've included the vegan recipe, too!

It's even easier and just as tasty -- especially when you toss them with fresh lemon juice and some cracks of black pepper!

If you'd like some more tasty side dishes to serve it with, I've got you covered!

How to make Smashed Brussel Sprouts in One Pan

Making smashed brussel sprouts doesn't have to be overly complicated!

A lot of recipes call for parboiling or steaming the sprouts before smashing... but that's totally avoidable!

Simply roasting them and smashing them 20 minutes in, does the trick perfectly!

So to begin, Preheat your oven to 400F degrees.

Next, wash and clean your brussel sprouts. Be sure to trim or pluck any browned leaves.

Now add the whole cleaned brussel sprouts to a 12" oven-proof pan like this one by cuisinart or a regular steel baking sheet.

Toss them with olive oil and salt until each one is coated evenly.

Place them in the oven and bake for 20 minutes, shaking the pan halfway through. This helps the sprouts to brown more evenly throughout the surface.

After 20 minutes, remove the pan from the oven and place on a solid surface.

Using the bottom of a clean can or coffee mug, carefully smash each brussel sprout.

Once each sprout is crushed and flattened, top with a half cup shredded parmesan cheese and 3 pieces of diced bacon.

Place the pan back in the oven and bake for another 25 minutes.

At this point, the bacon will be crunchy and the parmesan cheese will create a perfectly crispy cheesy crust.

How to Make this Recipe Vegetarian-Friendly

If you'd like to make these crispy smashed brussel sprouts vegan, it's super easy!

Follow the instructions as-is and when it's time to add the cheese and bacon, simply skip that part.

Stir the sprouts and toss them so that the other parts have a chance to brown and get crispy.

Then put the brussel sprouts pan back in the oven and roast for another 15-20 minutes.

At this point, they'll be crispy and golden brown.

Remove them from the oven and let rest for 5 minutes.

If you think they need a little more flavor, simply squeeze some fresh lemon on top and hit it with a few cracks of fresh black pepper. 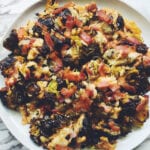 This smashed brussel sprouts recipe is straight up perfection and doesn’t require any parboiling or steaming. It’s a one-pot side dish that’s much less complicated than the others! In this easy recipe, crispy bacon and salty parmesan cheese are baked right on top to create a crunchy crust that’s completely divine. Vegan recipe is also included in the notes!
Prep Time3 mins
Cook Time45 mins
Course: Side Dish
Cuisine: American
Servings: 4 people

If you’d like to make them vegan, just skip the parmesan and bacon, toss once more and cook for an additional 15-20 minutes. When they're done, finish with lemon juice and fresh pepper for more flavor!
Share
Pin
« Smoked Mac and Cheese
Cheesy French Onion Twice Baked Potatoes »