This Butternut Squash Mac and Cheese with Bacon and a Crispy Sage Crust is one of my all time favorite recipes. Not only did I win Food Network's Guys Grocery Games with it but it's been a family favorite for almost 2 decades. It's creamy, rich, slightly sweet, super cheesy and out of control delicious! In my opinion, it's the absolute perfect Fall mac and cheese recipe!

This butternut squash mac and cheese means the world to me.

My Uncle Bro, who has since passed away, used to make it every single Thanksgiving.

It was (and still is!) my favorite dish in the entire world. I would literally fill my entire plate with it while leaving a tiny amount of room for veggies. And as always, I'd skip the turkey because I'm a weirdo like that.

It had everything that i loved. Carby goodness, sweet braised butternut squash, thick cut bacon, and a lusciously rich cheese sauce that sticks to your ribs.

On top, a perfectly crispy and herbaceous sage infused crust to contrast the chewy gooeyness underneath.

And when I competed on Guy's Grocery Games the first time, I knew I had to make this dish.

During the episode, I had to show off my cheesy knowledge so I added A BUNCH of different cheeses to make this recipe for the cheesiest way I could.

But since you probably don't want to spend $50 on cheese, I'm sharing the way that I make it at home! And trust me, it's still just as delicious and it won't break the bank!

Oh and if you haven't seen the episode, I ended up winning $16,000 because of it and have been on the show many more times after that!

So yeah, this mac and cheese is definitely a winner!

If you're wondering what to pair it with, try my honey sriracha glazed carrots, my turmeric roasted cauliflower salad or this tasty roasted broccoli dish with herby garlic tahini sauce!

And if your family likes the less adventurous recipes, then try this classic white cheddar mac and cheese recipe that's sure to please!

To begin, chop 1 lb of bacon and add to a heavy bottomed braising pan.

Cook over medium heat and cook, stirring often, until the fat has rendered out and the bacon is crispy.

Once the bacon is cooked, remove it and set it on a paper towel then strain out half of the fat.

Add in a finely diced sweet onion and scrape up the bits that are stuck to the bottom of the pan. Cook down for 5-10 minutes or until it's lightly caramelized.

Next, dice a large butternut squash and add it to the caramelized onions. Top it with 1.5 cups of water and bring to a simmer.

Put the lid on the pan and braise the squash for 10 minutes or until the squash has softened.

Now that the squash is cooked, remove about a cup and a half of the butternut squash mixture. Don't worry, this will be added back in later so that there's still chunks of squash in the finished product.

Now add 2 cups of heavy cream and a couple pinches of salt and stir everything together.

Now it's time to blend the cream and the squash mixture together.

I recommend using an immersion blender because you can just stick it right in the pan and hit power without having to get another dish dirty. But if you don't have one, you could use a regular blender or a large food processor.

Which ever way you choose to blend it, blend the sauce is smooth and creamy! Now turn the heat back to medium and let the sauce simmer until it's reduced and thickened.

Now stir in the cheese, little by little, until it's all incorporated.

I recommend using Roth's Grand Cru because it's one of my favorite cheeses EVER! Think of it like an American-made gruyere cheese. If you can't find it, regular gruyere will work perfectly!

Now stir in the mustard and add the reserved butternut squash mixture and the bacon and season with salt and pepper.

Stir in the cooked pasta and season with salt and pepper.

How to make the Crispy Sage Crust

First, melt 2 tbsp of butter in a nonstick skillet over medium heat. Then add in the chopped sage and cook for 1 minute.

Now add in the panko and continuously stir until the the topping is golden brown.

Before adding the breadcrumbs on top of the mac and cheese, make sure to taste it then season with salt and pepper if needed.

Can I make this Ahead of Time then Bake it?

Absolutely! You'll notice how thick and creamy the cheese sauce is which makes it absolutely perfect for baking!

Because of this it won't dry up and lose it's flavor.

Just make sure to cook the noodles al dente so they don't turn to mush while baking!

To Bake from Room Temp

Simply prepare as directed and pour into an oven proof baking dish but DO NOT TOAST the panko.

Once you get to the bread crumb stage. Melt the butter over medium heat then add the chopped sage. Remove it from the heat and toss the panko around in the bread crumbs so they soak up all the butter - do not let them toast though! Taste and season with salt and pepper.

Now pour the butter soaked panko on top of the mac and cheese mixture then turn your oven to 375 and bake until golden and crisp! 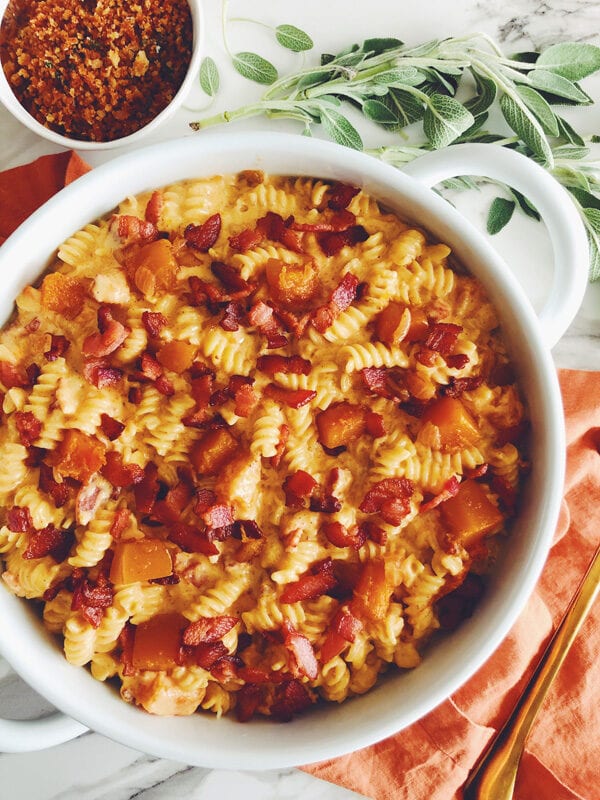 To Bake it After it's Been Refrigerated

To make this ahead of time, simply prepare the mac and cheese as directed but do not move onto the crust phase. Then put it in an oven proof baking dish then cover and refrigerate until ready.

Once you're ready to bake it, Preheat your oven to 350F. Remove the mac and cheese from the fridge and cover the dish with tinfoil. Bake for 30 minutes to an hour or until it's heated through.

This is all dependent on how deep your baking dish is. If it's wider with more surface area, it'll be quicker than a smaller, deeper casserole type dish like the one I'm using in these pictures.

During the last last 20 minutes, melt the butter over medium heat then add the chopped sage. Remove it from the heat and toss the panko around in the bread crumbs so they soak up all the butter - do not let them toast though! Taste and season with salt and pepper.

Place the butter soaked bread crumbs on top of the mac and cheese and bake until golden-brown! 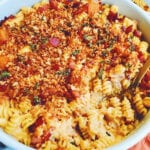 This Butternut Squash Mac and Cheese with Bacon and a Crispy Sage Crust is one of my all time favorite recipes. Not only did I win Food Network's Guys Grocery Games with it but it's been a family favorite for almost 2 decades
Course: pasta
Cuisine: American
Keyword: asian pasta salad, bacon, butternut squash, cheese sauce, fall, mac and cheese, sage, thanksgiving

For the Crispy Sage Crust

For the Crispy Sage Crust