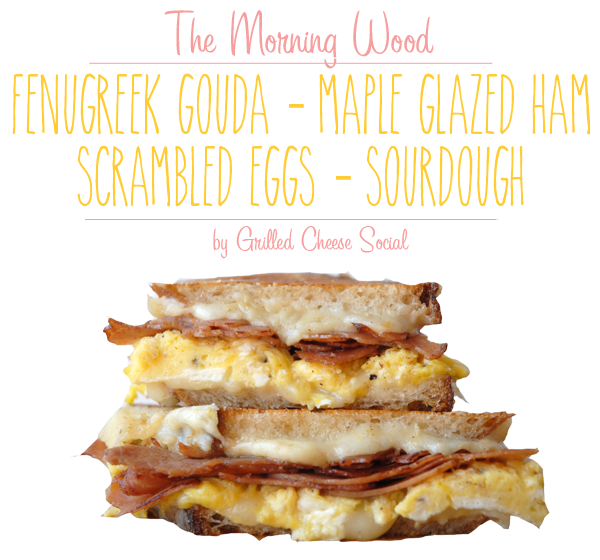 When I was in high school I was bad news. But not bad as in like that one crazy bitch that cursed out her teachers and then tried to make out them OR that one hot mess that keyed your car when you pissed her off – Nah, I was bad in the sense that I would constantly take advantage of my poor sweet Momma… like ALL THE TIME. You see, my mom is what I like to refer to as a food-pusher  She gets joy out of feeding people and more than anything, she absolutely loves to make you something if you tell her you’re hungry. I totally used this to my advantage and so did all of my high school homies.

I was a few years younger than most of my besties so I always had the earliest curfew. To me, it was fine because getting home at midnight was never an issue, especially when everyone knew how much my mom loved feeding them. The rule was, when I got home I’d have to walk upstairs and give her a little kiss goodnight (which I now refer to as the breathalyzer of death). But honestly, I wasn’t really into drinking back then and instead I partook in a little puff-puff-pass activity that totally made me and all my friends hungry as the lost boys in that one scene of peter pan.

When I’d go upstairs to let her know I was home, she was ALWAYS waiting up for me awake. 2/3 times she would walk downstairs in her pajamas and would give everyone a hug and ask them “Hey y’all, are you kids hungry?!” WELL DUH MOM, of course we were hungry! We’re growing teens and we just spent the last few hours in some crappy little punk rock venue, with cored-out apples and tinfoil sculptures by our sides, complaining how we had no money and nowhere to eat. My mom was (and still is) the shit! She’d totally fulfill our deepest desires and would make giant bowls of homemade mac n cheese, super stuffed omelets, and of course, some insane-o grilled cheese sandwiches. Most of the food she prepared was southern breakfast themed which is awesome because what’s more fun than breakfast for dinner… the second time around?

Dudes, I’m being seriously when I say she really knew how to make us happy.

And I don’t think she ever really knew how high excited to see her we were, but I’m so lucky that I had the nicest mom on the block. Whenever I visit FL, I still hear stories from people about her late night cuban sandwiches and her biscuits and gravy. It was truly amazing and I like to think that this is where I developed my “need to feed”. And now that I’m 27 and can bring my own special friends back to my place at all hours, I still like to partake and make insane midnight meals. This little sweet and savory breakfast sandwich was inspired by her. It’s got maple glazed ham, Wisconsin’s famous Marieke fenugreek gouda and soft scrambled eggs all grilled between two buttery slices of sourdough. You gotta do it next time you’re up really late. Believe me. 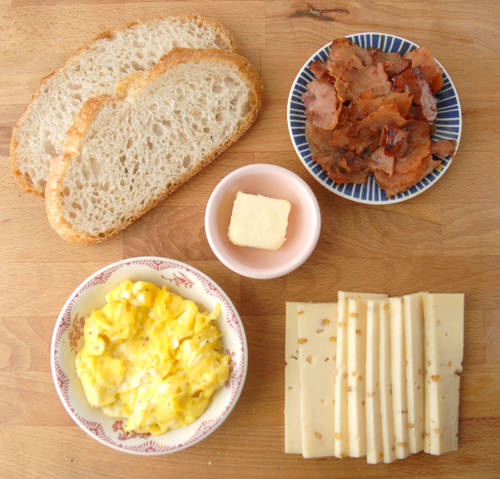 So if you’re like what the hell is fenugreek gouda, let me share! Ya know that fake maple syrup that’s like $20 cheaper than the real stuff? Yeah? Well, the fenugreek seed is used to make that! See those little seeds? Well they look and smell just like maple syrup and they act as little bursts of maple flavor. Ever had a McGriddle? Well Instead of little pockets of maple syrup – this Wisconsin cheese has little clusters of syrup-y goodness that’ way better and way less disgusting than whatever the hell McDonald’s tried to do.

So now that I’ve talked you into this issue – pile some onto a slice of bread! 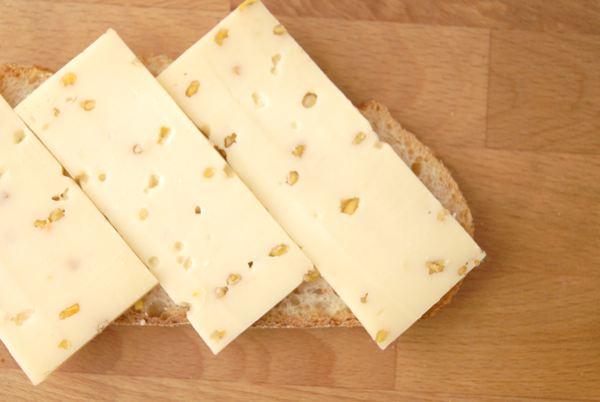 Now add some scrambled eggs. I tried to keep mine pretty soft so they didn’t get tough when I grilled the sandwich at the end… So yeah, I’d recommend doing that. 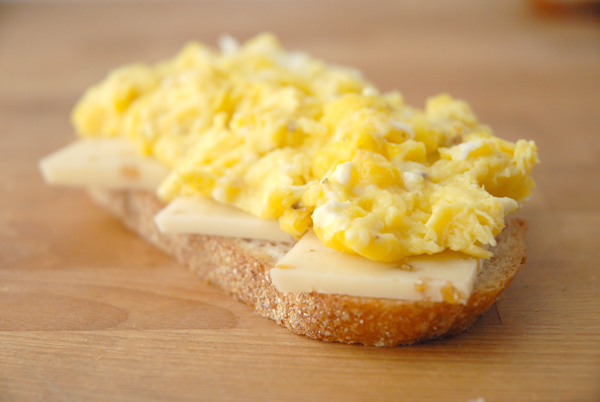 Now add some maple glazed ham! To make this – I just took some sliced honey ham, started to fry it up in a cast iron skillet, added some REAL maple syrup and basically just cooked it down until it was all absorbed into the ham. It’s sweet and salty and oh so fucking good! 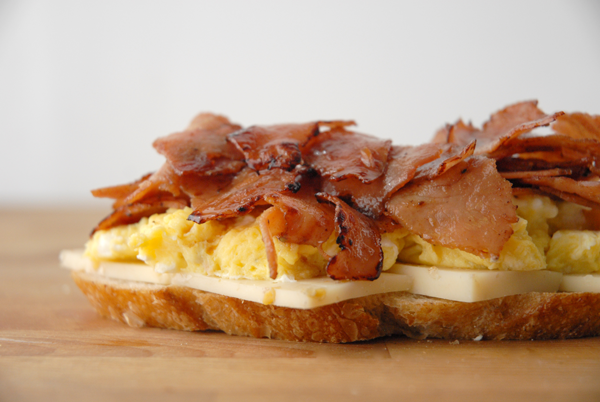 Now add some more of the gouda and the top piece of bread. Butter that baby up while you’re at it! 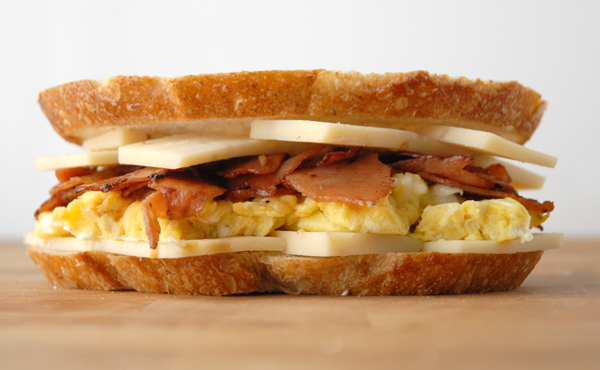 Place your sandwich in the frying pan and turn the heat to medium. Cook this GC for a few minutes on each side until it looks like a grilled cheese. Try to flip it minimally, it’ll help it stay together better! 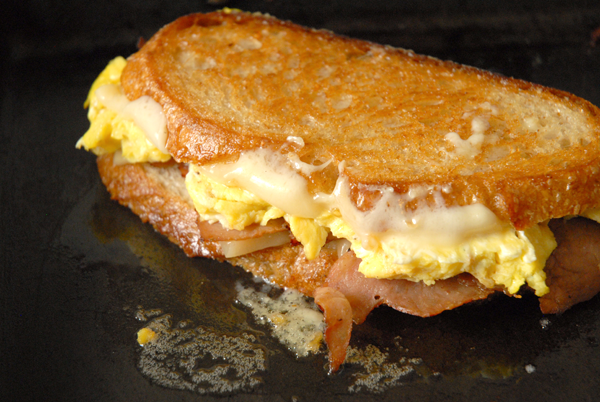 After a few minutes, it’ll look all familiar and you’ll be like “OMG can i just eat it now?” and I’ll be like “Nah dog, you gotta let it rest for a minute so that the cheese has a change to breathe and everything gets glued all together and it won’t fall out all over the place!”

Then we’ll grab some wine glasses and we’ll pour ourselves some of that good good stuff from St. Francis Vineyards. Maybe a zin since it’s the morning and it’s sort of sweet like juice? Just an idea…? 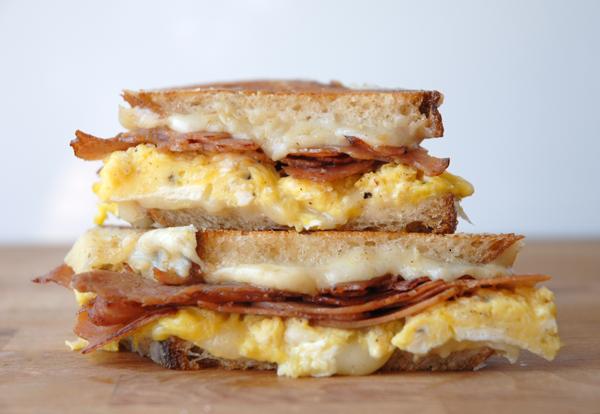 So next time you want to impress a new buddy the morning after or in the middle of the night, whip up this bad boy. It’s sweet and savory and is like a grown-up non-gross version of a McGriddle. Yeah, I said it. Whatever.