You are here: Home / Recipes / Breakfast Recipes / The Wayfarer – Caramelized Onion Cheddar, Pulled Pork and Pickled Jalapeno Grilled Cheese
It’s about that time of year again when summer’s coming to an end and you can finally stop worrying about how your thighs look like in your Levi cutoffs and the sweat that might be lining your upper lip. Soon, cool breezes will be wafting the smell of steaming-hot dog piss off the streets of New York and being hungover in the train station won’t automatically mean that you’re going to throw up from the putrid scents that have been marinating below the sidewalk.
And even though I can’t wait for it to cool down, I will miss all the good things that come with summer. Particularly, escaping the city and the long drives to the beach while inaudibly blaring Beat Happening through busted-out speakers, and the hilarity that ensues as my friends yell at each other when we get lost on the BQE. I’ll miss being able to blame my greasy bangs, 4-day pony tails, and my sweaty back on the sweltering heat that makes me too lazy to do keep up with my own cleanliness. There’s also the “it’s too hot outside to even leave the apartment” excuse when I just want to be a hermit for five days in a row that I’ll miss. And of course, there’s the “I’m blowing all my money because I just want to have fun while I still can and not think of anybody but myself” logic that I won’t be able to use anymore.
Which reminds me, I’ve got to come up with some new weather-based excuses for Fall.
But most importantly, I’m sad to say goodbye to rooftop barbecues and getting day drunk in the sun. I won’t miss when I accidentally take a swig of gin from a mysterious water bottle that’s left over in my backpack from park parties that have filled my Sundays. But anyway, as a goodbye to sweet, sweet summertime, I’m saying farewell and metaphorically smashing this grilled cheese up against a yacht to bid adieu to a summer that has surely had its ups and downs. And what better way to send off this season than with a grilled cheese that encapsulates the sweetness, the burn, and the crispiness that came along with these last few months. Sweet and smokey barbecue, hot and spicy pickled jalapenos, , and rich and creamy caramelized onion cheese that’s all grilled between a smashed hamburger bun is what it’s all about. So yeah, peace out summaaaa time. 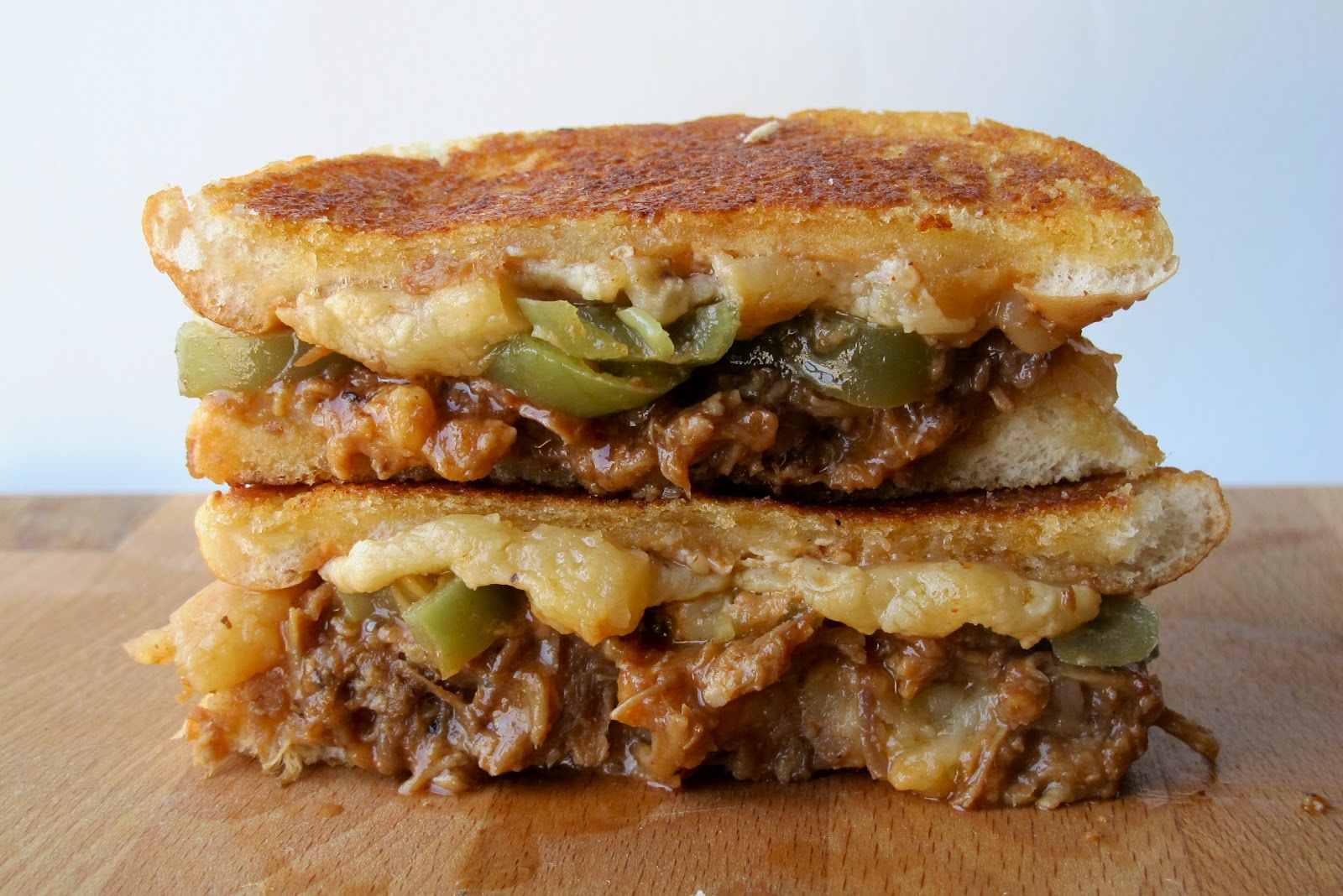 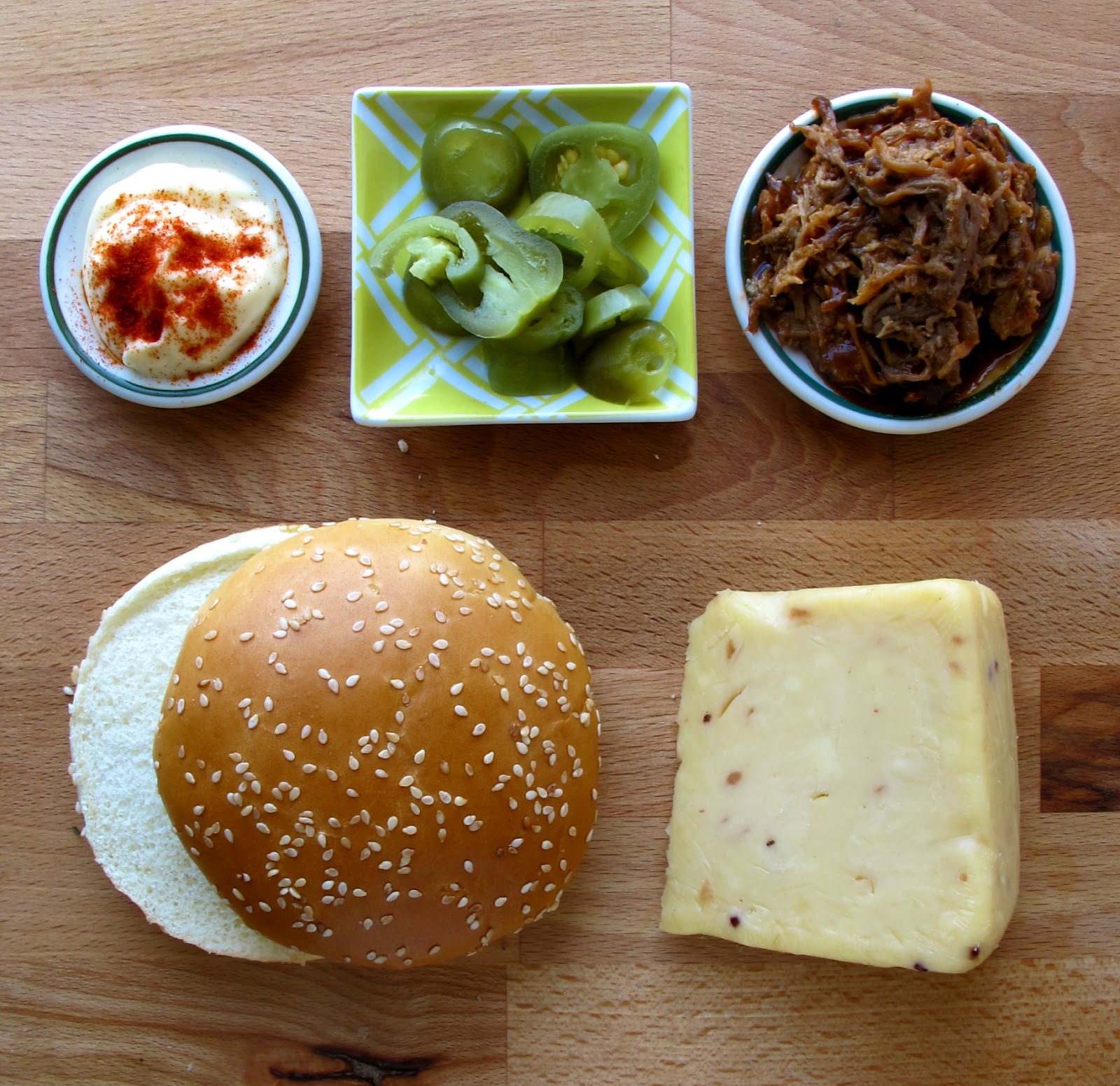 To get the best, most crispy crust from any sort of bun, the trick is to turn it upside down. Since the crust on most bread won’t get all crispy and delicious when grilled, this method allows you to get the same results as if you were using sliced bread. It’s kind of like perfecting the perfect summer tan when you’re drunk. You’ve got to remember to flip over or else you’ll get these crazy wayfarer sunglass tans that are not hot. Which actually has nothing to do with grilled cheese but is very important to remember.

To begin, stack the cheese onto the seeded side and bottom side of the bun. And I can’t move on without talking about this cheese. I’m not normally a fan of flavored cheeses – because let’s be honest if you are when you’re in my industry you’re looked at like a kook if you even mutter your acceptance of flavored cheeses – but this cheese is soooo dank! It’s sweet and salty and there’s actually little nubs of caramelized onions in there. AH! It’s so good, I want to make a million grilled cheeses out of it. Be on the lookout for a French Onion Soup grilled cheese when you can actually be in your kitchen for 15 minutes without getting heat exhaustion. 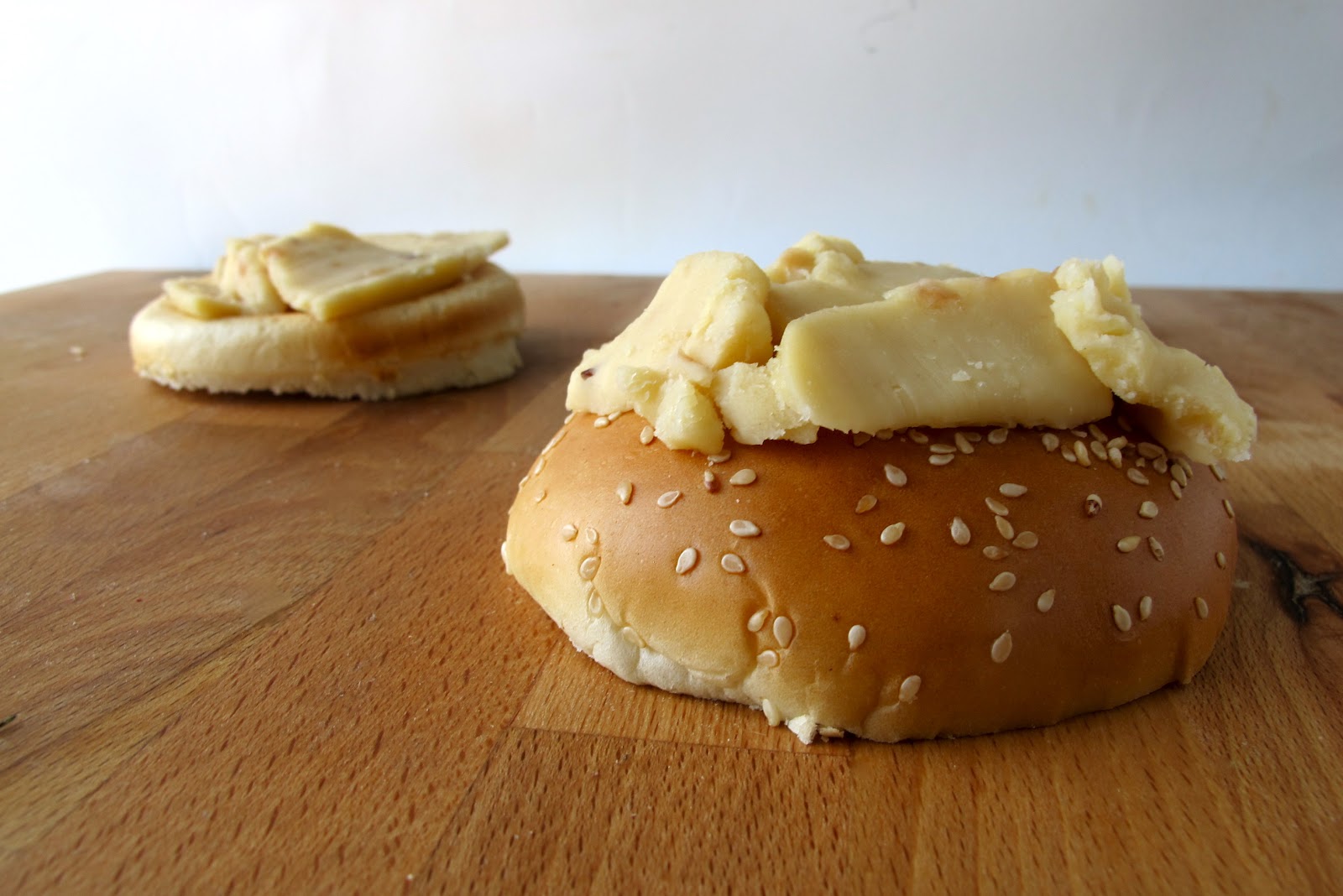 Now slop on some pulled pork. If you’d like to make it yourself, I think you’re awesome because I will never be found manning a grill, (you can find me making gatoritas by the a cooler) but I do recommend using this recipe from my homies at Saveur Magazine. Or if you’d like to do it my way, just use leftovers from your favorite BBQ joint.

What’s my favorite BBQ spot you ask? Well that would totally be Fette Sau in Williamsburg. Not only do they have amazing meats, but they also have the largest American Whiskey selection in New York and that’s something that I’ve blown too much money on I’m obsessed with. And if you’re a Southerner living up here it’s also the place that you can find Cheerwine! 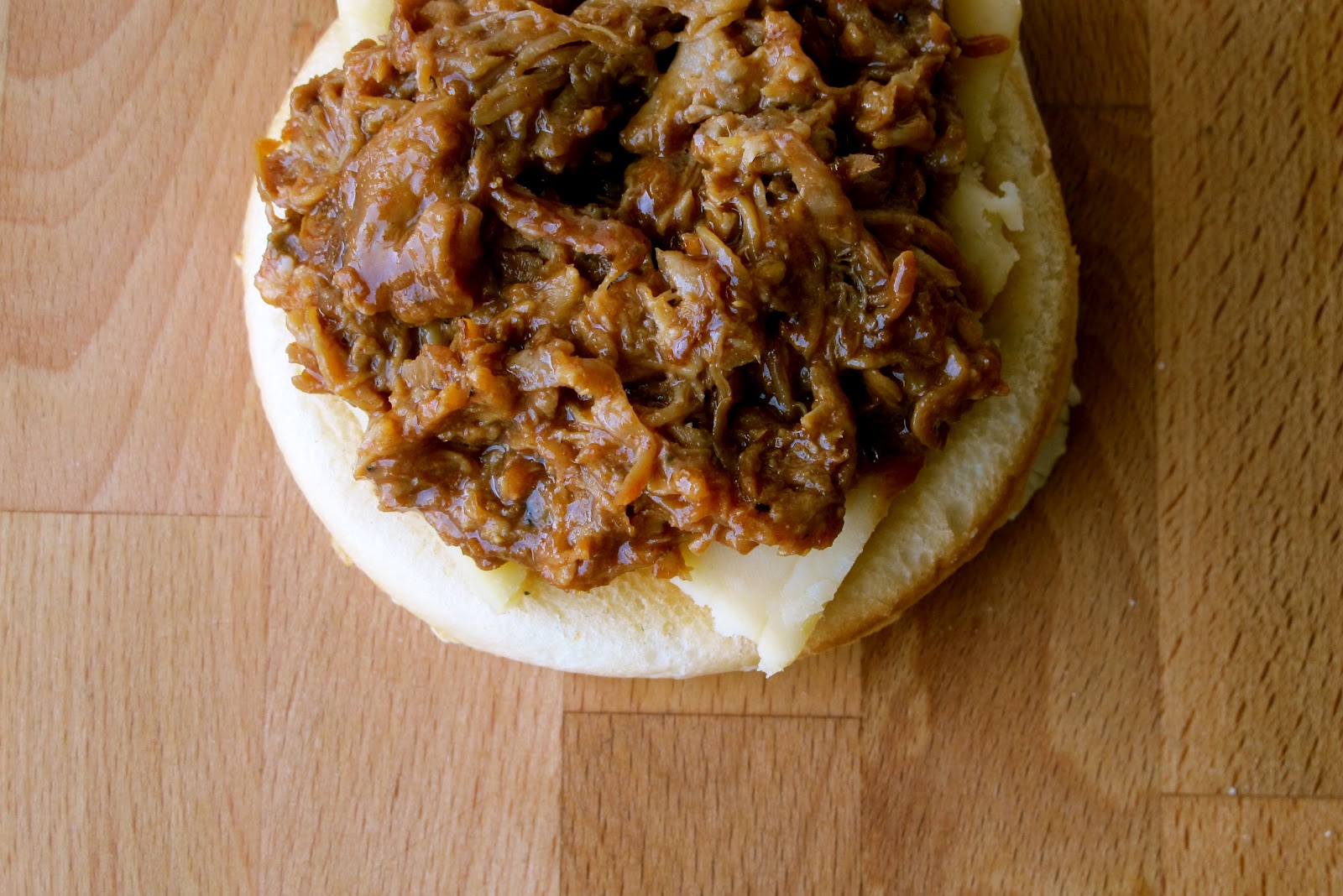 Then it’s time for the pickled jalapenos. I love these little sweet and spicy bites of awesomeness so I go kind of crazy with them. If you’re not a heat lover, then I’d recommend chopping one single jalapeno ring up and gingerly sprinkling it on top of the meat. But if you’re obsessed with pain while eating….errrr….I mean spicy foods, well then I’d tell you to follow my lead and cover every square inch of pork with these bad boys.

What’s a summer without a little burn; whether it be emotional or dermatological. 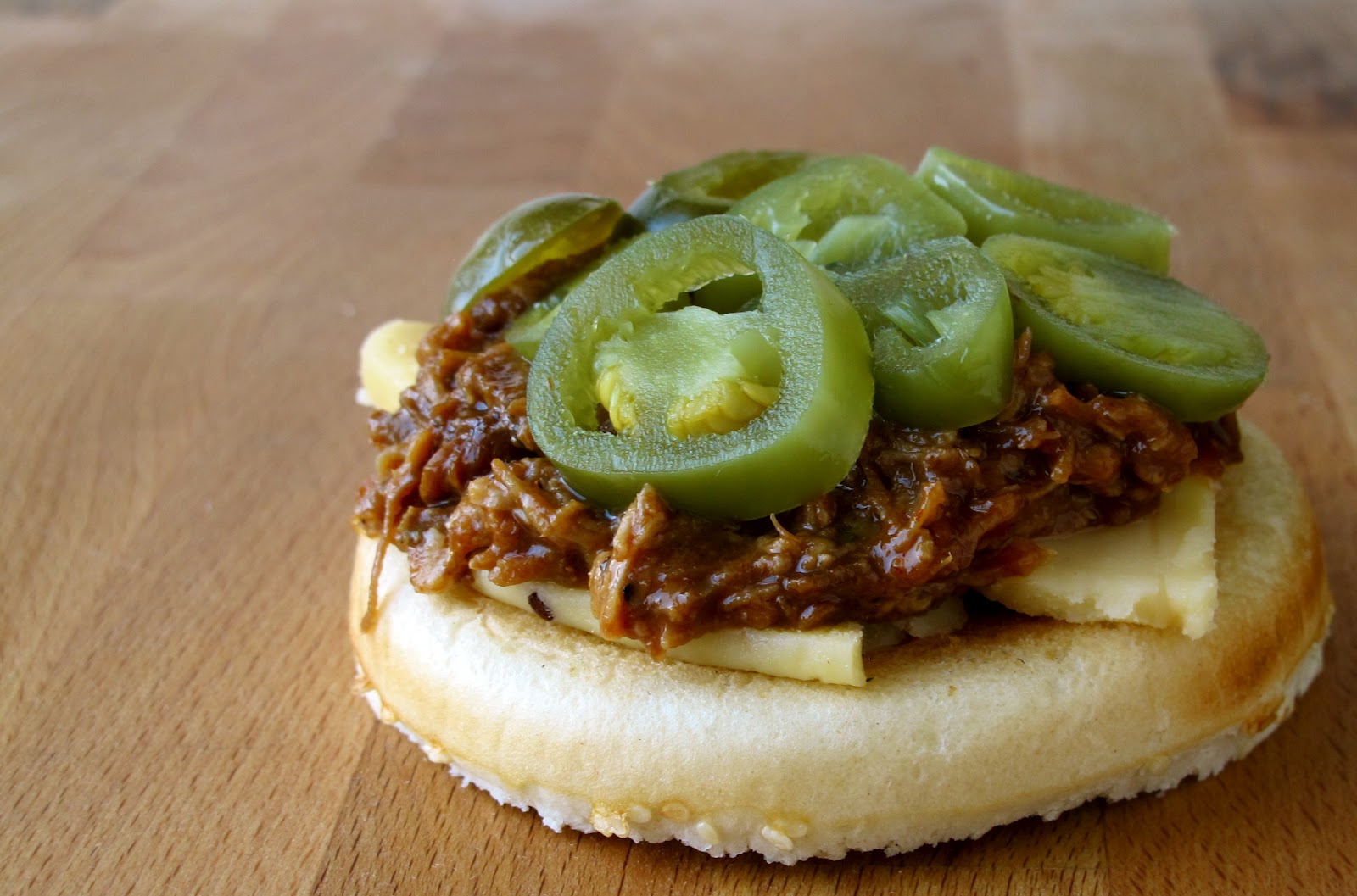 Next, put the other side of the bun on top and smear it with some mayonnaise and a pinch of smoked paprika. I know that using mayonnaise may sound a little absurd – especially coming from me, but I’ve changed a lot this summer. I actually like this stuff now! Not only does mayo have a higher burning point than butter, but it also makes a crust that is crispier and le
ss greasy than the lube that normally goes with grilled cheese. Trust me and do it. 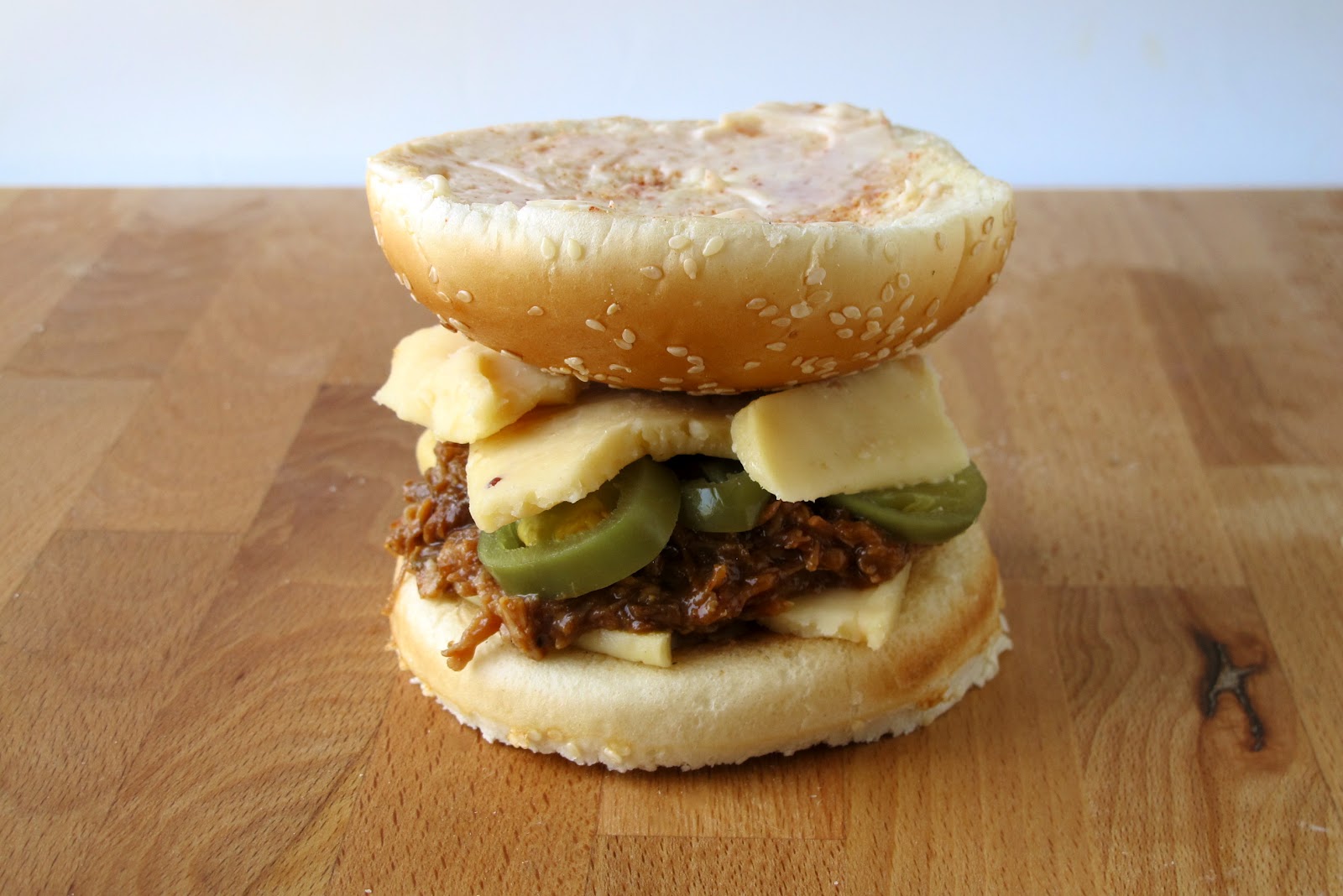 Once it’s built, place your creation, mayo side down, on your grill pan and turn the heat to medium. Let it cook for a bit until the crust starts to look like the picture below. When it’s about that time, mayo and paprika the other side of the bun and flip it. Repeat, ya dingus! 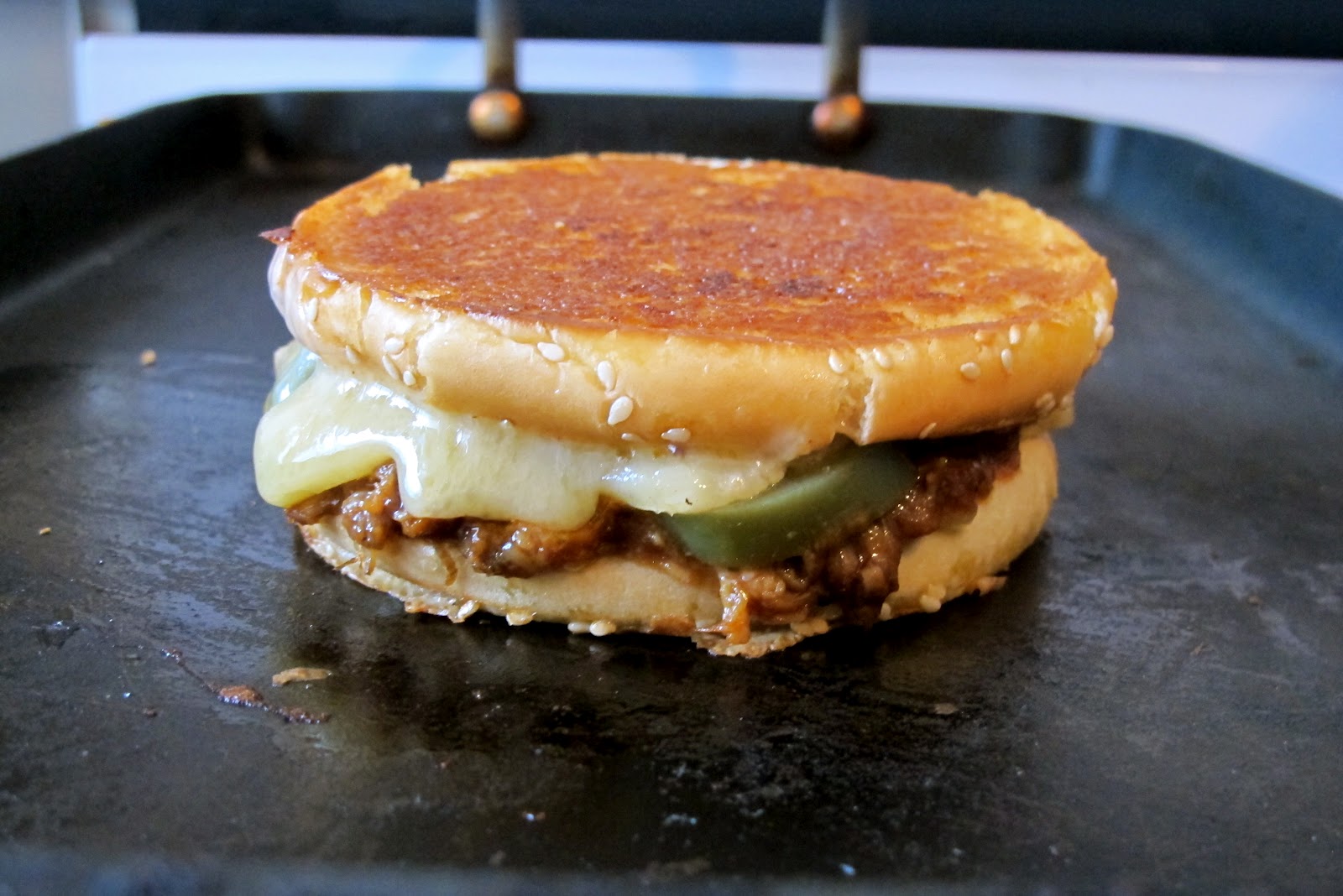 After it’s evenly golden-brown on each side, take it off the stove-top and let it rest for a few minutes. If you’re hungover and you’re reading this, walk straight to the kitchen and cook a sun-side up egg and place it on top. I’ve done this before and believe me when I say it cures a hangover, especially if you abide by Anthony Bourdain – who I rely on for hangover advice.

If you’re not feeling winters approach, just think of all the cute boys (and girls) in sweaters and knitted beanies and all the comfy winter clothes that don’t cling to your skin and reveal all those unsightly dimples bodacious curves that my blog has probably attributed to. Until next time, soak up those rays and have an awesome week.