×
Warning, this post may sound like some sort of "dear diary" thing but I'm going for it. So eff off.

For me, the worst part about breaking up with someone are the succeeding morning-afters. Maybe it's the first split second of consciousness that happens when you wake up and roll over, only to realize that a certain someone isn't there anymore. Or maybe it's the lonely walk to go get coffee by yourself that makes you want to crawl in a boy-less hole and die. I'm shuddering at how emo I'm being as I write this, but dating in New York sucks. It does. And I know that I don't normally talk about relationship stuff on this blog, but ya know what? I just turned 26 and the thought of having this blog for three years and not documenting one single failed relationship just seems like some sort of big mistake.

I'd been with this dude for a few months and things were rad. Because of him, I'd started drawing again and I really did feel this explosive wave of pubescent boy horniess creativity - which was really wonderful and super fun. I bought a sketchbook for the first time in two years and have half-way filled it up already! We even had ridiculous pet names for each other; Critter (me) and Creature (him). C'mon! Cute city USA with us as the weirdo mayors ruling our own little freak show. Most of all though, I really loved having someone to make breakfast for on the reg. He'd make the ONE cup of coffee, (which at first I thought was rude but then loved it because he said he liked splitting it with me. Goober.) and I'd scour the fridge to try to come up with the yummiest morning meal I could think of.

It's been a few weeks now since we ended things and mornings are definitely a lot easier but let's be honest, they still suck. Maybe it's that I don't like sleeping alone or that I should take down his shrunken head drawing that he made me during breakfast one morning that sits right above my light switch. Or maybe it's the fact that we work on the same block so there's this impending doom that lingers over me when I head to North 3rd and happen to see his cute scruffy face that doesn't kiss mine anymore. Oh my god, I can't believe I'm writing this. What am I doing? I've never been this sappy in my whole life. I'm not a Best Coast type of gal. Maybe this is why I shouldn't write about dumb man-boys.

Anyways, let's change topics before I make everyone throw up. To make myself feel better, I've been cooking up some awesome breakfasts to cope with sad sappy mornings. This one in particular has been quite the life saver. A buttery toasted crumpet, taylor pork roll, tater tots, and gooey melted colby jack get all hot and crispy together in this GC. Plunge this carb-centric sammie in some hot sauce and you won't be thinking about anything but the flavors that are making your brain melt for at least a few minutes while you woof it down. 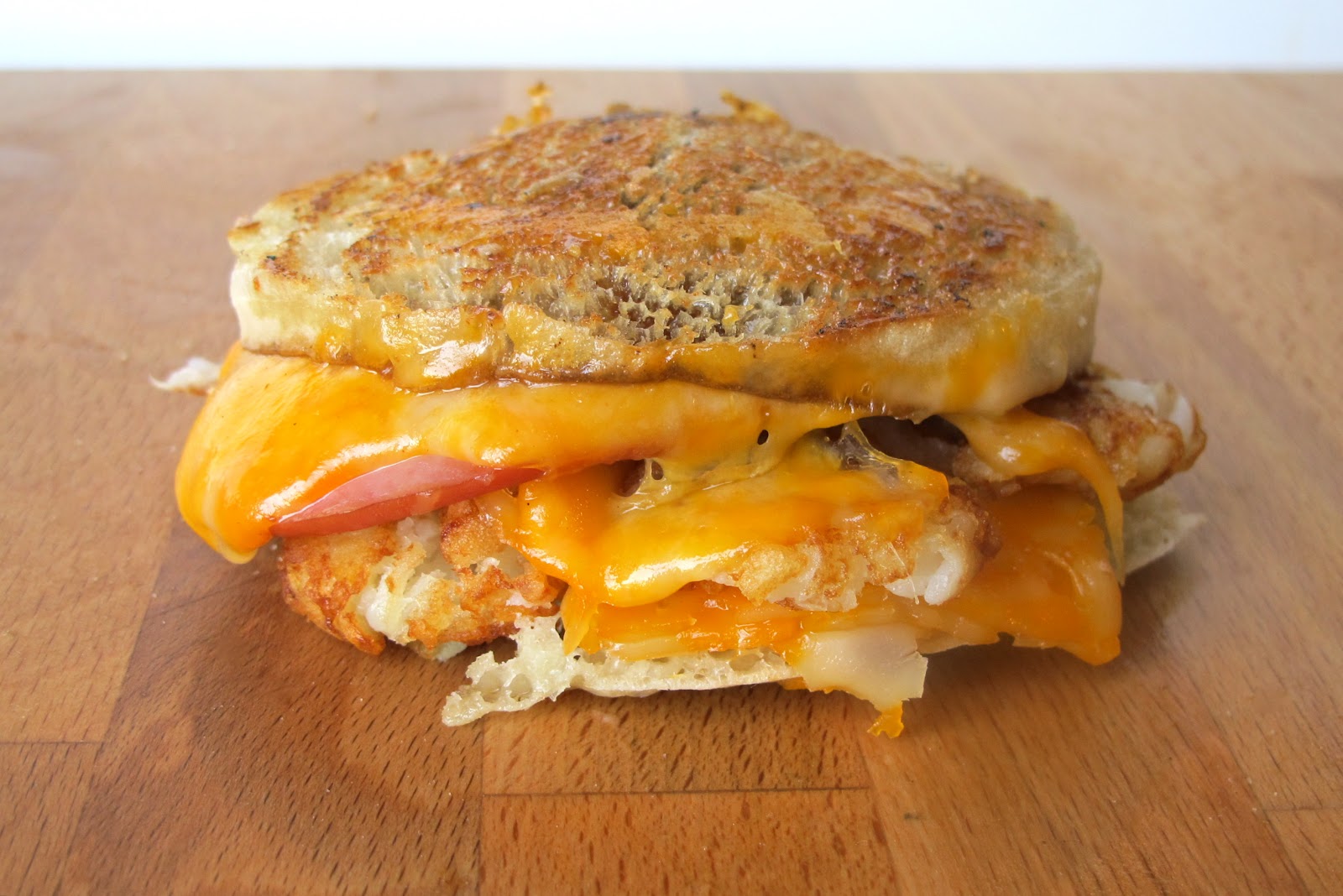 Here's what you'll need to make this break-up-and-feel-better-sandwich. 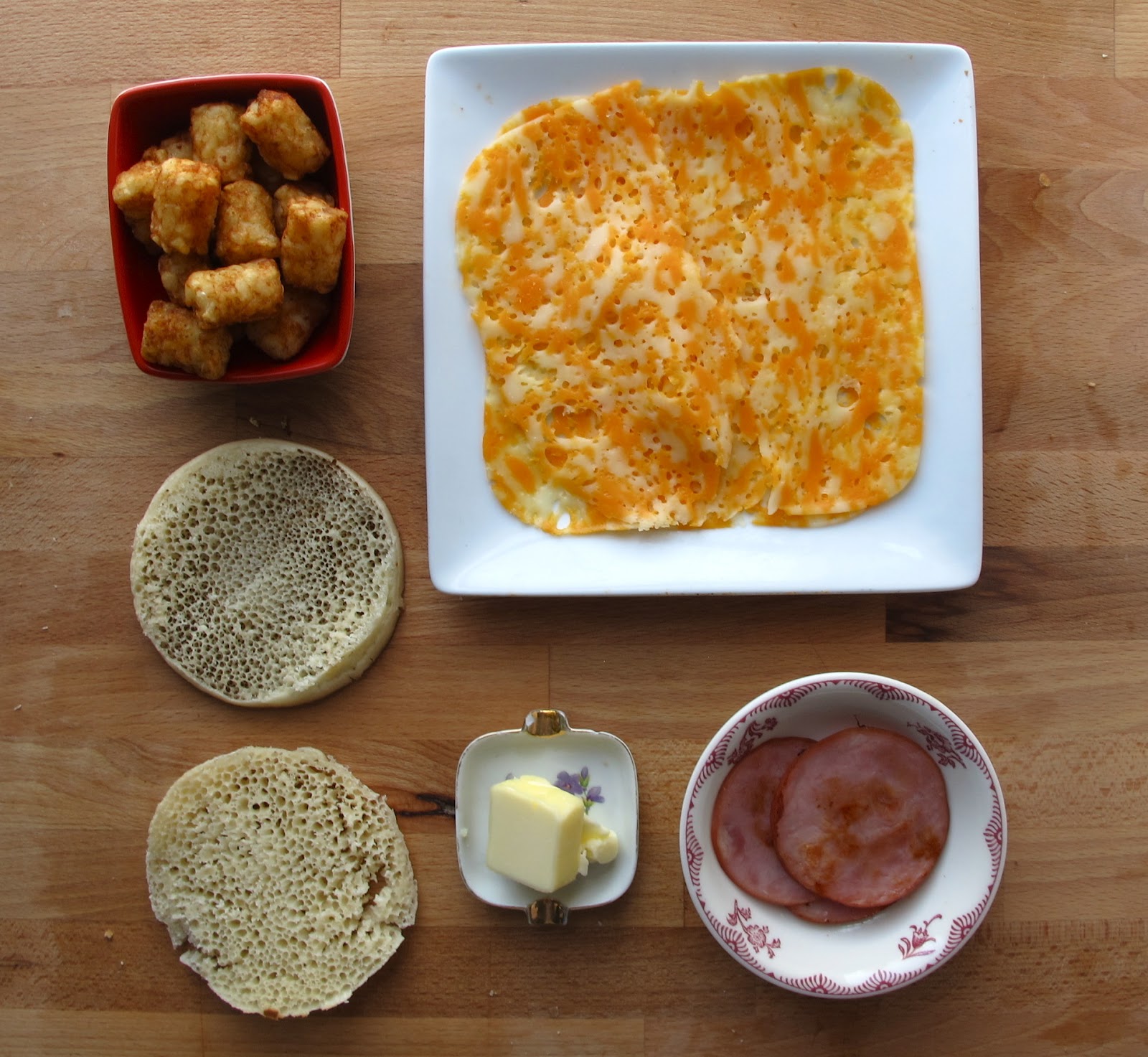 To begin, fry that pork right up! If you're anything like me, being newly single means you just lost 10 pounds so you can eat what-the-hell-ever you want. Just heat your griddle to high and throw on the slabs of succulently salted swine. When it's all crisped up, take it out of the pan but don't clean off that grease, ya dingus. You'll want to savor save that and use it when you're ready to fry up your grilled cheese. Yes, we'll be using pork fat to enhance this fat daddy. Because why not? 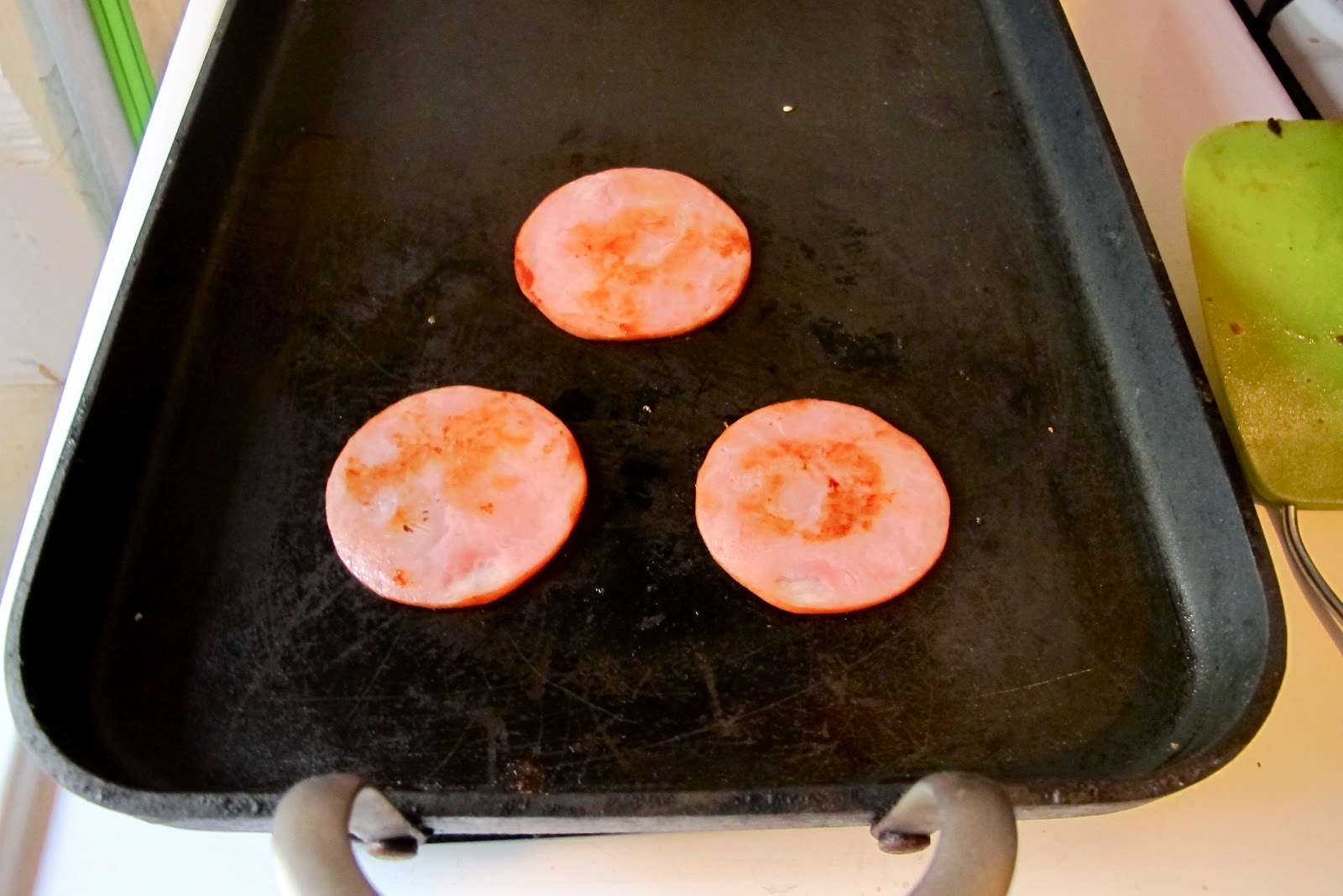 This is the hardest part, beyond realizing that you're going to have to spend a lot of time slamming shots of tequila and talking to douche bags at crappy, loud bars before you find your next suitable man. Very carefully, I repeat, very carefully slice your crumpet in half. They're really delicate, just like your emotional stability, so take your time with this step. Think of it as some sort of zenned out cutting therapy. I don't mean like a borderline personality cutting therapy type thing, but kitchen therapy - which I think is the best thing, EVER.
Once they're cut, use my little flipping inside out method and turn them upside down. Then pile on the cheese. Lay it down, thick. Remember, there's nothing like getting under someone that makes getting over someone easier eating a ton of cheese to heal the heart. 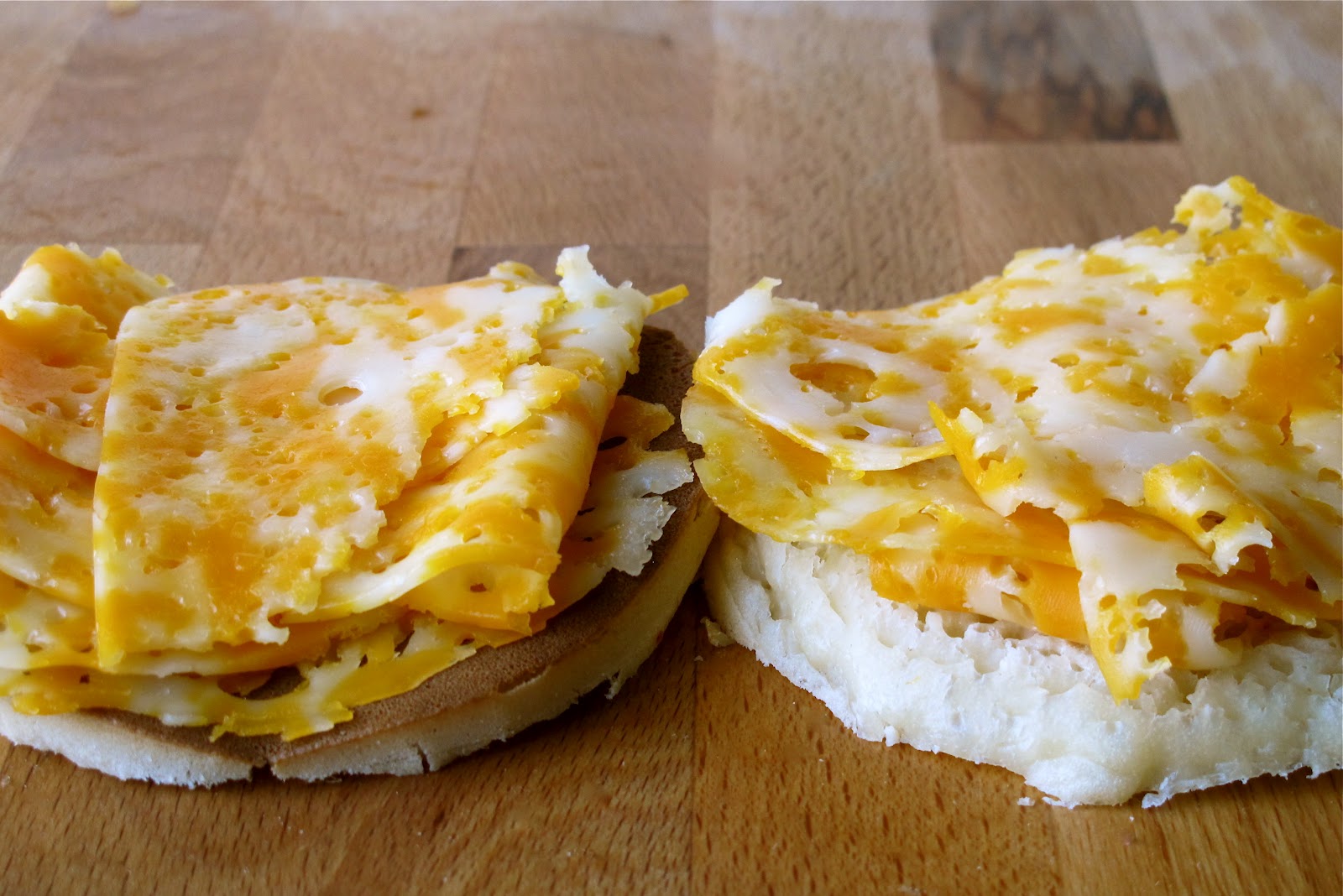 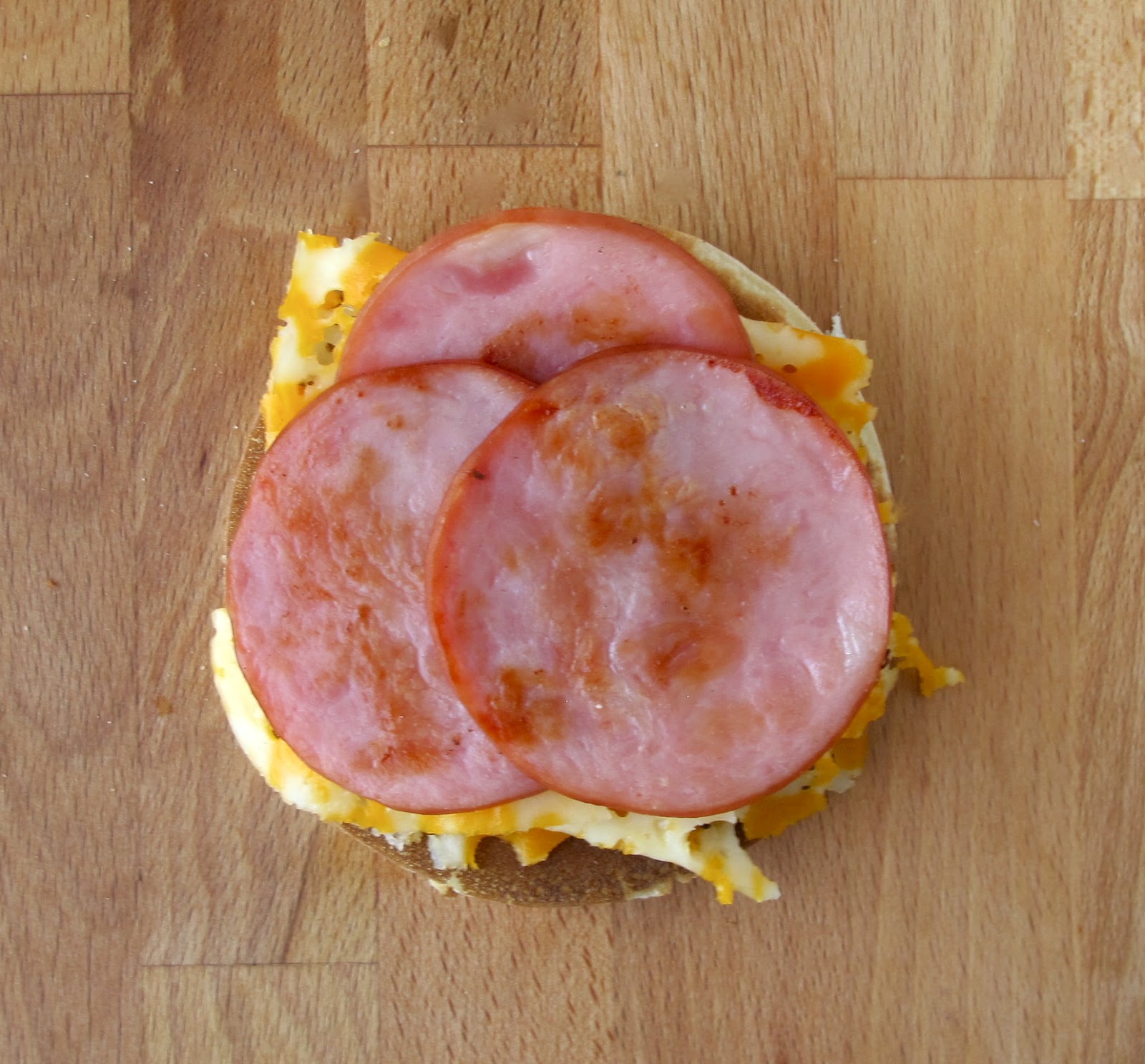 Top it with some crispy tater tots and smash them with your fork. This is the cathartic part, believe me. And you won't look like these idiots if you do it my way. 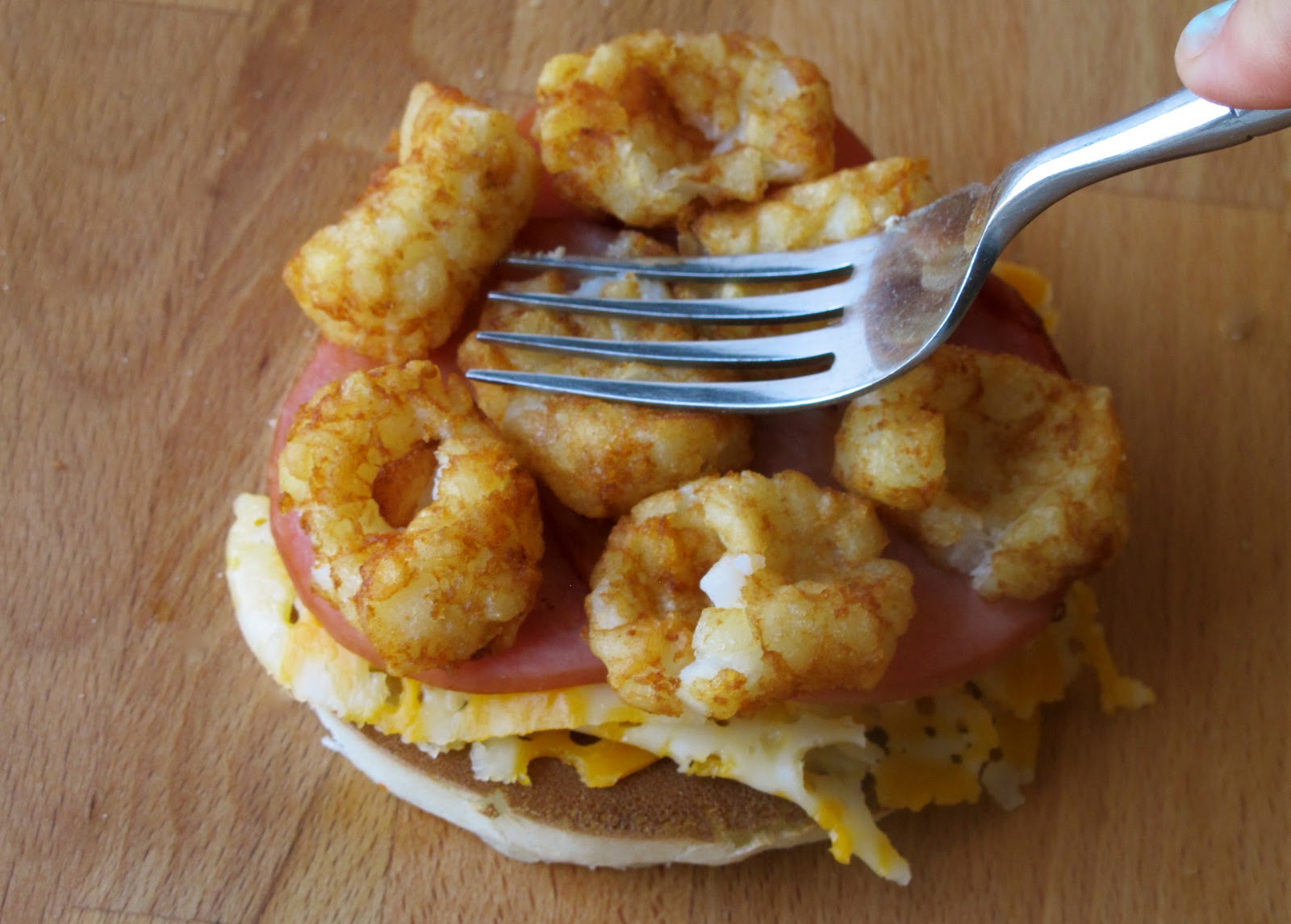 Place the other piece of the crumpet back on top and take a second to look at the beautiful creation you just made. Pat yourself on the back, put on some red lipstick, and blast some Bikini Kill. Remember, don't waste your time crying over a man-boy. As my friend/co-worker/unintentional therapist Leanne, put it "What would Kathleen Hanna do?". Go with that mentality for as long as you can, just don't go all Lorena Bobbitt with it. And definitely don't play any Best Coast. Don't do it. Actually, just delete it off your iTunes now. 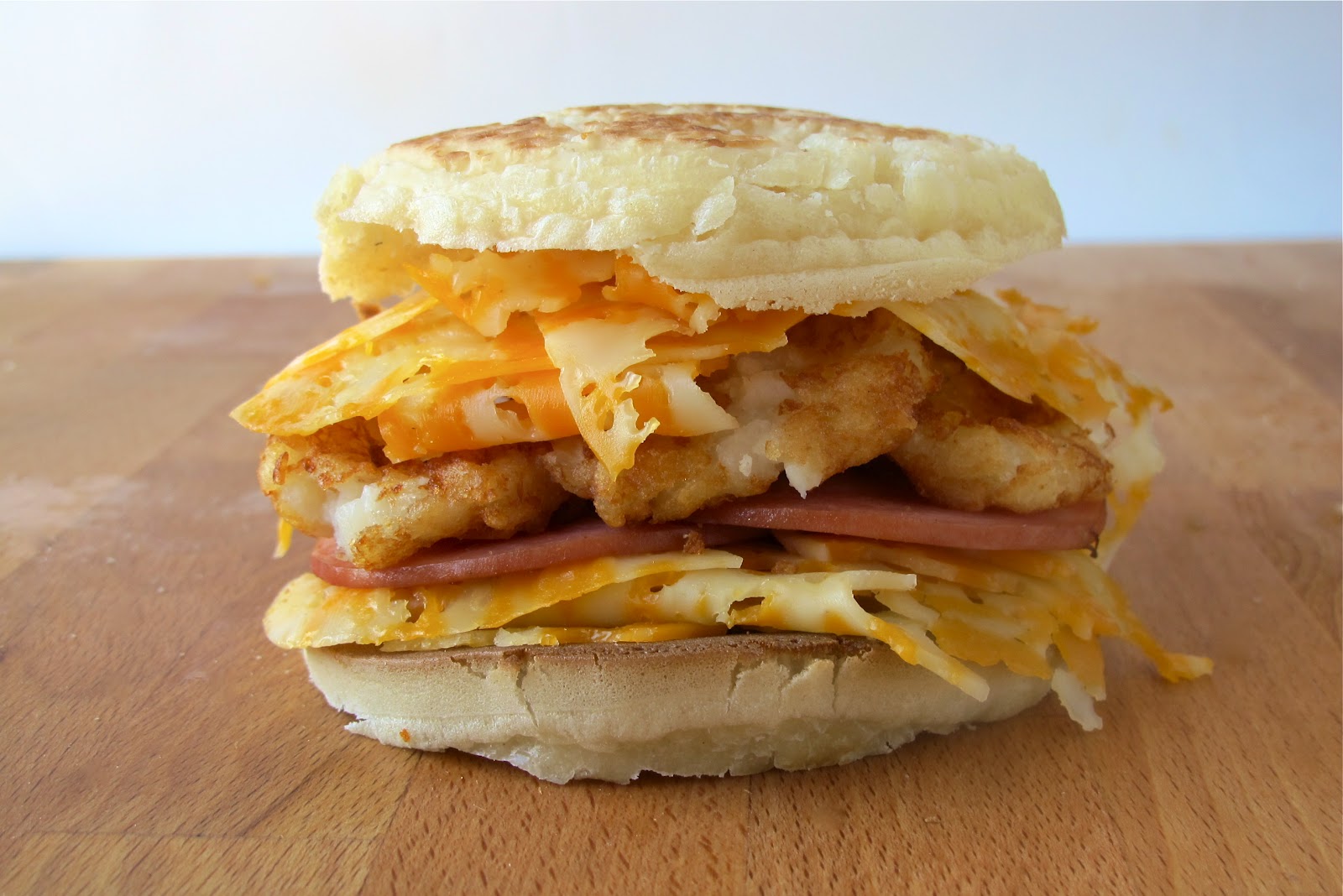 Something happened when I was doing this shoot and I forgot to take pictures of it grilling. Maybe it was the moment when I realized how freaked out my roommates were when they saw me dancing around my kitchen with a butcher knife and spatula, blasting some overly loud fem-punk.
But basically you'll put some butter in the skillet and turn the burner to medium. Let it cook for a few minutes until the cheese starts to splurge out of the crumpet holes and creates a nice cheesy crust. So good. When it's ready to flip, do it super gingerly. There were a couple disasters that happened when I was testing this recipe, but even if they fail and fall apart (God, is everything an analogy in this post?) they'll still be delicious afterward.

When it's done let it sit for a few minutes and then sop it up with some super spicy hot sauce and dig in. Enjoy the burn. It'll make you appreciate your next relationship bite a lot more.