This Cast Iron Meatloaf recipe has been passed down to me from my mom! It's super easy to make and incredibly moist and delicious! And best of all, it doesn't have to be made in a cast iron - but it does make it extra delish! This dinner recipe has been a staple in my family for my whole life so I hope you enjoy it as much as we do!

My mom's cast iron meatloaf is such a total winner.

It's legit taken me my whole life to finally figure out her recipe.

Every time I've ever tried to make it, I've ruined it. It just wasn't the same. THERE WAS ALWAYS SOMETHING MISSING!

So I'm so excited to say that I finally forced her into recipe testing with me!

Don't get me wrong, I love it but for some reason, I just could not get her recipe right and it was driving me insane!

But now, we've gotten her measurements sorted and my husband is in heaven!

Ever since we started dating, he has requested my mom's meatloaf at least once a month.

To be truthful, he even had a part in his wedding vows about promising to like my food more than my mom's... which has always been hilarious to me.

Because let's be real, he likes my mom's recipes better than mine and I'm A-Ok with that! Hah.

And before I begin, let's just acknowledge how ugly it is because I am not used to sharing ugly food.

But as David Chang says, it's great to be Ugly Delicious!

Making my Mom's Cast Iron Meatloaf is super easy! And I only say this now because I finally forced my mom into actually recipe testing her signature meatloaf!

Ok, so here's what you do. And you'll see, it's SUPER simple!

Next, grab a big bowl and add all ingredients to it.

Use your hands to mix it up so that the spices and stuff are all evenly distributed throughout.

Just be careful to not over-mix it. The heat from your hands will melt the fat which leave you with a dense and dry loaf!

Once everything looks combined, add it to a greased cast iron skillet, bread pan, or shaped into a loaf in another oven safe dish.

The cast iron skillet I use is 10 inches but any size can work as long as you adjust cooking times so that the center reaches 160-165F degrees.

Ok, so now pat the meatloaf into shape and add a drizzle of ketchup on top.

At this point, you'll notice a ton of grease around the loaf, so carefully pour it out and discard.

Then turn the broiler on for another 5-10 minutes or until the ketchup on top caramelizes.

Let the meatloaf rest for about 15 minutes so that it stays moist.

We serve with more of the spicy barbecue sauce for dipping.

And that's it!! It's pretty ugly but it's SO DELICIOUS! It's my husbands favorite food!

But you could also switch it up and pair it with these new 15 minute air fry breakfast potatoes or even my spin on a classic 1905 salad!

Some steakhouse creamed spinach or some old fashioned candied sweet potatoes would also be delicious!

How to save this recipe for later

To save this cast iron meatloaf recipe for later, simply hover over any picture and click pin it button!

Or you could scroll down to the bottom and click "print" on the recipe card! 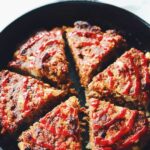 This Cast Iron Meatloaf recipe has been passed down to me from my mom! It's super easy to make and incredibly moist and delicious! And best of all, it doesn't have to be made in a cast iron - but it does make it extra delish! This dinner recipe has been a staple in my family for my whole life so I hope you enjoy it as much as we do!
Prep Time10 mins
Cook Time1 hr
Course: Main Course
Cuisine: American
Keyword: dinner, ground beef, meatloaf, recipe
Servings: 4 people

If you don't use a 10" cast iron, just make sure that you adjust the cooking time. The meatloaf will be ready when the center reaches 165F degrees. You can bake it in any oven safe dish.
Share
Pin
« 15 Minute Air Fryer Breakfast Potatoes
20 Super Bowl Snacks That You Need in Your Life! »