Rigatoni all Amatriciana is one of those perfect Italian dishes that’s insanely delicious. This spicy red sauce is laced with crispy bacon, tender onions and fiery red pepper flakes. Although it’s traditionally made with bucatini pasta and guanciale or pancetta, I use rigatoni and bacon because it’s easier to find where I live. 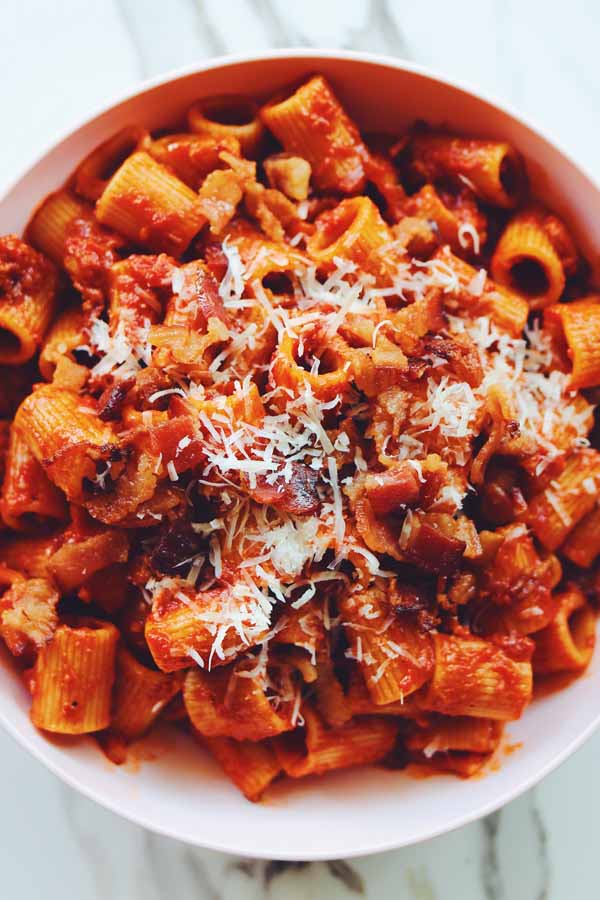 Rigatoni all Amatriciana is one of my family's favorite Italian pasta dinners.

If you've never had it before, you can think of it as a spicy red sauce that's laced with crispy fatty porky goodness, tender onions, and red pepper flakes.

While we were in Italy, it was mostly served with bucatini pasta but I like making it with rigatoni because the sauce gets wedged up into the noodles and it's delicious! 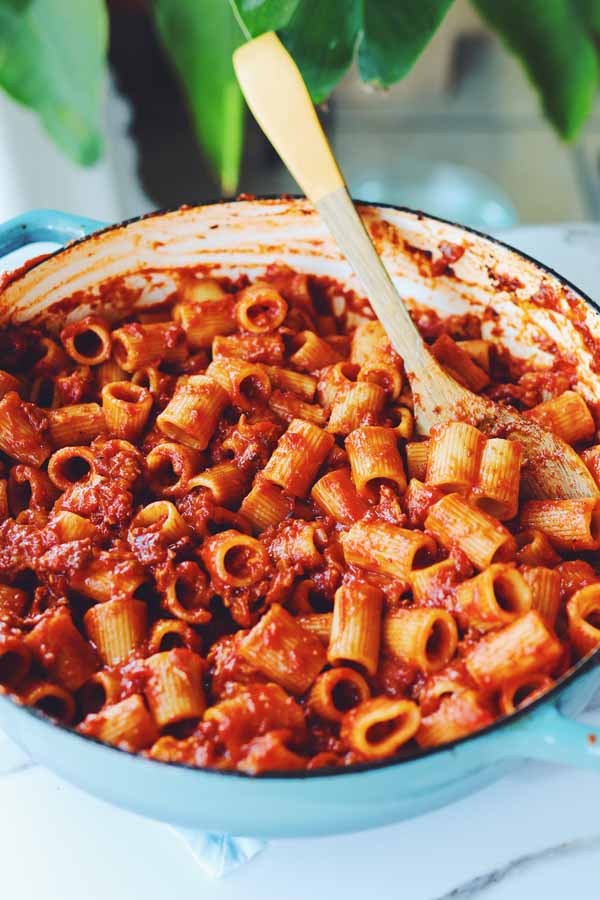 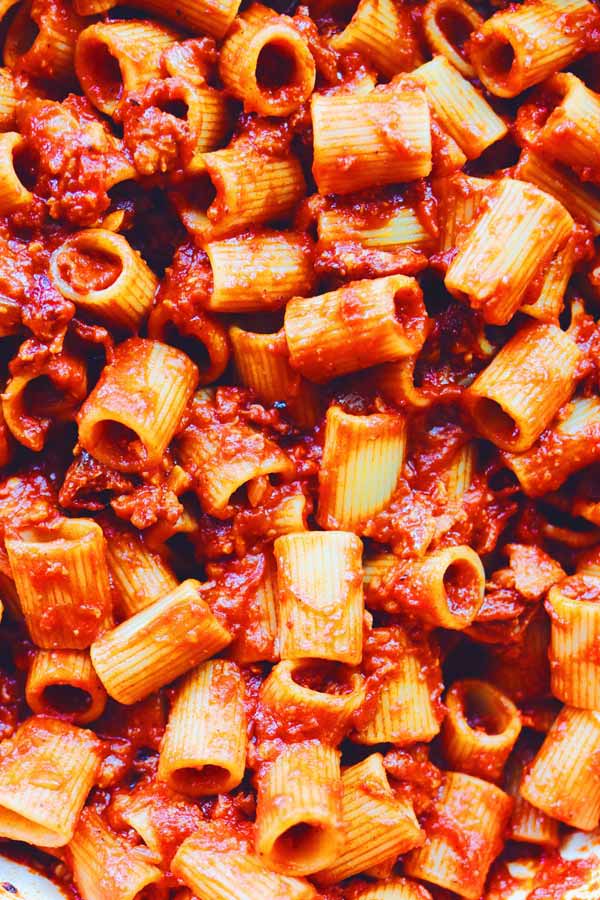 The first step in making Rigatoni all Amatriciana is to get the bacon started. Begin by slicing bacon into small lardons and placing them in a heavy bottomed skillet over medium-medium low heat.

Cook them down, stirring often, for 15 minutes.

Once it’s half-crispy, remove the bacon and place it in a paper towel-lined bowl. 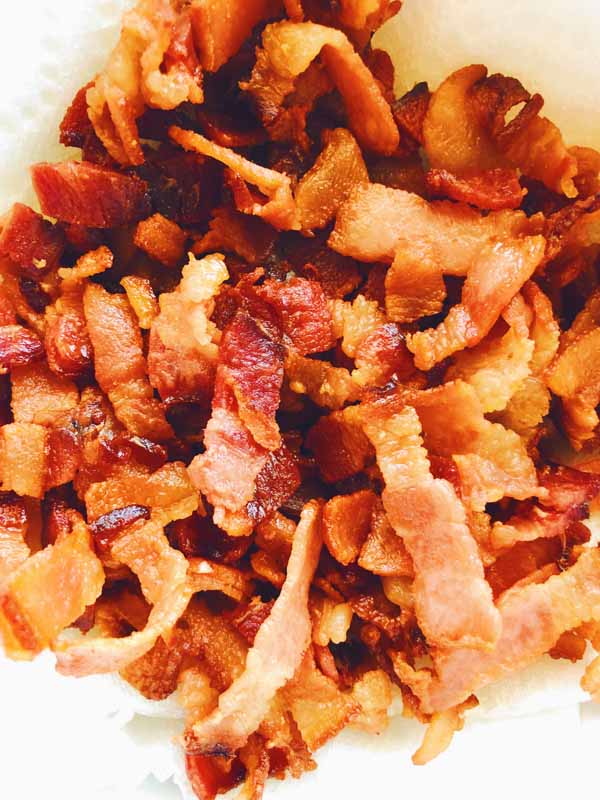 If there's a lot of bacon grease left in the pan, pour out half of it so there's about 3 tbsp of it remaining.

Next, add the diced onions and a pinch of salt and cook for 5 minutes. Make sure to scrape up all the little meaty bits on the bottom so they cook into the onion. 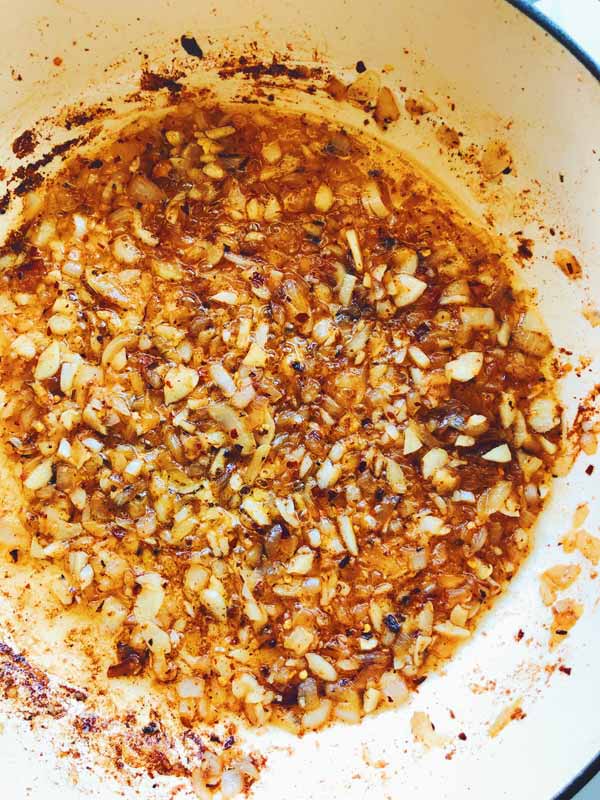 Then, you'll add the garlic and red pepper flakes and cook for another 2-3 minutes or until fragrant. Just don't let the garlic bits burn and get bitter!

Now it's time for the can of tomatoes which get added with a little bit of water and a pinch of salt. 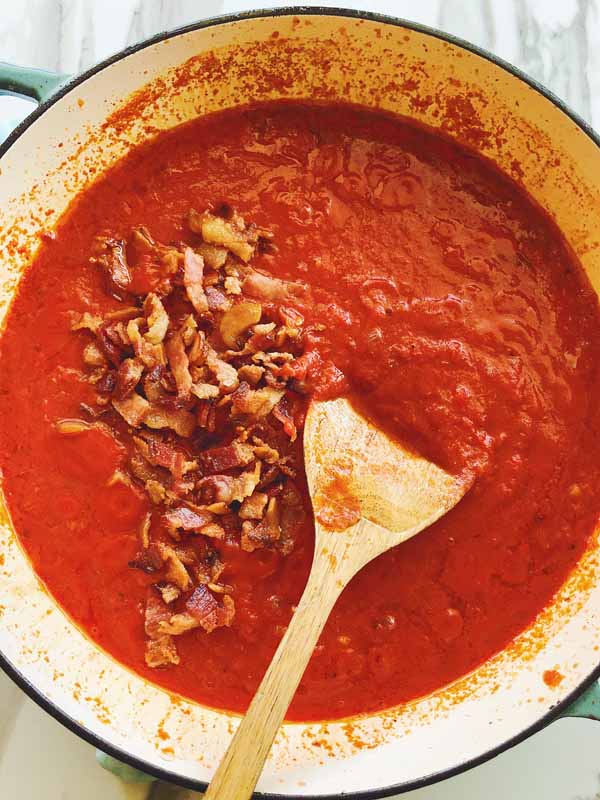 Add half of the bacon back into the sauce with a pinch of salt then put the lid on the pot and simmer over low heat for 30 minutes.

While the sauce is simmering, cook the pasta al dente according to the directions. 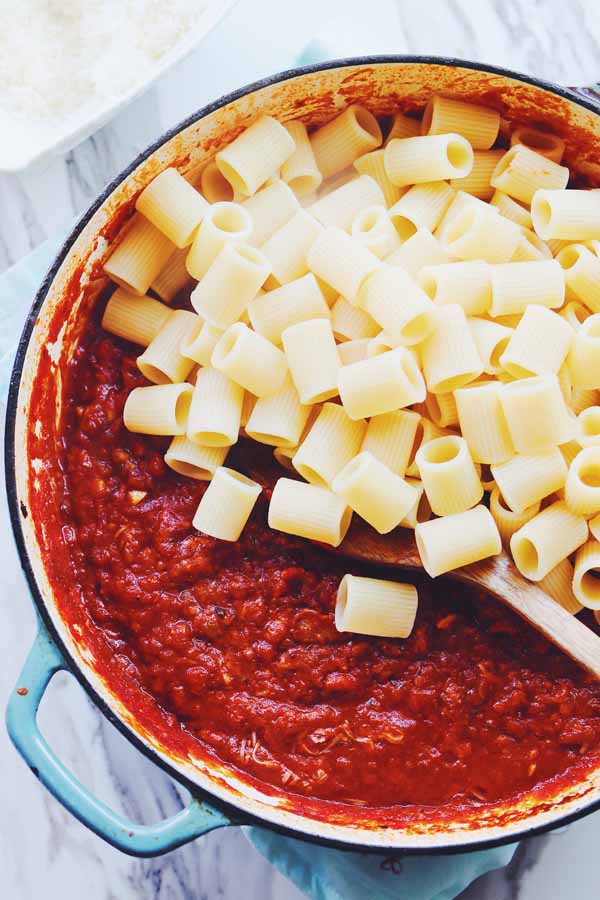 Once the pasta is cooked, strain it but reserve ½ cup of pasta water. This will be used to loosen the sauce later on.

Now stir in ½ cup of cheese then toss the cooked pasta in the sauce and add some of the reserved pasta water if it looks a little dry.

I always add a little at a time so it doesn't turn into a soupy mess! 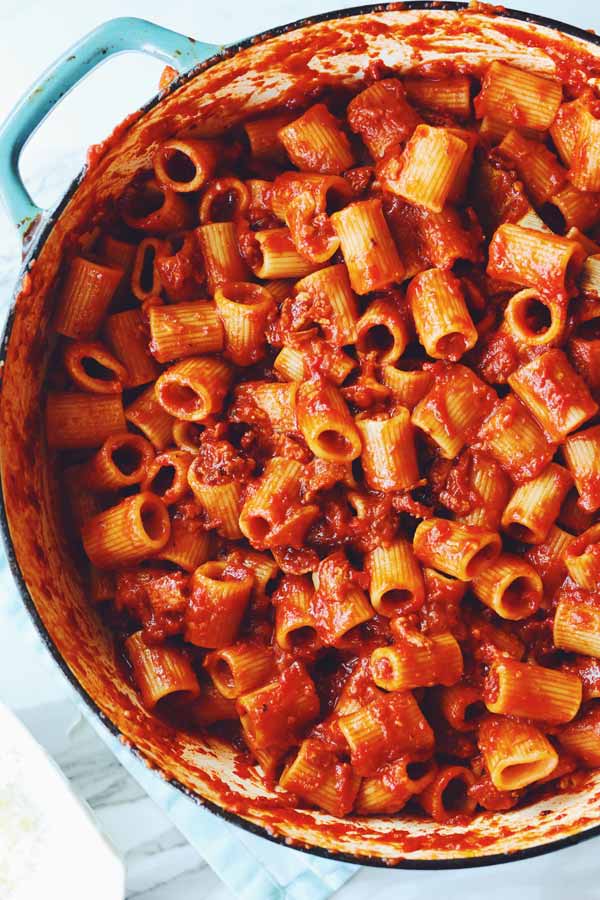 Give it a taste and season with more salt and pepper if needed.

Before serving, garnish each bowl with the remaining cheese and bacon. 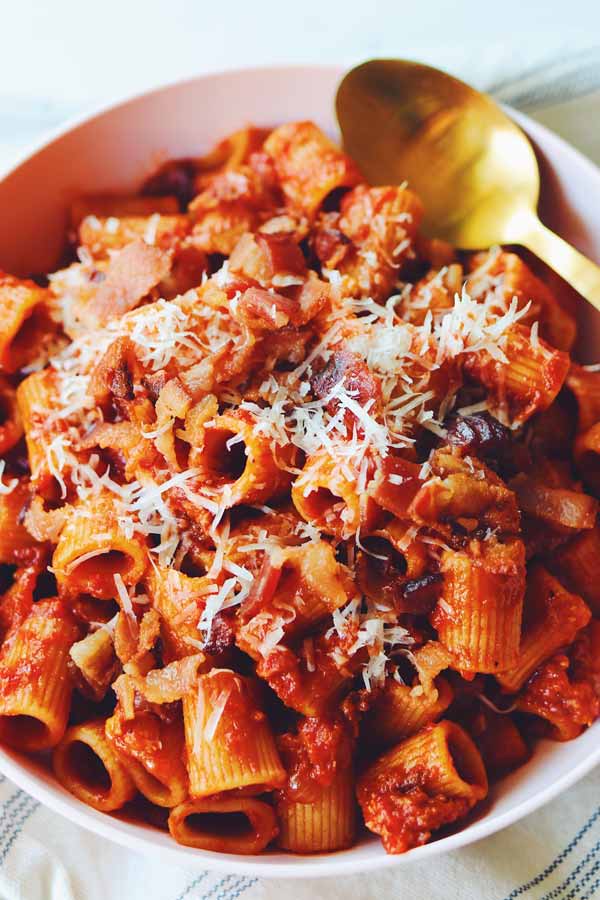 When I was in Italy, I found that this dish is traditionally made with guanciale which is basically just cured pork jowl. As you can imagine it's super delicious!

I've also seen other variations that use pancetta which also lends to tasty results.

However, I typically make this dish with bacon because it's easier to find where I live and the results are just as tasty!

So feel free to use any one of these three proteins. They'll all be delicious and addictive no matter which one you choose! 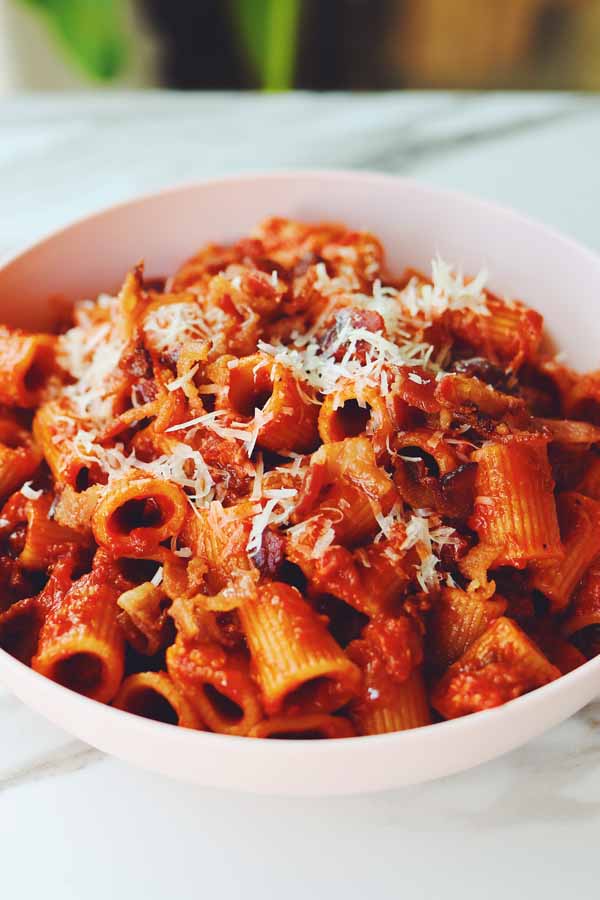 Other types of pasta to try it with

The first time I ever had Pasta Amatriciana, it was made with bucatini pasta which is like a super thick yet hollow spaghetti noodle. It's sooo good and hearty which is what makes this dish so special.

Lately, I've been making it with rigatoni because I love how the bacon gets wedged into each noodle's opening like a little spicy red sauce surprise!

A lot of people also make this with paccheri pasta which is like a thick calamari-shaped pasta.

To be quite honest, to me it's all about the sauce -- which my husband thinks gets better overnight! So feel free to use whatever pasta you have available! 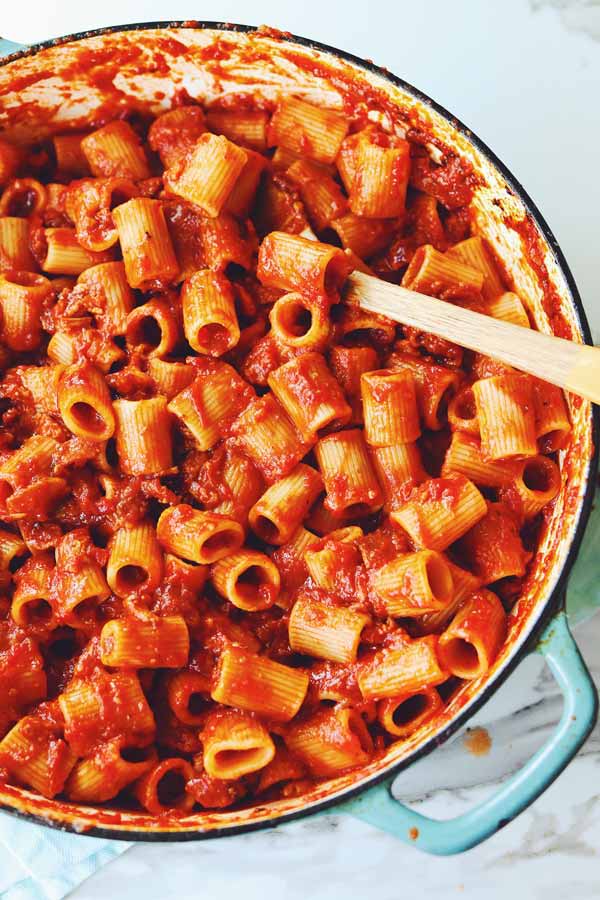 If I were making this rigatoni all amatriciana, I'd start with some black truffle stuffed brie and this crispy air fryer asparagus or these parmesan tossed roasted brussel sprouts and asparagus to serve it with.

For more red sauce inspiration, you could make my easy bucatini bolognese, spicy vodka rigatoni or this gnocchi alla sorrentina.

For a white sauce pasta, I highly recommend this creamy cheesy Pesto Cavatappi or some light and bright Tortellini alla Panna.

And then for dessert, I recommend this flourless chocolate cake with fresh raspberries! 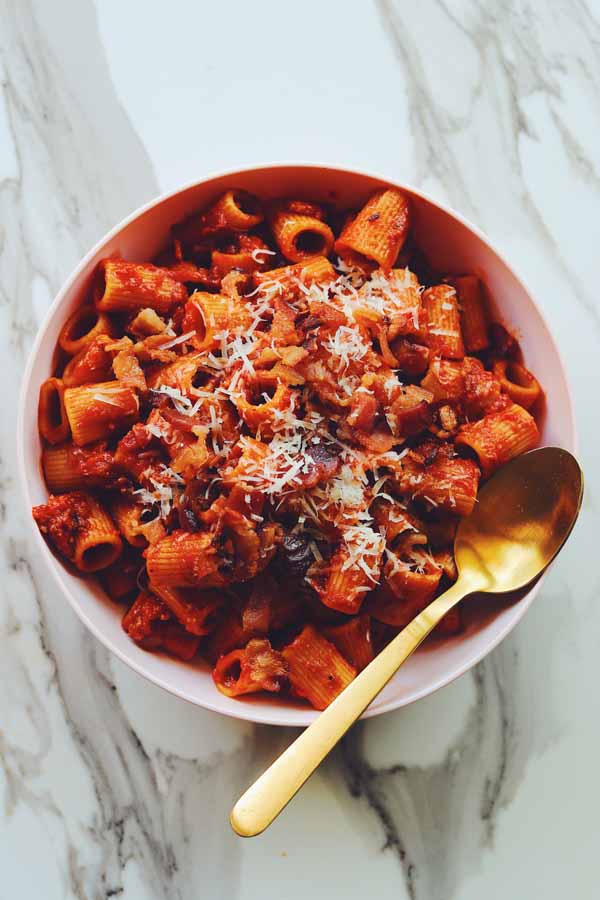 Save it for later

If you’re saving this rigatoni all amatricia recipe for a later, please feel free to use one of these pinterest images below!

And if you don’t follow me on pinterest already, I would totally love it if you did! I share everything from tasty recipes to DIY home projects and more! 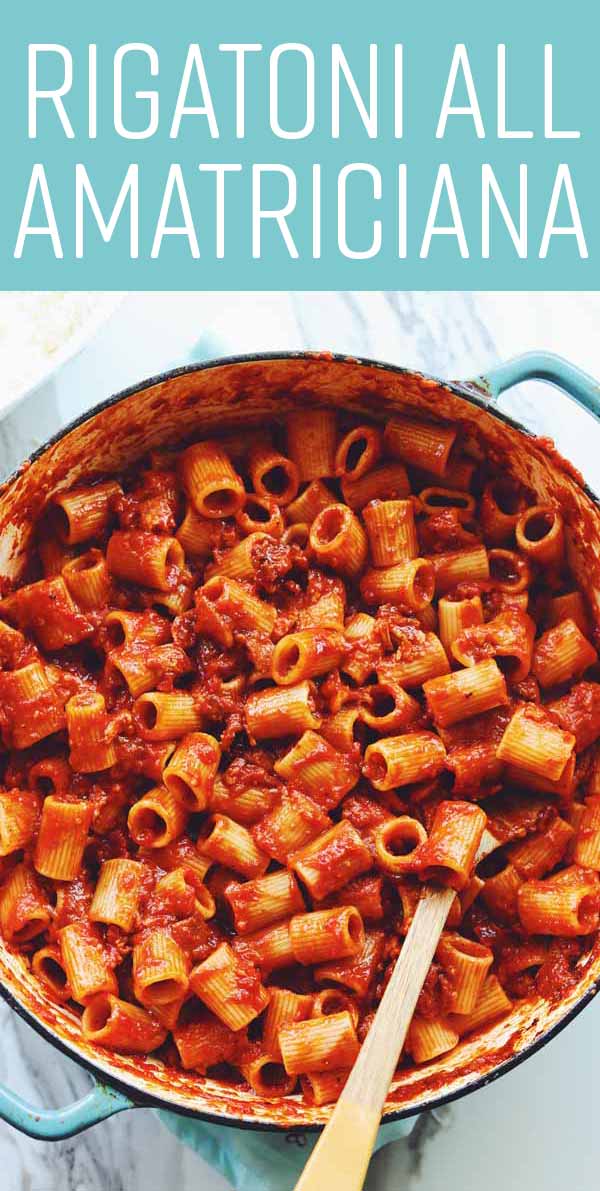 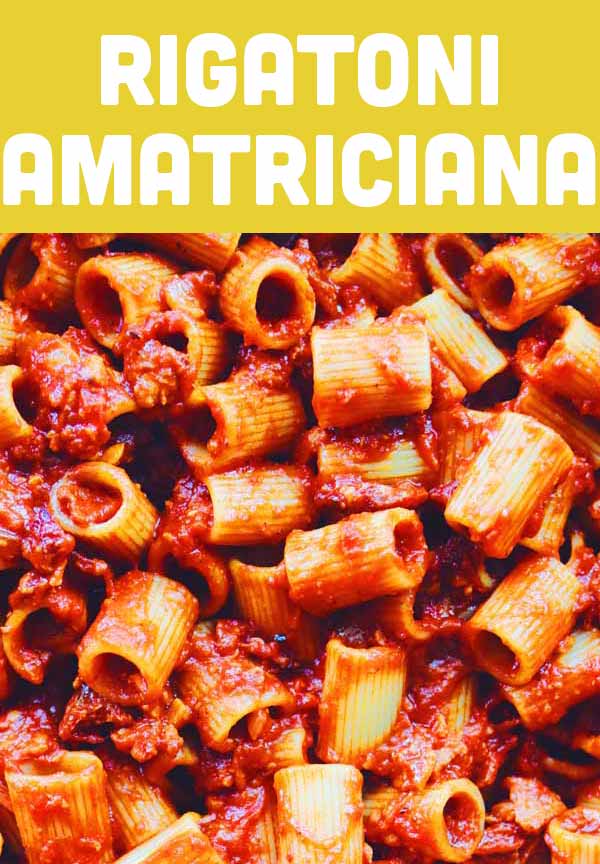 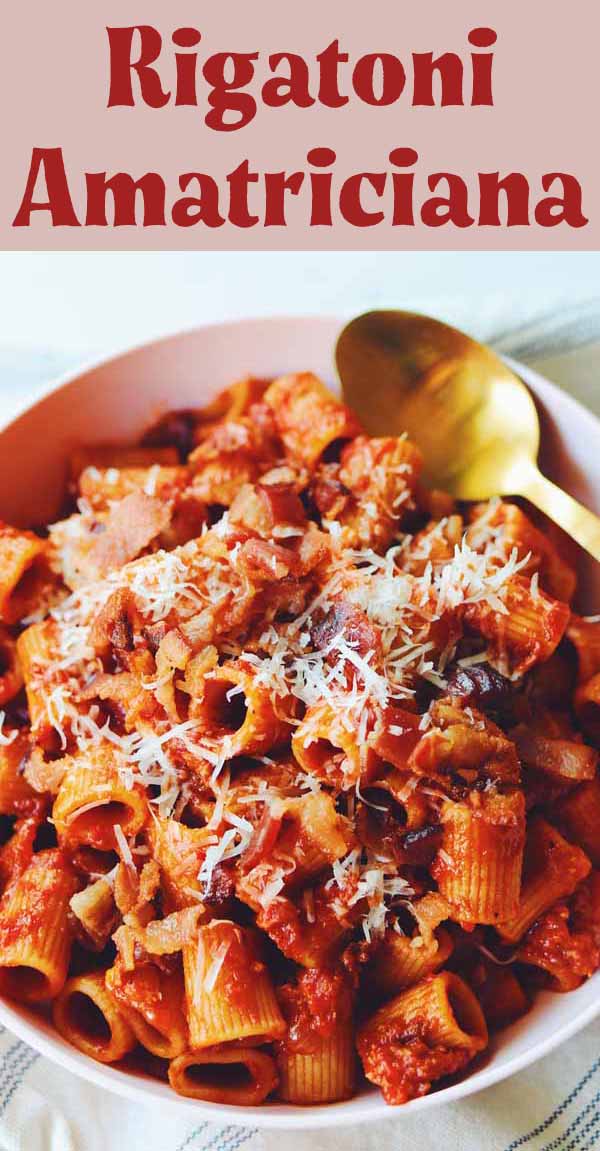 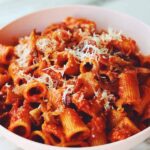