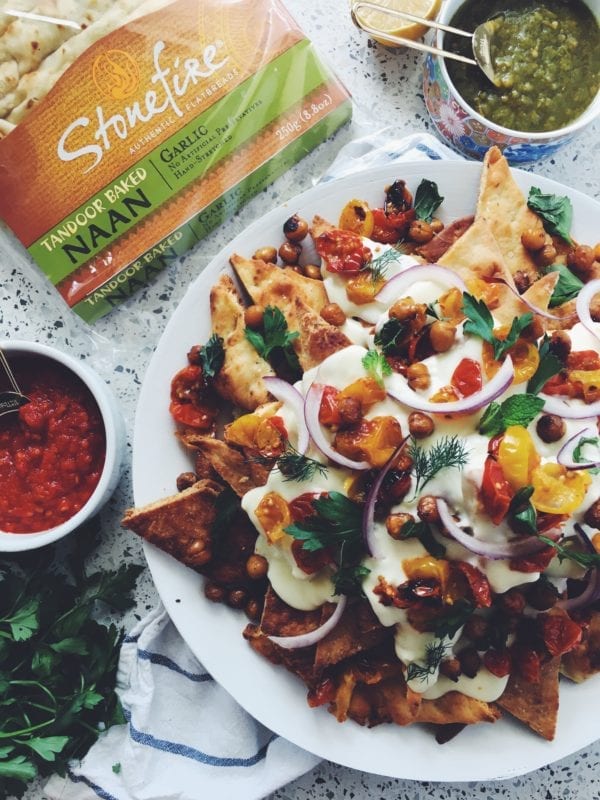 Back when i was in college, i practically lived on pita fries from this greek spot called Pitaria right down the street from my dorm at Florida State University. My affinity for a high carb diet led me to basically become obsessed with these beautifully golden deep fried pita sticks that were tossed in herbs and spices and plunged into a creamy feta cheese dip. After my second winter of eating my weight in these, I realized that it probably wasn’t a good idea to eat so much fried food. So instead of spending all of my time, money, and daily allotted calories at Pitaria, I decided to change the game and get my act a little healthier. 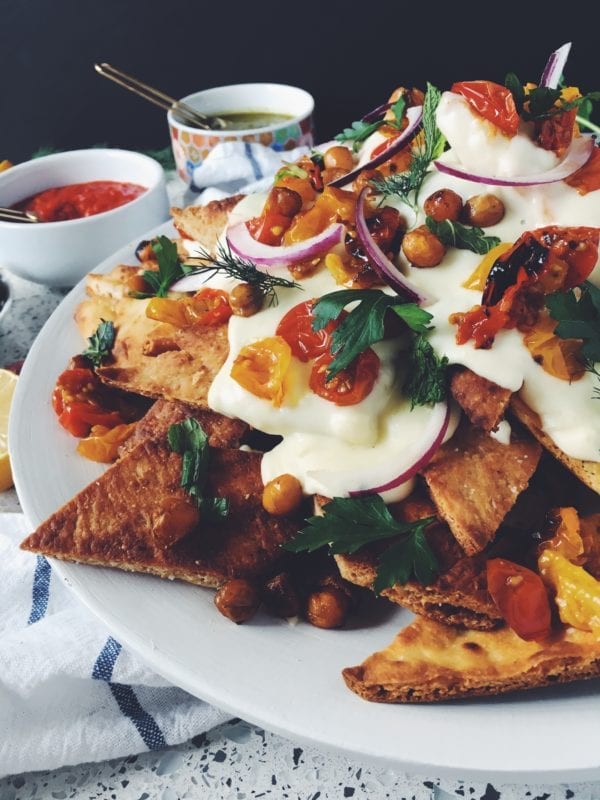 Instead of ex-ing it out cold turkey, I began to try and replicate this dish and home. I’d bake my pita to get that nice crispy crunch. It was ok, definitely not as good as the deep fried stuff, but the pita just fell short on flavor and I became disinterested. A few years later, I remember going to an Indian restaurant for the first time and taking my first bite of naan. All of these awesome taste memories started flooding my brain and my endorphins started overflowing. It was warm and moist yet also crispy, light and airy. It was also about 1000 times more flavorful than any pita I’d ever had and I fell in love. At that moment, I knew it. I’d say goodbye to pita and say #hellonaan!

Fast forward to 5 years later when I was living in NYC and I walked into my little 24 hour organic bodega on Bushwick Avenue only to find packaged naan right at my fingertips. Gone were the days of having to order takeout just to get delicious garlicy naan. Now I was able to get it at the grocery store, warm it up, and chow down on one of my favorite breads on the world. Even 5 years later, I still use it all the time on everything from pizzas like this one with spicy zucchini and fresh mozzarella to delicious sandwich wraps like this one which is stuffed with spiced lamb korma meatballs, yogurt sauce and mint chutney. 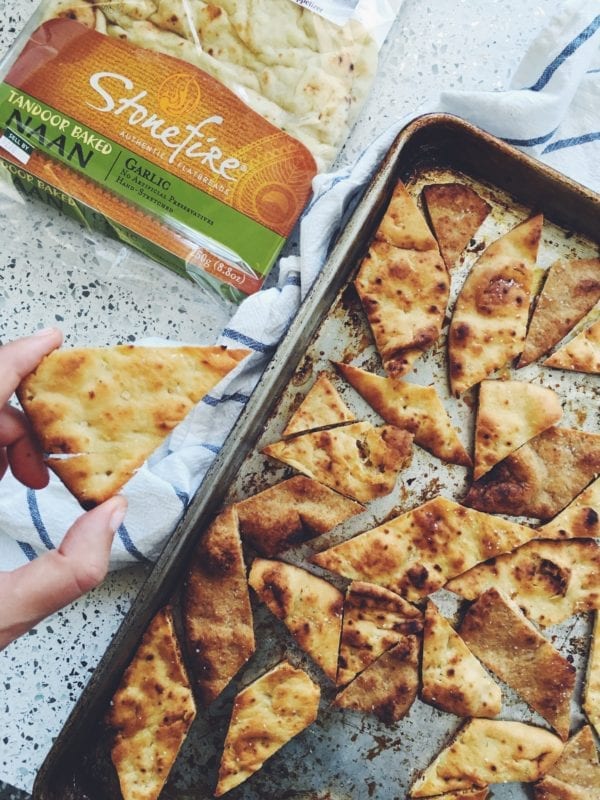 And this week, when I got approached by Stonefire Flatbreads to come up with some unique recipes, I said “heck yes, I would love to!”. So I put on some sweats, headed to Publix, and skipped into the speciality bread section right next to PubSub counter. To my surprise, it was buy one get one, so I got two flavors – the Tandoor baked Garlic and the Whole Grain. There are even more awesome varieties like Ancient Grains, Mini, and Original. And unlike most of the flatbreads at the grocery store, Stonefire doesn’t use any artificial preservatives which makes their flatbreads extra awesome and even more chow-down-able. 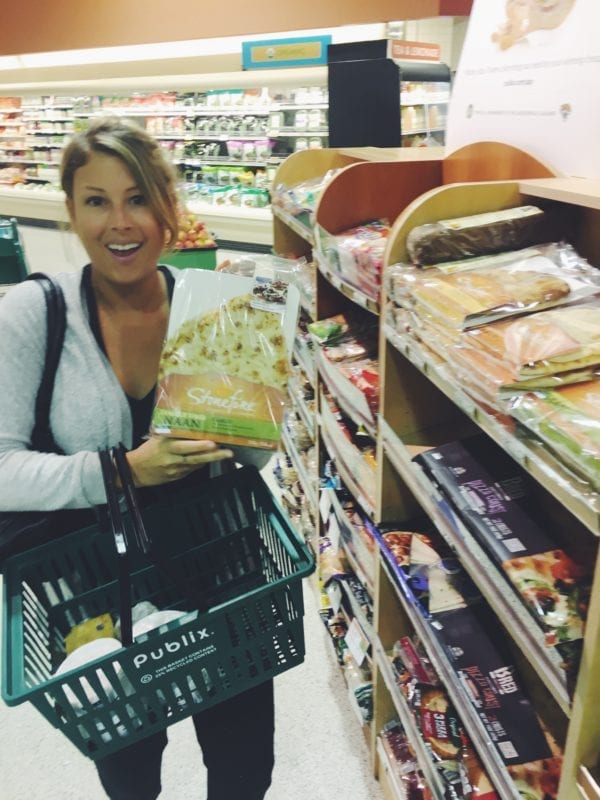 So when I was brainstorming a recipe, I wanted to create an updated tribute to my all time favorite college meal while also making something that’s perfect for the cooler weather ahead of us. That’s how these insanely delicious loaded naan nachos were born! Just bake until crisp and delicious, and top with a light and creamy feta cheese sauce, sweet roasted cherry tomatoes, crispy curried garbanzo beans, red onion, and tons of fresh herbs. They’re like the adult version of pita fries mixed with upscale nachos and splashed with a little inspiration from our recent Greece trip. And best of all? These are super easy to make and can be done in about 30-40 minutes if you’re starting from scratch. Loaded Naan Nachos are the perfect weeknight meal when you just want something comforting, flavorful, warm and toasty to nosh on. 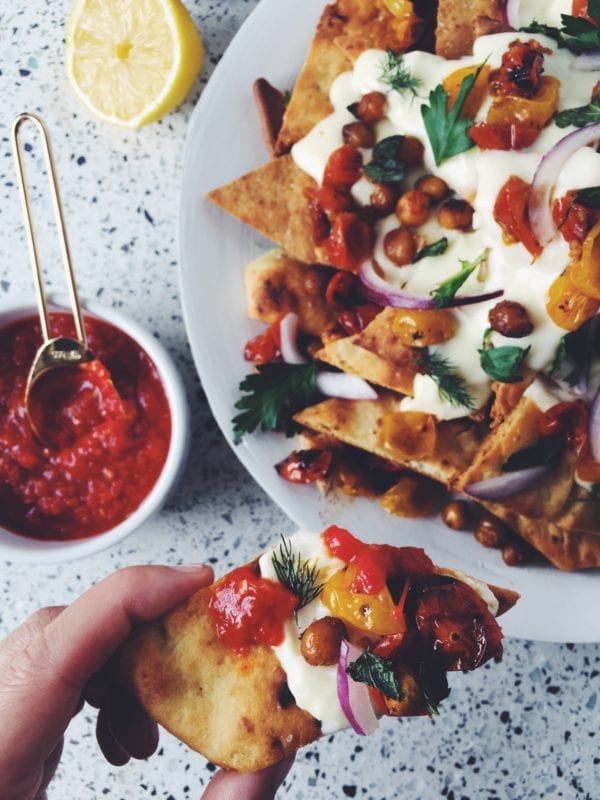 FOR THE NAAN NACHOS

FOR THE FINAL DISH

FOR THE NAAN NACHOS

FOR THE FETA CHEESE SAUCE

FOR THE FINAL DISH 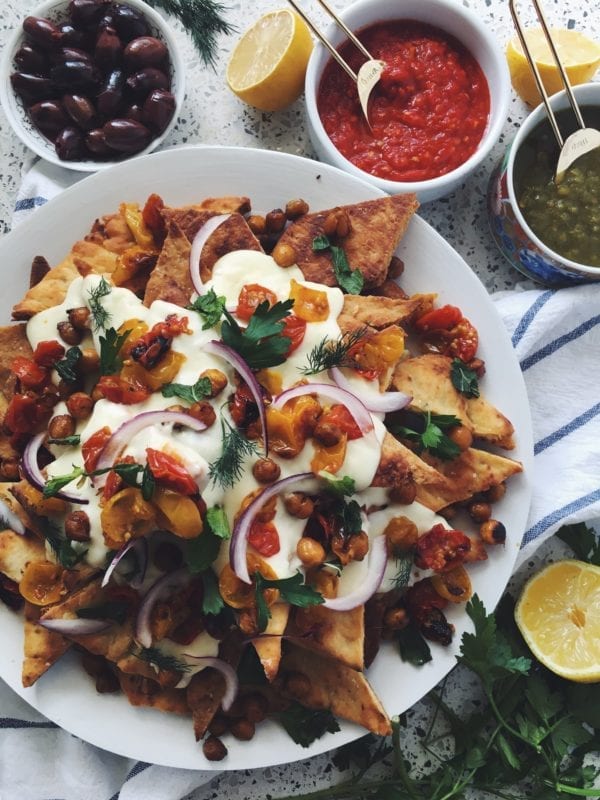 **This blog post was sponsored by Stonefire® Authentic Flatbreads but the opinions are all my own.**