These Hibachi Noodles are a must when it comes to making Hibachi Chicken and Yum Yum Sauce! They’re buttery, salty and full of delicious Asian flavors. Traditionally, they’re made with Yakisoba noodles but you could easily swap them out for a box of linguine pasta if needed!

I shared this easy Hibachi Noodle recipe to go with my last post featuring Hibachi Chicken and Yum Yum Sauce.

Not only is the perfect side dish to go with it, but it's also a great stand-alone noodle dish that's quick, easy, and totally delicious.

It's loaded with fresh garlic, zesty ginger, crisp scallions and the noodles are coated in a buttery, salty, sweet homemade teriyaki style sauce.

As I mentioned above, it's traditionally made with yakisoba noodles but I can't easily get those where I live... especially with everything that's going on in the world today.

So instead of using the authentic noodles, I swapped them out for a box of linguine noodles and they worked just fine!

To be quite honest, my entire family ate them and not one person said anything about the noodles so don't sweat it if you're unsure.

And if you’d like to make me watch Hibachi Noodles with Chicken and Yum Yum Suace step-by-step, then head on over to my instagram page and watch it on my story highlights!

Ingredients - What you need

How to make hibachi noodles

You'll be surprised at how easy it is to make Hibachi Noodles at home! You don't even need a wok or a Hibachi Grill to do so - all you need is a large nonstick pan.

To begin, you'll want to cook your noodles according to the package. When they're done, strain and rinse them so they don't stick together.

Next, melt butter in the nonstick skillet over medium heat and add garlic, ginger paste, and a pinch of salt.

Let the mixture cook for a few minutes until it smells really good and the garlic is soft; about 1 - 3 minutes.

Next, add the soy sauce, brown sugar, and water and let the mixture simmer until it gets thick.

Now it's time for the noodles! Add them and carefully toss them in the sauce. I say to do it carefully because you don't want to accidentally chop up the noodles with a pair of tongs or anything like that.

Once the noodles are tossed, finish with a drizzle of sesame oil, a squeeze of lemon juice and a sprinkle of chopped scallions.

Just be sure to taste them and season with salt and pepper if needed!

What type of noodle is best?

Hibachi Noodles are typically made with Yakisoba noodles. You could also use Ramen or Udon Noodles if you had those on hand!

Unfortunately I can't really find those authentic noodles where I live so I had to substitute them with a box of Delallo Linguine Pasta - which was delicious!

To be quite honest, it worked really well! No one even questioned it and I was able to make it on the fly without having to venture out of town to an Asian market.

Obviously the real thing would be more authentic, but sometimes you just gotta make due with what you have!

How to reheat them

If you have leftovers (which we never do! lol), it's super easy to reheat these noodles!

To do so, just heat up a little bit of butter and sesame oil in a skillet over medium heat and add the noodles.

Add 2-3 tbsp of water (depending on how much leftovers you have) and put the lid on. Let the noodles heat up for a few minutes, stirring occasionally, until they reach the desired temperature.

If you’re making these tasty Hibachi Noodles, then you must make the Hibachi Chicken with Yum Yum Sauce that go with it!

When it comes to other tasty Asian recipes – I got you! For appetizers,these Vietnamese Spring Rolls are always a hit. For something more healthy, this Chicken Laab is perfect for lettuce wraps.

Want to save this recipe for later

Want to save these Hibachi Noodles for another time? I made these pretty little pinterest-ready images so you could do that!

And if you don’t already, feel free to follow me on Pinterest for daily food and home inspiration! 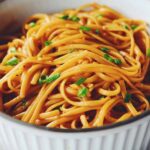 These Hibachi Noodles are a must when it comes to making Hibachi Chicken and Yum Yum Sauce! They’re buttery, salty and full of delicious Asian flavors. Traditionally, they’re made with Yakisoba noodles but you could easily swap them out for a box of linguine pasta if needed!
Prep Time5 mins
Cook Time10 mins
Course: pasta, Side Dish
Cuisine: asian, Japanese
Keyword: asian, easy, hibachi, noodles, pasta, side dish
Servings: 4 people