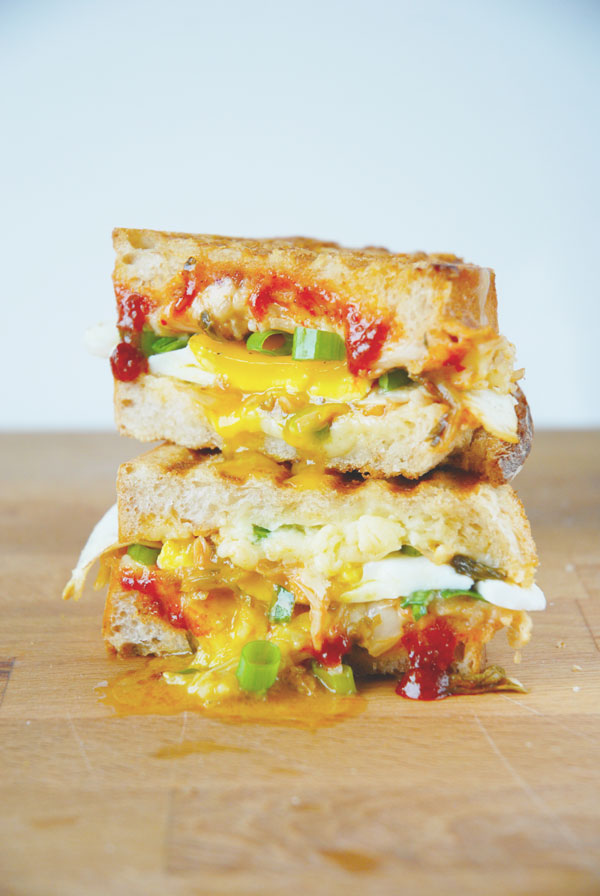 When I was "planning" my trip to Europe, I forgot to actually figure out anything for my week in Berlin. I didn't realize this until, well, 1 day before I was about to leave Hamburg. You see, I'm not much of a planner and I can usually get away with it, but since I had been snug as a bug with my friends in Hamburg, I sort of panicked. I had never been to Berlin, nor had any connections there. It was weird going to a place that I didn't know one single soul but it was also kind of exciting. I imagined that I'd stay at some cheap hotel, spend a lot of time "blogging", explore the city solo style, and hopefully meet a random group of friends that would adopt me into their clique and take me to some raves.

Then all of a sudden in the middle of my daydream, I got a facebook message from one of my best college friends that said "girl, you have to stay with Vik, she's just like you and I think you will be best friends". And then a few minutes later, a message from Vik appeared and she told me I could crash at her pad. This was one of those moments where I felt completely in awe of the world and wanted to give the internet a big ole hug.

After a 2.5 hour train ride from Hamburg to Berlin, I got a text from Vik saying that she was waiting for me at the train station. HOW F*CKING NICE. Could you imagine anybody doing that in NYC? hhahah NEVER. That would never happen here... But guess what? It really happened there. She scooped me in a car that she rented from a car sharing service (it was a BMW... so fancy omg!) and we headed to her house. In the quick 10 minute ride, I discovered that she was in the food biz as well and was in the process of opening a restaurant called Industry Standard with her boyfriend, Ramses, a super dank and extremely knowledgable chef that had trained all over the world and had a sense of humor that could be summed up by one joke - The Aristocrats . I instantly loved them.

Then things got even weirder. When I got to their apartment, I met Bongo. As soon as I saw this lil guy I almost cried. He looked exactly like my pup, Pippy, but all white! See what I'm talking about here - Pip vs. Bongo. Instant love. Then later that night, I learned that her mom grew up in Tallahassee and went to the same high school as my mom... Of course, I went on what's app and asked my mom if she knew and and well, not only did she know her, but she dated her brother for 3 years! HOW FRICKIN WEIRD!? So yeah, to say we all connected would be an understatement. Vik is seriously my soul sister and my trip to Berlin would have sucked if I had not met her, her man, and her pup. They showed me the city, stayed out all night with me... a lot, and went out of their way to be hospitable. Vik and Ramses, if you're reading this, please come stay with me in NYC. I'll show you the best time ever and will make you all the sandwiches, including this one. 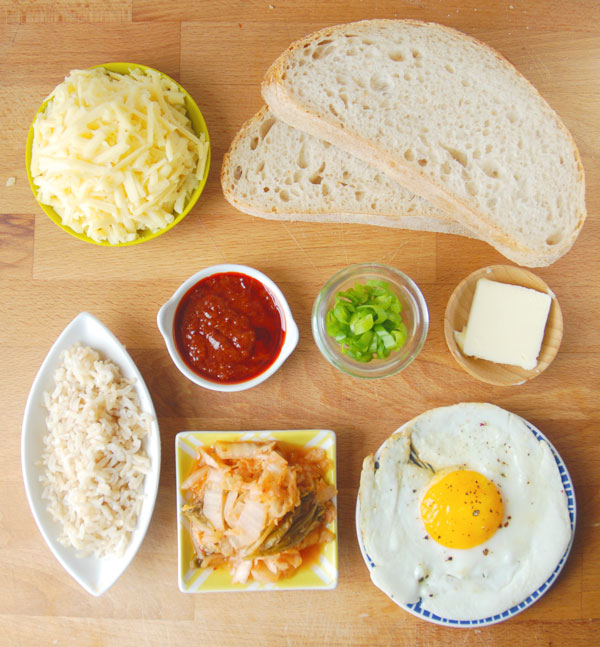 So to begin, let's start by smearing on some gochujang on the bread. This is probably my new favorite condiment of 2014 and it's also absolutely essential to bibimbap. It's a Korean sauce made of fermented chiles and soy beans. It's sweet, spicy and packed full of umami-ness. 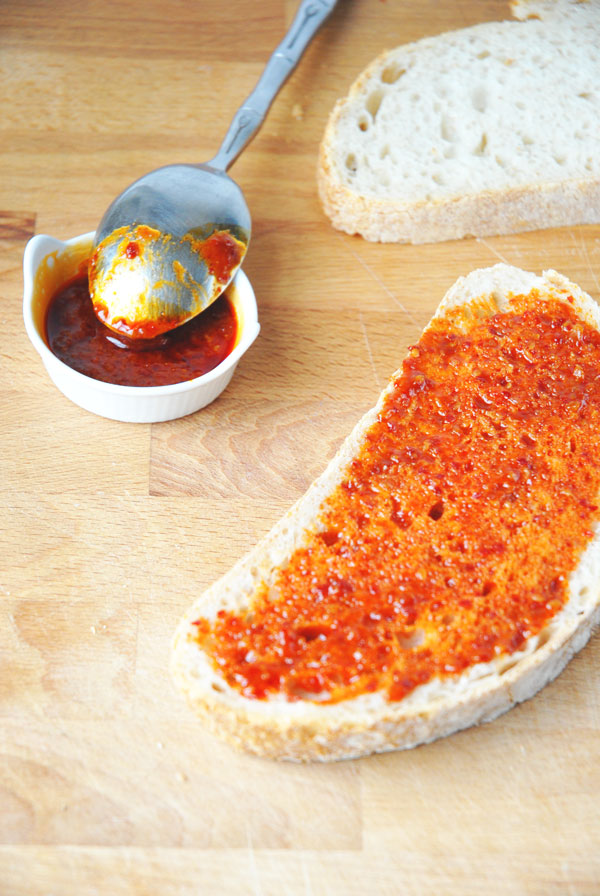 Next, add on some of the 1 year cheddar. This baby was given to me by my friends at Whole Foods and I totally dug it. Not only does it melt super nicely but for being a one year cheddar, its also super flavorful and sharp. After that, I added some leftover coconut rice that I had. To make this yourself, basically just plop a tablespoon of some really nice coconut oil into your rice before you make it. It totally transforms the rice and gives this sandwich a cool texture. 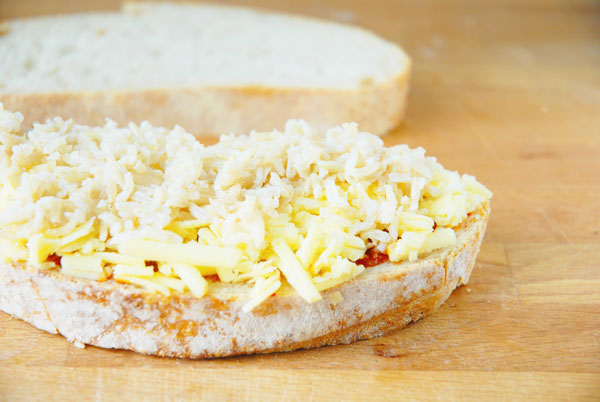 Now add some of Mama O's Premium kimchi and a diced green onion. I'm such a fan of this brand and Kheedim Oh, the founder, hooked me up with a gallon of the good stuff so I wanted to feature it. You can use your own but it won't be the same without some of Mama O's goodness. 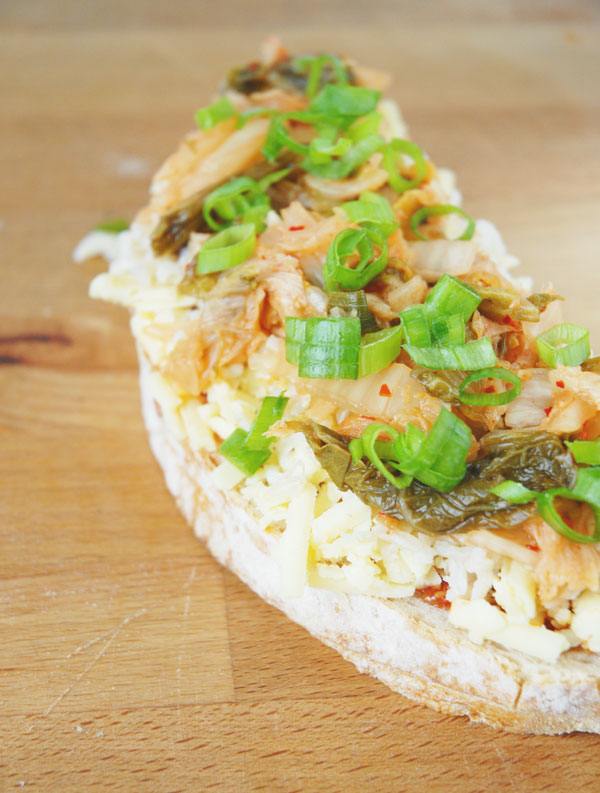 Add the rest of the cheese and the top piece of bread and butter this baby up. 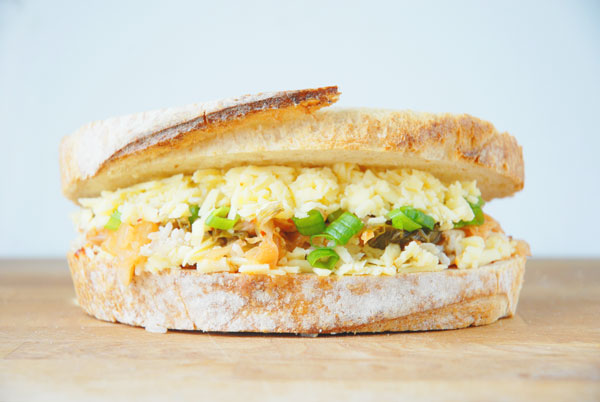 Now heat your Breville panini press (or pan, but this method is the easiest) to medium-high and let this sucker cook. After a few minutes, it will be golden brown and the cheese will be all melty and irresistible. 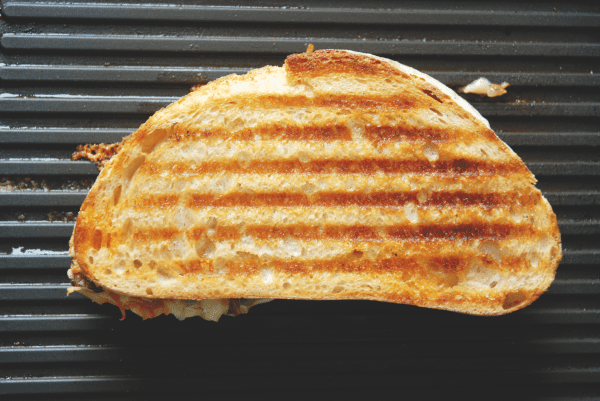 Take it off the heat and let it sit for a minute or two. After the cheese has thickened a bit, gently open the sandwich up and add the fried egg. Carefully close it up and give the sandwich a little press and cut it down the middle so the egg yolk splooges. Sorry, I had to use that word, there was nothing else to describe it.

So if you ever go to Berlin, you must check out Industry Standard which is opening in the next month or so. Everyone that is going to work there is going to be at the top of their gang. And oh! if you meet Vik, give her a hug for me.