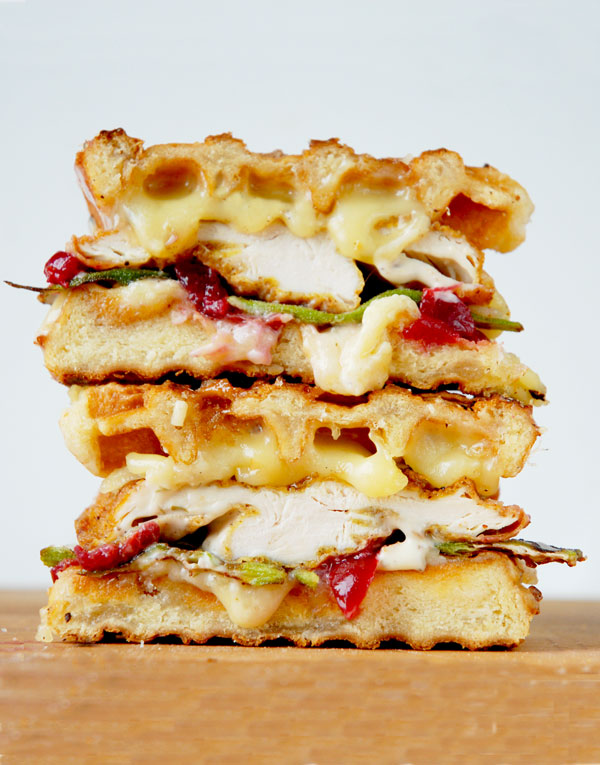 To say that it's been a while since I posted would an understatement. In fact, I don't think I've done one single grilled cheese post since I've turned the ole' grand age of 28. Yeah, I'm 28. Yeah, that DOES mean I'm almost 30. And well, yeah, it feels super weird to realize that I'm not going to be in my 20s forever. I don't mind it though. As I'm looking up the 30s under 30 list, daydreaming of getting in it before the time runs out,  I've decided that I actually really like being almost-30... It's like this weird age where all of a sudden people take you more seriously and you actually start feeling like a real live worthwhile human being.

For some reason, when I think about the things that I wanted when I was growing up, I always go back to this memory  of being a bummed out 15 year old at a punk rock show. I was standing in the corner watching this super cool girl with blue hair smoking a cigarette and drinking a beer while chatting it up with a band. Let's be real, it was probably just the merch guy that she was chatting with, but damn she looked cool! She was so casual, confident, and hot that I automatically idolized her... Alllll I wanted was to be her - to just able to walk up to anybody and be able to share a convo and a stupid joke about a one eyed witch that made everyone laugh. I used to wonder if I would be like that when I got older or if I was destined to forever remain a square in the back corner of a bar creepily staring at the outgoing girls that I obsessed over.

But ya know what? Eff that. It wasn't up to destiny or anything like that. All I knew was that I had to become that girl or I would live a life of regret, envy, and mad creepiness. And to be brutally honest, all the years leading up to my 28th have been hella hard . Sure, they've been really fun, like a lot of fun I'm lucky I'm still alive sort of thing, but they've been really seriously tough. I was confused, obsessed, and lost.  But things have changed as I've matured into a old young lady  (is that a thing?). Within this last month of becoming 28, I've been feeling like I've finally become that chick that I'd idolized at The Orpheum in Tampa that one random night of my teenhood. I've been feeling really fortunate and confident in myself... And it feels, well, weird as fuck and I'm not too sure if I like it.

I'm used to whining about being poor and not knowing what I'm doing with myself, but for some reason, within the last 6 months, I've had more opportunities than I've ever had, EVER, combined. I've become a spokesperson for something (eh hem Wisconsin Cheese! doi!).  I've got do do food styling for a few huge brand's national ad campaigns. I've had a cooking segment on National TV. I've got my own brunch menu up and running at a super swank restaurant/bar in Williamsburg called Sugarburg. And I've got a month long Berlin/Hamburg/??? pop-up grilled cheese tour coming up in about two weeks. And I don't mean to sound braggy or anything but what the heck? Is my life PERFECT right now? When did all this happen? Am I a real girl now? What?!

But dang, that reminds me - Do I need to get a one bedroom apartment and start living without roommates like a real adult? Should I have paid off all my medical debt from that one time I broke my arm and shoved all the bills in a drawer and never once looked at them? Should I have a savings account? Should I start exercising so that I don't become a fat old ball of cholesterol that no one thinks is hot? Shit there's that whole significant other thing that I should be on top of, too. I should probably be settling down and start dating one person (yikes) who will maybe one day become my husband who will hopefully one day knock me up before my ovaries shrivel and turn into weird gross dust  or whatever. Sorry for that visual but ugh! Yuck. I take it back. Growing up is hard and I don't feel on top of things anymore. Sure, I'll go up and talk to anybody that I want to, but I don't want to think about it anymore. I'm just going to live in the moment for a little bit.

And duh, what I said is nothing new. We all know life is hard. But we also all know that grilled cheese is not and I think that's why we all love it. It's also why I'm reinventing one of my old classic sandwiches into a new and hipper version of a fried chicken and waffles grilled cheese. I mean you gotta keep reinventing yourself to stay relevant, right? At least that's what Madonna taught me. Anyways, let's get started before I have a panic attack over my future. Ok so here's what ya need. 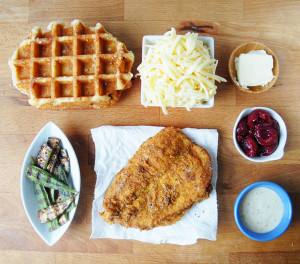 So this step is easy and you probably already know what to do. Shred that cheese and plop it on! 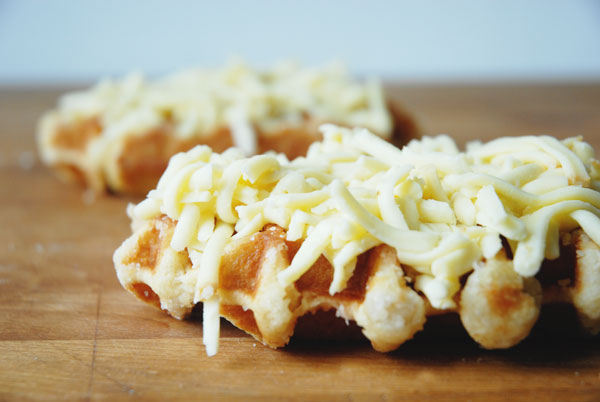 Now Fry up some chicken, put it on top, and don't look back. Sure, fried chicken isn't the best for you but either is  drinking. C'mon YOLO! Am I right? Click here if you need a fried chicken recipe. 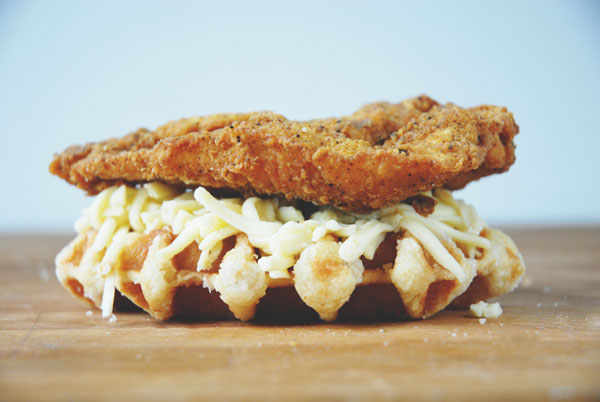 Now here's the I do what I want part. Add some ranch. Yeah, you heard me. Add that ranch! Then add some pickled cherry bits and smile. You deserve it!

If you have no idea how to make pickled cherries, don't sweat it. I didn't either until I got invited to a cherry canning class at Whole Foods a few weeks ago. To be real, I didn't even make these ones! I was just handed them at the door in a nice little gift bag. I know, i know, it's not fair but click HERE to go to Whole Foods website and get that pickled cherry recipe. They're crazy good... especially with cheese, fried chicken, ranch , and belgium waffles. 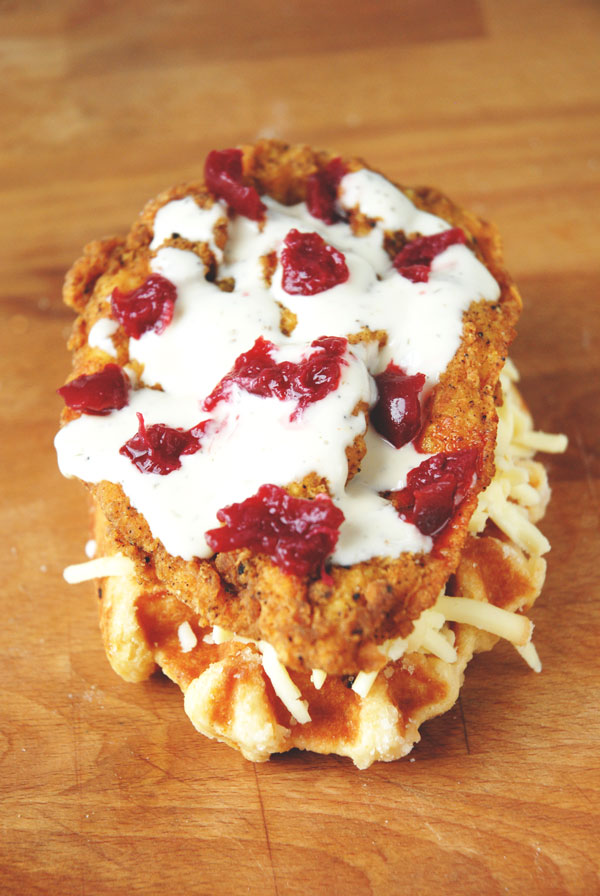 Now it's time to add something green because shit, I'm getting older and I've got to be a little more health conscious. These little stems of grilled okra are my new fav thing! They're so easy and good that you might just start eating them on the reg... even if you're not trying to fit into last summer's shorts.

To make them, just split some okra down the middle and toss with olive oil and a little bit of salt. Heat up a grill pan or your panini press for a few minutes until it gets piping hot... THEN CRUSH THEM. Not like in a bully sort of way but rather, in a "I want these to be super flat and crisp" sort of way. Cook until they get little grill marks and become tender. Then devour... Or in this case, save them so you can make this sandwich. 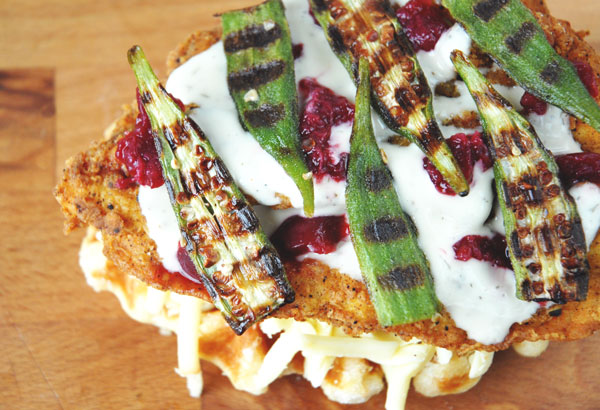 Omg you're almost at the finish line! Just add the rest of the cheese and the other belgium waffle and get ready to grill! 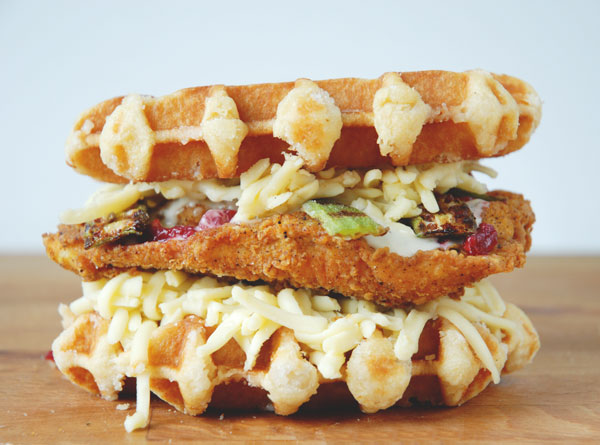 Since belgium waffles are full of butter and sugar, you don't really need to butter this sandwich up before you grill it. I thought  I needed to before I made the recipe, but hey, you live and you learn. And you also gotta watch out for the grilled cheese haters that might not necessarily call this a "real live grilled cheese". To avoid the, just tell them that they don't get any bites. Then they'll be sorry and not so serious about these fake rules that they made up.

Anyways, I digress! I used my Breville panini press to cook up this bad boy, but you could totally do it in a pan. Just make sure to keep the heat super low, and sort of cover the sandwich so that the steam can help the cheese melt. 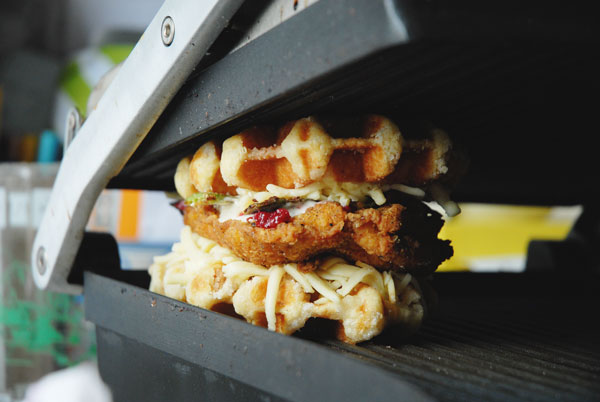 After about ten minutes of cooking on each side (I know, i know, it takes a long time!) it should be done! Be sure to let it sit so that the cheese doesn't ooze out while it's all hot and gooey and absolutely perfect.

So if I had one word of advice, it would be to keep doin yo' thang. As long as you're true to yourself and do nice things for others and stay excited, everything will be amazing... Even if the future is horrifying - which it always will be. I think. You guys rule. Thanks for sticking with the blog even when i don't come through!

Oh, and if you'd like to cheers with this sandwich, I'd highly recommend toasting to some of Angry Orchard's newest concoction called MUSE. Because what's better than bubbles with fried chicken? NOTHING!