×
This stuffing waffle grilled cheese is allllll about the leftovers! Pack leftover stuffing mix into a waffle iron and press until golden brown. Once the waffles are ready, it gets stuffed with muenster cheese, cranberry jam and mashed potatoes and grilled until golden perfection! 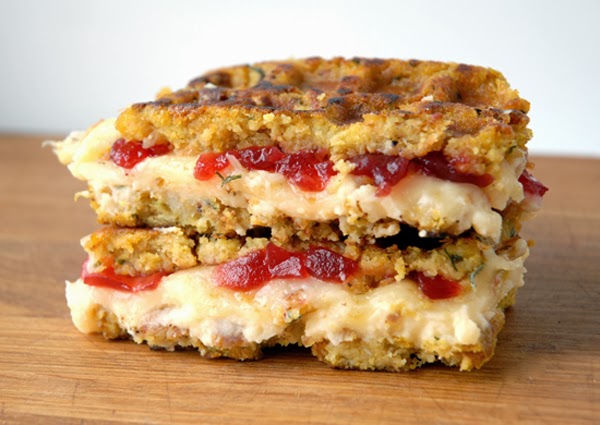 Man oh man. Thanksgiving is here again and I'm finally starting to feel like I'm slightly good at this.

It's been about 3 years since I started having my own personal lil Brooklyn food fest sans mi familia, and there's def been some gross ass turkeys hurdles along the way but I'm actually getting the hang of it.

I mean, now that I know that you have to defrost a turkey fifty days in advance and that it's absolutely necessary to have a meat thermometer if you want edible turkey, then what could go wrong?

So based on my personal experiences, if you want to have the best stress-free thanksgiving ever, then take the following advice:

So if you keep all of these practical tips in mind, then you should be good to go. But actually who cares about the day of Thanksgiving?

Everyone knows that the leftovers are the best part anyways. And that leads us to this very special sandwich.

So go ahead, put on your jeggings, pour yourself a stiff drink, and get ready for some deliciousness because shit just got real.

You know all that soggy leftover stuffing? Yeah?

Well, put that slop into a waffle press and get ready to make the best thing that's ever been created... besides ---. Then add some muenster cheese, a little bit of crappy cranberry jelly, and a big ole heaping pile of mashed potatoes and grill it.

As Adina, my boss and #1 homey from S.W. Basics would say, "if you make this sandwich, you make turkey the side". And I say TRUE DAT, Adina. True dat. Let's get started.

What Are Stuffing Waffles? 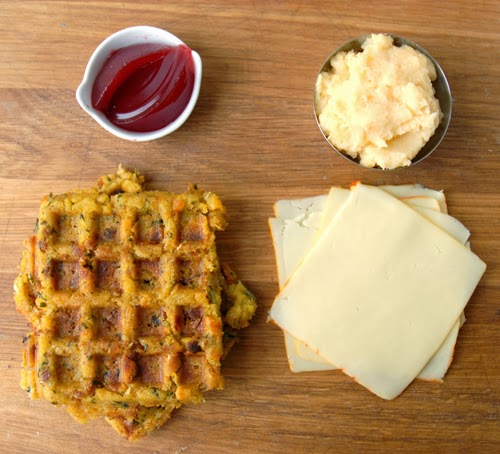 Let's begin by talking about the greatest thing that I've ever done in my life.

It's not some amazing volunteer gig or that time when I rescued a baby sea otter from the middle of the street (that didn't happen, it would be cute though!), nah, it's when I discovered that you could put stuffing mix into a waffle iron. 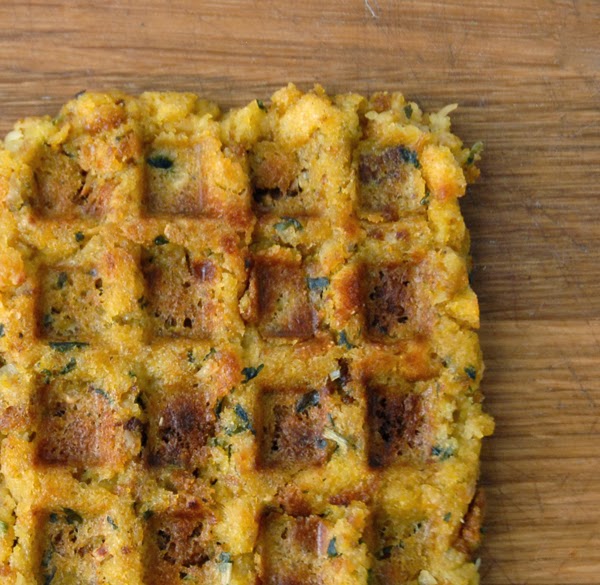 Just two simple words that have changed my life.

They're so easy to make and they're insanely addicting. Just image this - It's like all the delicious crispy stuffing parts are perfectly in proportion to the moist parts.

And that just happens to be the greatest thing ever.

So let me tell you how to make these. Basically you can just put your wet stuffing mixture into a waffle press, let it cook for a few cycles - they need more time than regular ole waffles.

After they start to get crispy and golden, let them sit some more so they can firm up then they're ready to be used!

Now that the waffles are ready, let's move on!

Add some of your knock-off Aunt Lorraine's famous mashed potatoes, be sure to really mash the taters into the nooks and crannies of the waffle.

It's like perfectly made little pockets so why not fill they with mashed potatoes? WHY NOT?! 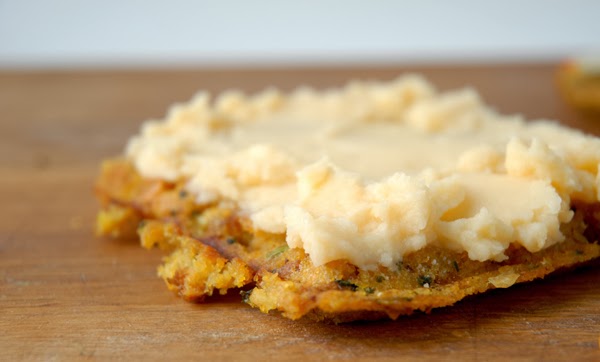 On the other side, repeat the same process but instead use some cranberry jelly.

I'll go ahead and put this out there, I am a fan of the crappy stuff.

I don't want any chunks, or berries as some would say, in my cranberry jelly.

No. I want that ultra-smooth, deliciously-weird, and consistently-gelatinous goodness that I remember from my childhood.

And I want a lot... but you could add however much you like.

That reminds me, you could also add turkey at this point.

But if you're too poor busy like me and don't have money time to make a turkey twice, or if you ran out of turkey and had no leftovers, then you can be on my team.

Otherwise, eff off! Jk. Jk. I love you forever. 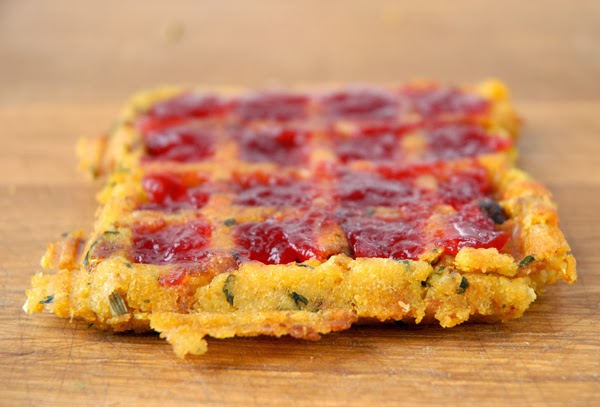 I added three for good measure because I want excess of pretty much everything in my life.

And who wouldn't want want extra muenster. Dumdums, that's who.

And did you know that muenster has a super high percentage of butterfat so it's basically the butter of meltable cheeses. Amazeballs. 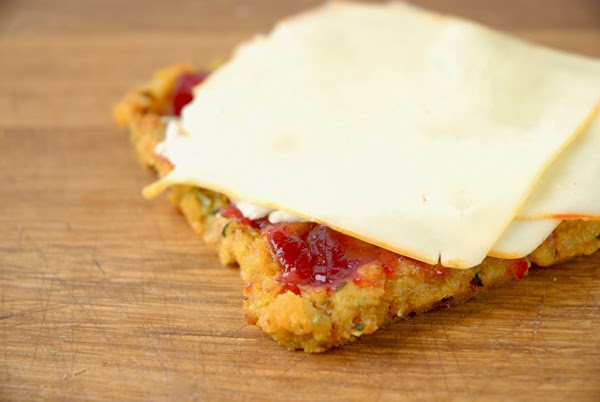 You can also call all of your friends into the room to let them admire what you've done.

I'm giving you a internet-pat-on-the-back as we speak! 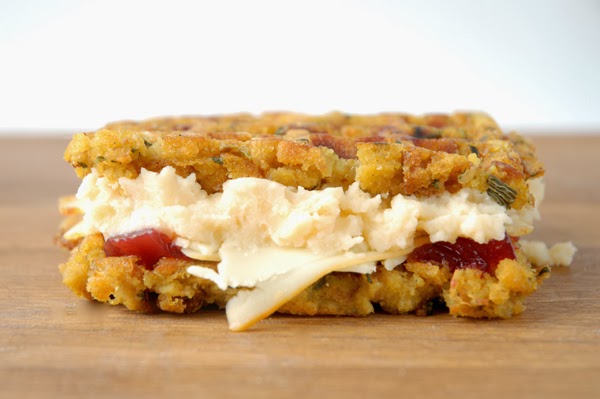 Because the stuffing was already so buttery, I didn't think it was necessary to add any more sandwich lube.

Strange, I know, especially when you consider what I just said in the last step, but you get it.

If I would have added more butter, it probably would have burned too quickly and would have gotten a lil soggy and I might have cried.

So anyways, just cook the sandwich for a few minutes on each side at a medium-low heat - remember the stuffing waffle is already cooked so you just want to get it hot enough to where the cheese melts. 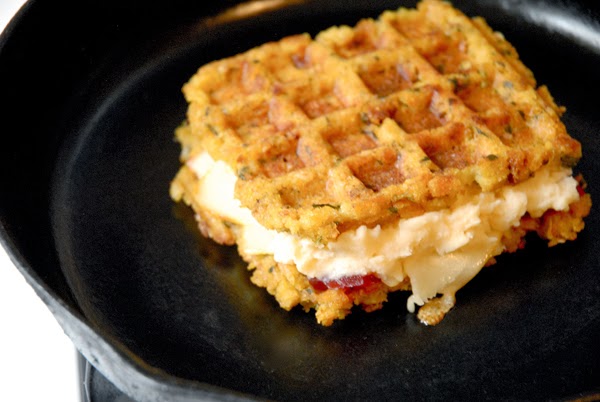 Once it looks all deliciously crispy and you can't wait any longer, take it out of your pan and let it chill for a sec.

During this time, you can run down to the liquor store or coffee shop and re-up on mimosas or whatever else you drink the day after Thanksgiving.

Then indulge and enjoy the leftovers! 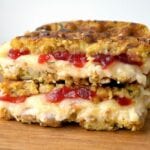 Turn your leftover stuffing into waffles then turn it into this tasty Thanksgiving leftovers grilled cheese!