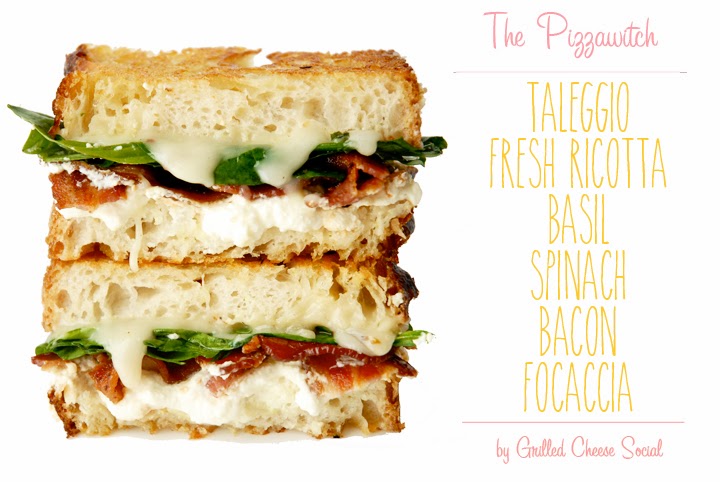 I've spent my entire life horrified of the possibility of being scared but also completely obsessed with spooky things. I was the type of kid that rented Goosebumps from the library, proudly carried 'em around all week, ogling at the awesome cover art, only to return them unread because I would get paralyzingly scared of where my mind might wander. If I had to go to the bathroom in the middle of the night, I'd sprint. Taking trash out after dark? No effing way. If my mom didn't go with me, it wasn't happening. When I'd take off my coke-bottle lensed glasses at night, my super bad vision would create shadows and shapes that looked just like people or creatures sitting around my room, waiting to choke me out in my sleep. Maybe I have a demented mind, well... I'm pretty sure of that,  but I've just always felt like I was going to get murdered by a scary clown hiding in the bushes or something. I don't know why or what made me so scared but I've just never been able to handle it.

It didn't stop there though. I've been avoiding scary movies my entire life. I remember making the decision that I wasn't ever going to watching anything scary again. When I was in 5th grade, My older neighbor friend made me watch Poltergeist with her and because I didn't want to seem like a pussy, I did. What happened after? Well, I ended up sleeping on a cot in my parents room for 6 months because I was 100% sure that I was going to get swallowed up by my closet. I'm still this way. I always check my non-existent NYC  closets, under my bed, and behind the shower curtain just to make sure there's no angry ex-boyfriends psychopaths hiding anywhere.

When I moved to NYC, something changed. Maybe it was the lack of scary bushes combined with constantly lit streets or something like that, but I was no longer scared of possible goblins with giant claws or a vampire with the need to feed. No, instead I decided that it was probably a good idea to focus my fear on real things like the possibility of getting mugged at 4am on Bushwick or some freak show pushing me into the subway tracks when I wasn't looking. So since it's Halloween and I've realized that I haven't really felt that scared, panicky, heart beating in my throat kind of feeling in a while, I decided that it would probably be OK if I watched a scary movie... alone... without roommates or friends or a body guard.

And ya know what? I did it AND i slept soundly. I mean of course I woke up in the middle of the night a few times because it felt like someone was standing over me, but I calmly told myself "be chill girlfriend, you could seriously use some beauty rest, you're lookin' busted these days" and then there I went, back to sleep, without one horrifying care in the world. So because I'm super excited about this new development, I also thought it would be fun to revisit something else that I hadn't done in a while. That's how this pizza grilled cheese came to be. I did one a few years ago [HERE] but I wanted to make a fresh and new one so here it is - a white pizza inspired GC with taleggio, fresh ricotta, basil, spinach, BACON, and some red pepper flaked olive oil all on a sliced focaccia loaf. 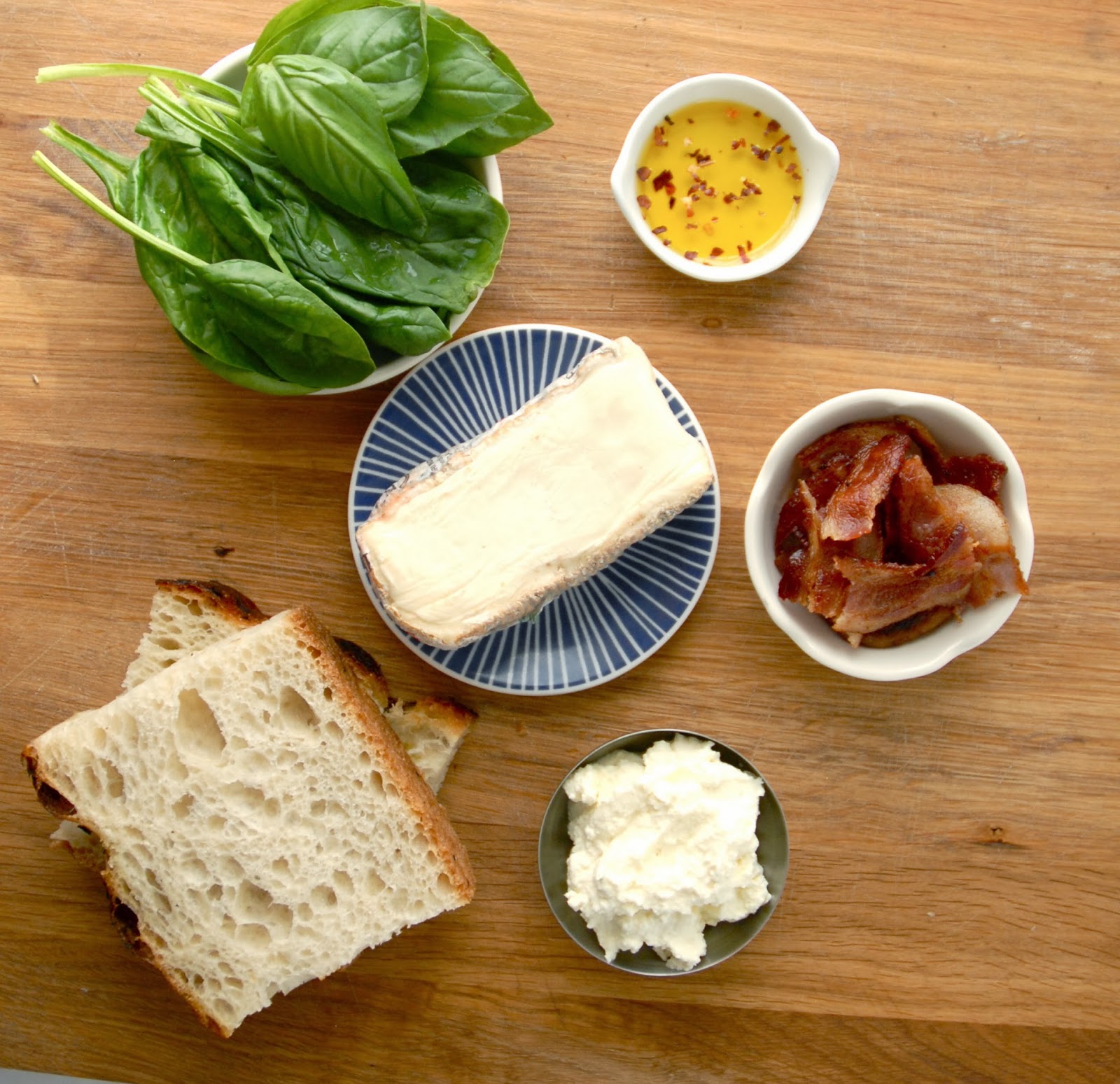 I started with the fresh ricotta because if I hadn't, I would have seriously just ate the whole thing before the sandwich was event built. I actually have an addiction problem with the fresh stuff. It's seriously the best thing my body's ever tasted.

So do as I do, start with the fresh ricotta, and smear on a super thick coat. Sprinkle a little bit of sea salt on top to make it have an extra pop of flavor. 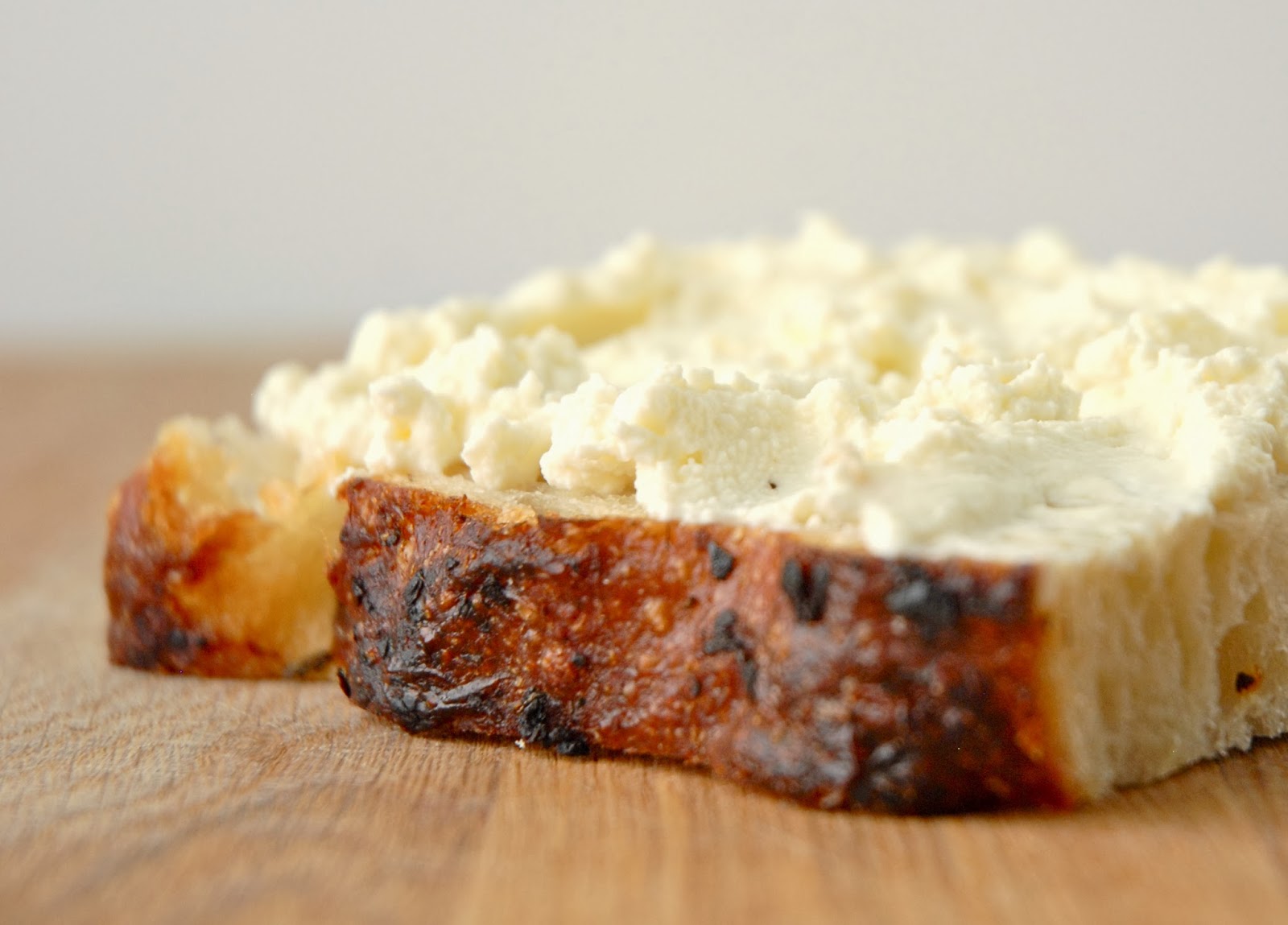 Now it's bacon time which I'm pretty sure is everyone's favorite time ever in the whole wide world. Except for you veggies, I'm so sorry. Y'all should just omit it and then re-evaluate your life choices. JK sort of. 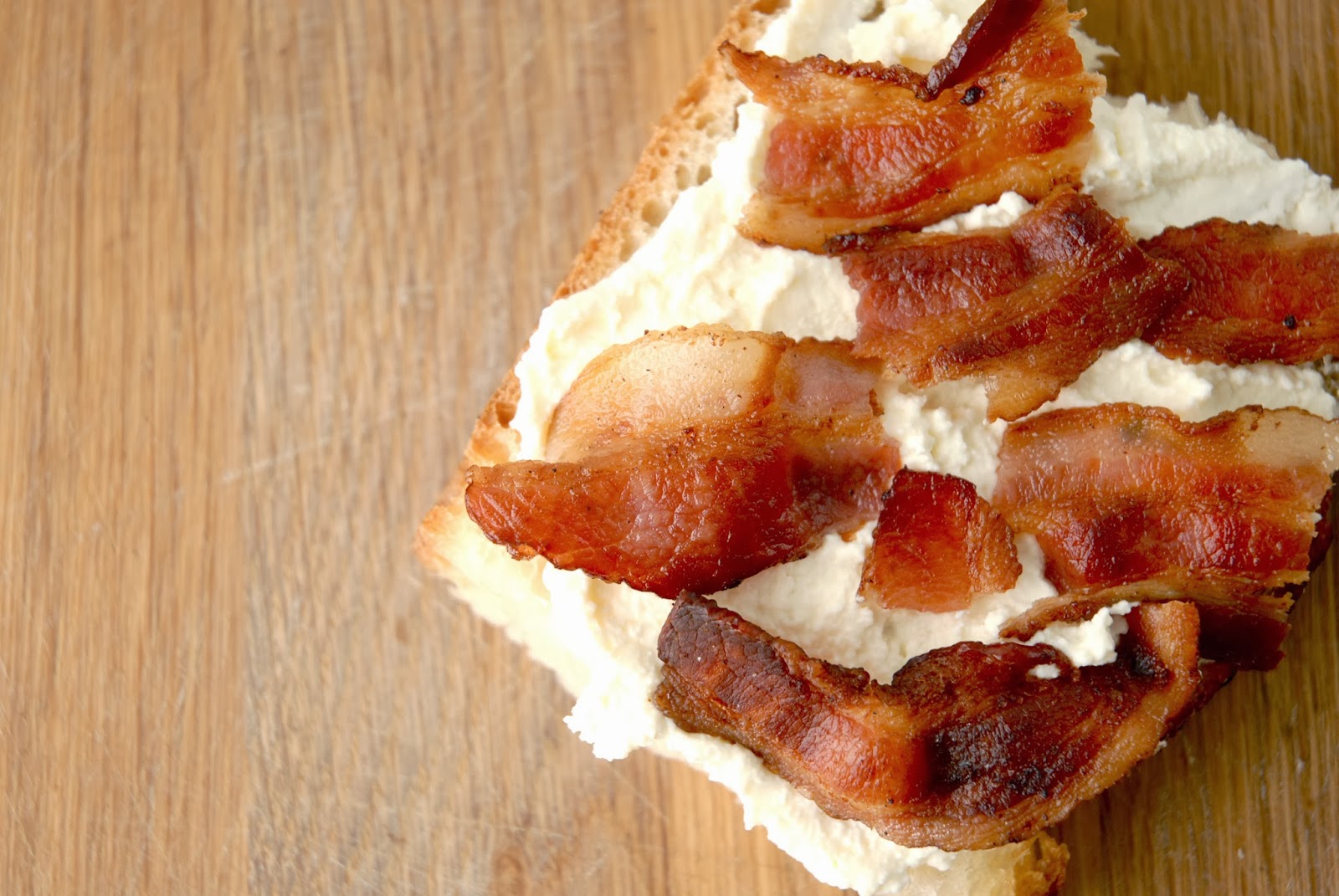 Ok, onto the next step. Basil time! Just add a few fresh basil leaves for some added herbal earthiness. 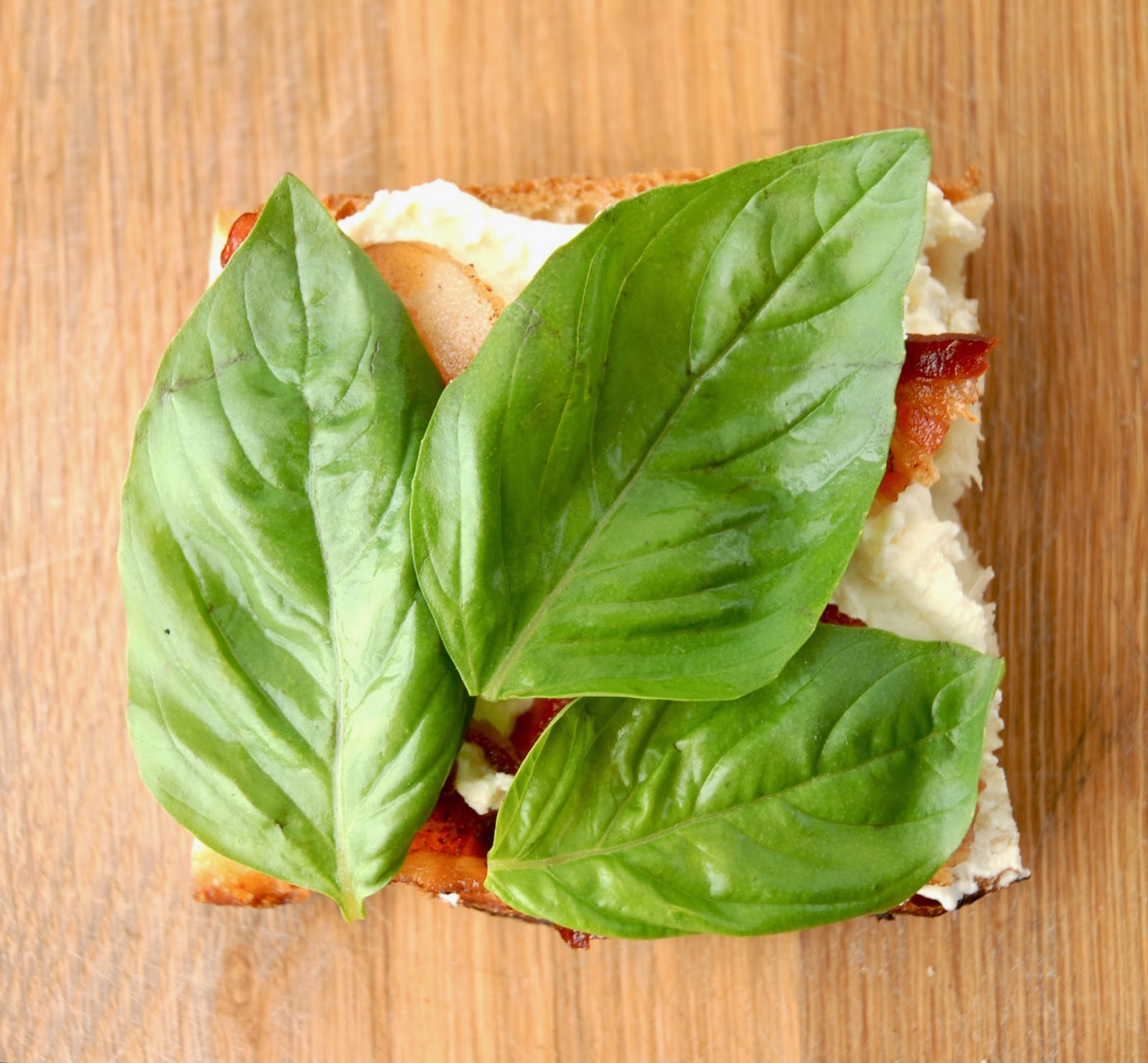 Pile on a ton of fresh spinach... 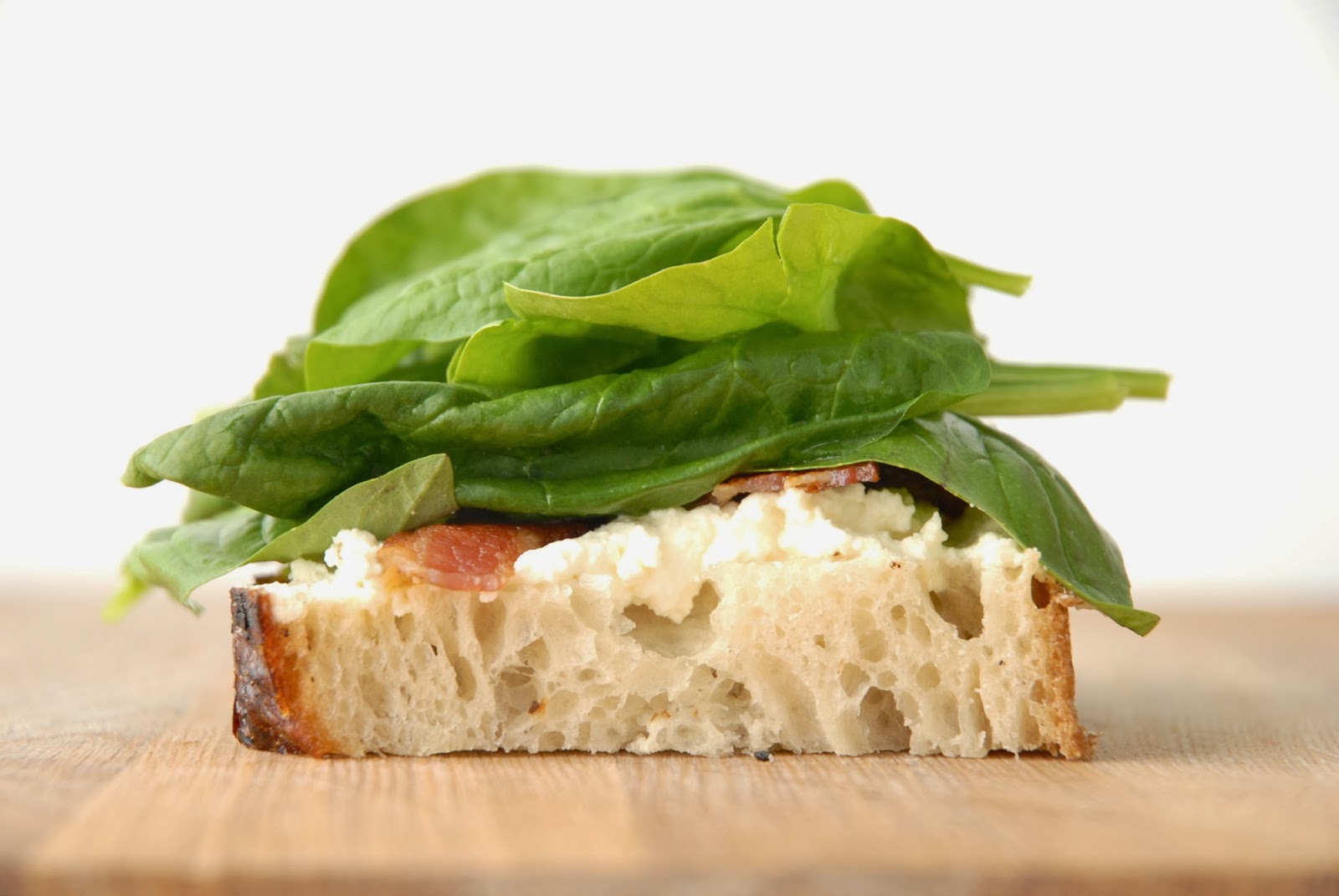 Then top with some semi-thick slices of Taleggio.

If you're not familiar with taleggio, then let me fill you in. It's a washed-rind cheese that has a texture similar to brie. Although mild to the taste, it packs a super strong flavor and a pretty serious aroma along with a fruity tang. It also melts perfectly and without much heat. It's the shit. 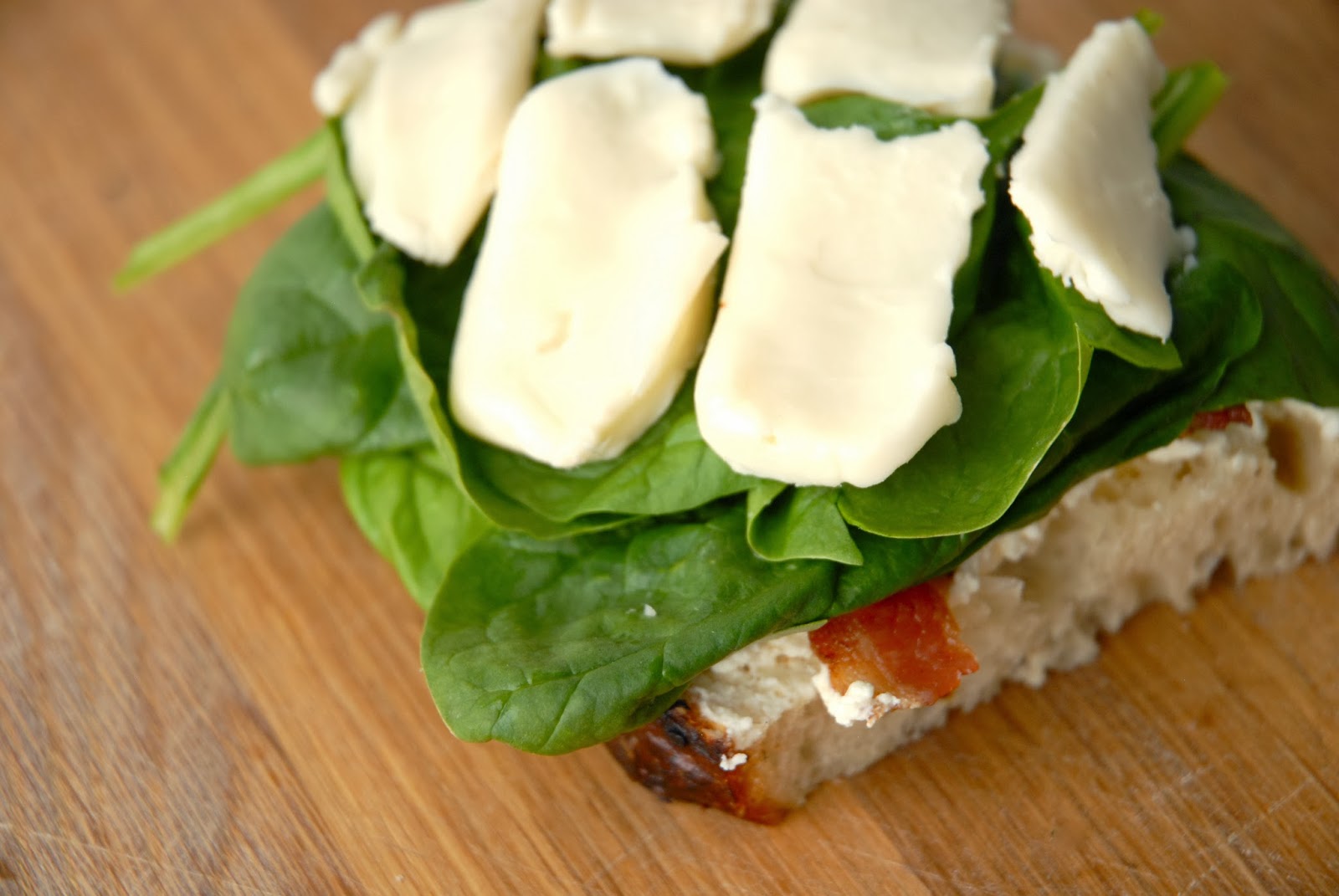 Since that's all of the ingredients, go ahead and top your sandwich with the other piece of bread. 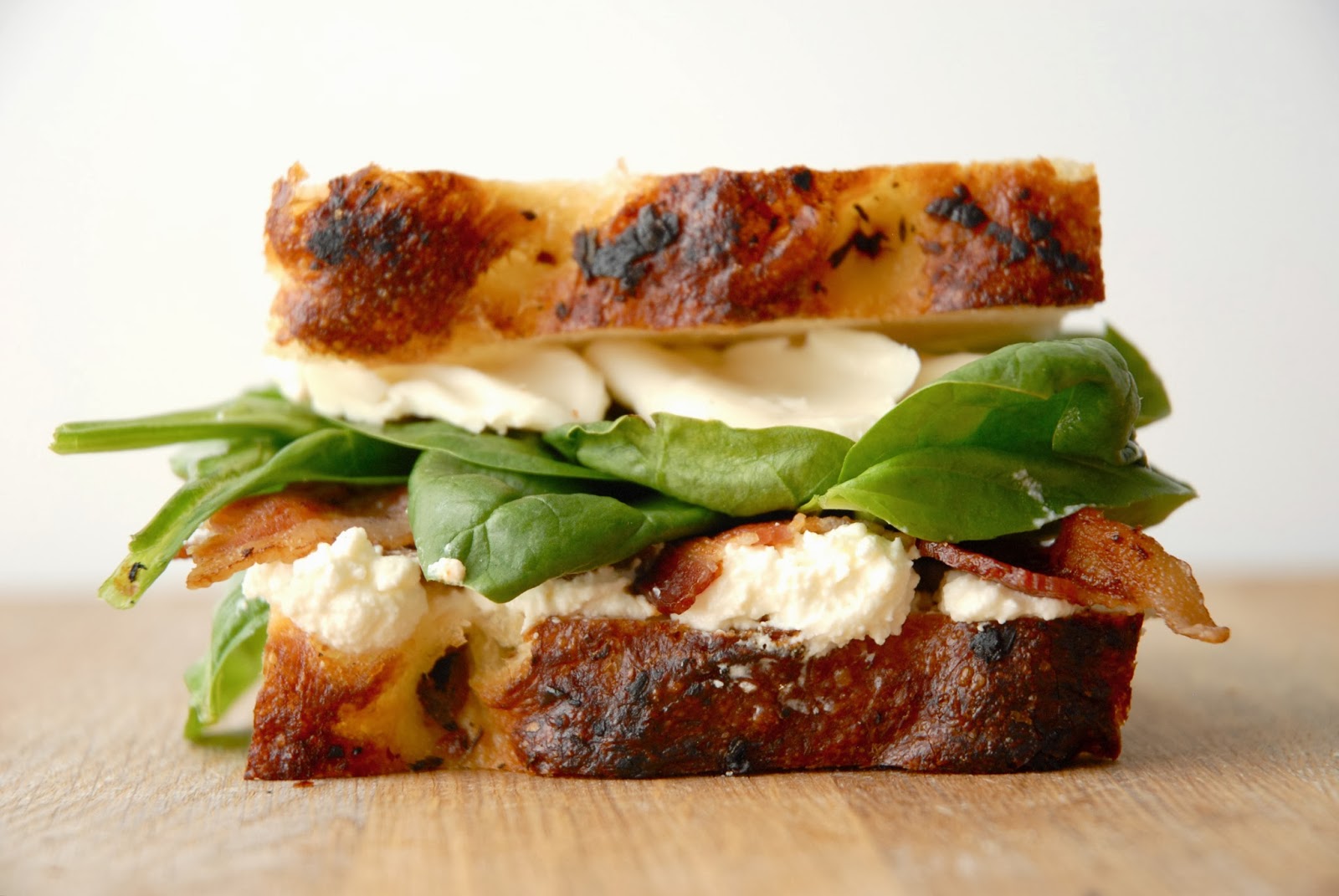 Drizzle a little bit of olive over both sides of the sandwich and sprinkle on a pinch of red pepper flakes if you'd like. C'mon, you gotta do it - it's pizza themed after all!

Now turn your burner to medium and let that baby cook. It''ll just take a few minutes until the cheese starts to melt and the the bread crisps up into an irresistible golden crust. 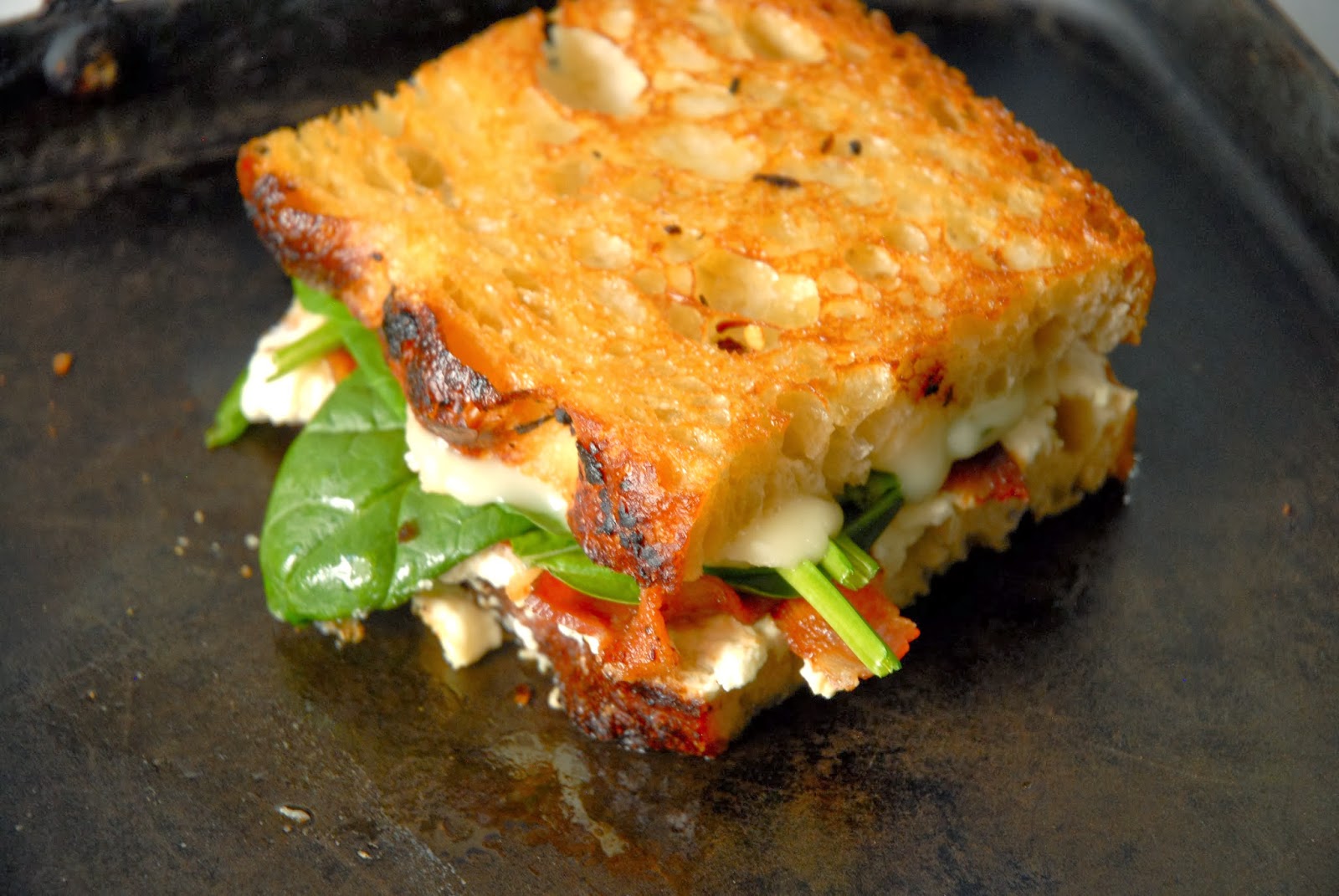 Once it's done, take it out of the pan and let it sit for a sec. Because the taleggio melts pretty rapidly, you'll need to let it sit  or else it's all going to fall out all over the place. 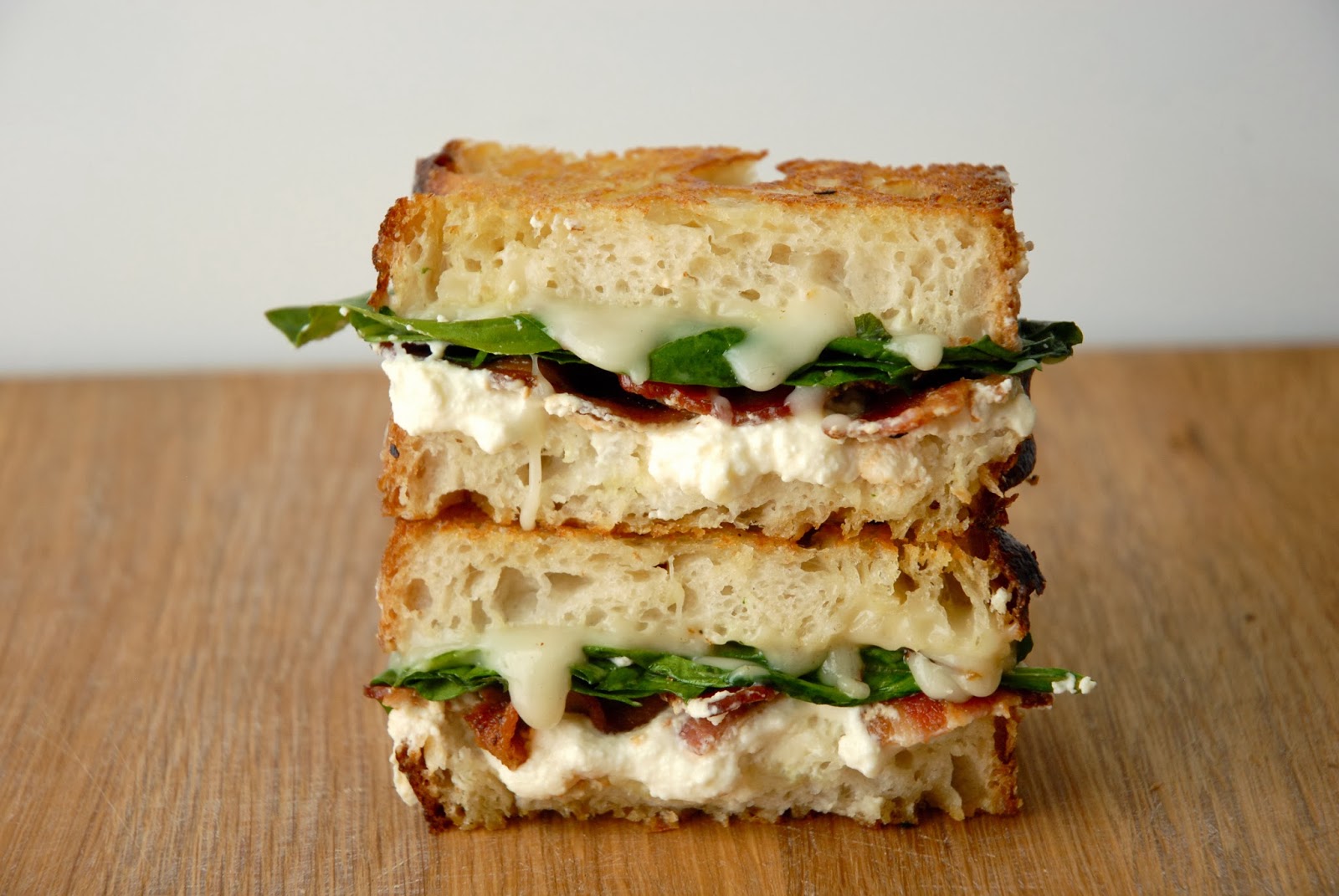 So now that I ain't scared of nothin'...except creepy babies, mean boys, psycho girls, spiders in my shoes, running out of fresh ricotta, the mad hatter from alice in wonderland, sharks, big snakes, getting frostbit, being trapped in a walk-in freezer, maggots, any bug that eats dead things, tiny cockroaches, big cockroaches, humans dressed up as clowns, people that put a slit in their tongue, zombies, vampires... wait I actually like vampires, never mind, alligators, crocodiles, mean bears, being alone when I grow up, being abandoned when I actually like someone, and the like.... let me know what scary movies I've been missing out on!