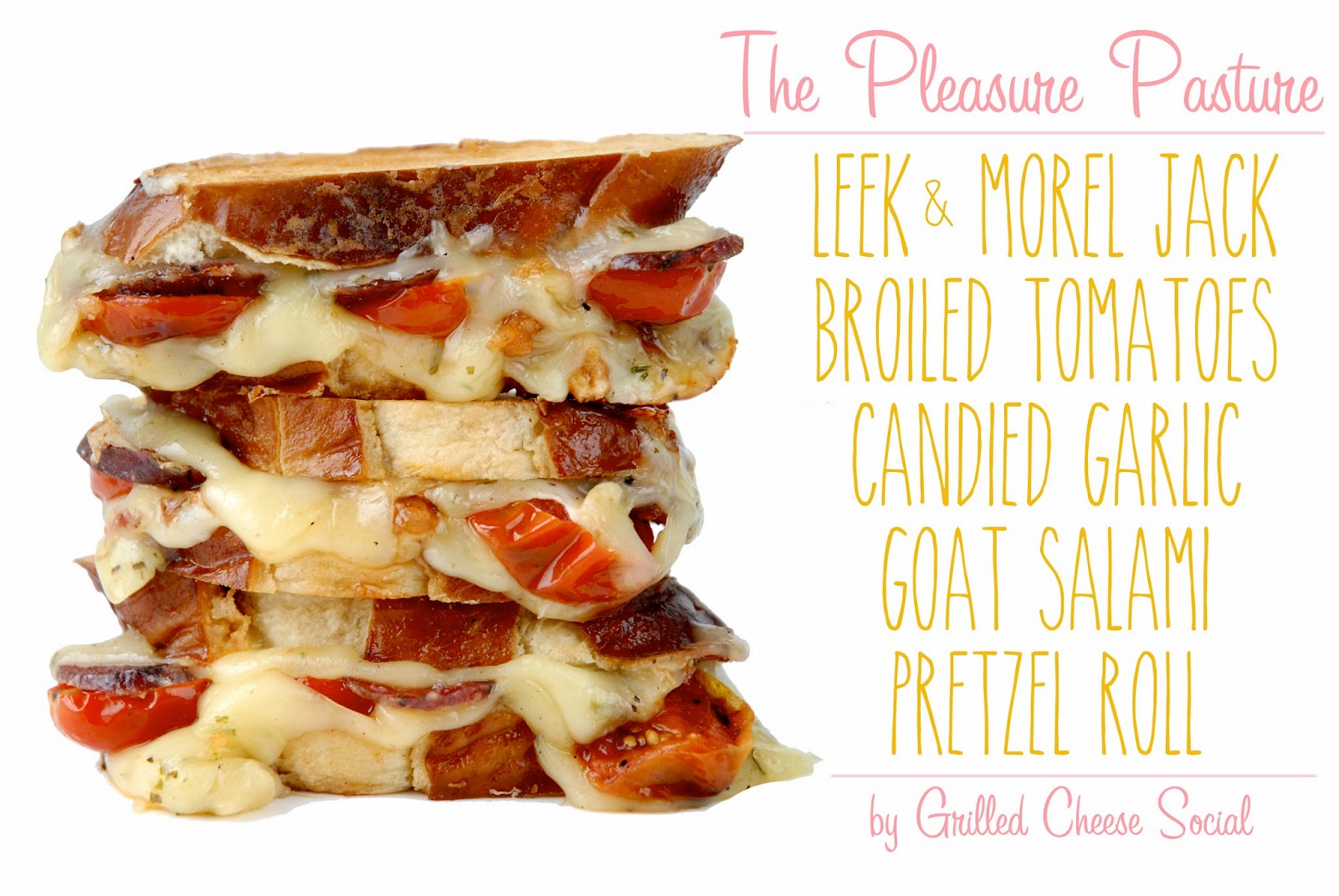 Hey stranger! Sorry there hasn’t be a new post in like whole 2 weeks. I know you’re probably pulling out your hair all stressed out, wondering what the hell happened to me and why I haven’t delivered you another melt-your-brain grilled cheese recipe. No? Oh… errrr… ummm… well l can explain. After getting about a thousand phone calls from my Mom family begging me to come work for visit them, I finally used up all my airline points and booked a ticket down South. You see, after 4 years of construction my parental units finally opened this super awesome new B&B – The Black Dolphin Inn – in New Smyrna Beach, FL and it was time I came down and saw the meltdowns that were about to ensue refurbished historical spanish villa in action.

I’m so proud of them and the hotel is totally insane so let me gush for a second. It’s located on the river, has 14 awesome eclectic rooms with everything from stuffed baby alligators to vintage aquariums, boasts a 5 star rating on tripadvisor.com, and has gotten an insane amount of recognition just for being opened only 6 months. If you’re ever in The South and want to stay at a crazy-nice mid-century modern old-Florida mansion on the river with some serious Southern hospitality (did someone say shrimp’n’grits?), then The Black Dolphin Inn is where you should head. And as for the town of New Smyrna Beach, well besides having beaches that you can drive on, endless amounts of fresh seafood, and most importantly all the hot pro surfer dudes you could ever want, New Smyrna is also right next to Cassadaga, the spiritual and psychic capital of the world.

COOL, right?! I know! And if it’s not obvious from my instagram feed, then you should know that I’m basically totally obsessed with all things creepy so I got super excited when my BFF, my lil bro’s new girlfriend, and I decided to shoot over there for a spooky afternoon. So like any idiotic group of giddy girls in a horror movie about to get murk’d, we found a scariest shack that had no electricity and a pagan woman named Glo Lady to read our cards. Of course she knew everything about my life and it was totally awesome. And although I don’t swear or abide by futuristic readings, I’m totally into it… Except that whole part about me getting the baby card. Yeah, well, umm, I’m nowhere near ready for that to be a part of my life.

On the other hand, remember a few weeks ago when I asked you all to donate to my friends Kickstarter for The Underground Butcher? Well it seems my futuristic prediction was right and because they did it! They made their goal!  I’m so happy for them and you should be too, because that means that you will be able to get their meat just about anywhere sometime soon. Because i’m metaphorically peeing my pants in excitement for them, I’m using their salami one more time!  This sandwich has Wisconsin Cheese’s leek and morel jack cheese from Springside, candied garlic, broiled tomatoes, and Underground Butcher‘s goat salami all on a pretzel roll. It’s insanely delicious and complex and I’ve been told it brings good luck.

So here we go… 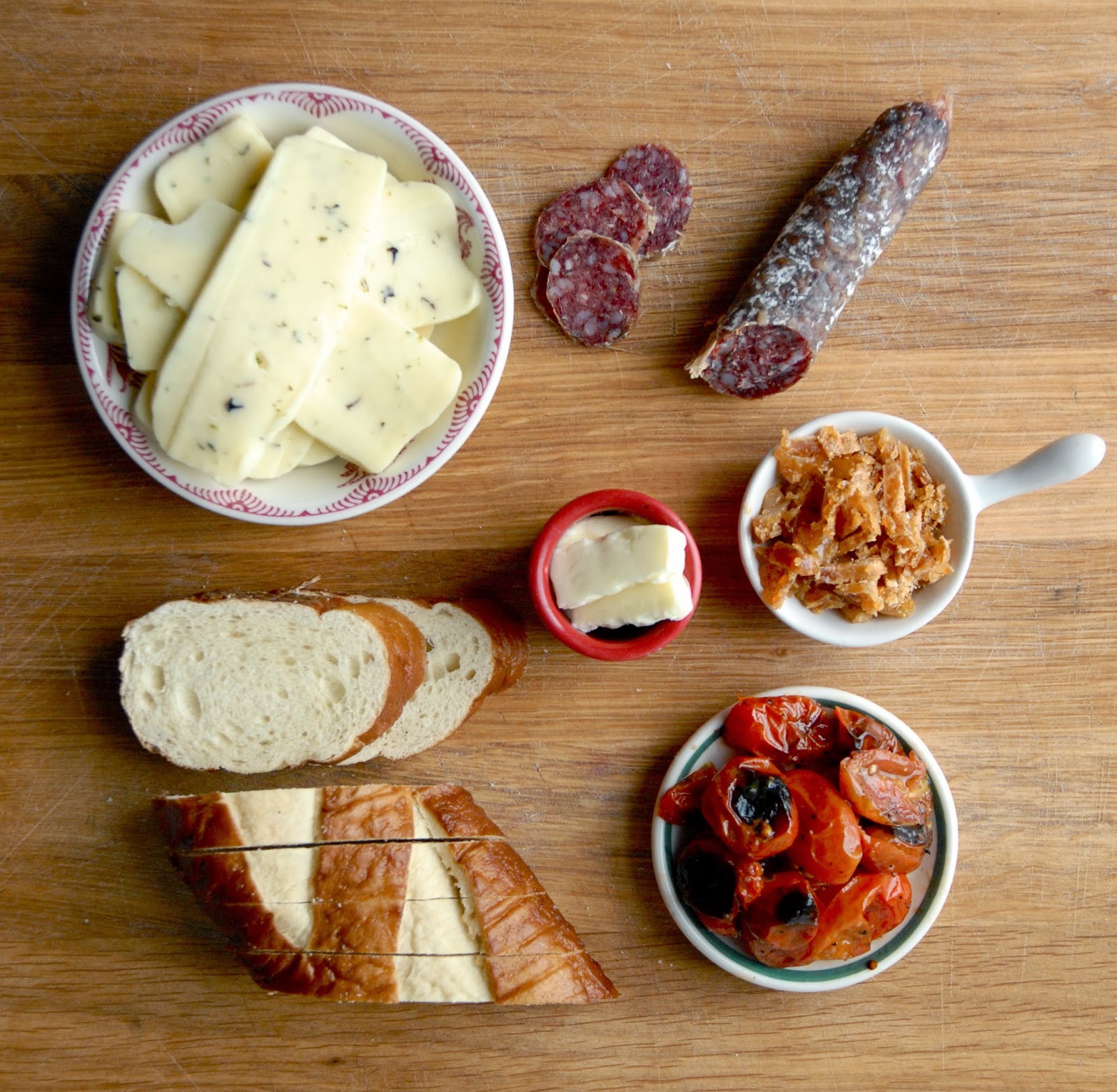 I try a lot of crazy cheeses (if you ever see me in person, don’t forget to ask me about coconut gouda) but I’d never even heard of a jack made with leek and morels. Just from the name I knew it was going to be nuts. I mean, come on, how fancy does that sound? Earthy morels meet fragrant leeks and combine with a sharp jack to create one super flavorful and meltable cheese that’s perfect for grillin’.

To begin, add a moderately thick slice of the cheese and plop it down on some pretzel rolls slices. 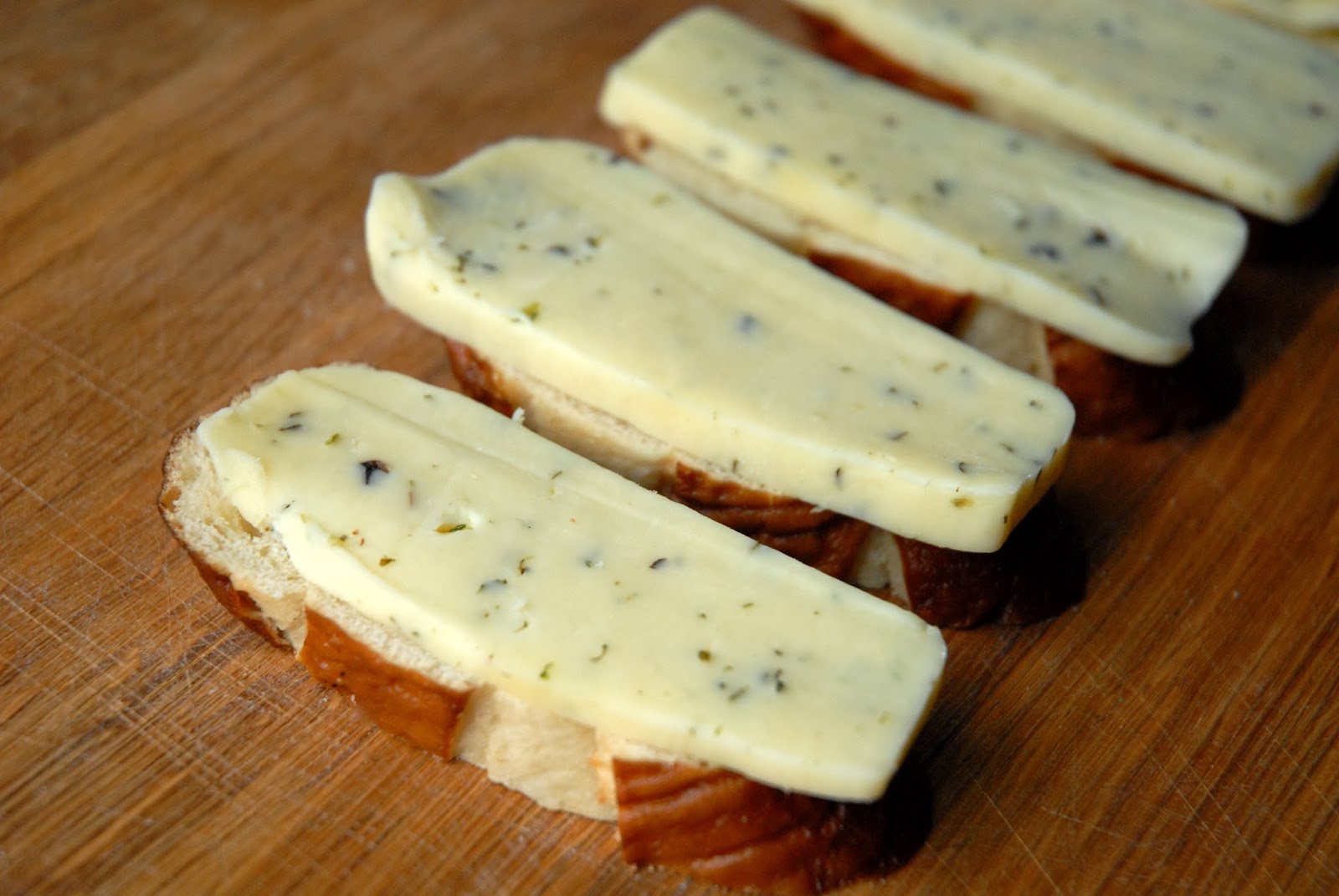 Now add some of that goat salami from Underground Butcher. It’s way more gamey and earthy than typical pork salami but I think it holds up perfectly against the woodsy cheese. To me, salami taste WAY WAY WAY better when they’re sliced super thin so follow my lead and try to get them as skinny as possible.  Lay on a few pieces and make sure to gobble a few down. 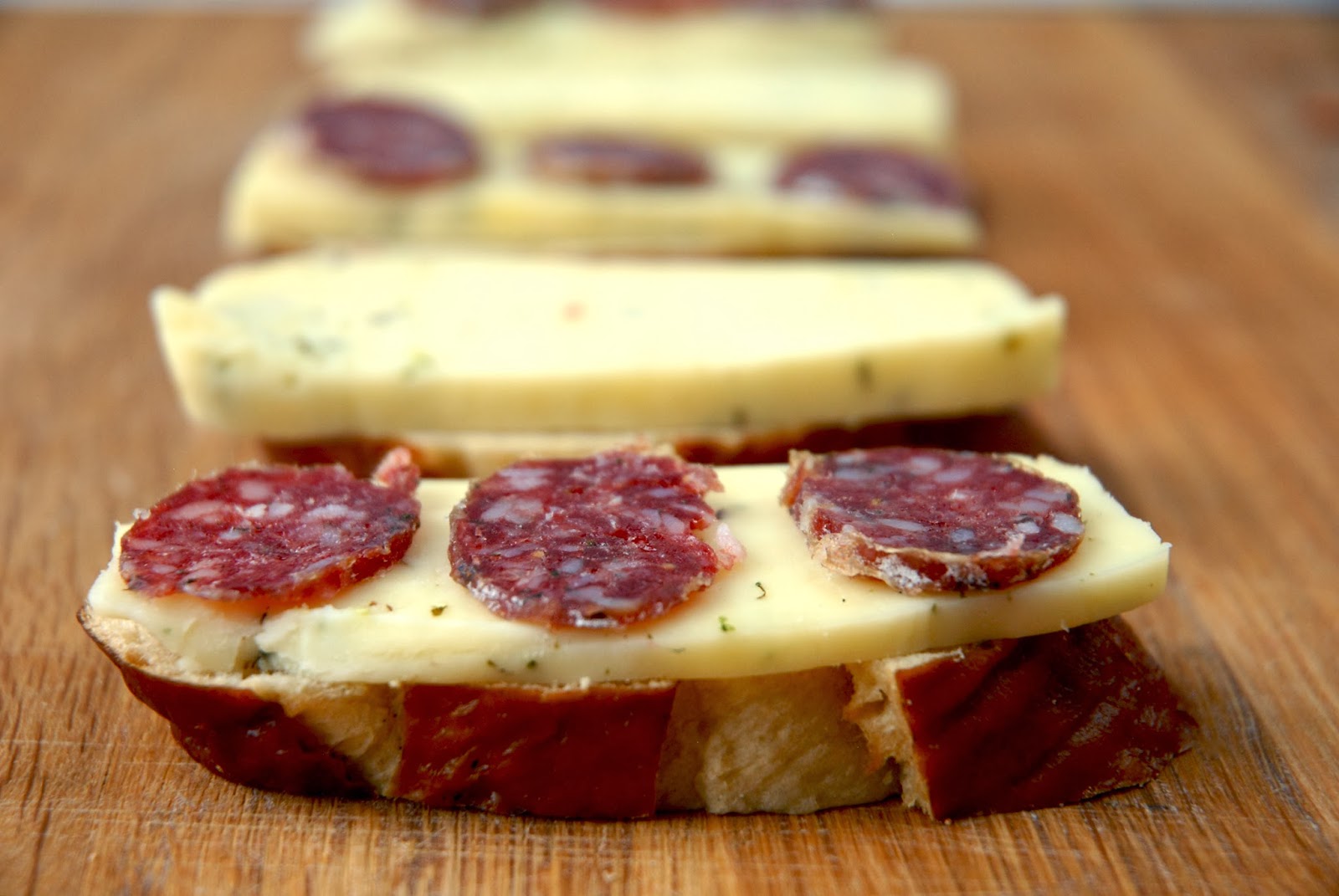 Now it’s time for the broiled tomatoes. These are super simple to make. Basically slice cherry tomatoes down the middle, drizzle with olive oil, salt, and pepper and place in your broiler – seed side up. Let them broil for a few minutes until they start to pop, ooze, and eventually caramelize. Then put them in a bowl and cover to let them keep steaming. Oh yeah. 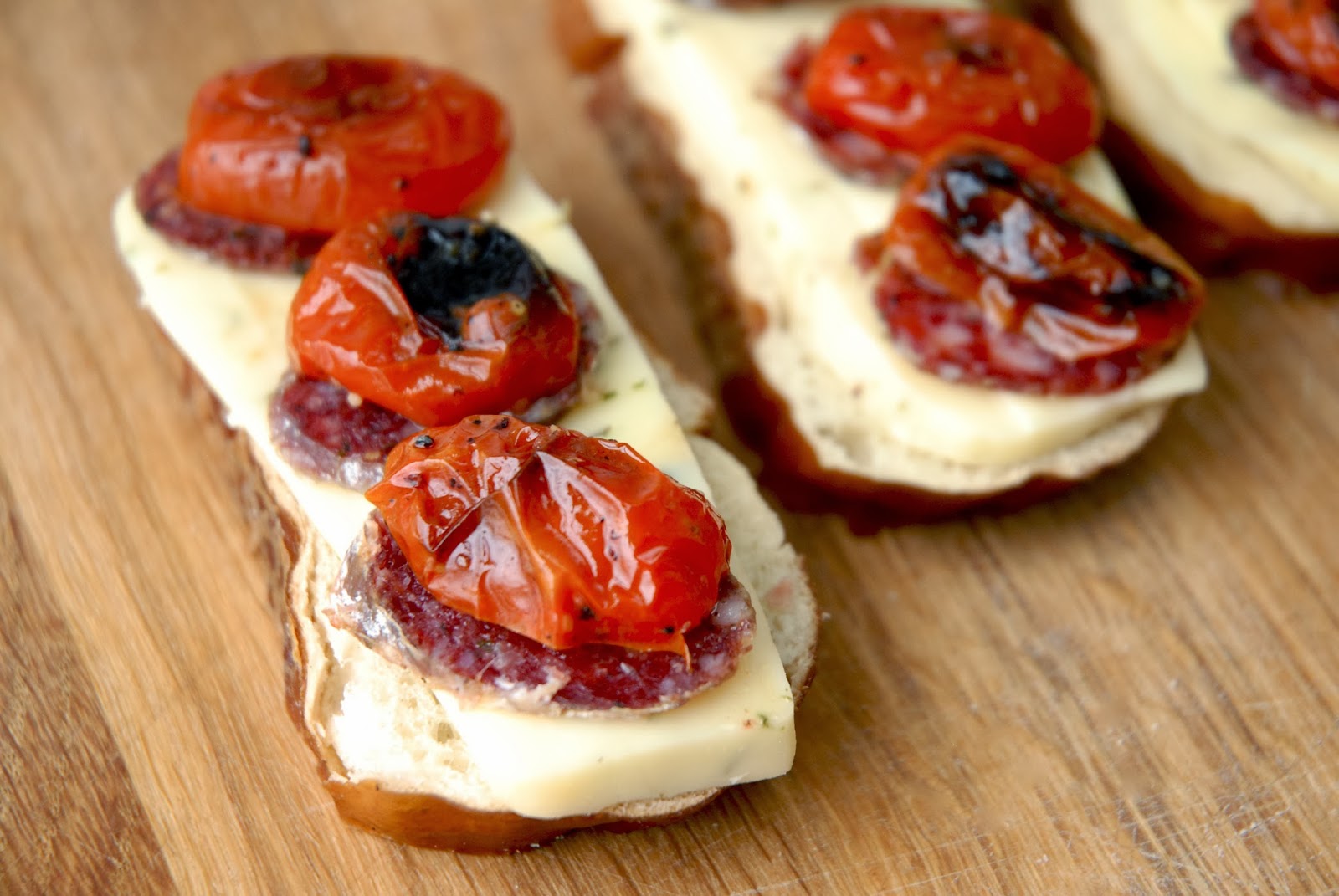 Here’s where the craziest ingredient comes in – the candied garlic. I thought of this after having bacon brittle in Wisconsin. It got me thinkin’ what else I could brittle? Oh yeah, GARLIC. It sounds complicated but it’s actually super easy. Watch my video on instagram to see how I did it – HERE.

Once you have this sweet, spicy, and crunchy treat read, crack it and sprinkle it on top of the sandwich. It not only gives it a super nice crunch, but it also adds an extra sweet note that is much needed in such an earthy sandwich.

Now add another slice of cheese and the top piece of bread. Omy omg ALMOST DONE! 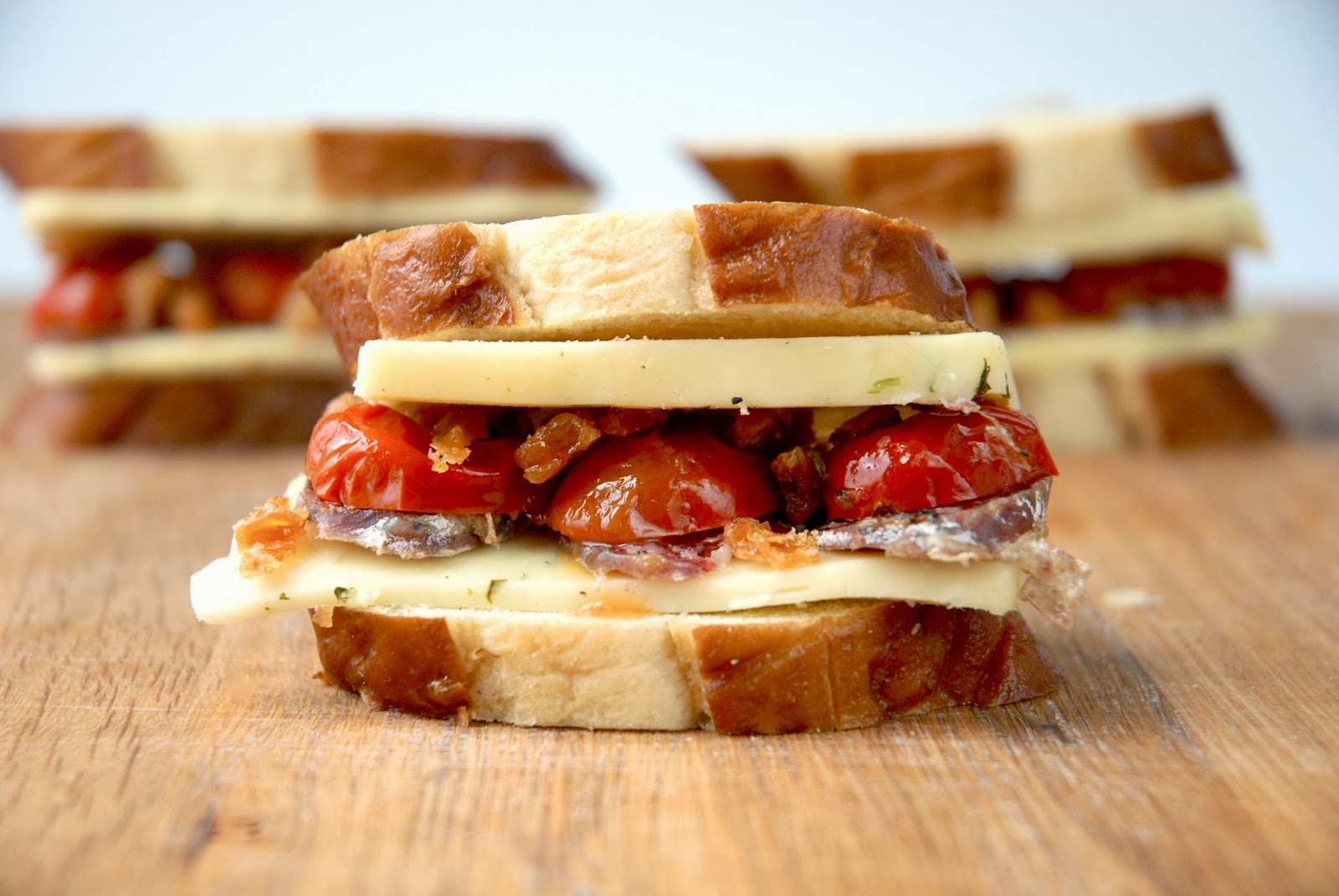 Now butter both sides of the bread, turn your burner to medium heat and place ’em in. 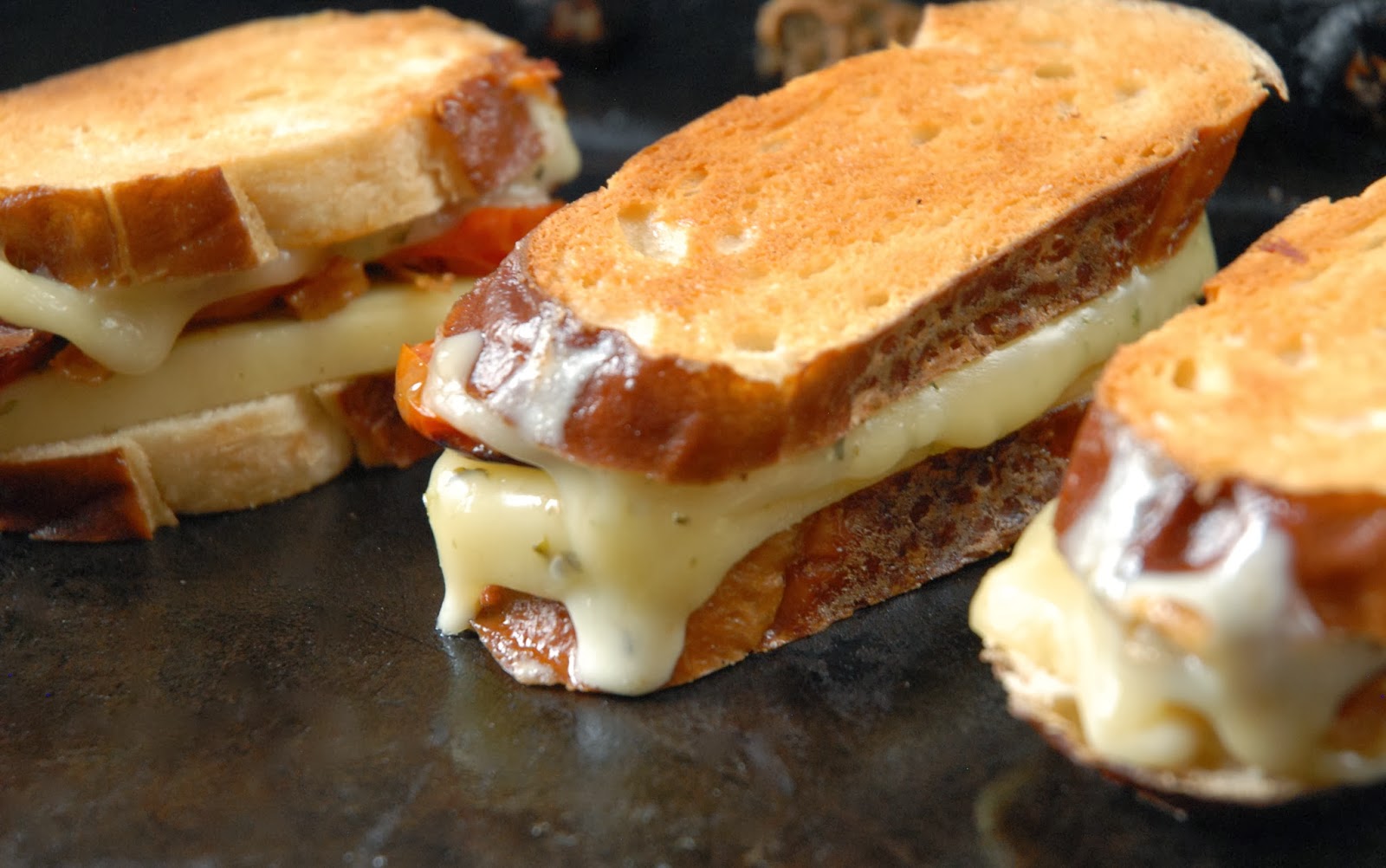 After a few minutes, they should be all golden and brown and irresistible. Flip, repeat, and invite some of your BFFs over. 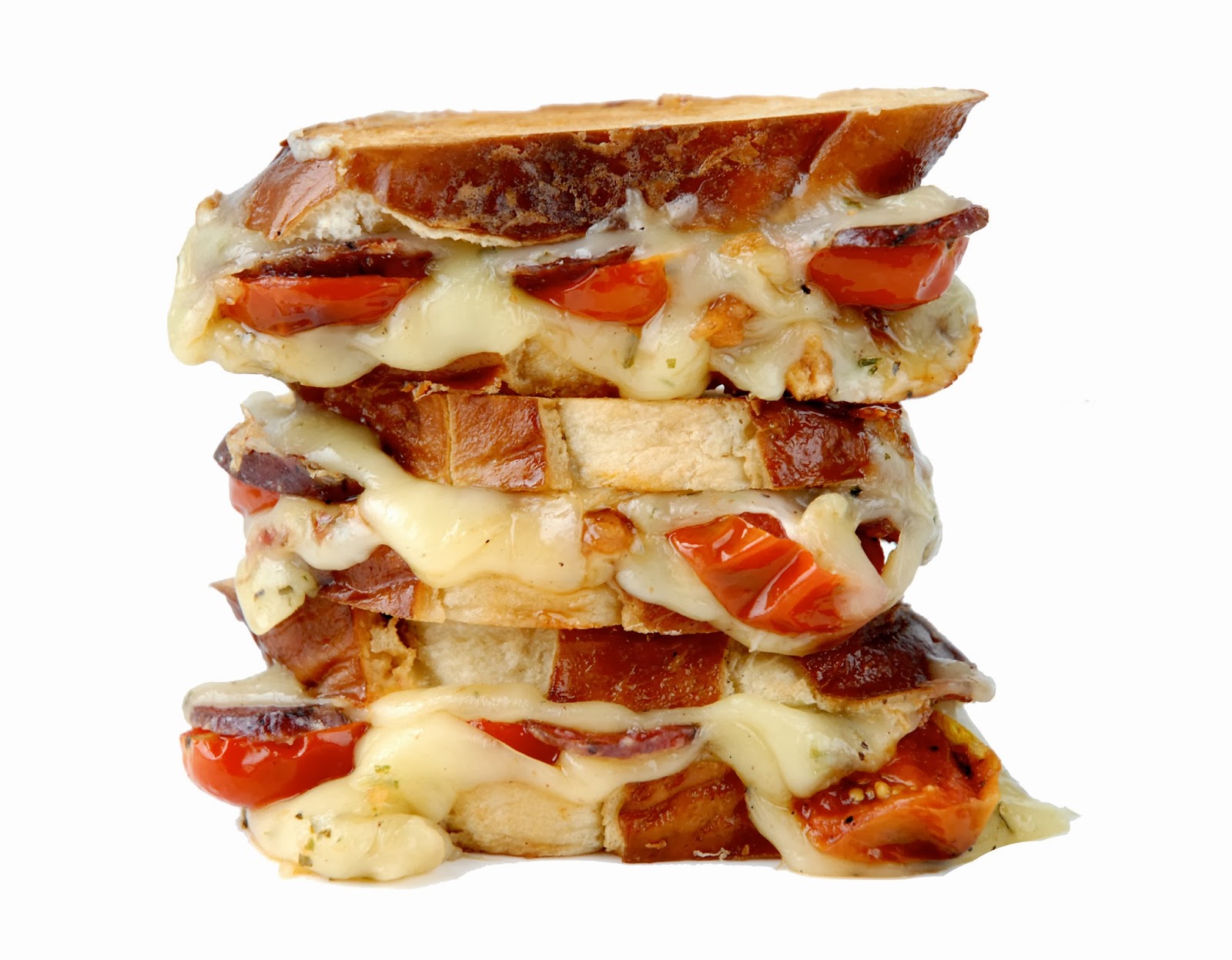 Have you ever gotten your cards read or have had some sort of existential experience that involves a future baby? Please tell me. It would save me/make my day!