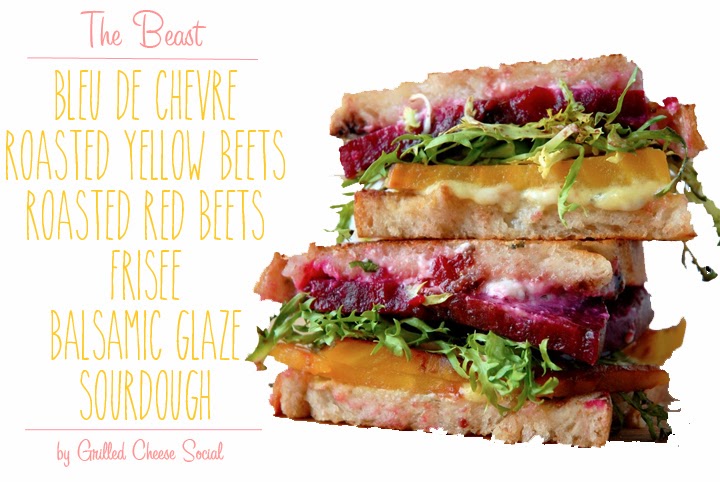 Yesterday I got drunk (off jell-o shots nonetheless) and tried my hand at writing under the influence. I'd always heard that a ton of literary superstars have used this method to get into flow so I thought what better day than yesterday. Then once I got drunk, I got side tracked, ordered a bunch of Thai food, ate some more jell-o shots, watched some Ted Talks on Netflix, and let my computer die, which then led to the stupid ass the most hilarious blog post I've ever written being forever lost on the internet. Shit. Well, that sucks, huh? Maybe it wasn't the best idea but hey it was an excuse to get drunk by myself off of rainbow jell-o shots at 2 in the afternoon which most people probably haven't done, ever will do, or have any desire to do so at all. So yeah, that was pretty great.

From what I remember, I went on a pretty long tangent about these delicious gelatinous blobs of Smirnoff. My roommate and her girlfriend, who are both named Sarah (what are the odds?!), made insane neon-rainbow versions to celebrate PRIDE. And because they highly overestimated how many jell-o shots they could actually take with them, there were quite a few left for me.... including a giant cup of yellow, orange, and red leftovers that had my name written on it, well at least in my overexcited mind it did.

There was also a part about how the jell-o shots visually symbolized PRIDE - they were rainbow after all - but there was also a troubling realization that the amount of time it took to make these shots (you've got to wait 4 hours between adding each color) totally paralleled with how long it's taken our country to accept that love is love no matter who it's between. Which is like totally weird and sad, but I digress again. The last realization I remember having was that this sandwich almost looks rainbow which is a total coincidence! It's got the red/purple and golden beets against some vibrant green frisee and then there's the blue goat cheese from France that makes the spectrum almost complete. Oh, and the best part, this sandwich tastes so insanely good that it might even hold up against how much I loved eating those jell-o shooters, even with the memory of losing the blog post. But who cares, time to move on! Let's make this thaaaaang.

Get you some of these! 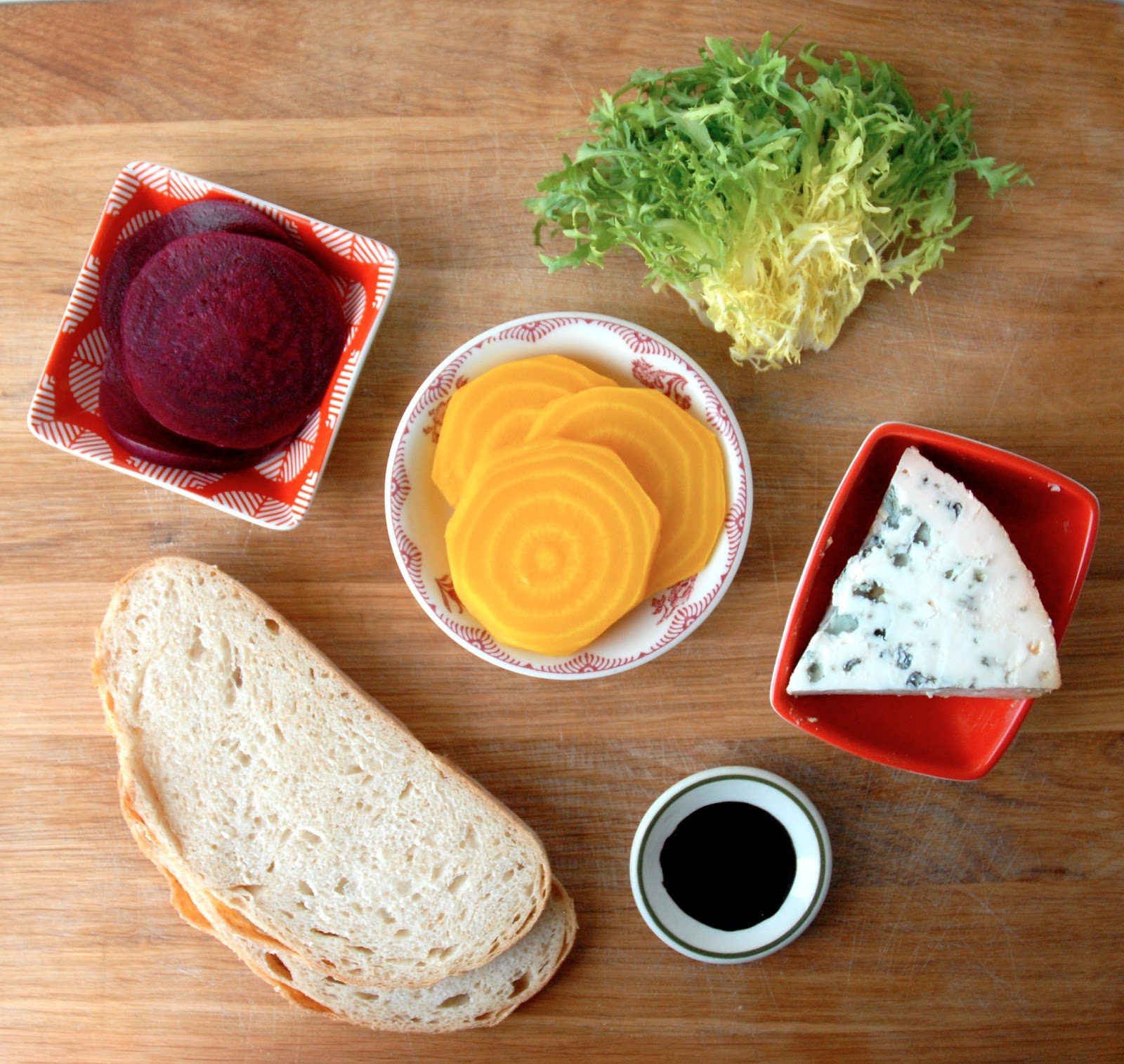 Even though it's unlikely that you have any jell-o shots on hand, I'm just going to go ahead and say begin making this grilled cheese by shooting a few. Then after you choke 'em down, gently break up your blue goats cheese, aka Bleu de Chevre from France, and place them evenly around one slice of bread.

Remember, although this blue cheese is super buttery, sweet, and delicious compared to its typical cow counterparts, it's also pretty strong so don't go crazy with it. 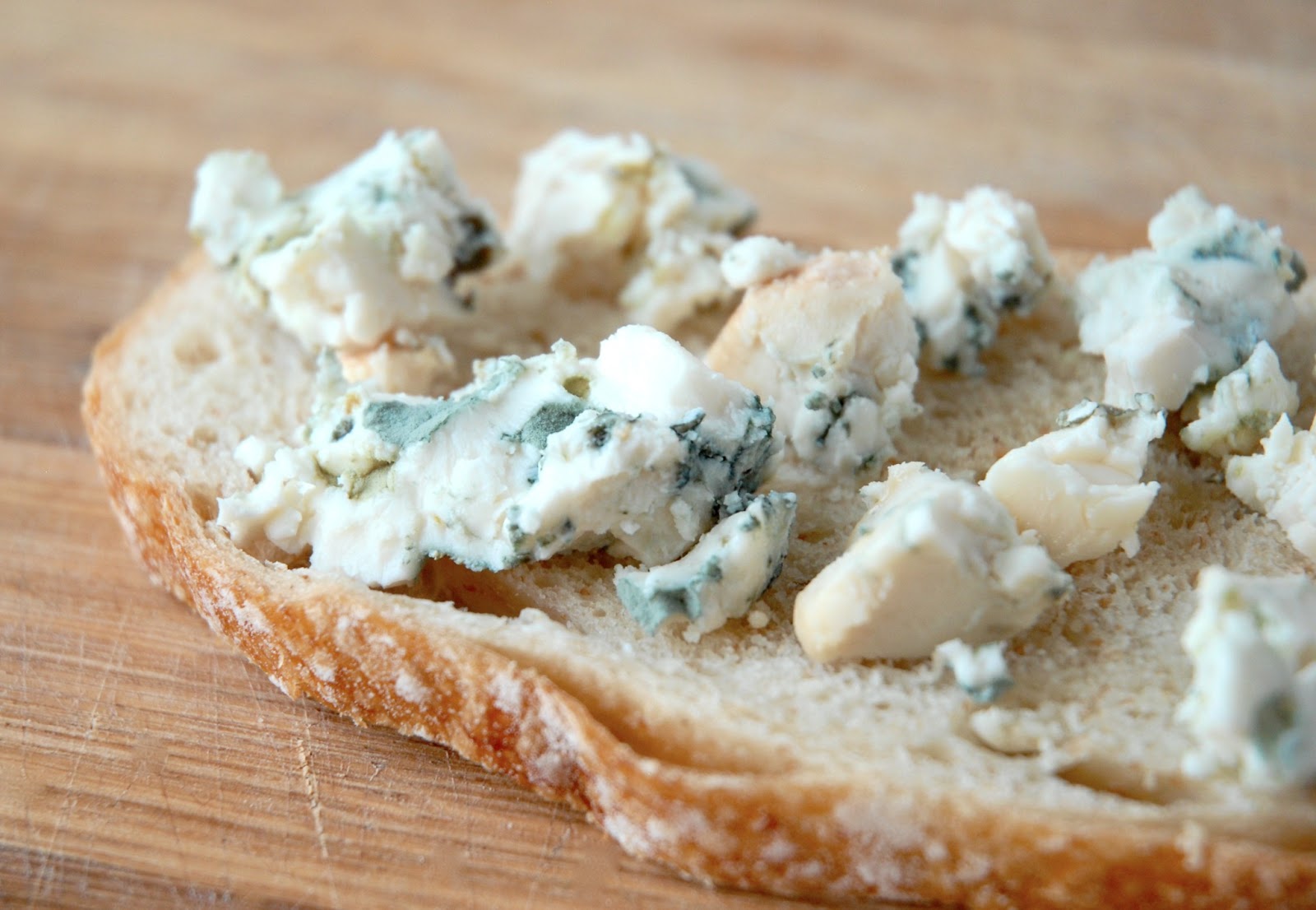 Then add some cooked beets on top of this. I started with the red beets but I bet it would be even prettier if you alternated colors.

Next, add some frisee and drizzle on that balsamic glaze. The frisee is sort of bitter compared to other lettuce but the balsamic glaze evens out the tang by adding a nice rich sweetness to the sandwich. 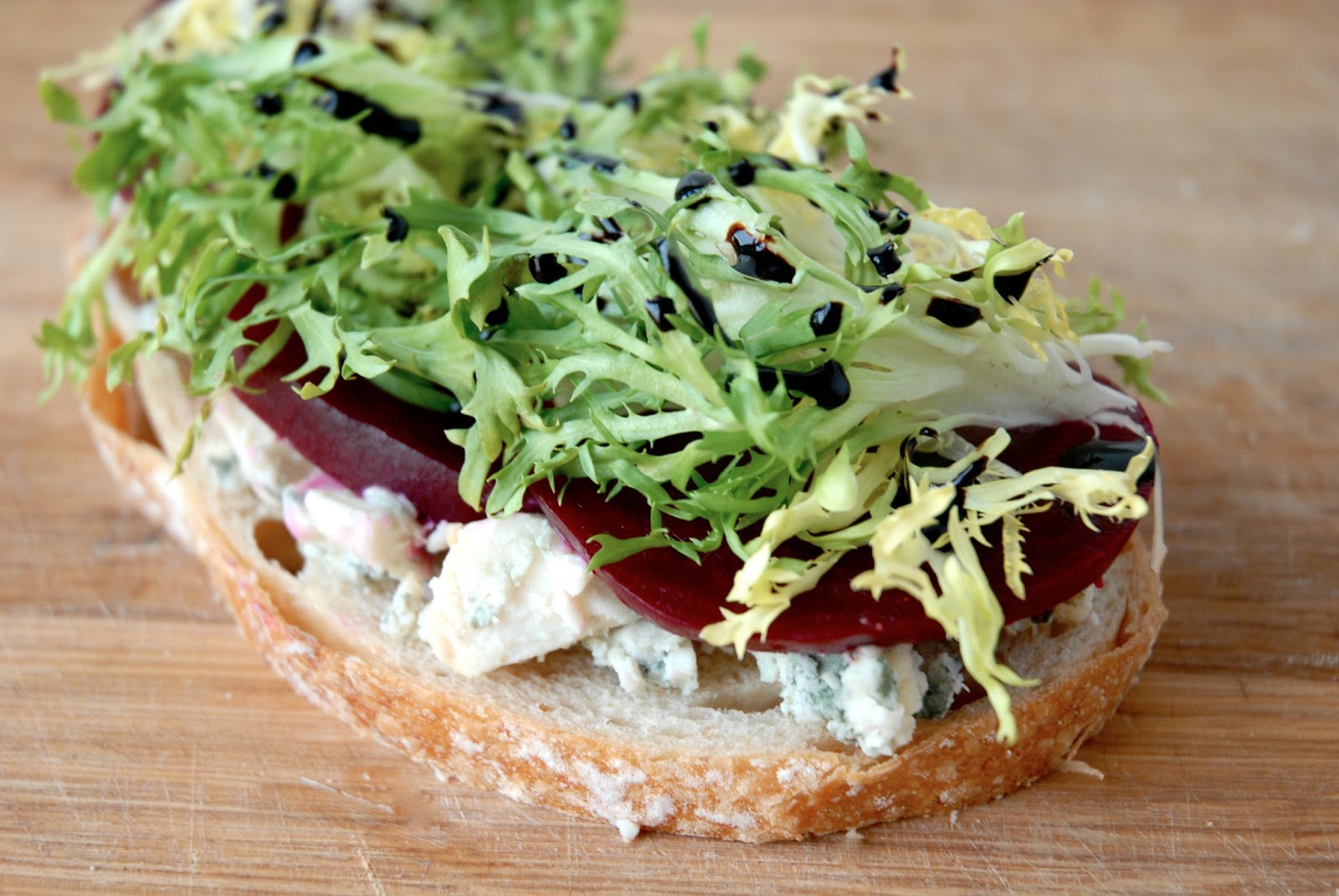 Now it's time for those yellow beets! Add them on and think about how rad nature is for making these crazy things. 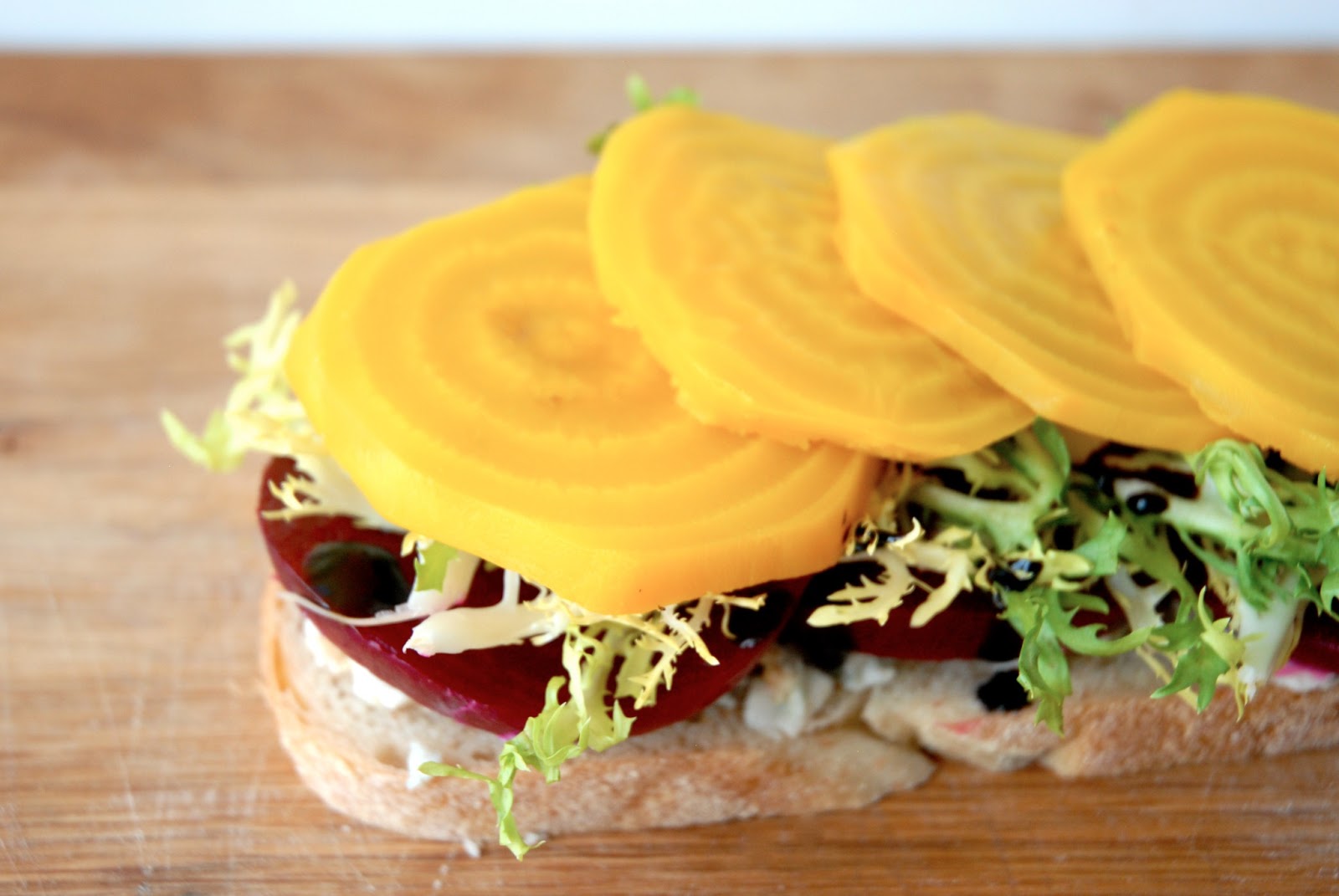 Top those beets with some more of that goats blue and clap your hands in excitement. Call you mom, too. I think she'd be excited to know you're not just lying around again. 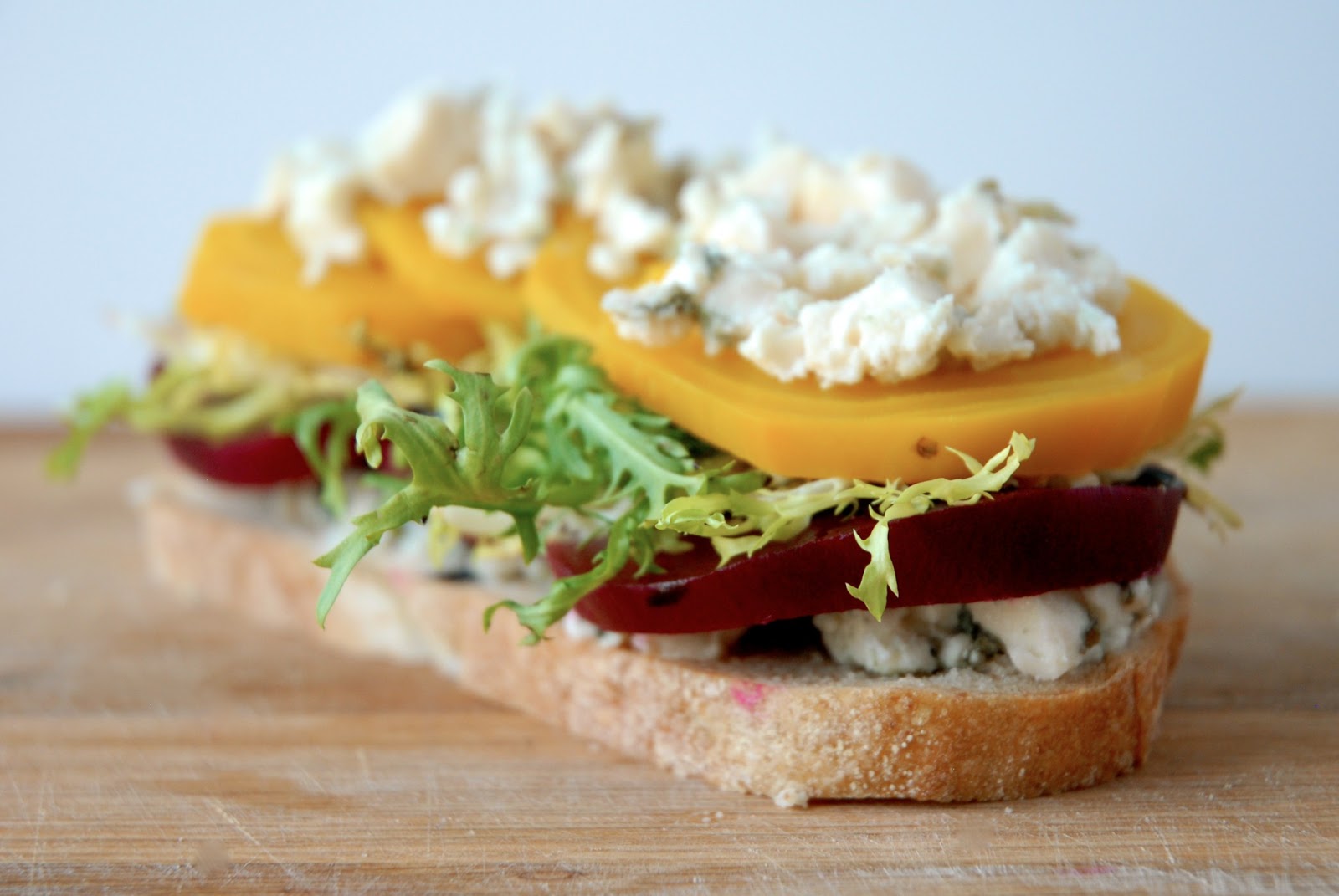 Add that top piece of bread and start salivating. 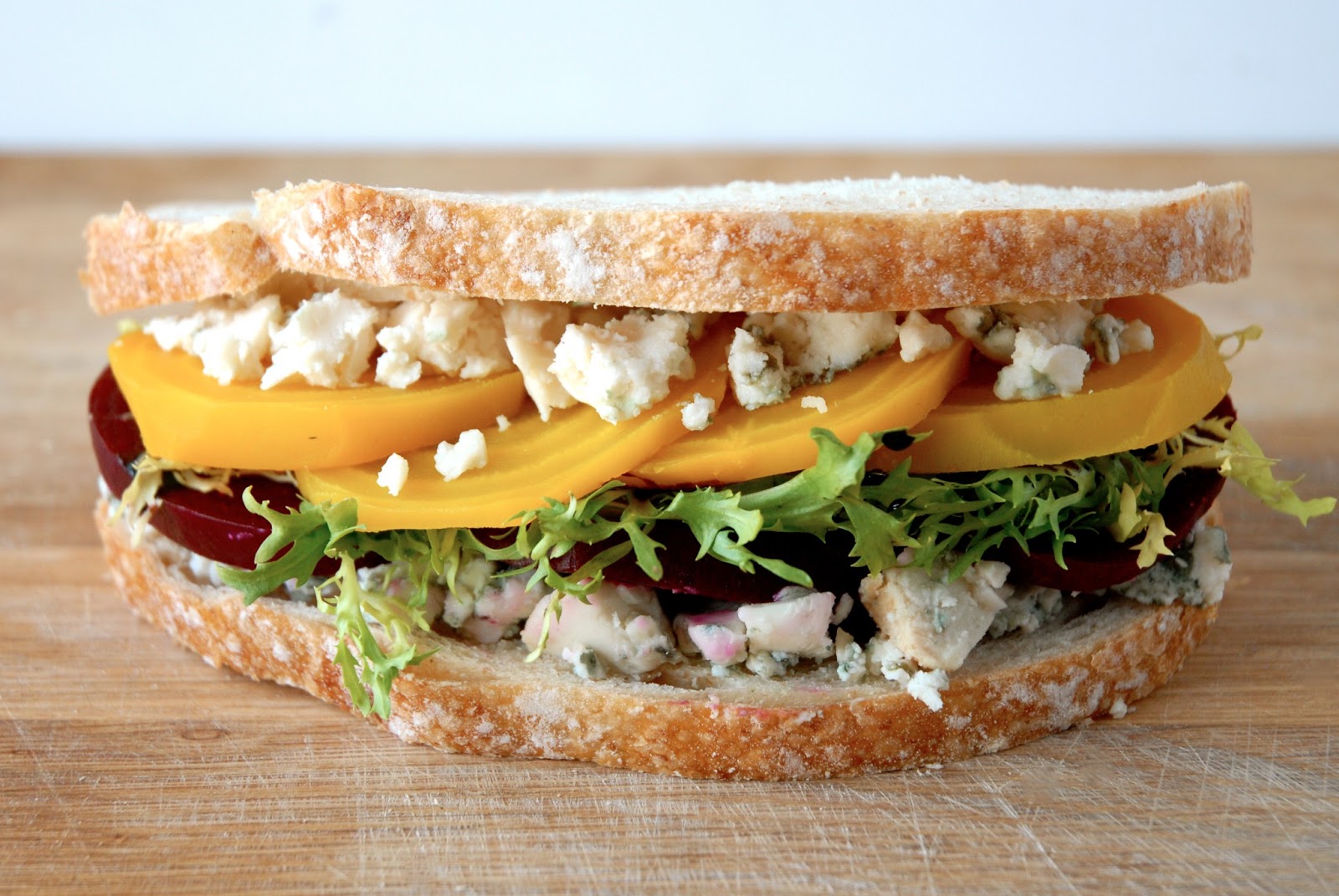 Turn your burner to medium, butter both sides of the sandwich, and place your sandwich in your griddle. 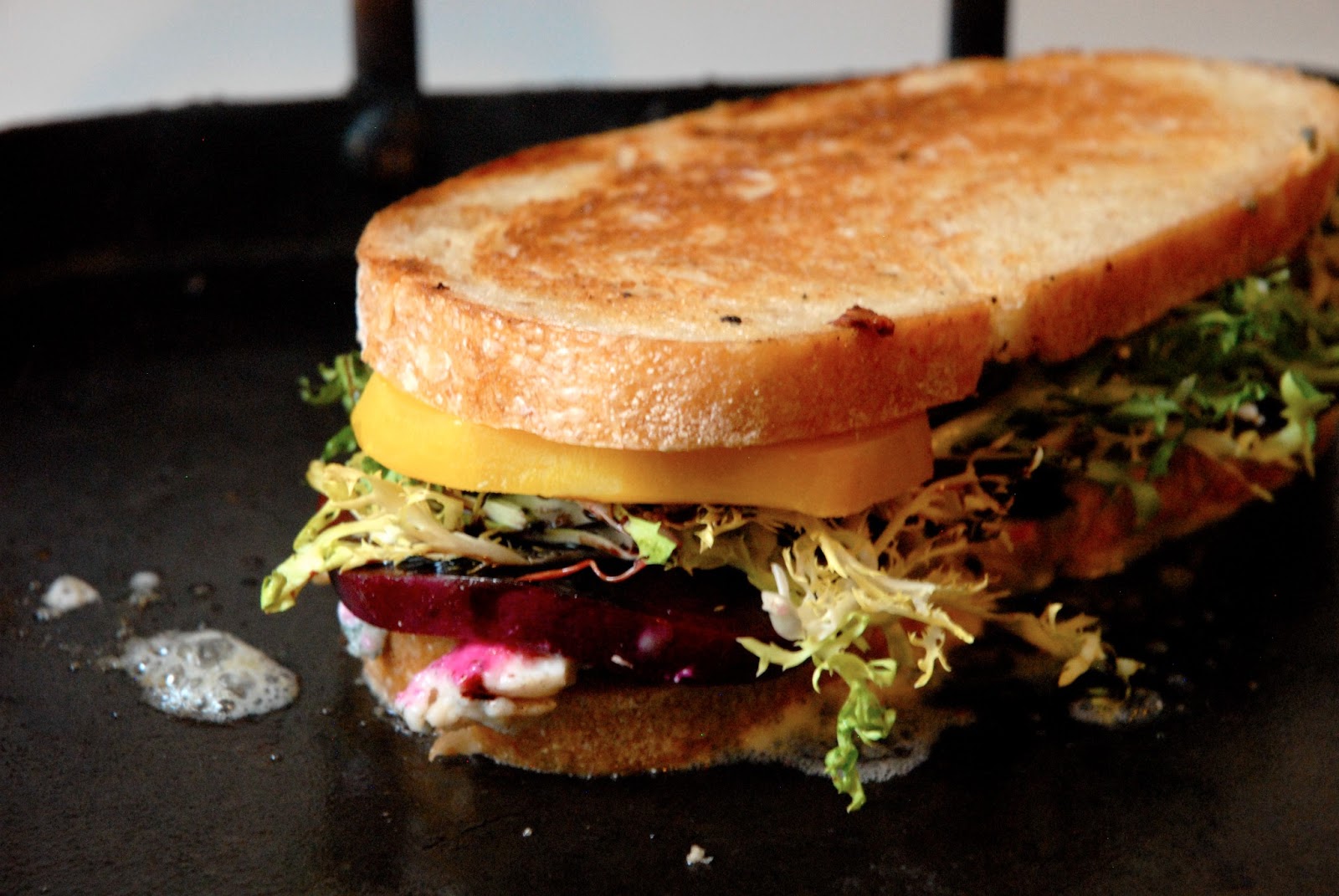 Let the sandwich cook until it's all golden and brown and the cheese starts to melt. At this point, take it off the burner and let it sit for a second before you cut in. Remember, this is always a good idea. It lets the flavors meld and the cheese won't ooze out of the sandwich so you don't have to lick your cutting board again. 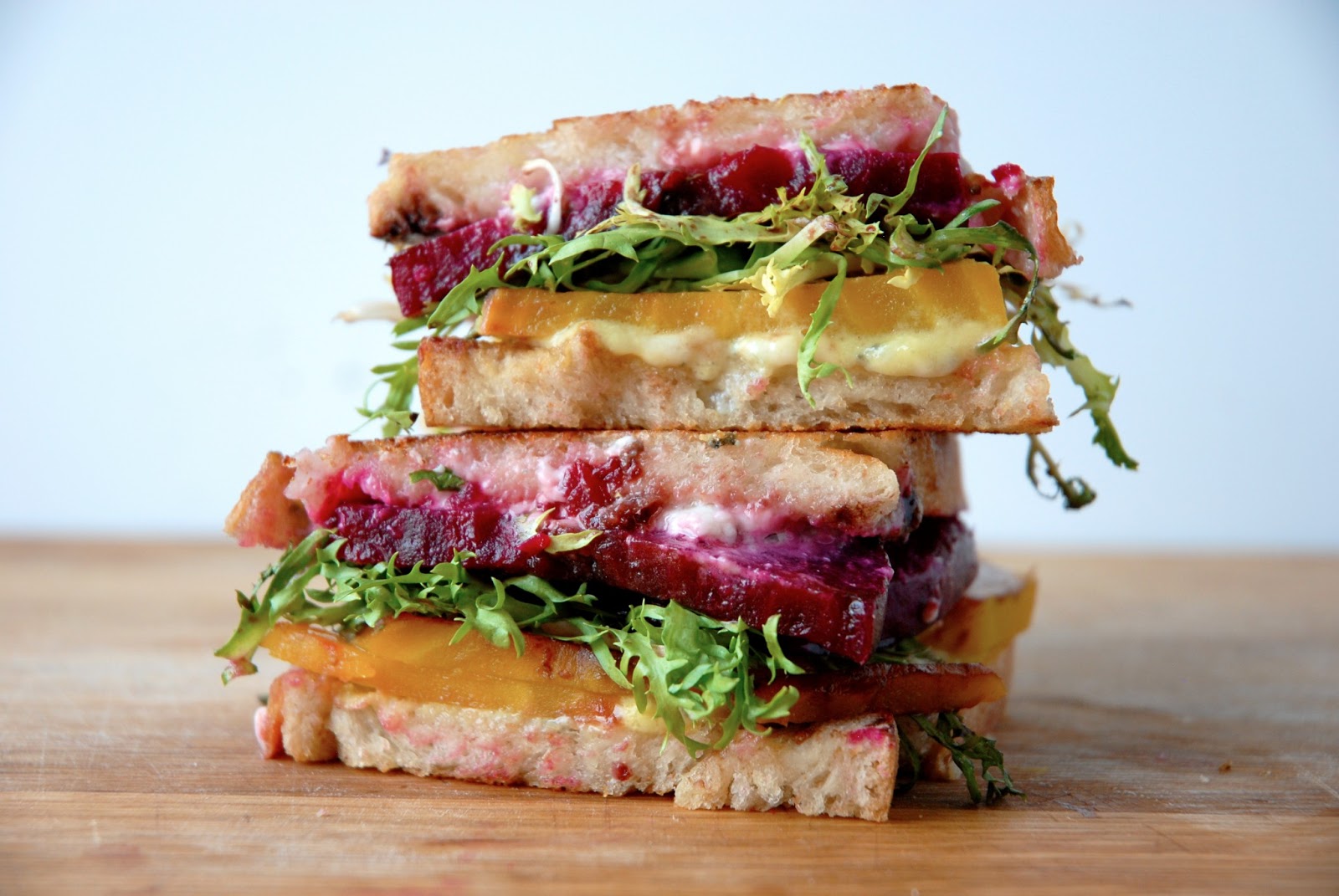 So I guess losing that blog post wasn't the end of the world and that three minute crying fest/mental breakdown was completely unnessary. I'm just impressed that I remembered most of what I was writing about.... I think? Anyways, until next time my babies.... Have a great 4th of July and remember that jell-o shots are the perfect treat to bring to any patriotic party.