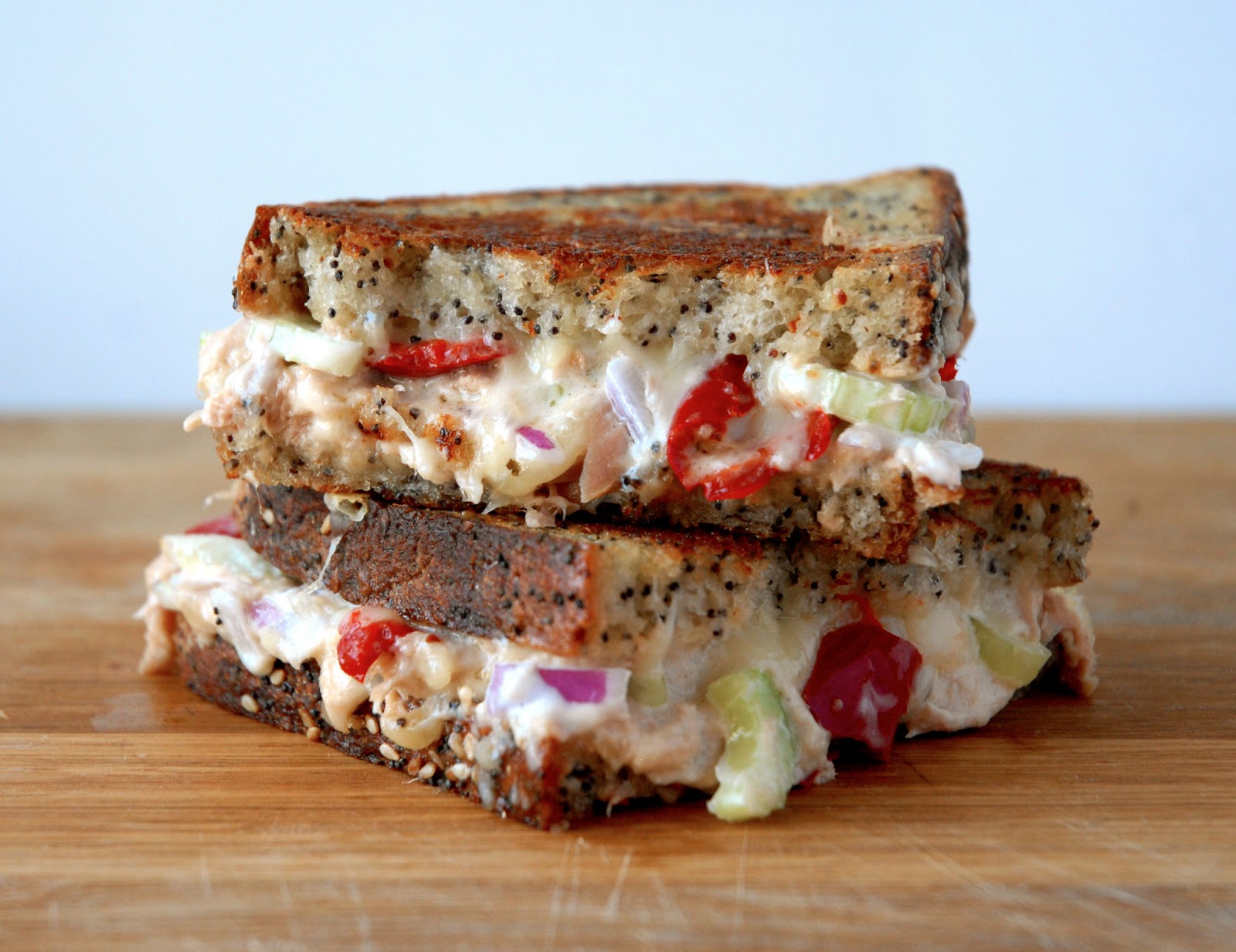 When you're a mid-twenties creative-being trying to do your own thang while living broker than a joke in the city, it's safe to say that you're going to have some major ups and downs thrown at you - sometimes in the form of a steaming bag of poop and sometimes on the shiniest silver platter you've ever seen. And even though the effects of these highs and lows might sting more than a cheap glass of white zinfandel to the face, they can also lead to some sweet treats.

What the hell am I talking about? Did someone slap the pessimist out of me? Not that I can remember...  I think it has something to do with a super-sweet email that I got from a GCS reader the other day. Like me and every other 20-something I know, she's been going through a rough spot - crappy boys, unemployment, lost favorite sweater, ya know, the type of problems that don't necessarily make you want to jump in front of a bus, but still drag ya down. When she opened up and shared, it made me realize that even though the original purpose of starting my blog was to share grilled cheese recipes, the best and most rewarding part has been interacting and relating to you guys.
By inadvertently bitching writing about my own drama, reading your responses has made me realize that I'm not alone in this world. Ridiculously lame things happen to everyone, and even though it's the pits, it's important to remember. Basically what I'm getting at is that life can suck sometimes but it can also be really fucking cool, super exciting and completely euphoric. I know it's not easy making the transition, but I wanted to share some of the ways that help me get pumped on life. It's not much, or that ground-breaking by any means, but here's what I got.
1. Dump the dummy that's been dragging you along for too long - you don't need him. He sucks and your friends don't like him anyways. To make this easier, you'll need another man to get excited about. If you don't have anyone lined up, make some eyes at the bar tonight. Seriously, it's surprising how well and easy this method works. Just don't stare too long or lip your lips or wink or anything creepy like that.
2. Bliss-out your summer playlist - Refresh your tunes to make your summer feel new. Add some super blissed out electronic music that's guaranteed to make you bop around like that first time you heard Spice Girls. You'll also want some serious girl power swag like bikini kill or le tigre. I just got myself a soundcloud account so if you'd like, you can follow me as I blast my stream with the most hyper-happy tracks I can find.
3. Host a homegirls night - It may be hard when all your friends are all wified up, but do it. Grab some wine, make some cookies, have some cheese out. Play clueless while you pump some 90s jock jams. Reminisce, talk trash, and make it awesome.
4. Update that wardrobe, girlfriend - Winter's over and you may be broke, but hanging out in those ratty black leggings and old sweatshirts isn't doing anything for your mindset. There's no better way to make the transition than by spending an afternoon at the thrift store and finding the perfect cutoffs that make your booty look like Beyonce's. Or at least sort of like Beyonce's. We can always dream big, right?
5. Soak it up - The rays, the weather, the positive vibes that are leaking out of everyone's brains as they enjoy the beautiful weather outside. Take a minute to think about how funny your friends are. High five a stranger, Pet a dog, smoke some  Lay on the grass and breathe. Ride the chill wave as long as possible
As for this sandwich, well let's just think of it as the Girl-Power // Clueless version of grilled cheese. Tai is the tuna salad that gets a makeover from Cher and Dionne, who are represented by the sweet, buttery, and nutty gruyere and swiss combo. The everything bread is Josh, Travis, and Murray, you know all the good guys from the movie. The cherry peppers are Christian, for a little pop of unexpected flavor and the butter is ummmmmm.....you.

Live the dream with these: 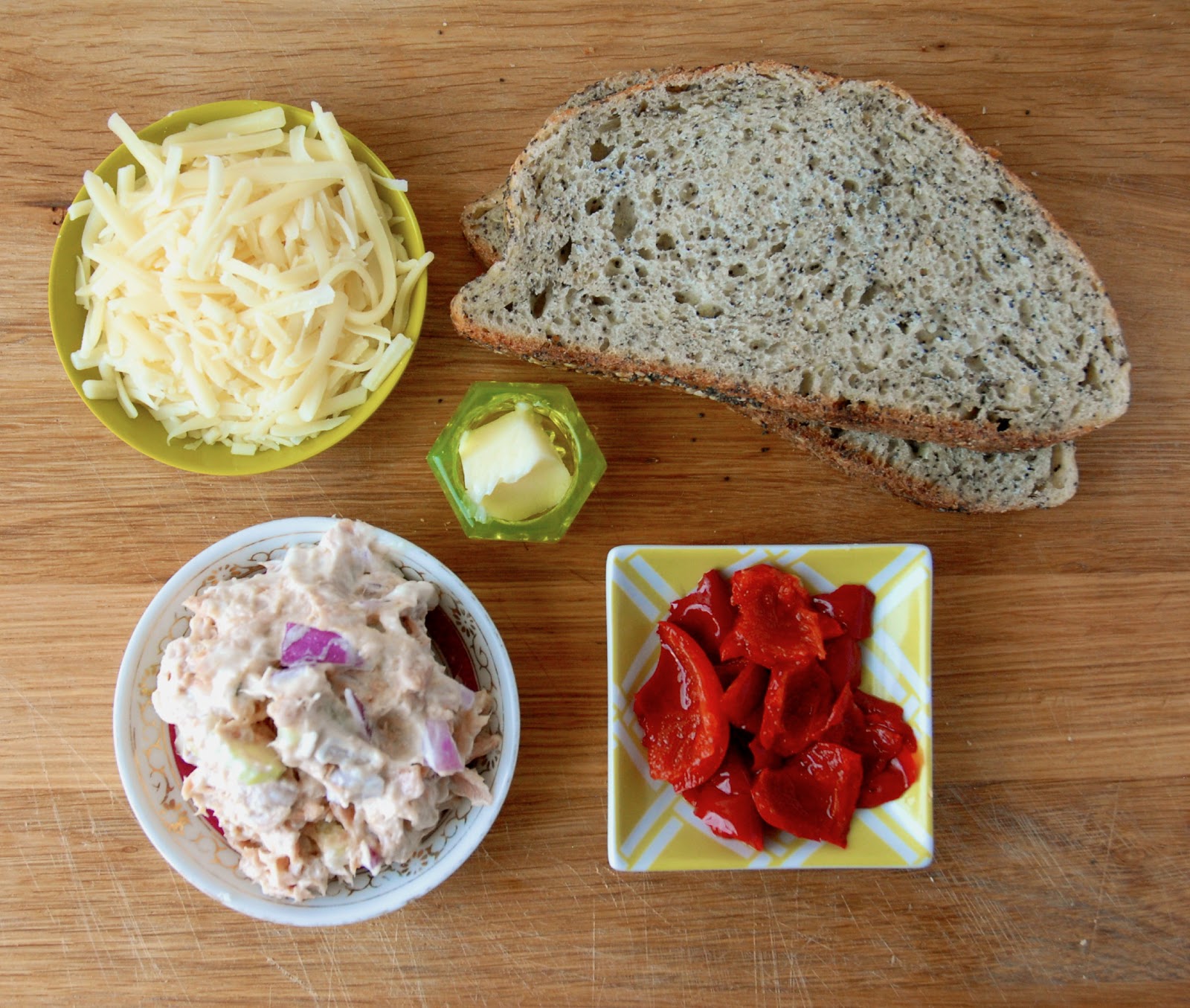 Give a little kiss to your gruyere and swiss before you pile half of it onto one slice of bread.
It's such a great combo; nutty, slightly sweet, and oh so buttery. The best part about combining these two lactaid lovers is that they melt perfectly to create the ultimate union of melted cheesiness. LIke I said before, this combo is like the Cher and Di of Beverly Hills. 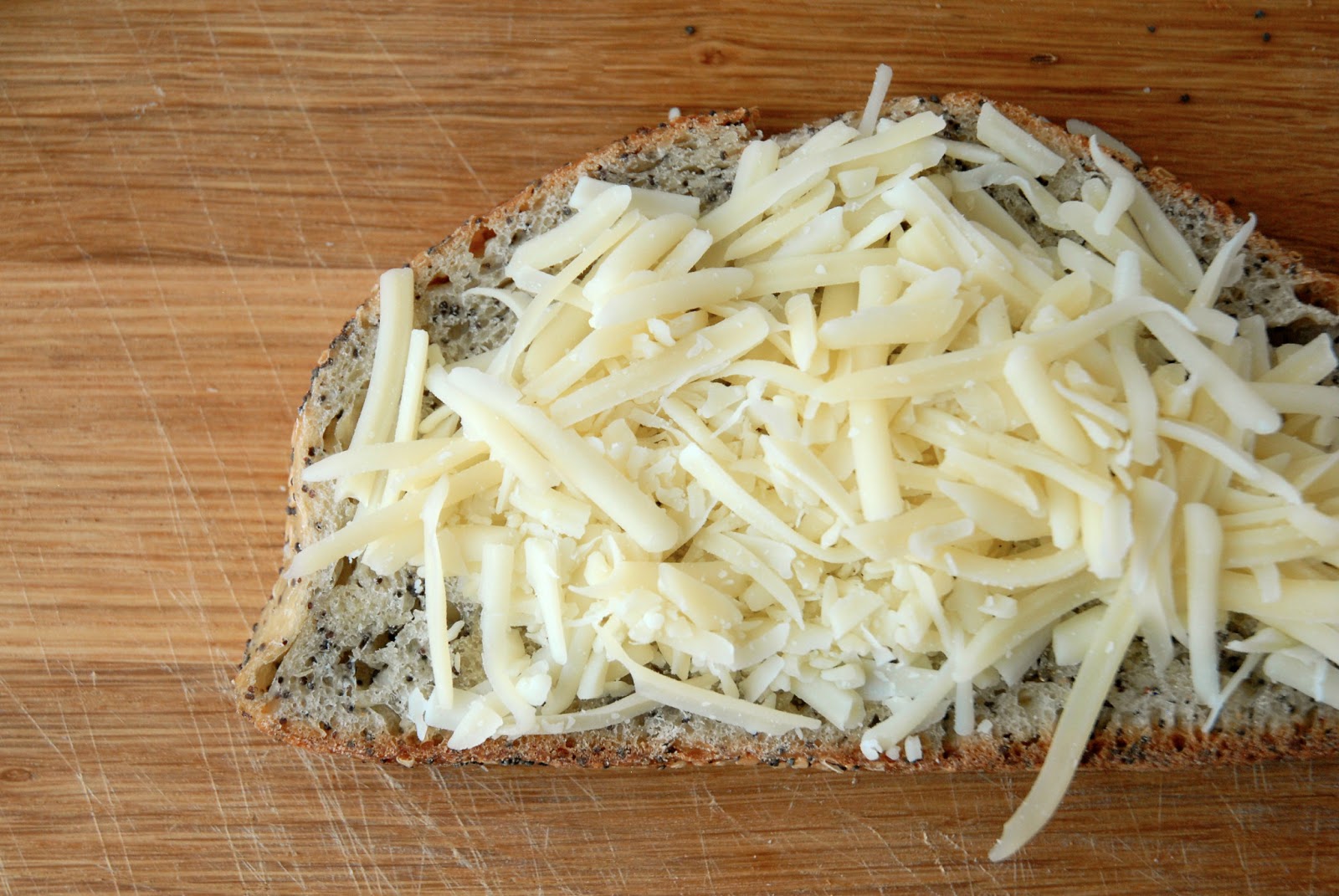 Now it's tuna salad time. Like Tai, tuna salad doesn't look so great on the outside. It actually looks totally disgusting, but it's full of delicious flavors and fun. Wait, can tuna salad be fun? Totally.
Anyways, scoop on your tuna salad and make it so that it's evenly distributed.

Now to make things a little more exciting, add some cherry peppers. These are sweet, spicy, and they really pop against the tuna salad. It sort of wakes you up, just like Christian did to Cher when she realized that not all guys are immature assholes. Sure he was totally gay, but if she didn't have him she would have never fallen in love with Josh and we would have all cried and thought the movie sucked. 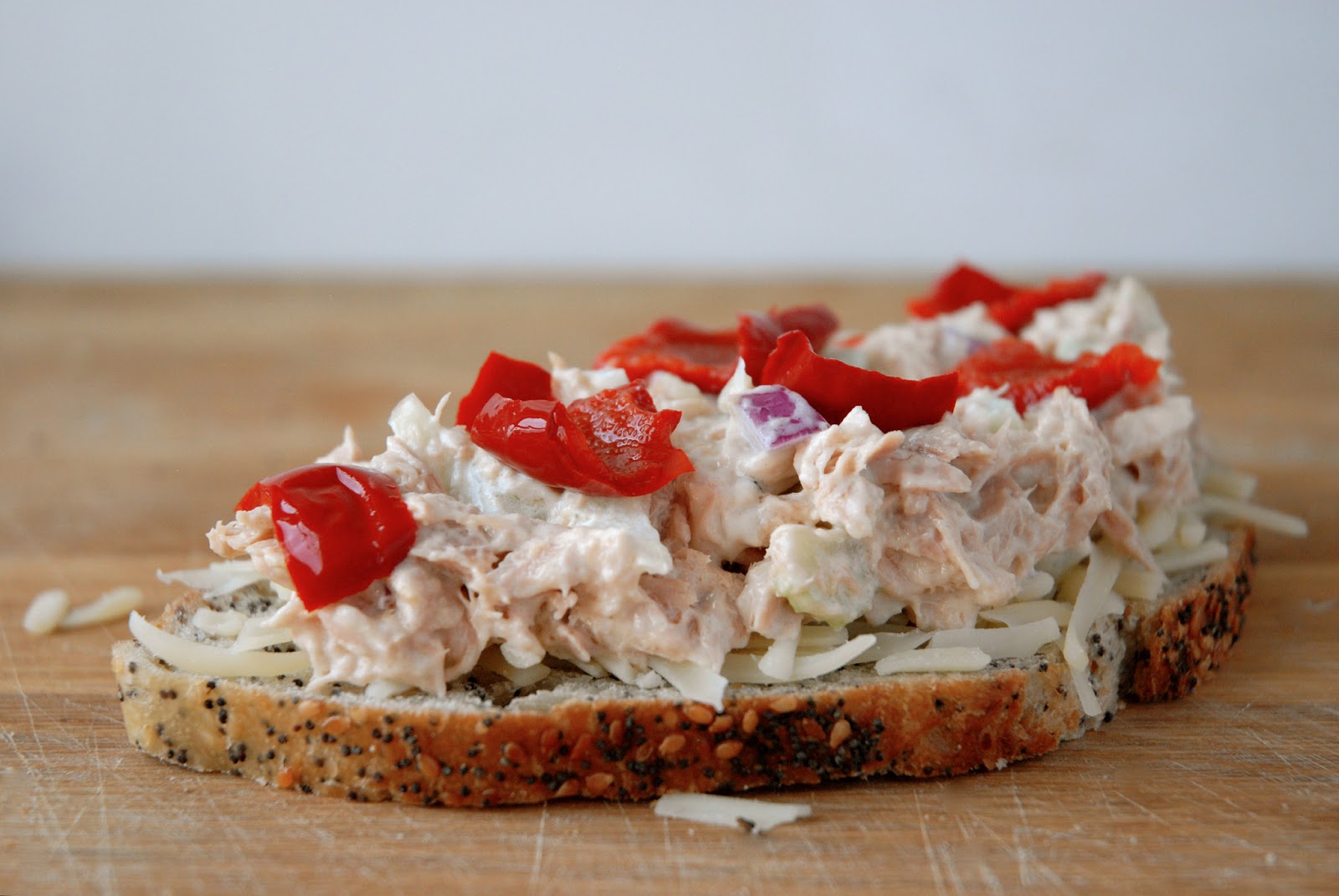 Now get your life together and add the rest of the cheese and the top piece of bread. You're almost there! Self-improvement - grilled cheese style! 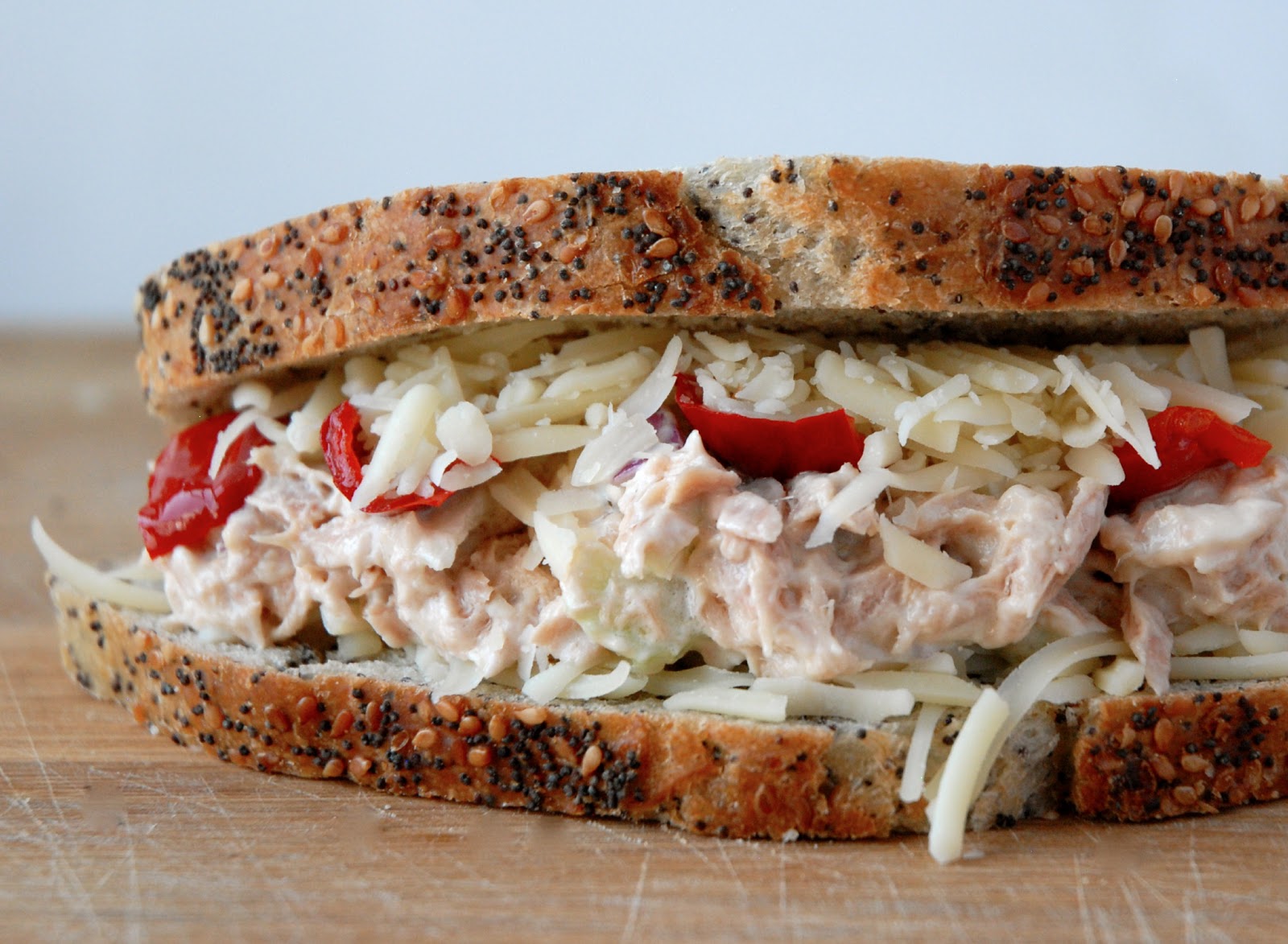 Butter your bread and heat your burner to medium. Place your creation in the middle and watch it evolve into a beautiful toasty grilled cheese! See any metaphors here? 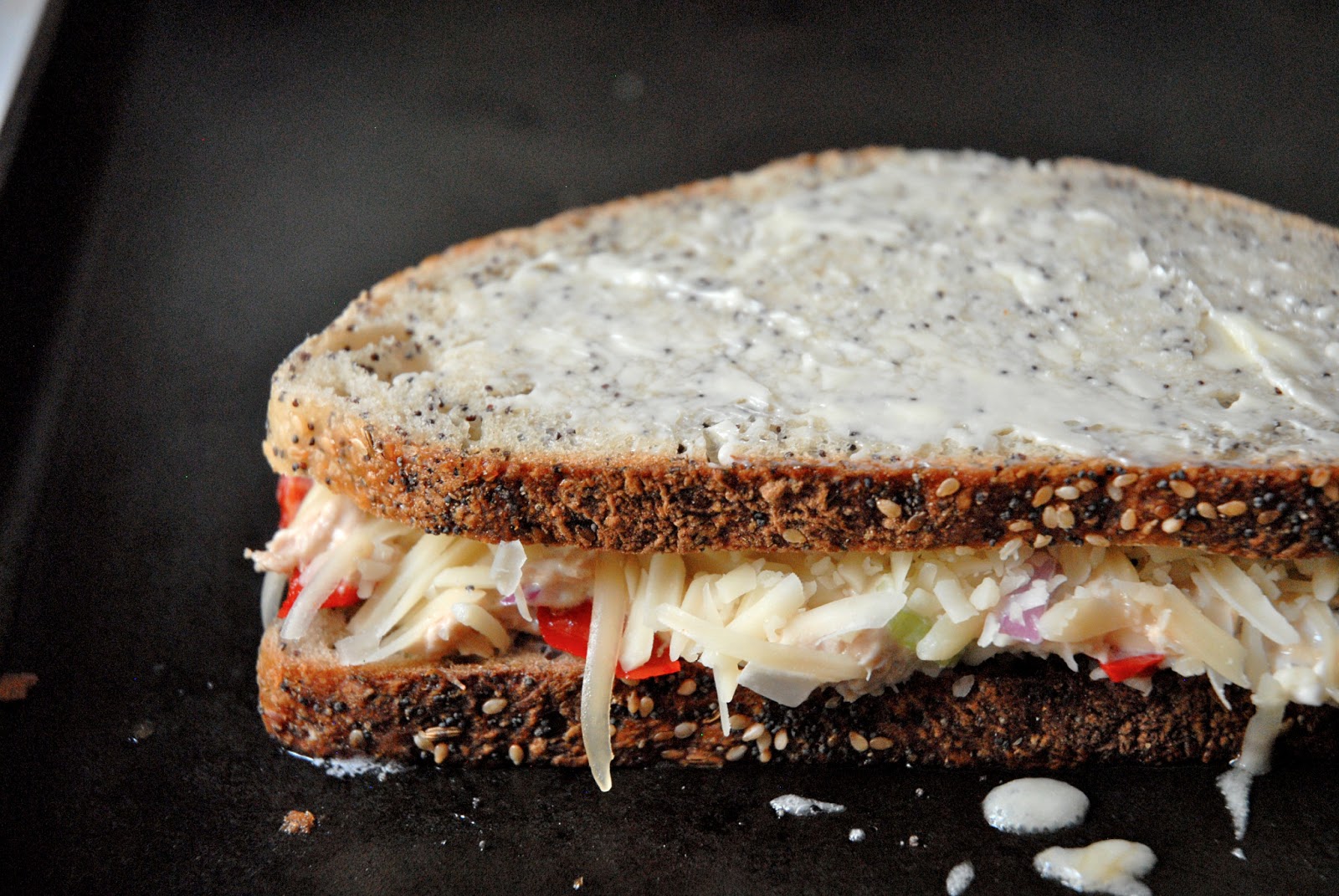 Once it finishes cooking, take it off the burner and let it sit for a minute. Slice it down the middle, examine it for it's awesomeness, take it all in and get pumped that you get to eat this crazy thing.

I know this post might've sounded a little too cosmo'd out and self-helpy, especially coming from me, but seriously, it's time to get hyped up about life. Force yourself to make moves that'll make you excited. The results are too cool not to.
xoxo,
GCS
Share
Pin
« The Happy Camper - Kraft Singles, Bacon and White Bread Camping Grilled Cheese
The KimCheeze Kick - Cheddar, Cream Cheese, Kimchee, and Pineapple Grilled Cheese »