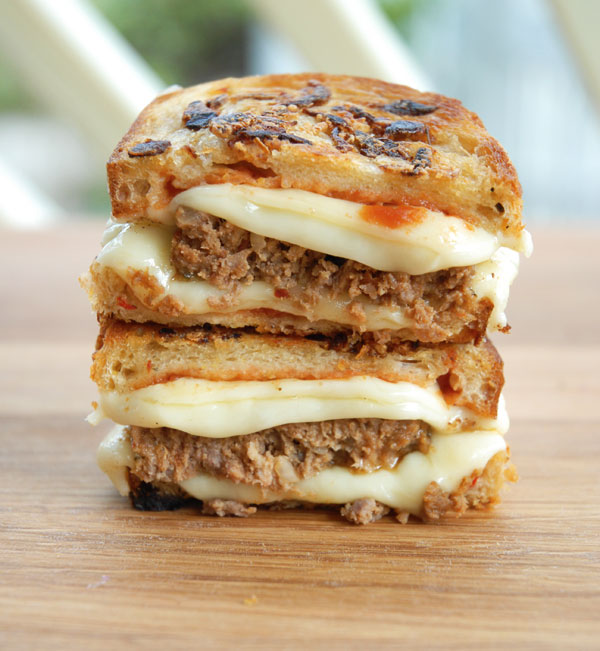 It’s been once month since I got back from Morocco. Bones have mended, painkillers have been downed, and life back in Brooklyn has settled. Two surgeries later, I’m back to typing – almost using both hands again – and trying to get the accounts of my culinary adventures ready for a feature on Saveur.com. And although I signed a contract to ensure that I only share my foodie stories with the mag, I’ll gladly fill you in on another horrifying interesting part of my adventure abroad.

10 days in Morocco and not one picture of a camel. Who leaves the desert without the obligatory camel shot? “Not this girl” I told myself as I was petting the sweet little fuzzy humps of a baby camel that was actually the size of a full grown horse. So with a handful of local flora, i lifted my head and gave an oversized smile to take what I thought was going to be a cute shot of me feeding the giant beast baby. It wasn’t so sweet though. Before I knew it, I saw the baby camels head rear toward mine and as an attempt to escape getting my face/ponytail ripped off, I ducked down and ended up falling on my ass. As I was taking in what had happened from the ground, covered in camel poop no less, I realized that they tie the camels up by their feet and that I had tripped on its leash. Stupid me! What I didn’t notice, until a few seconds later, was that my hand was hanging off my wrist. No bones, blood, or gore, but literally my hand had been dislocated and was hanging off my wrist.

The pain set in. I blacked out.

Before I knew it I was in a Moroccan hospital getting x-rayed and was told in French, Arabic, and whatever other language that they thought I might speak, that I had broke my fucking wrist.  Needless to say, I was super freaked out. And I don’t know if anyone’s ever gotten seriously hurt when they were traveling alone in a foreign country but it is not fun. Not at all. The hospital, although clean and orderly, seemed to be the scariest place on earth like the perfect location for a horror film. If my tour guide wasn’t the best guy in the whole world, (am i obsessed with him? maybe a little) I don’t know if i would have made it. I seriously thought I was going to die – no exaggeration.

As it turned out, I shattered my wrist and had to get an emergency surgery. Luckily this all happened on my very last day in Marrakech so my trip wasn’t ruined but my hand was… and still sort of is. After I got back to the States, I found out that I needed to get another surgery to fix the pins that I had gotten in Morocco. Even though a broken wrist doesn’t really seem like a big deal in the scheme of things, breaking your wrist when all you do is use your hands to work, is a big long nightmare. My last month has sucked and I’ve spent way too much time at home, doing absolutely nothing except lying around and eating the food that my friends make me. A week ago I got my second surgery, everything went well and now that I’m slightly back on my feet, I’m returning the favor with a super comforting GC to help these last snowy days of winter not seem so dismal.  Here it is with Wisconsin horseradish cheddar, my mom’s leftover meatloaf, ketchup, fried onions, and jalapeno bread.

Ya need this stuff: 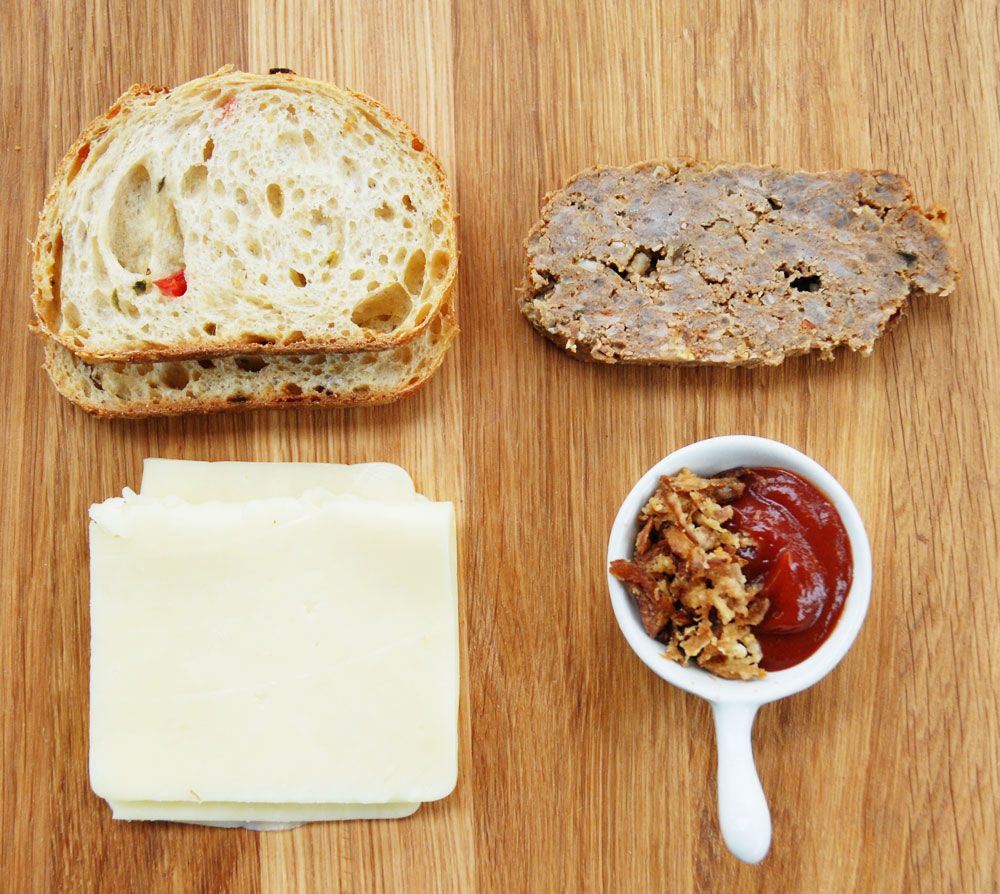 To begin, smear some ketchup onto both slices of bread and lay two layers of the horseradish cheddar on top. 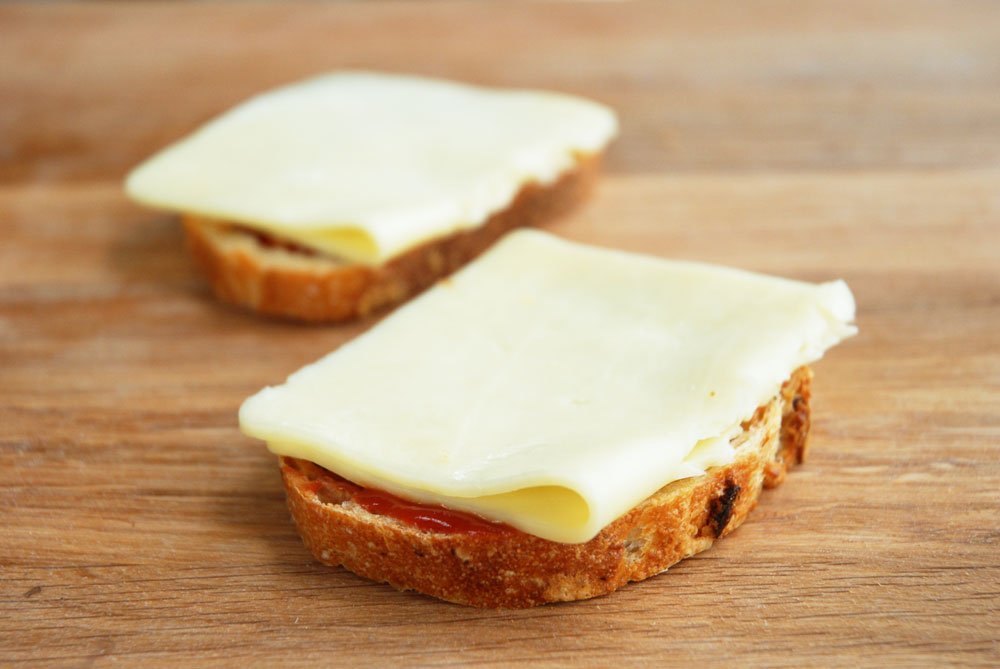 Then add a big ole fat slice of leftover meatloaf on top. As I mentioned in the ingredients section, I used my mom’s recipe which is super similar to Paula Deen’s but you could totally use whatever recipe you’re familiar with. And if you’ve never made meatloaf before and think it’s weird… YOU NEED TO TRY IT! I thought it was always kind of gross but I just tried it for the first time in years and it is so freaking good. Oh! and if you’re veg, you could totally substitute some sort of veggie patty in there. I think it would still be awesome. 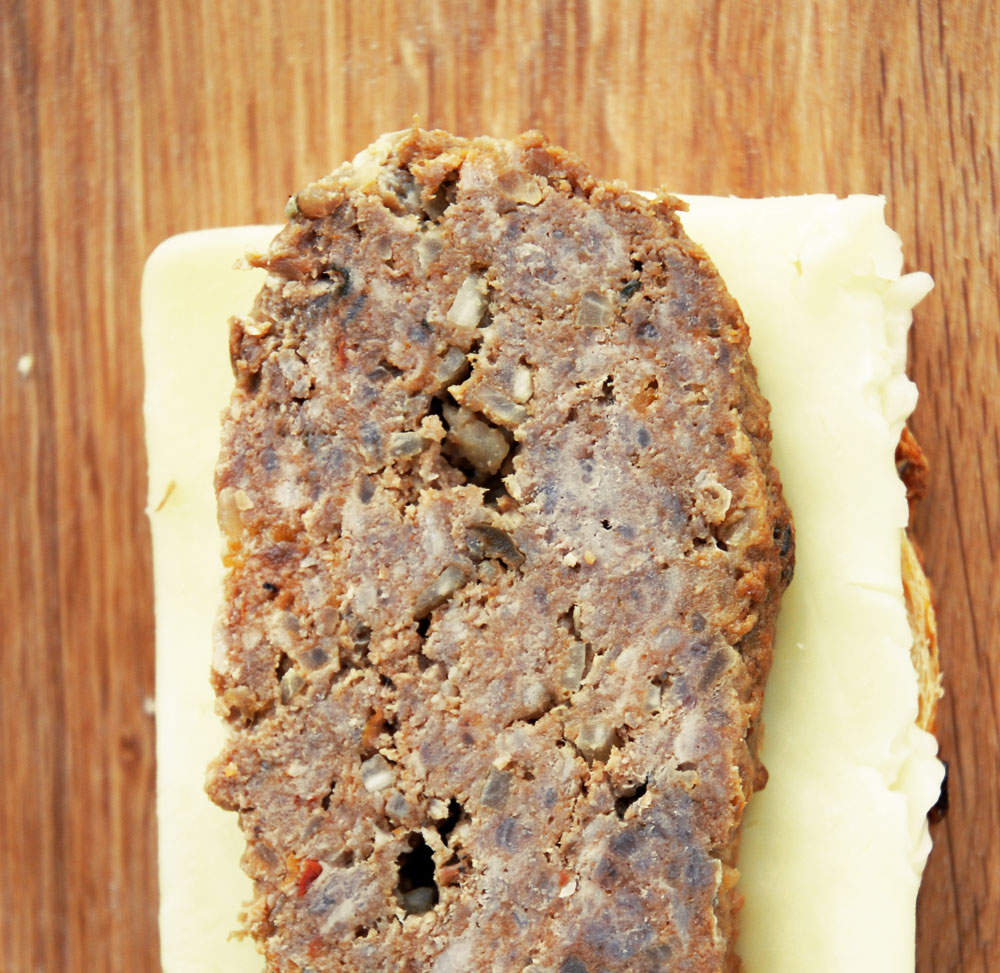 Now add the other slice of bread on top and give it a generous smear of salted butter. Sprinkle on half of the fried onions and set in a pan over medium low heat. Because you don’t want the onions to burn, make sure cook this grilled cheese on low and slow. It might take some time to get it all crispy and melty, but it’ll be worth it. Patience, which is something I lack, makes it worth it. 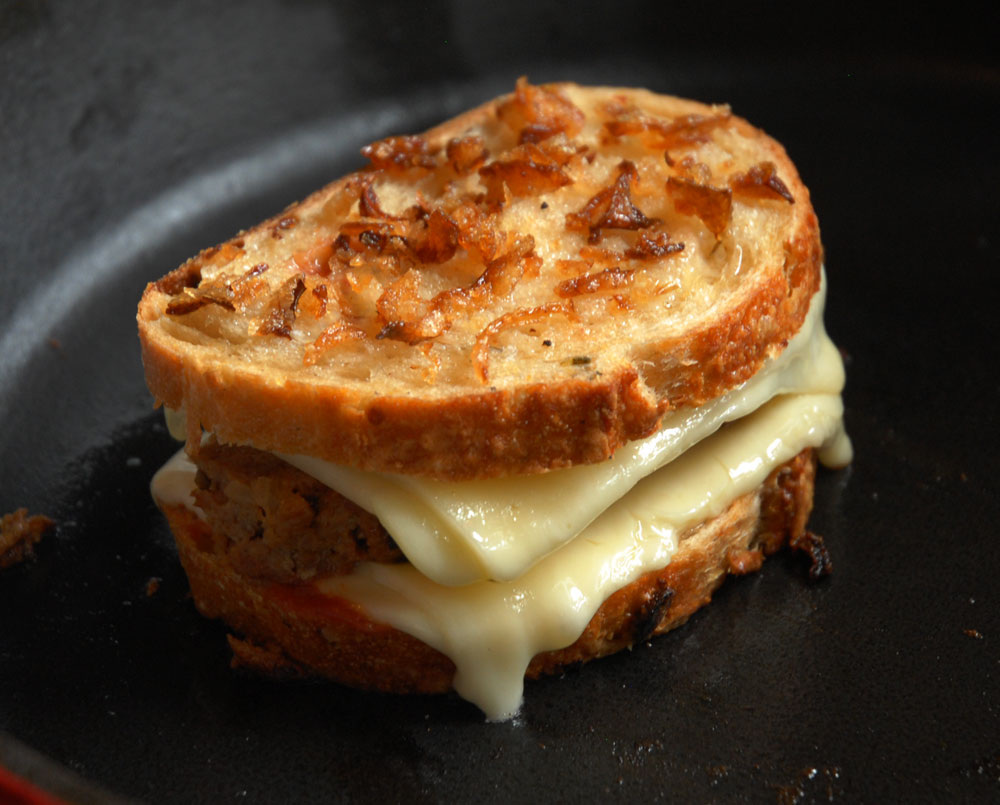 After it browns for a few minutes on each side, remove it from the heat and allow it to set and cool for a few minutes. Take this time to pour yourself a beer, find some salt and vinegar chips, and get comfy. Then eat!!

Oh! If you haven’t noticed, the name of this grilled cheese has absolutely nothing to do with my camel story but if you follow me on Facebook, Twitter, or Instagram, then you’ll know that I ran a contest to name this grilled delight. After an almost spot-on guess from Vintage Sugarcube, she won and picked the awesome and amazing name “Hangover Helper” – True to GCS form if I do say so myself.