My brother’s gone and I made it through Halloween without getting arrested. Thank God. He’s such a party boy and trying to keep up with him was absolutely exhausting. You know how when people come to visit, it sort of becomes your vacation too? Well yeah, I’m just going to go ahead and call this my fall spring break because I partied like I was still in college – not that I normally don’t. And since Halloween is my favorite holiday, and because I didn’t think (or have time) to do a Halloween post as awesome as last year’s, I’m making these savory cheesy pumpkin grilled cheese “dumplings” that are bathed in a sage brown butter sauce as the new exciting method for cooking up these awesome sandwiches. Get excited! 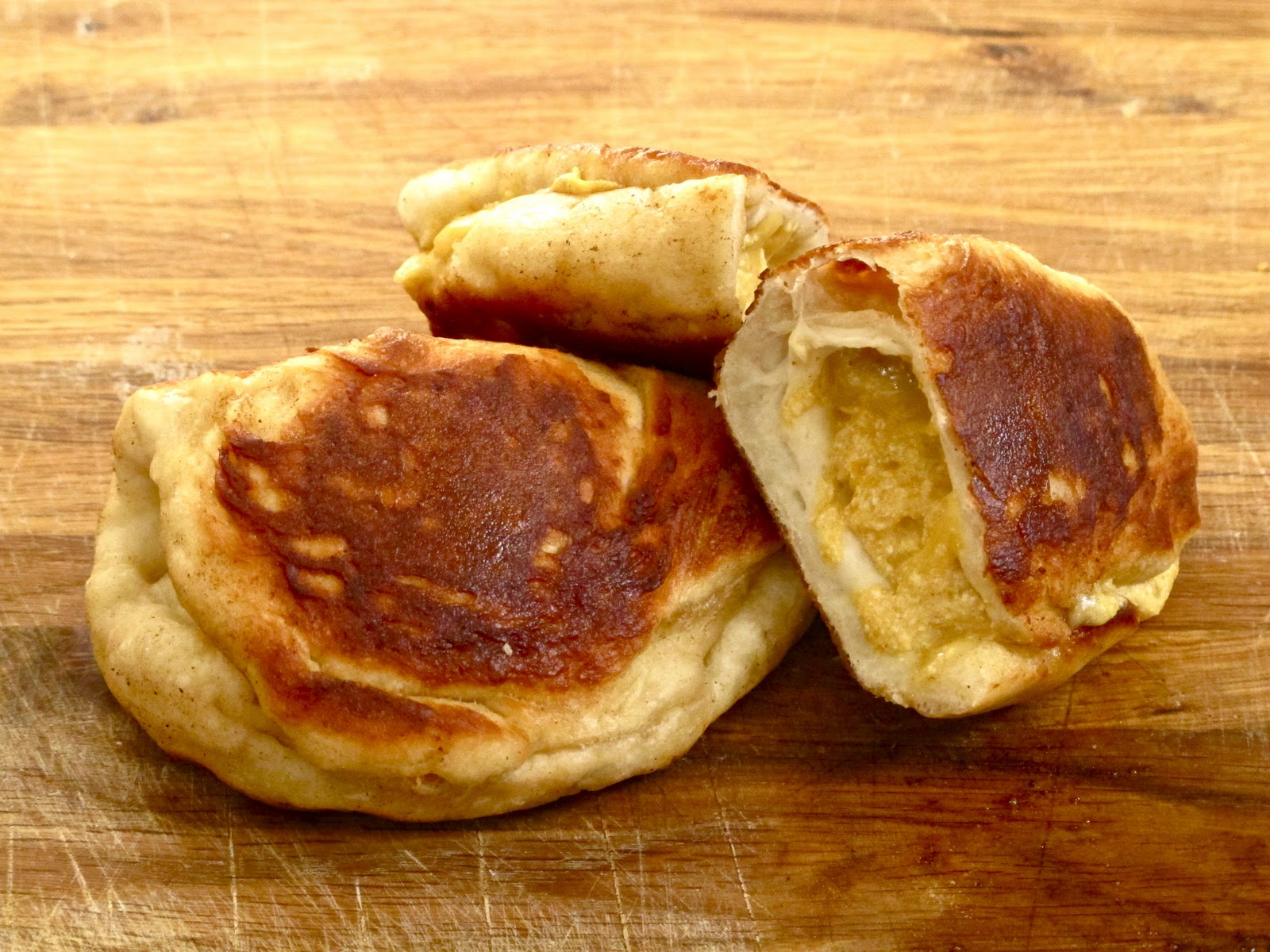 Here’s what you’ll need to get your spook on. 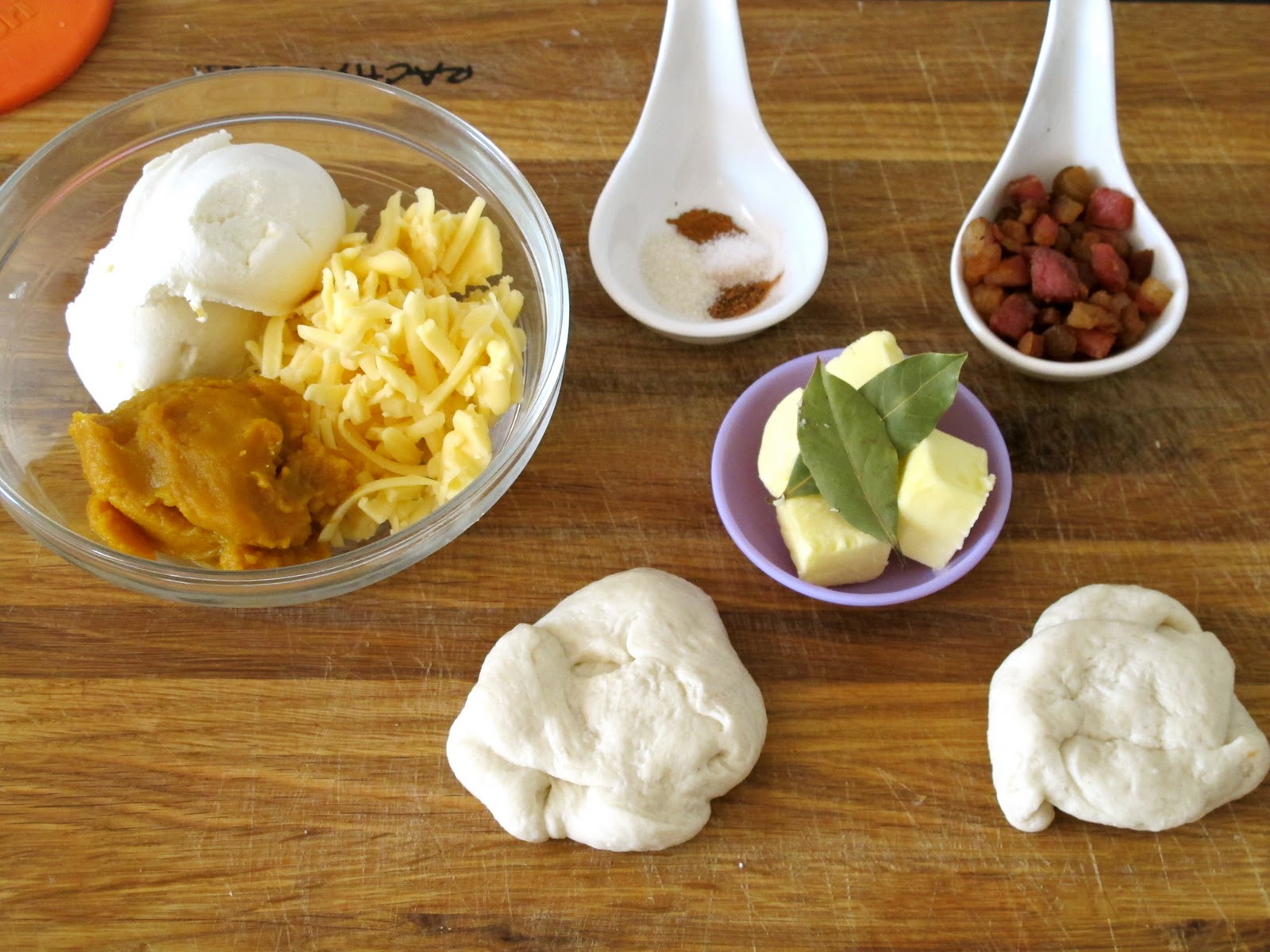 First we need to mix up our filling. I combined the ricotta, pumpkin puree, and grated gouda. 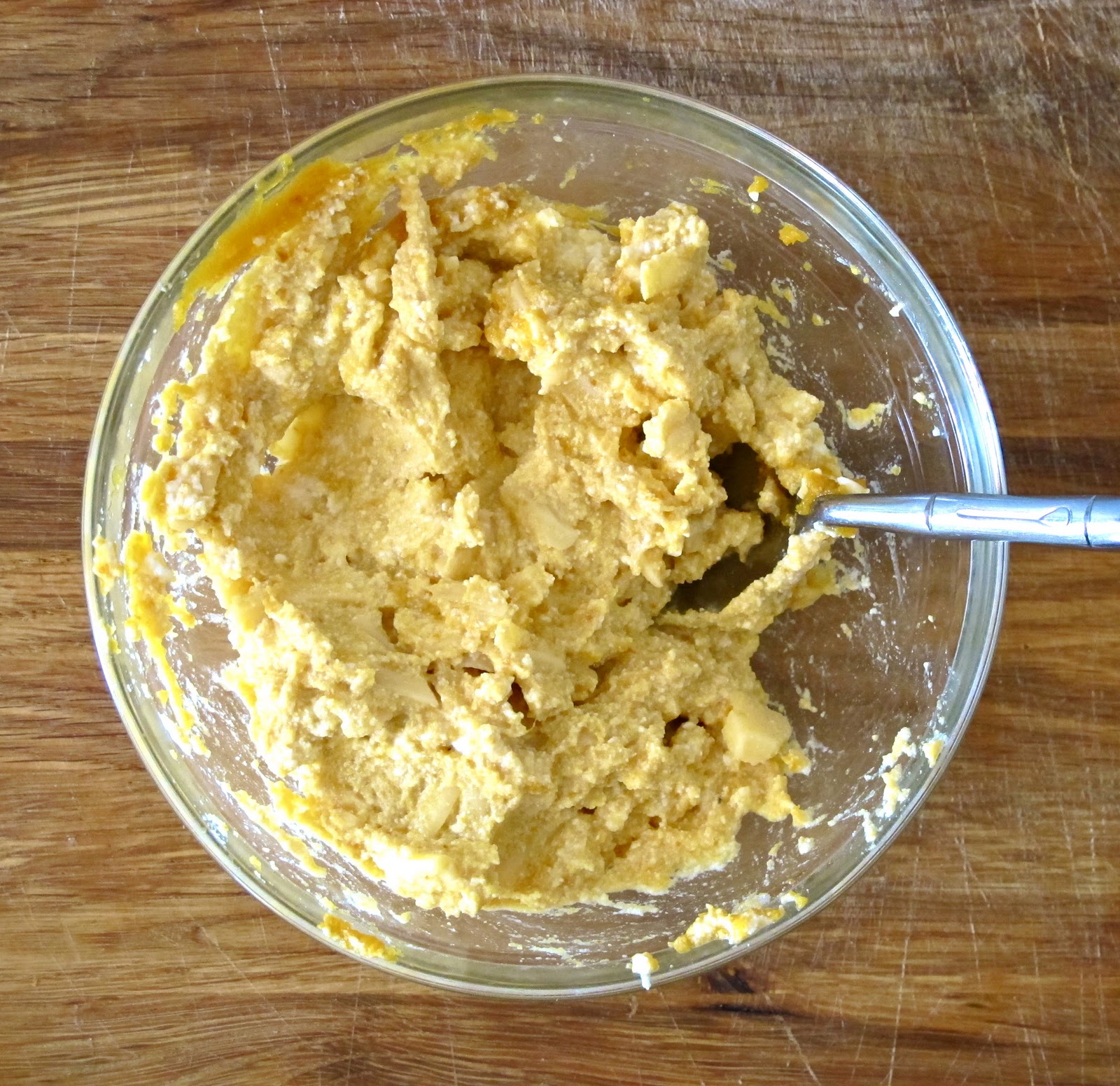 Then I mixed in the spices and the cooked bacon. If you haven’t had nueske’s bacon then you are seriously missing out. The New York Times calls it the beluga caviar of bacon and I completely agree. 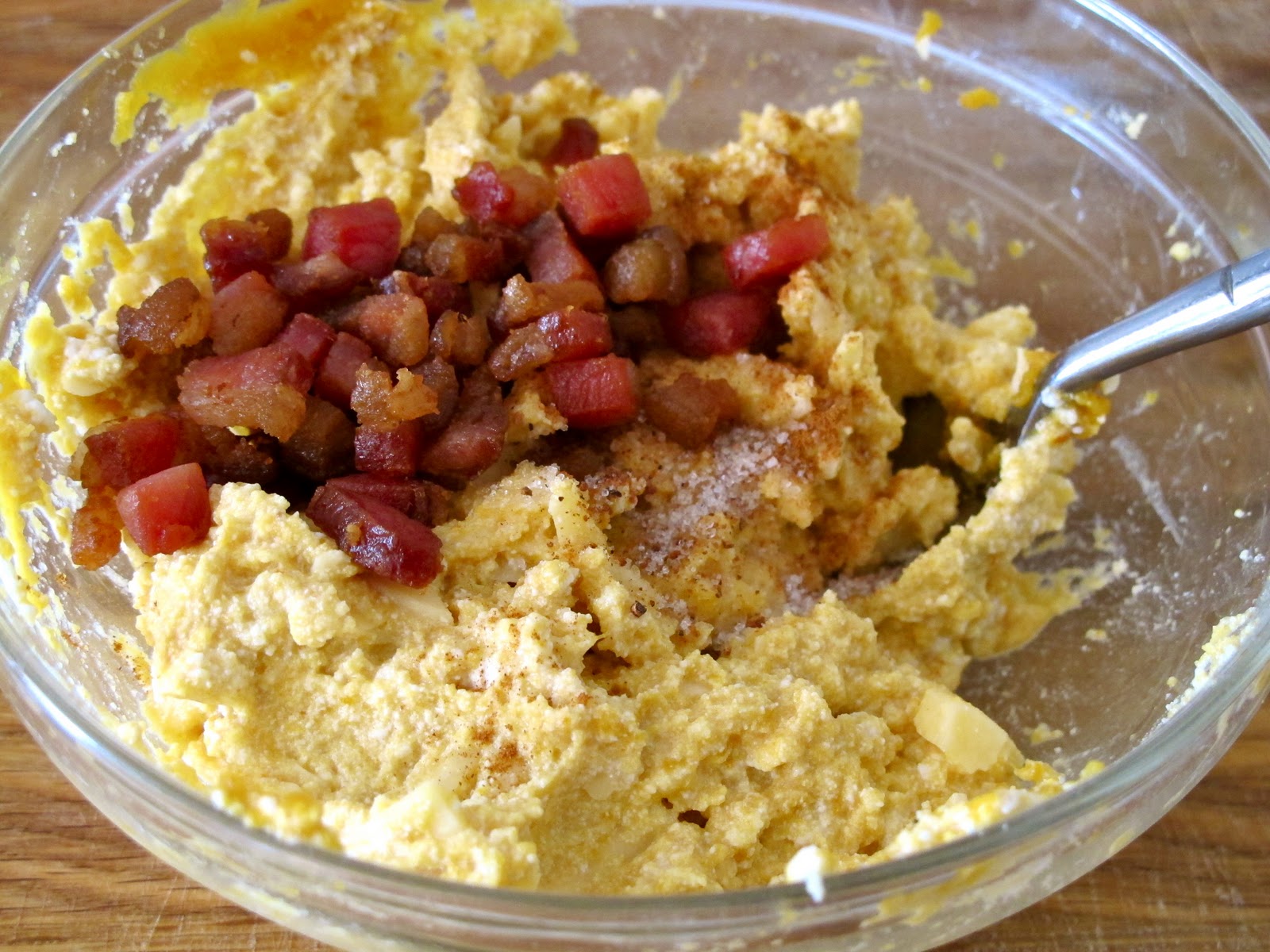 Once the mixture was ready, I started to stretch out the thawed dough. Be careful not to let it break because it will if you play with it too much. You’ll want to stretch it far enough so you can seal in the filling. 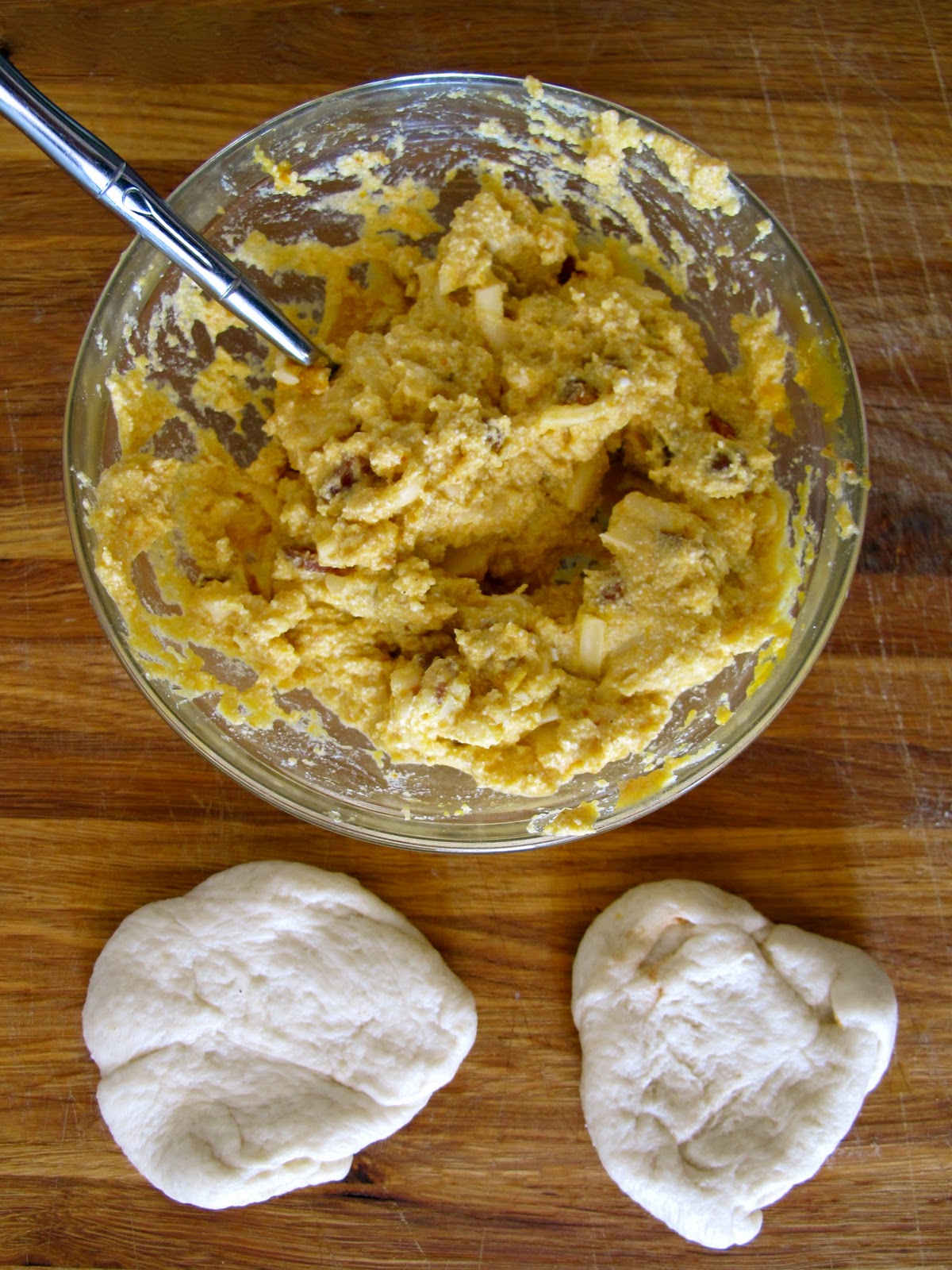 Then I plopped about 3/4 tbsp of the mixture in the dough.  If you think you can fit more, go for it! 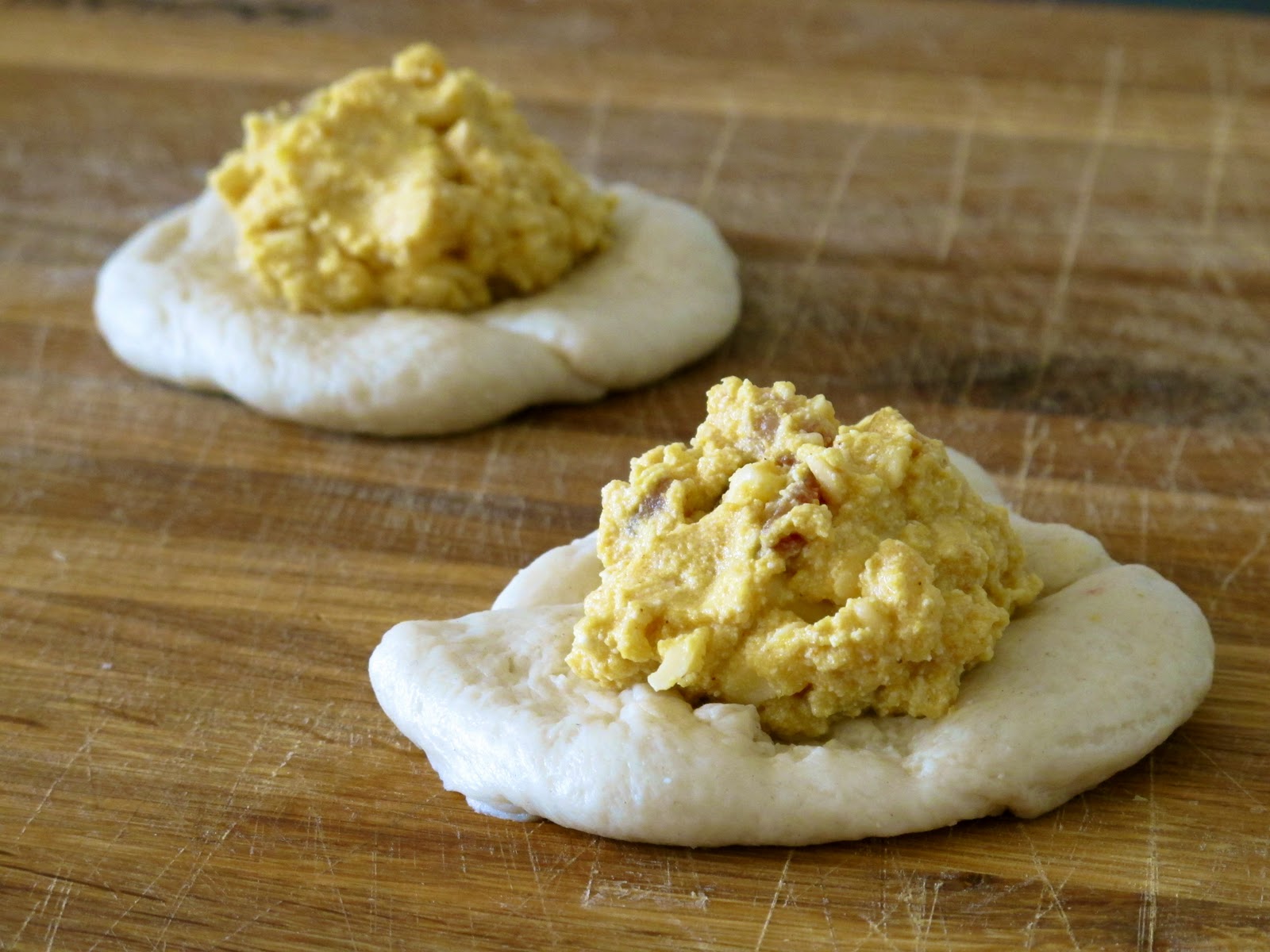 From there, I gently folded the dough over and sort of made a little hand pie. I basically just tucked in the the outside so the filling wouldn’t ooze out. You can also use the fork approach and go around the edge with the spiky part by gently pressing down. If you have no idea what I’m talking about (I don’t blame you, trying to type this took me about 20 minutes) then check out this video. 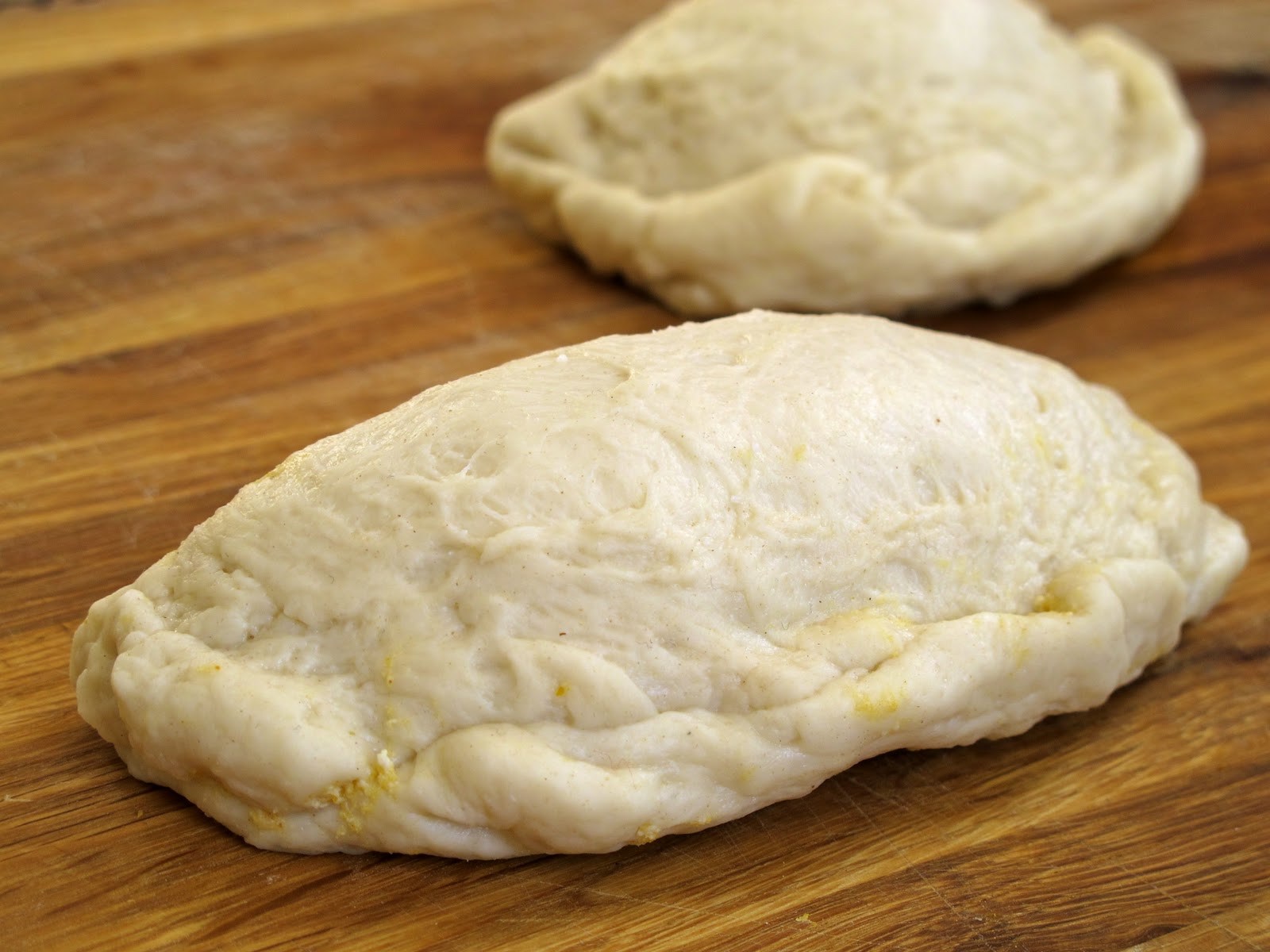 Once these little pockets of goodness were ready, I started to make the brown butter sauce. Because I’m essentially cooking the “dumplings” in it, I made sure not to let the butter brown too much because I didn’t want them to burn and I wanted to let the insides get all hot and melty. So to do this, turn your heat to medium, add the butter, and once it starts to bubble stir in your bay leaves. 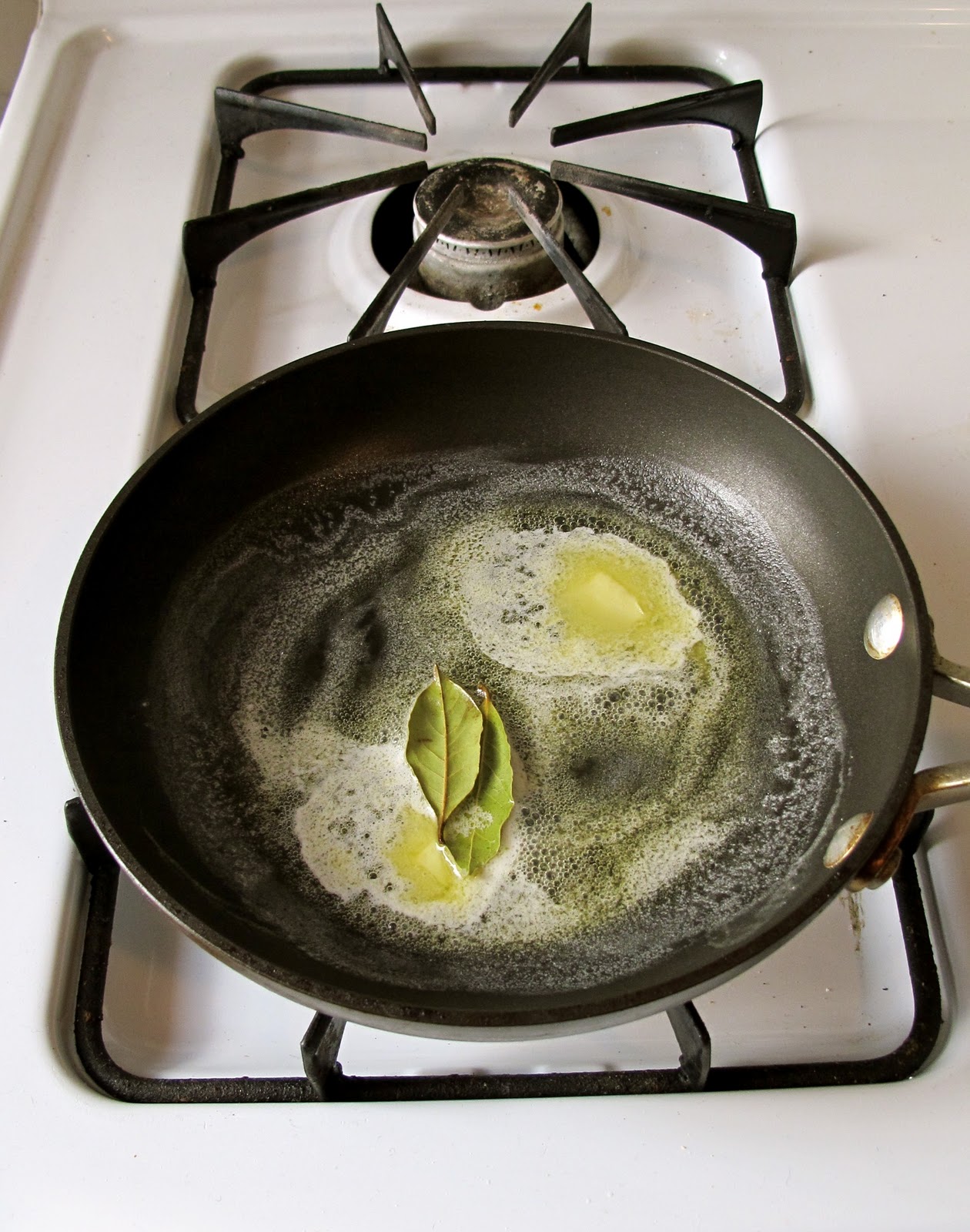 Then, plop your little dumplings in there and let them sizzle for about five minutes. Your kitchen should start smelling really good. The sweetness from the dough mixed with the nuttiness and herbal awesomeness from the sage brown butter… Ohh la la! 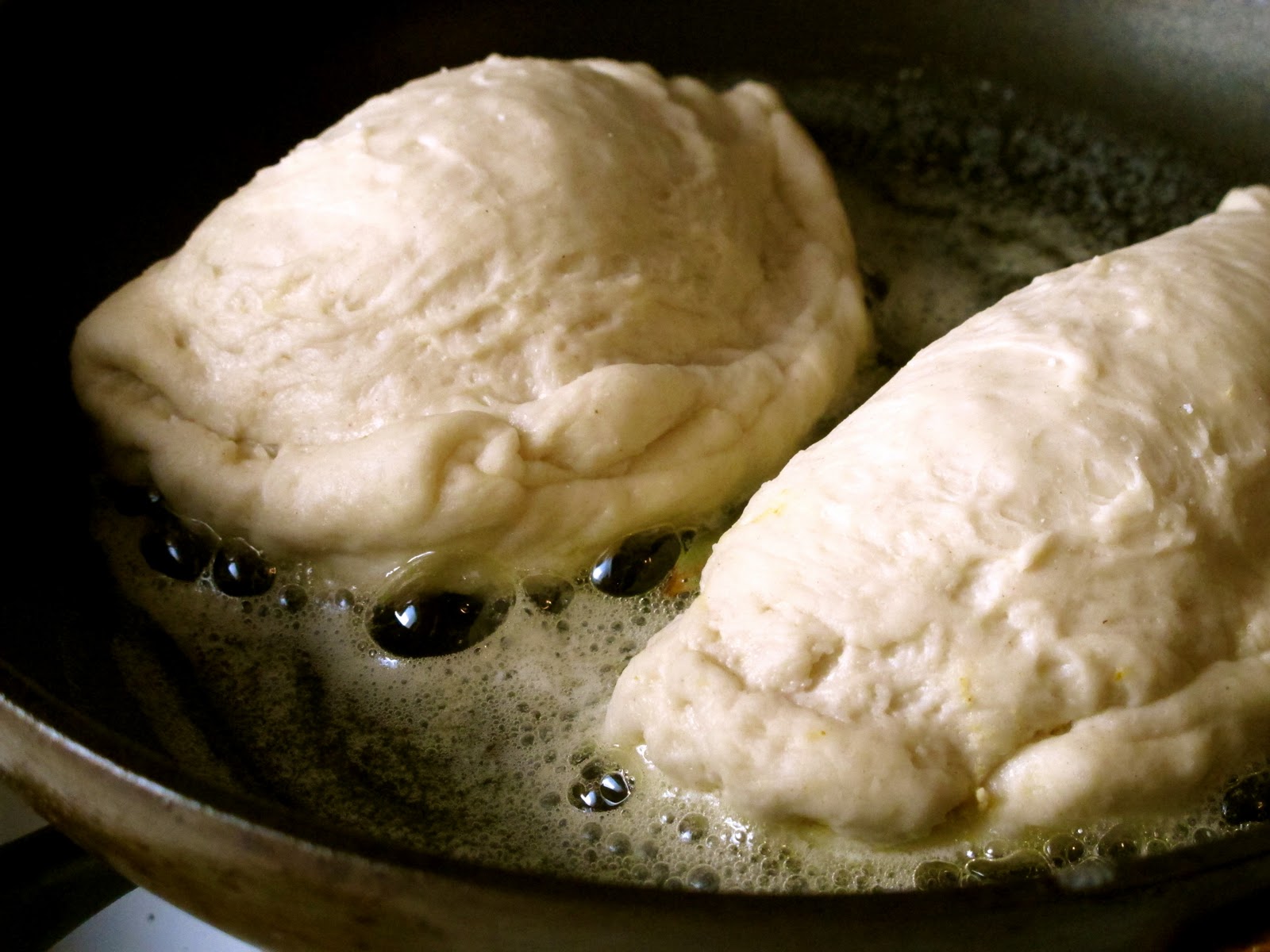 After about five minutes the crust should resemble the picture below. If it doesn’t, let it cook for a little while longer and if it does, then flip it! If your dumplings were big, then feel free to rest them against each other to cook the sides that aren’t brown. I did so on the opposite side of the seam so I could get more crunchy bites. 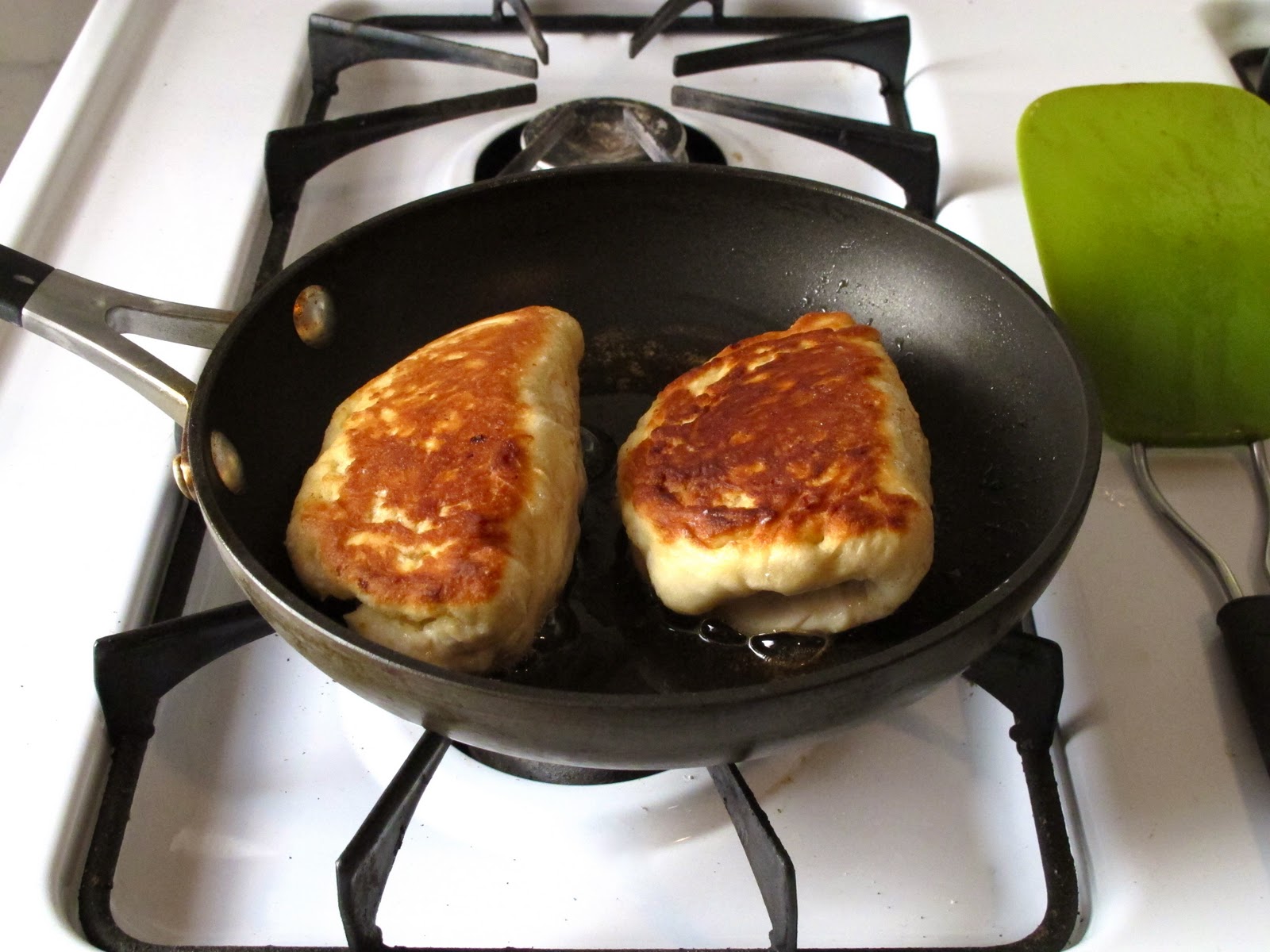 Then when they’re all nice and golden, take them off the skillet and immediately sprinkle them with salt. Make sure to let them rest for about a minute before you serve them.

So yeah, that about sums it up. I hope you all had an awesome Halloween and I’d love to know what you were so leave a comment below – I get a kick out of that stuff. I was Garcia from criminal minds one night and a failed baby Sinclair from Dinosaurs the other. So I’ll just leave you with this grilled cheese song until next week when I bring you another unique method for cooking GC’s.