Happy early 4th of July dear readers! My favorite thing about this holiday is that you have the perfect excuse to lay in the sun, binge eat, and drink way, way, way too much, because hey dudes – it’s America. I’m also super excited because it’s my besties birthday. You might remember last year’s incredibly fantastic fat-ass-tic American themed grilled cheese that she inspired.

But this year we’re switching it up and getting out of the city. Come Friday at six, we’ll all be heading out to the Jersey Shore to fist pump at Karma to do some serious grilling and boozing. Oh, and we’ll probably see the beach too (I guess). So before we leave, let me share with you this year’s hotdog stuffed grilled cheese. It’s everything your mother loves, inspired by Rosie the Riveter, made with authentic coney island franks, it’s everything that Hitler hated.

So, Like your motorhead cousin’s hopped up IROC, here are the red-white-and-blue-inspired ingredients that make you die sooner, but tastes really freakin’ good. 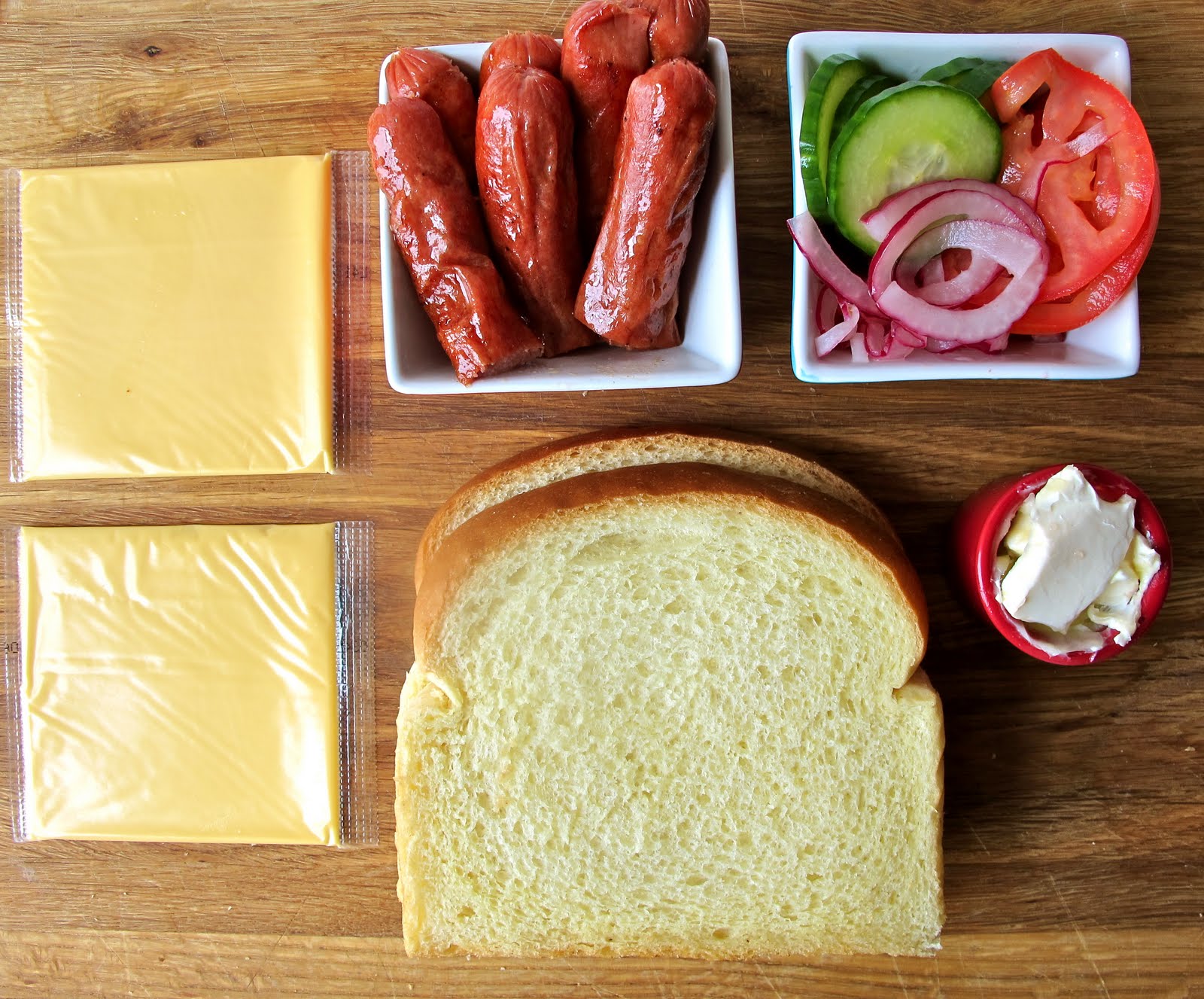 I know I run a grilled cheese blog and all and that I’m supposed to be some sort of cheese snob, but there’s honestly nothing more comforting than a Kraft single. Although I may be buying the organic ones from Trader Joe’s these days (they don’t melt as good, blah), I still have some weird bond with this childhood favorite. I know it’s strange. I don’t know why i feel this way, but I really do. Maybe it has something to do with the fact that I basically lived off them as a kid. ANYWAYS! back to the point, go a head and place one Kraft single onto a piece of Texas toast.  (and uhh remove plastic, ha) 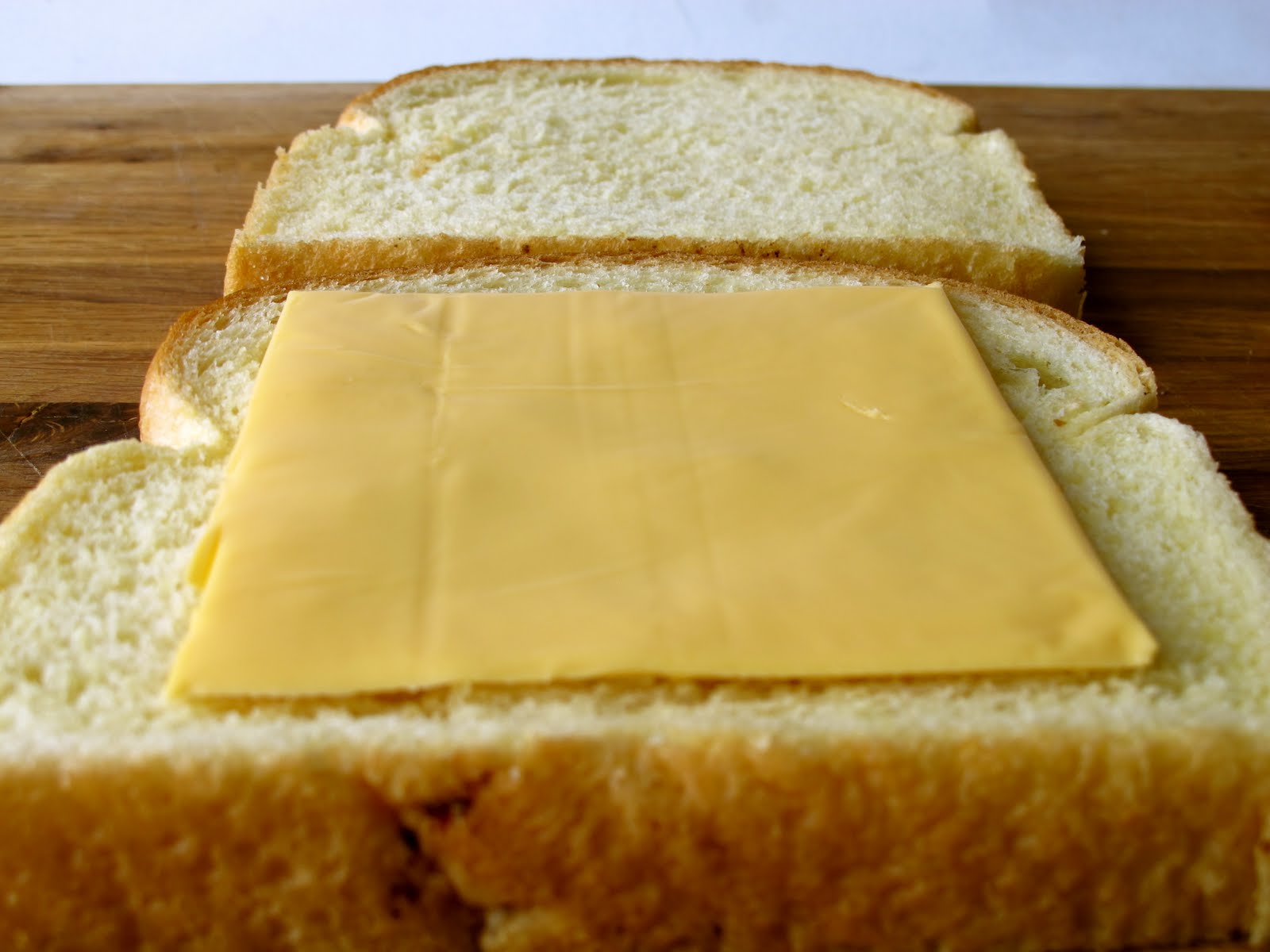 And what’s more 4th of July than hot dogs, so pile ’em on. I cut mine down the middle so they would lay prone in a stress position for the 350 degree heat. Multiple judges and justices have ruled that this cannot constitutionally be construed as torture. 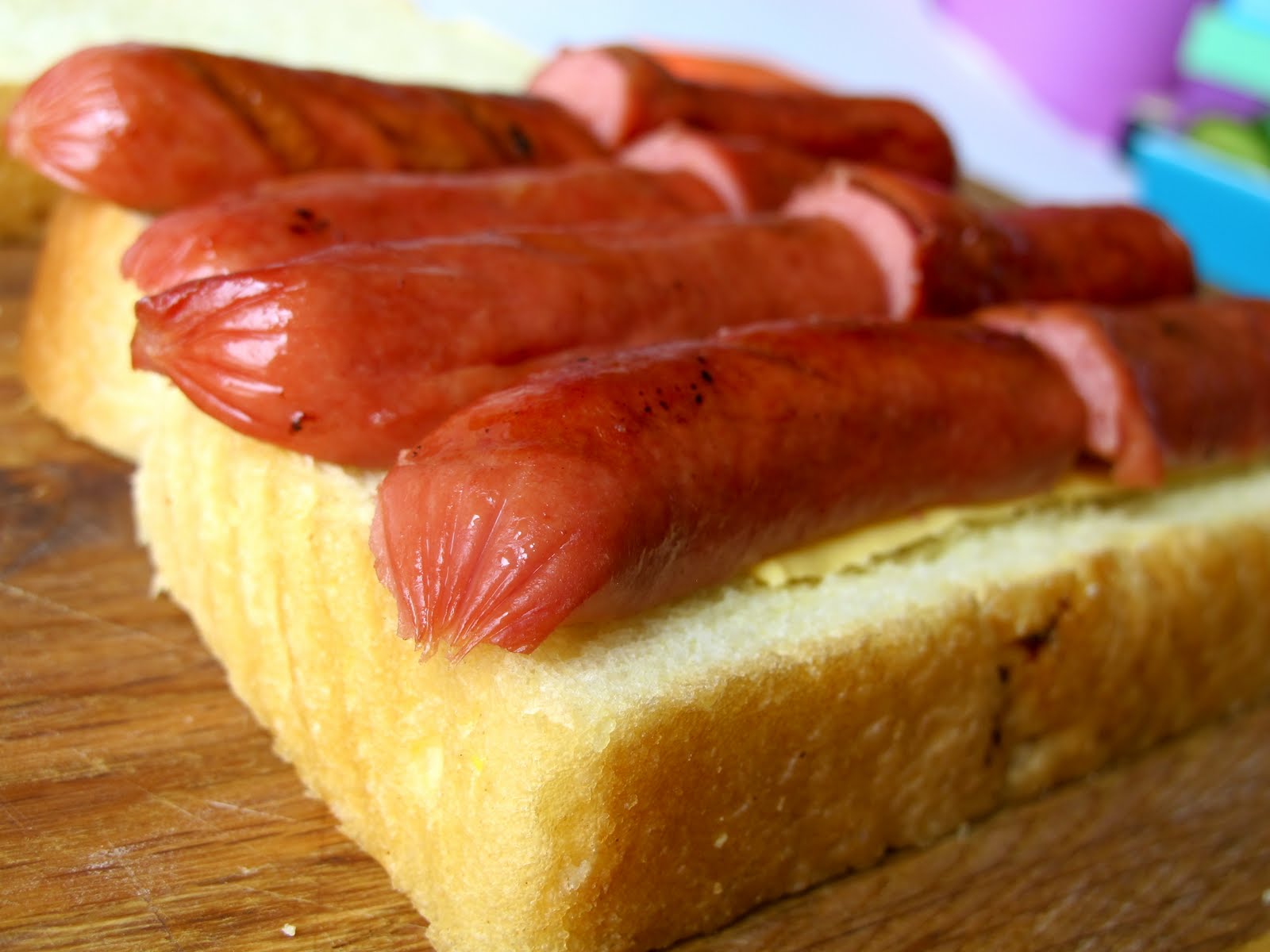 With this next part, let me preface this by saying that my friends and I are all pretty obsessed with this street food vendor called AsiaDog and we eat it on the reg. They basically just pile a bunch of yummy Asian ingredients on top of hotdogs, and one of our favorites is the Asian slaw which sort of tastes like this cucumber salad that my mom used to make all the time. So a few weekends ago my buds and I were out visiting one of our loveliest friends for her garden opening in Sag Harbor and I made a big bowl of cucumber salad to go along with the stuff we were grilling. A few bottles of wine later, my genius friend started piling the cucumber salad on top of her hotdog and a revelation occurred – she had created our own version of AsiaDog and the best thing EVER.

So to make your own cucumber salad, basically just cut up some Roma tomatoes, a cucumber, and some red onion, then drizzle with some rice wine vinegar and sprinkle a pinch of sugar and some salt.  let it chill for about an hour and then you’re ready to enjoy! Once you’ve got that taken care of, put it on the sandwich. First the tomatoes, 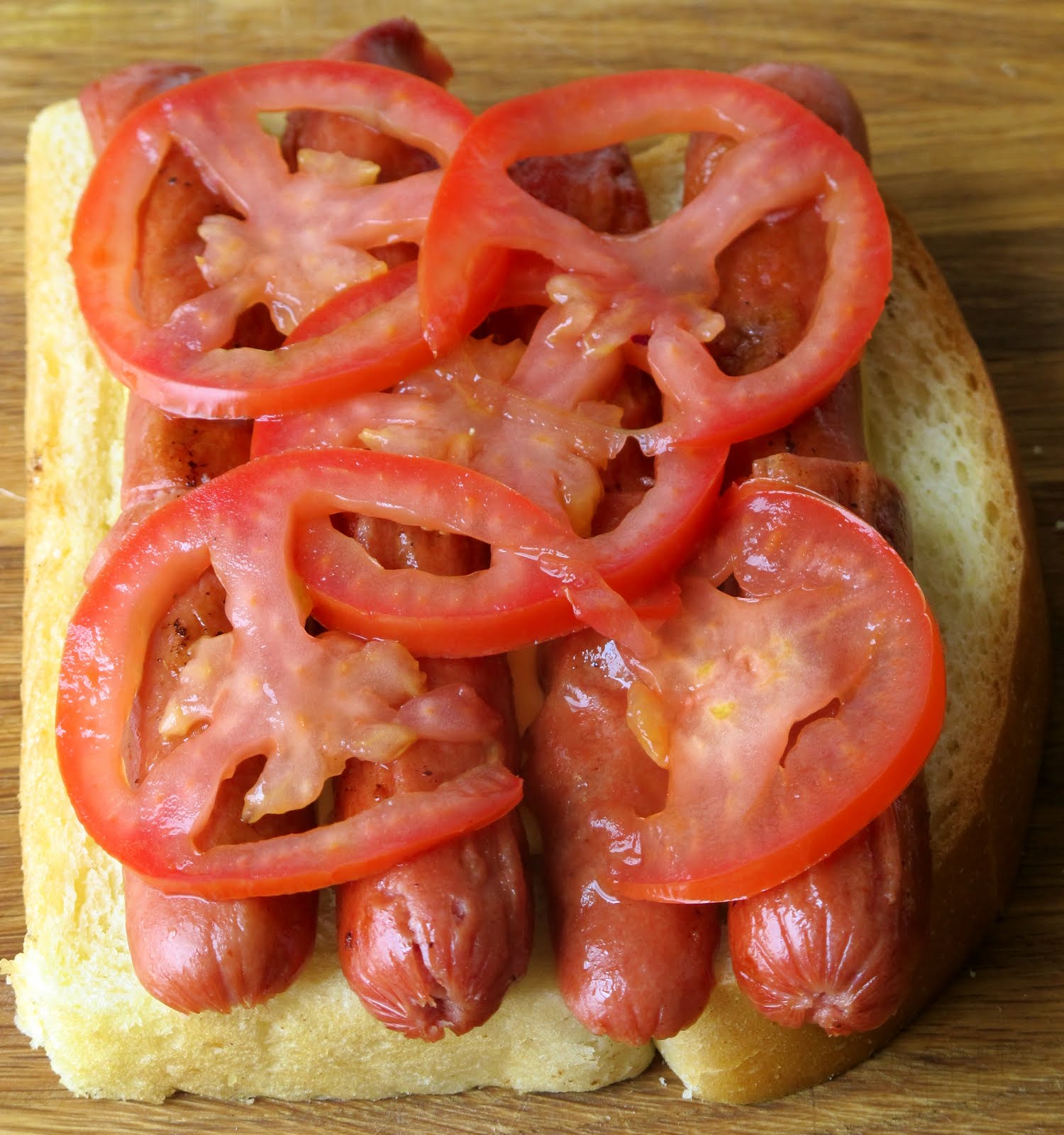 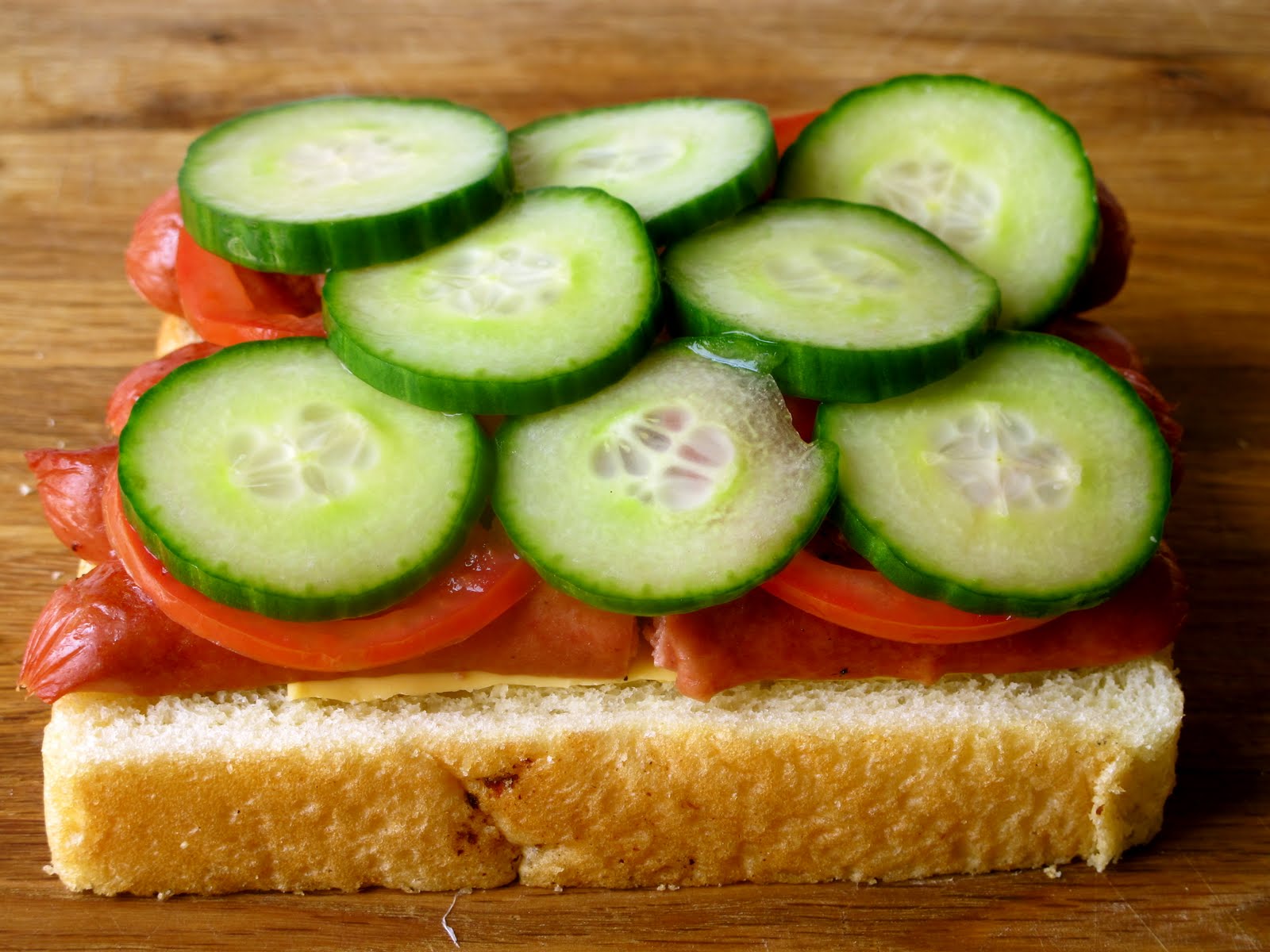 And lastly, the onions. 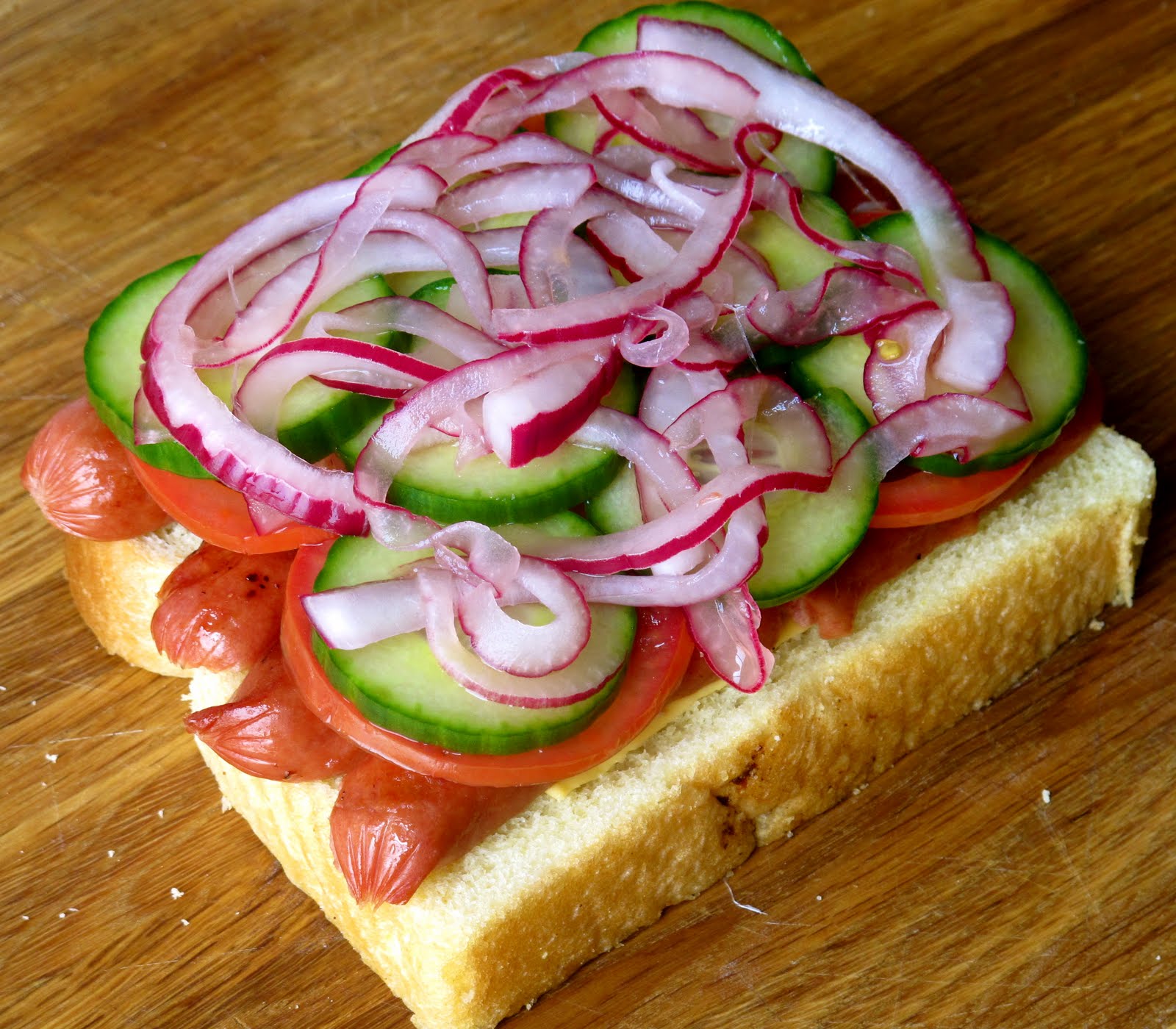 Then top it off with another slice of the good ole’ single.

Finally, put on the topper. Fireworks are almost here… 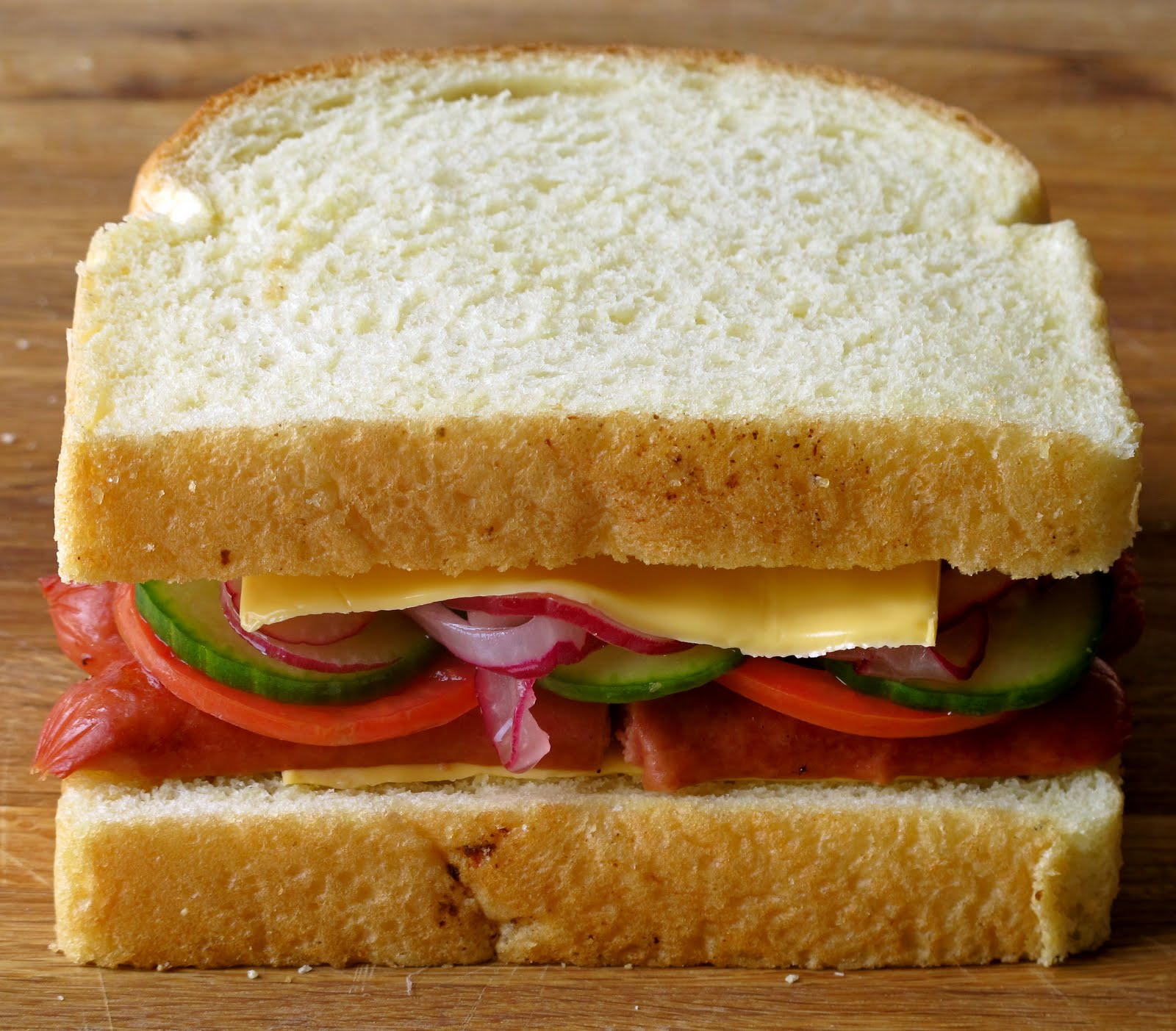 Butter the bread, and place in a medium hot pan. (almost, almost!) 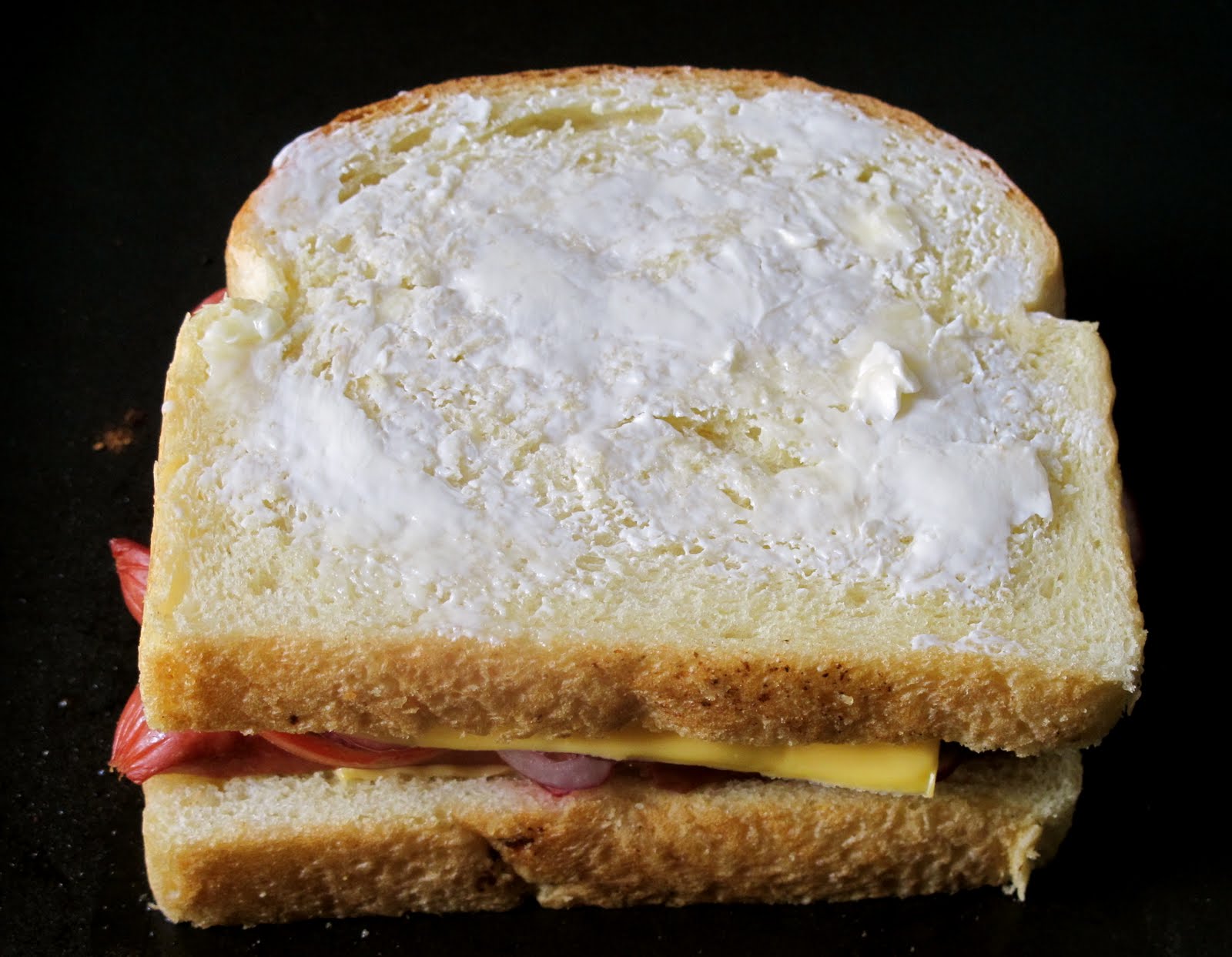 After about 4 minutes it should be getting nice and crusty – at this point you’ll want to flip it and FLIP OUT because it’s about to
be soooo delicious. 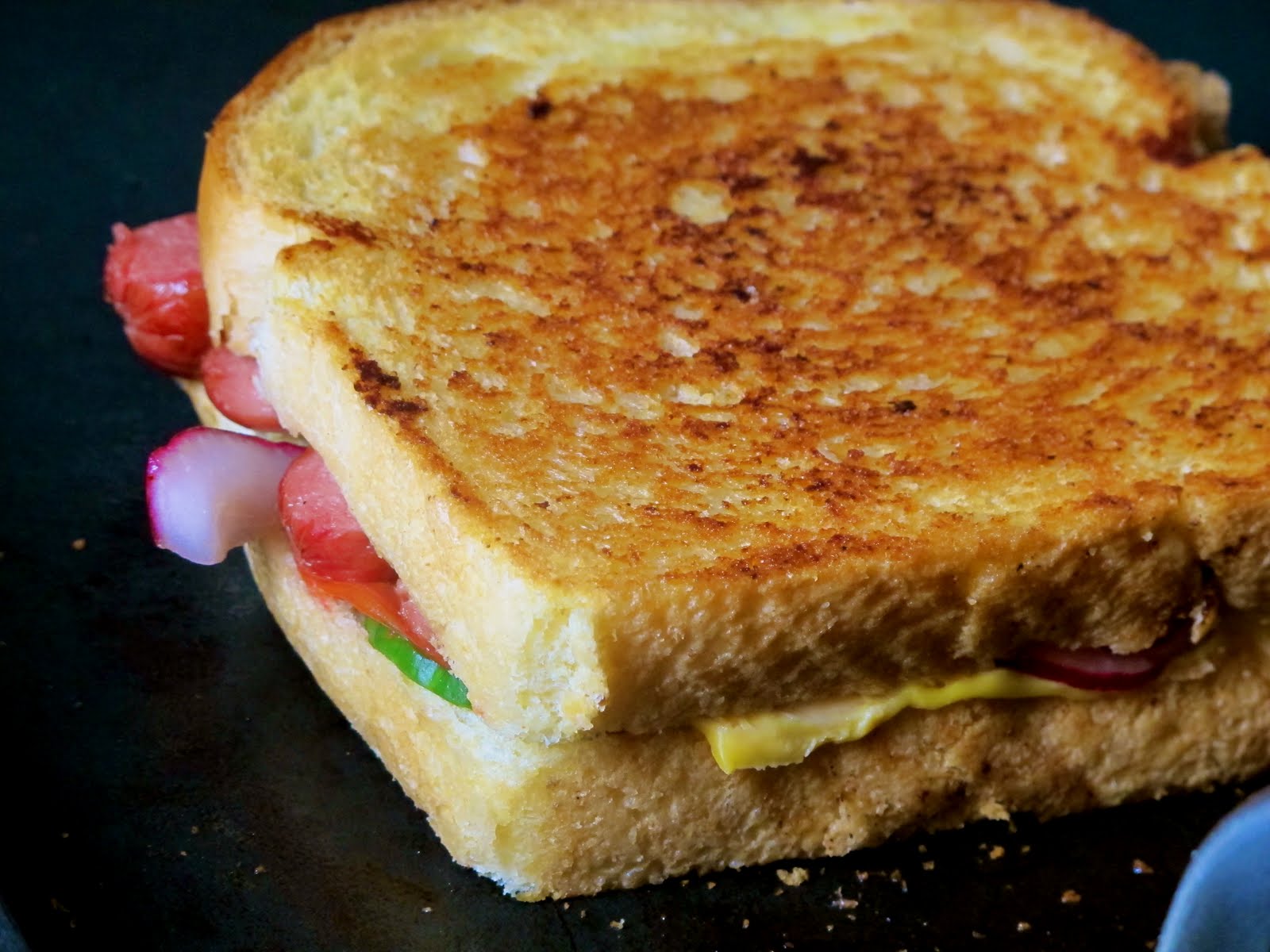 Once it’s done, take it off the flame and let it sit for a minute to set. 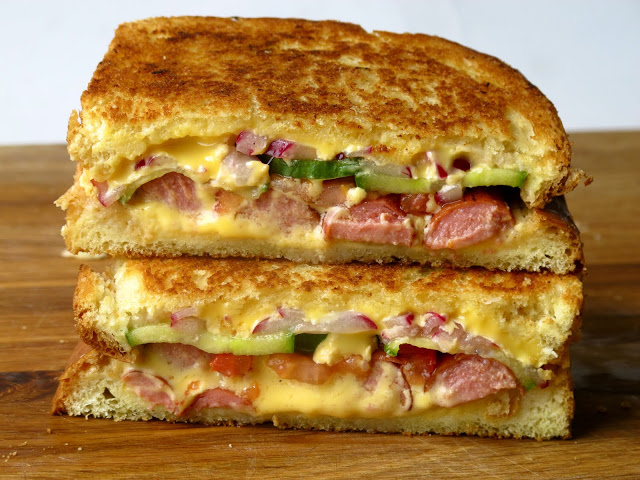 Oh and in case you were wondering – yes, this it is Harrison Ford’s personal favorite and in fact the only thing he will eat in certain moods.