You are here: Home / Recipes / Grilled Cheese Recipes / Señor Snappy – Roast Pork, Queso, Plantain, Pickled Red Onions and Jalapeno Grilled Cheese
¿Como estas mis amigos? Are you super excited that today is Cinco de Mayo? Because I sure as am.  I’ve got my tequila chilling in the fridge and my El Guincho (NSFW) record playing on repeat.  The limes and salt are set up like a shrine to our Lady Guadalupe and I’ve got my sombrero party shoes on.  If only all of my friends didn’t have real jobs so they could be here drinking with me.  But yeah, so to pass the time until happy hour rolls around – I’m making a fiesta grilled cheese for you and all your amigos to enjoy. Es muy bueno! 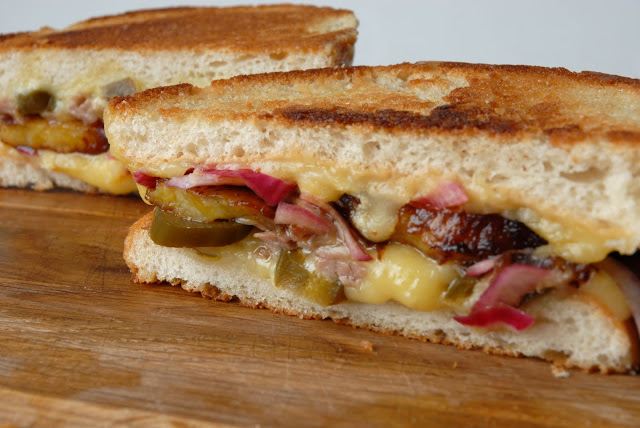 So what’s in this bad boy? 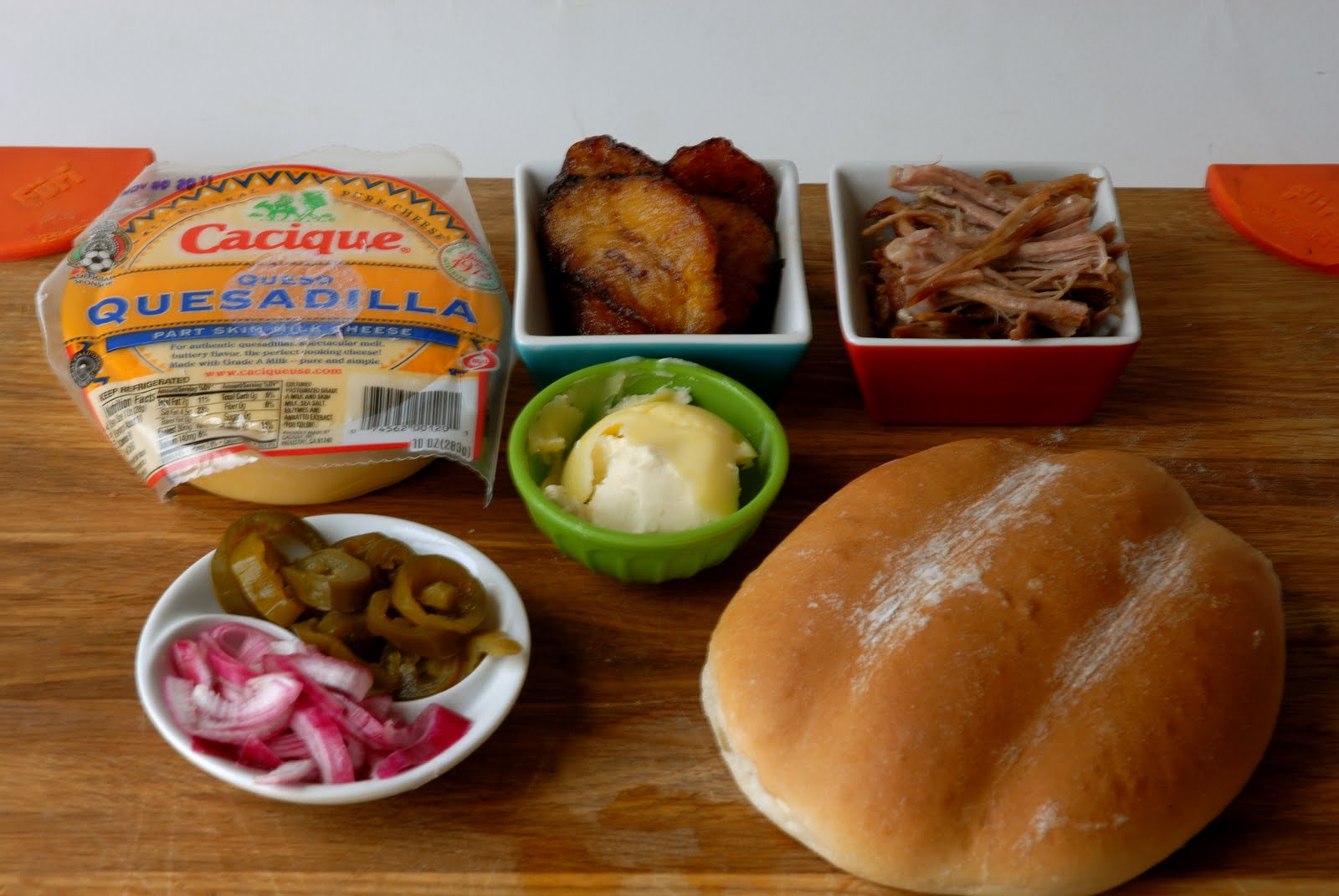 One of the best parts about living in Williamsburg is the huge Hispanic population that makes up the other half of hipsterdom.  I don’t even have to get my passport stamped in order to have access to a zillion amazing little Ethnic markets.  I love it, I can find anything (and I mean anything), but most importantly I found the bread that tortas are made from (which are called Bolillos) at a super cute bakery called Grand Morales. This delicious disk shaped crusty french-like bread is absolutely perfect for this grilled cheese. It’s thick and hearty and holds up perfectly when it’s packed with tasty fillings. 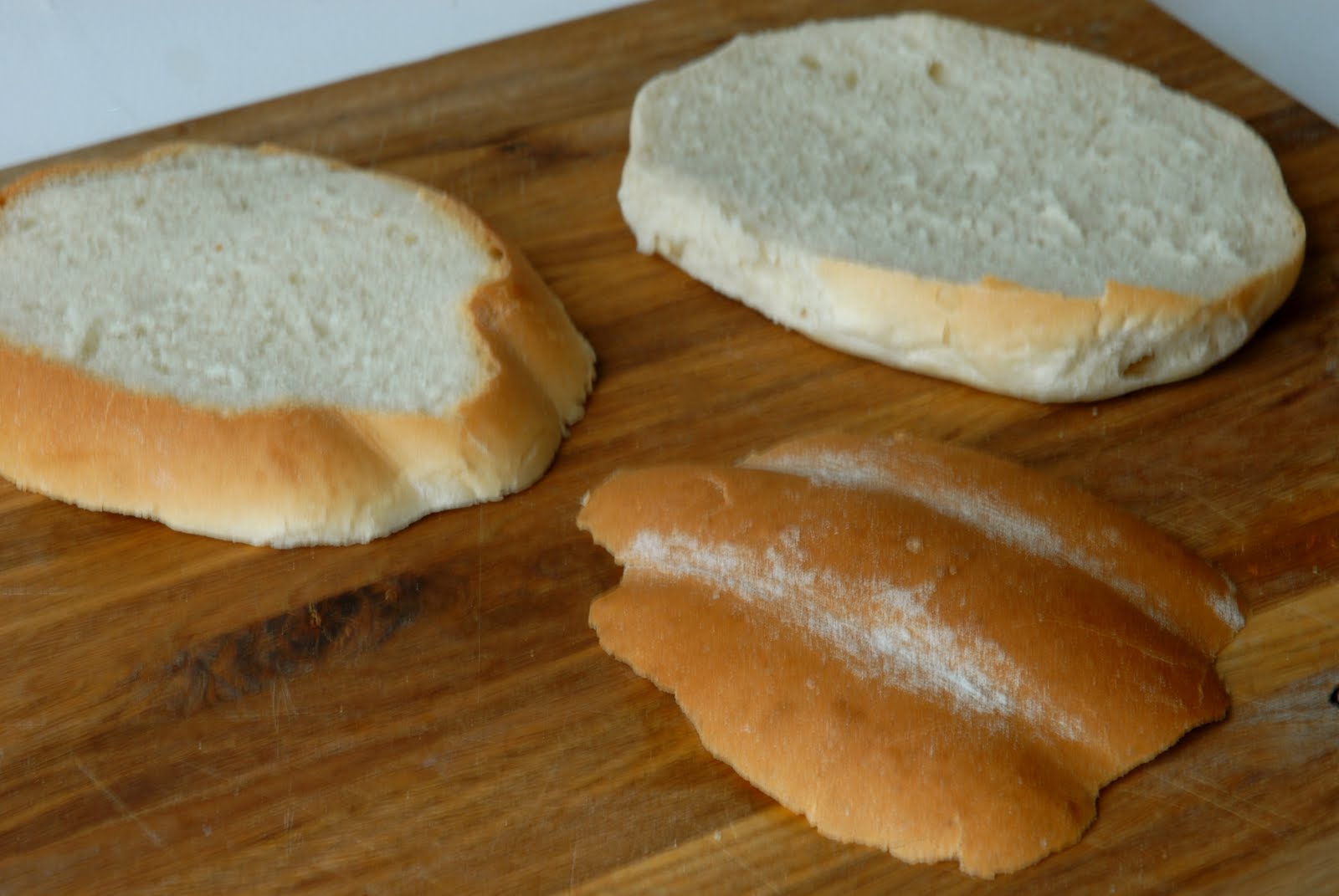 Now it’s time for the queso! While I was at the market I found an entire shelf full of different kinds of queso.  Now let me inform you that I took like five years of spanish and the only thing I really retained was the names of food but beyond that I was totally screwed. I had absolutely no idea what to buy so I mustered up my español courage and asked the cashier what was the best melting cheese by wiggling my fingers in a poor attempt to sign “melt”. She directed me to queso quesadilla which should have been the most obvious choice, cause com’on duh quesadilla cheese – I should know that.

But yeah, so I got my queso quesadilla and shredded it and sprinkled it on to one half of the sandwich. 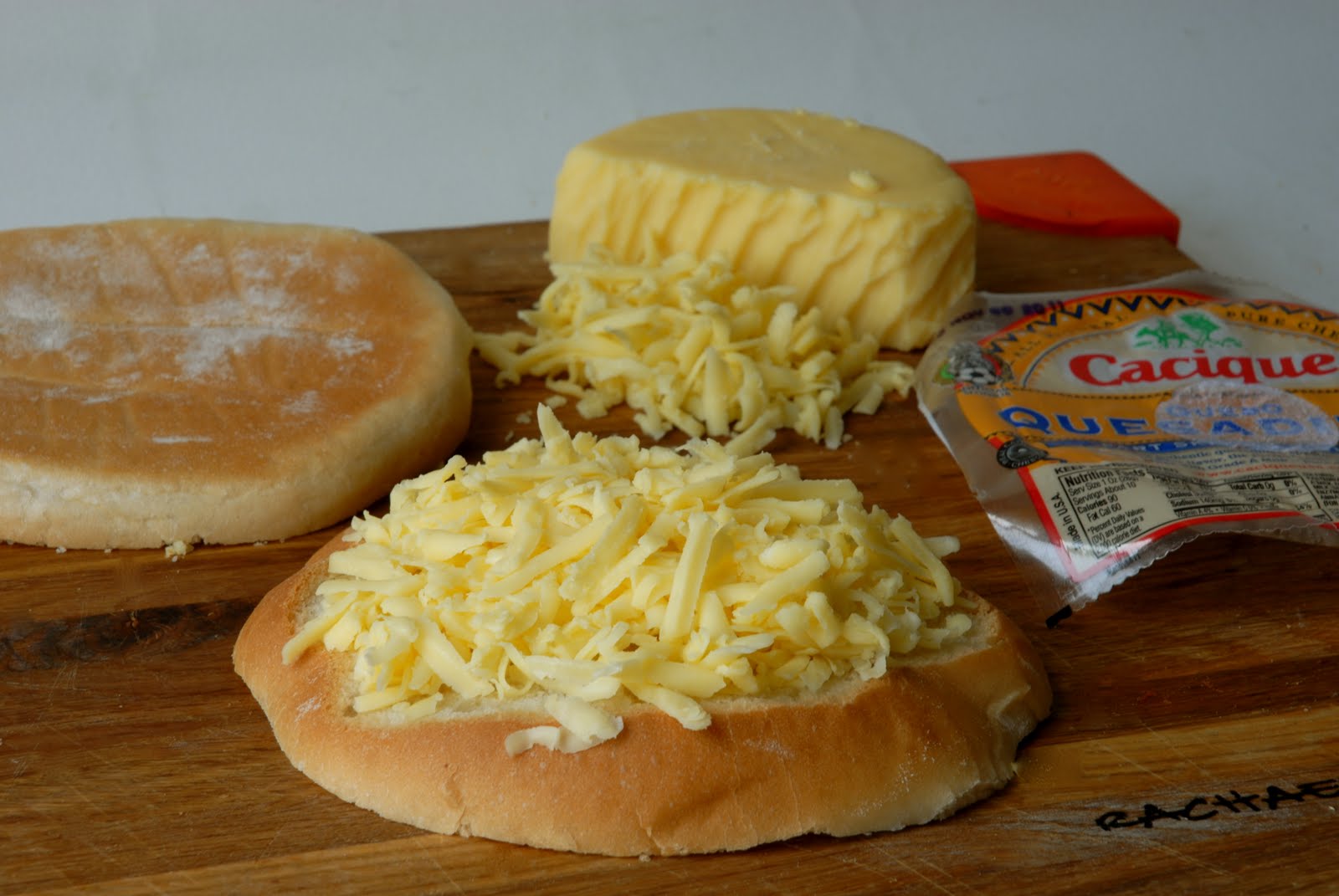 Once the cheese was on, I delicately placed some pickled jalapenos on top.  For these, I bought some of the pre-sliced nacho jalapenos at Whole Foods and drained them and then put them in the leftover brine from my favorite pickles in the world – McClures of Brooklyn.  They’ve been in there for quite a while but having been soaked in vinegar made them extra tasty.  They were still spicy but they were  also a little sweet as well. 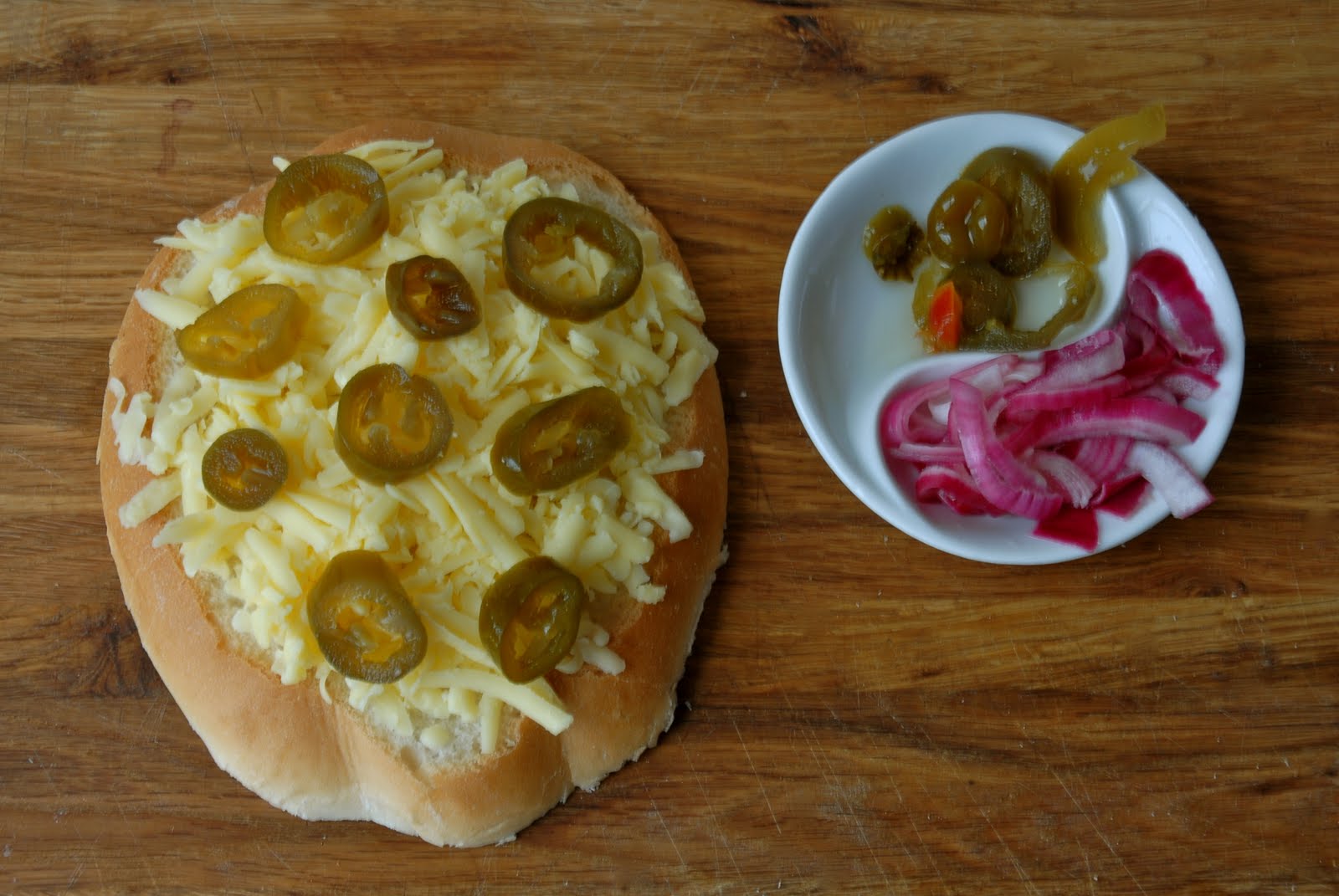 Next came the roasted pork.  I cheated and bought mine pre-made but if you have time you should totally make this yourself.  When I was browsing recipes I came across this little gem, but with finals approaching and me scrambling to find a big girl job, I sadly resorted to the pre-made stuff to make my day a little easier. 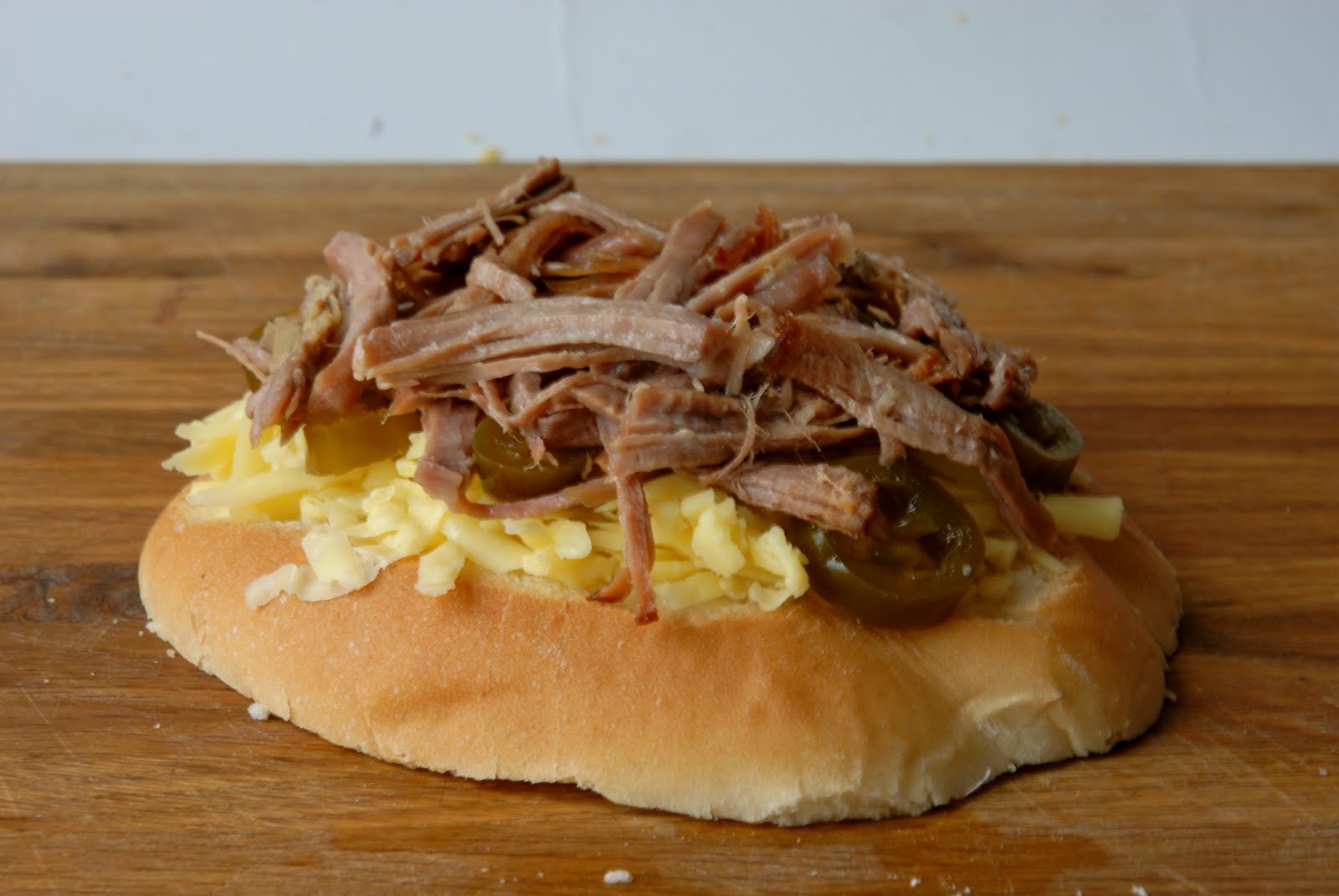 After that I put on the maduros.  If you’ve never had these and are wondering what in the world they are, let me tell you.  They’re the best things in the world.  They’re basically fried green plantains that look like big bananas and become sweet and caramelized once they are cooked in oil.  I love ’em so much. 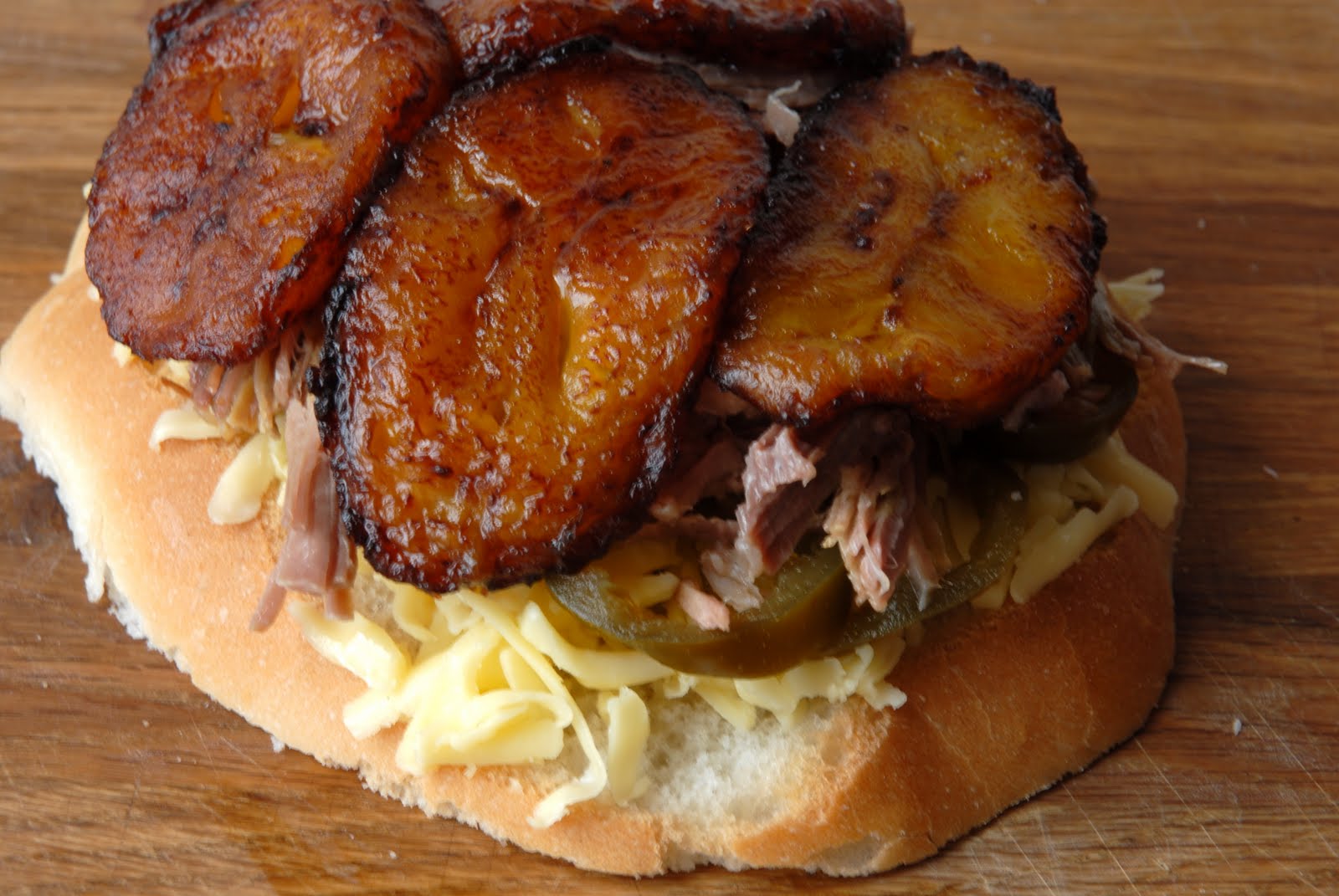 Now at this point I put on some pickled red onions to balance out some of the sweetness.  To make these, I thinly sliced a red onion and then soaked them in red wine vinegar for like 30 minutes. 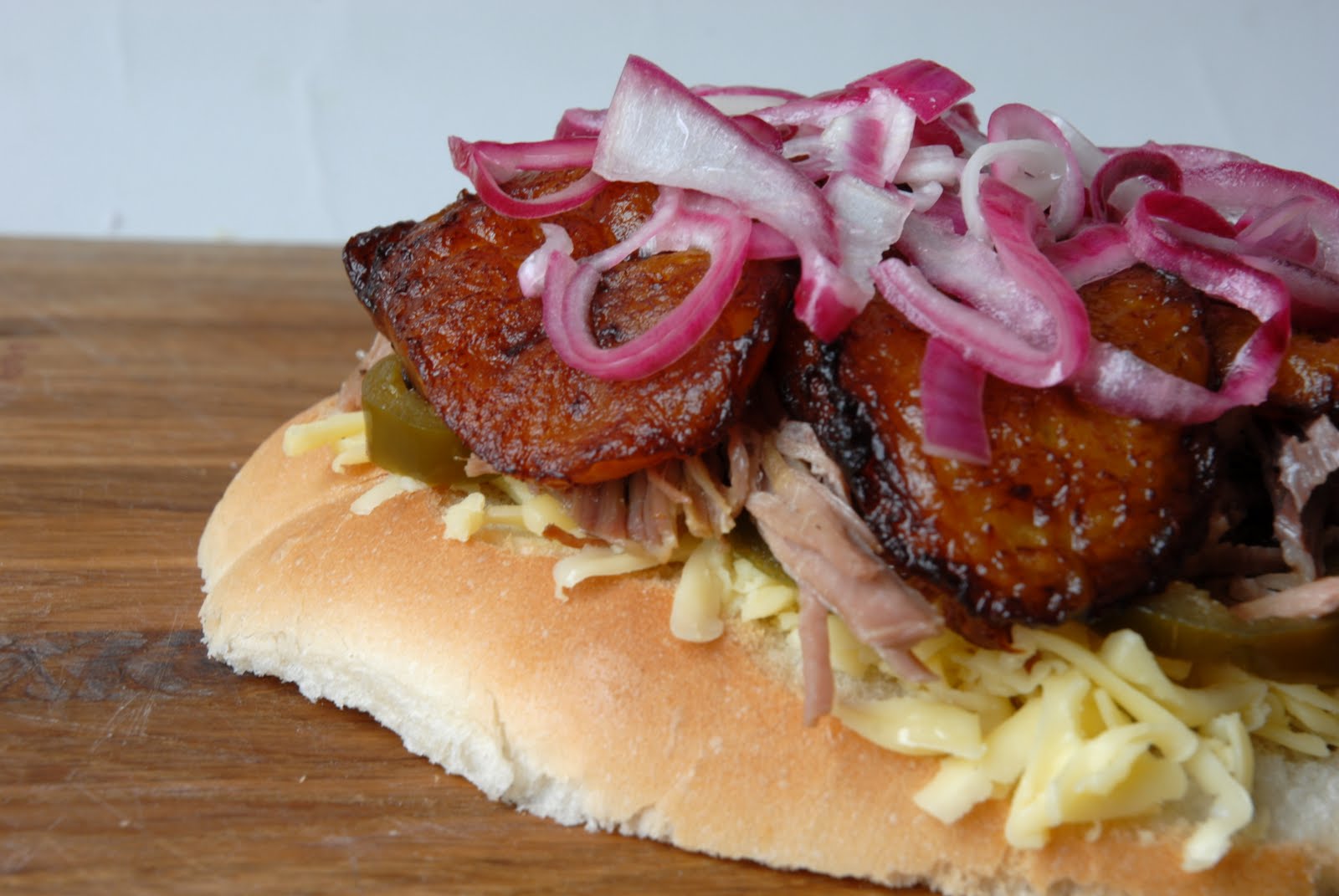 Since the sandwich was getting rather high, I decided it would be best to grill the two halves seperately so the cheese could adhere to both pieces of bread and essentially glue the ingredients together. 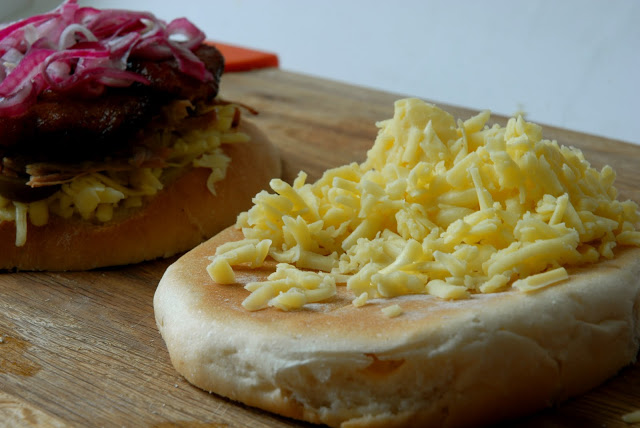 I went ahead and melted two pats of butter on medium heat and put each half in and smeared them around in the butter. 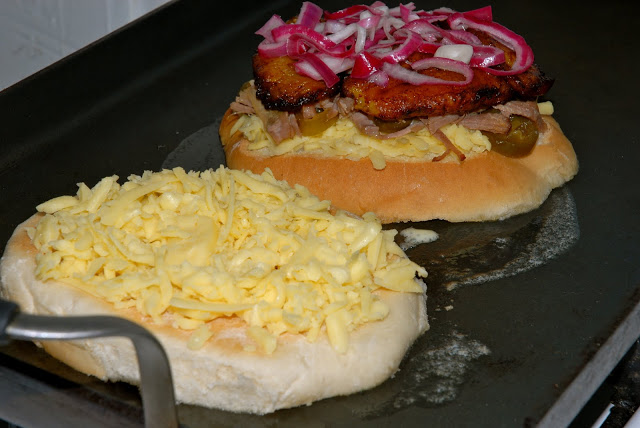 I let them cook for about 4 minutes on each side until the cheese started getting ooey and gooey and melty and goodie (sorry, overboard – i know, but you get the point). 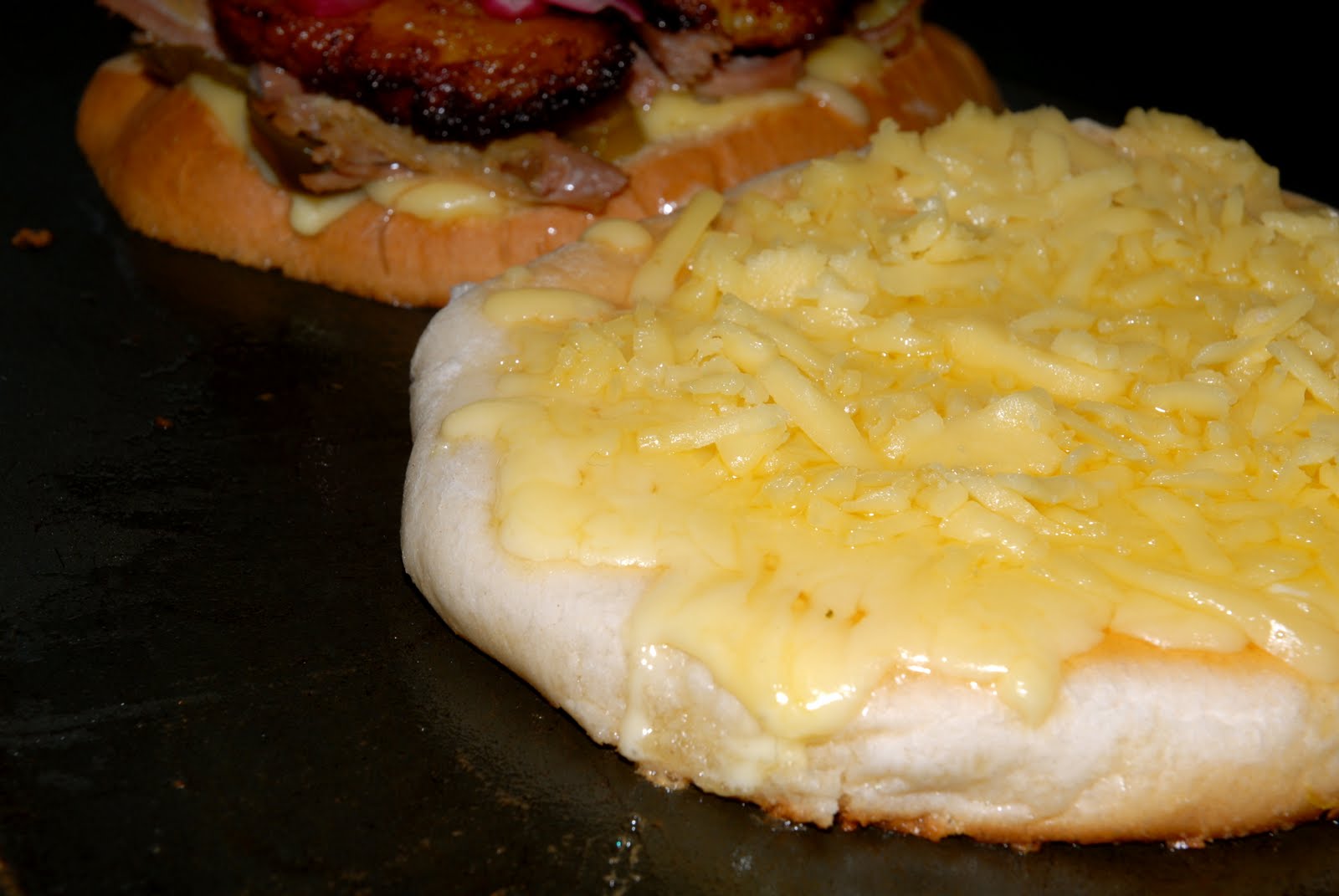 Once I could tell the cheese had melted and wasn’t going anywhere, I carefully put the cheese-only side on top of the massive-amounts-of-ingredients-side and let the cheese work it’s magic. 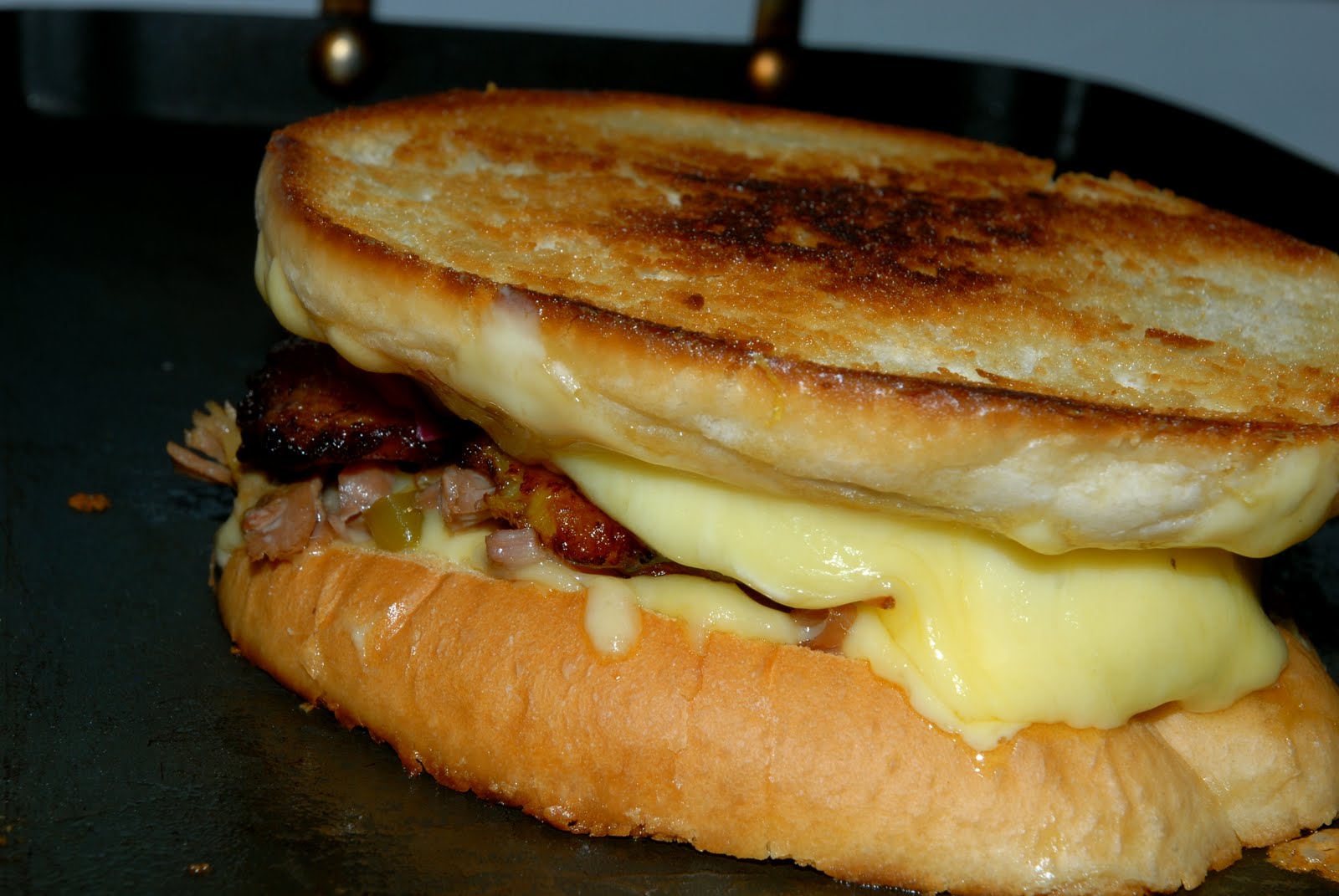 After another minute of this delicious grilled cheese sitting in my skillet, I removed it and sliced it half, and then fought off my roommates from eating it so I could snap some pics. 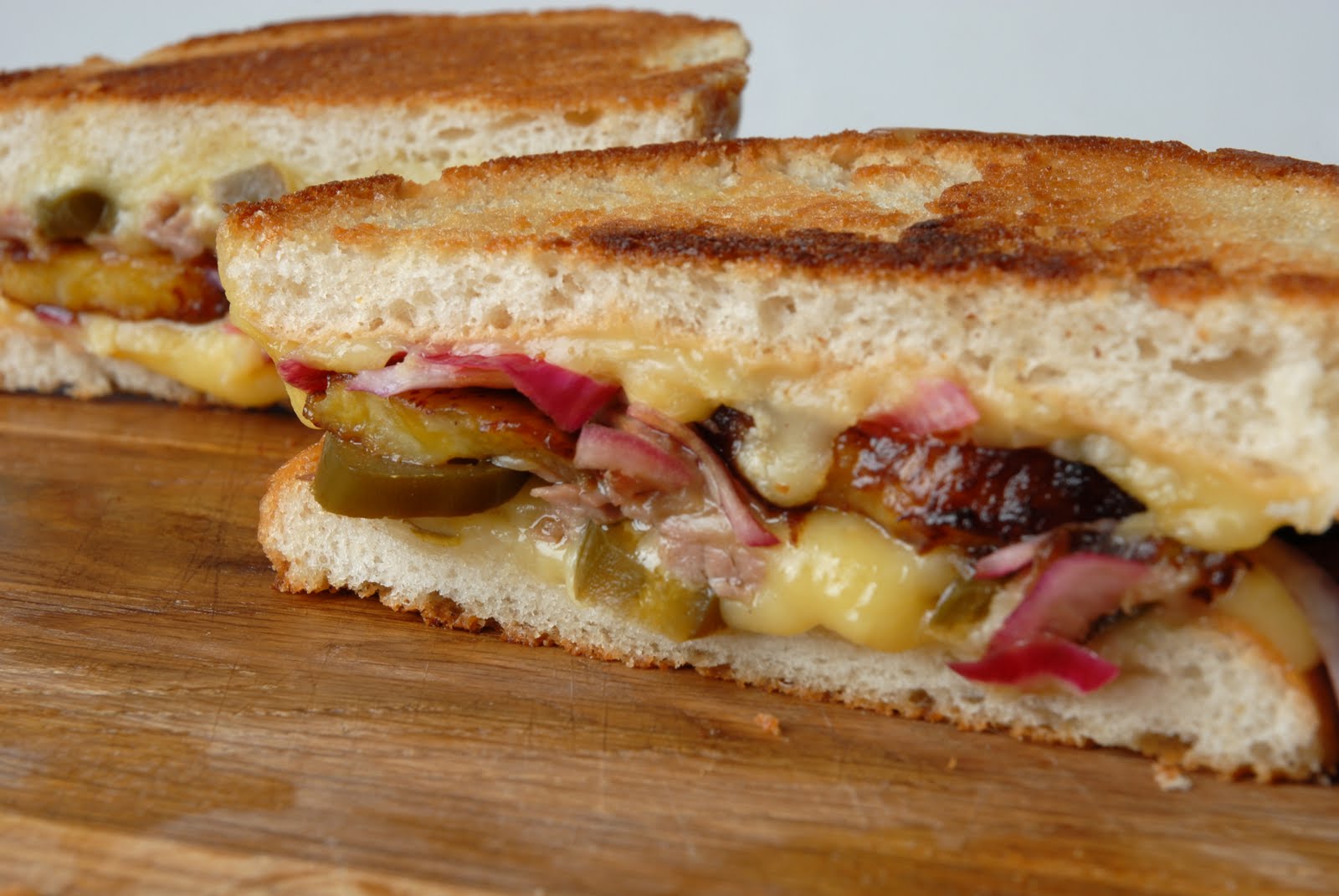 Feliz Cinco de Mayo! Salud! And don’t forget to drink plenty of water before bed, tequila hangovers are no joke.