You are here: Home / Recipes / Grilled Cheese Recipes / Thanks’gibbons – Leftover Thanksgiving Grilled Cheese
This Thanksgiving leftover grilled cheese may not be pretty, but it sure is delicious! Imagine a stuffed biscuit filled with all the leftovers and then smothered in gravy. It’s heavenly! 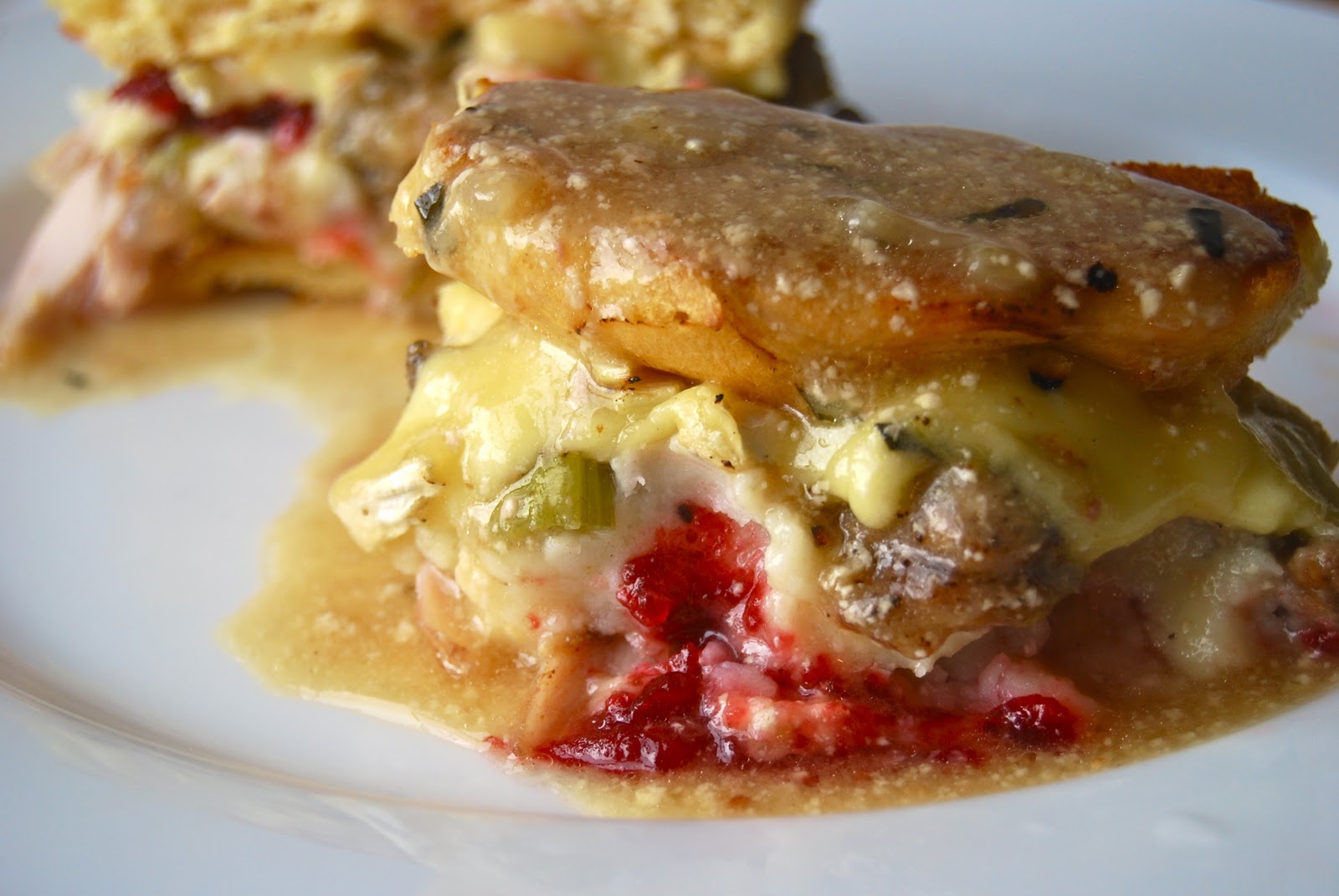 For the first time in my life I didn’t spend Thanks’gibbons with my family.

I was really depressed about missing my Uncle Bro’s mac & cheese that he makes me every year and also that I was going to miss out on a crazy Smith family drunken gorge fest.

I got over it though and perked up as soon as I heard that most of my friends were staying in the city as well.

We decided on having a giant potluck and because it was our first time doing this, we ended up with wayyyyyy too much food, but surprisingly enough we had the perfect amount of wine!

Anyways, I just had to do something with all these leftovers so I made a Thanksgiving leftovers grilled cheese sandwich. and here it is…. GIBBONSSSSSSSSSS!

How to Make this Biscuit Grilled Cheese 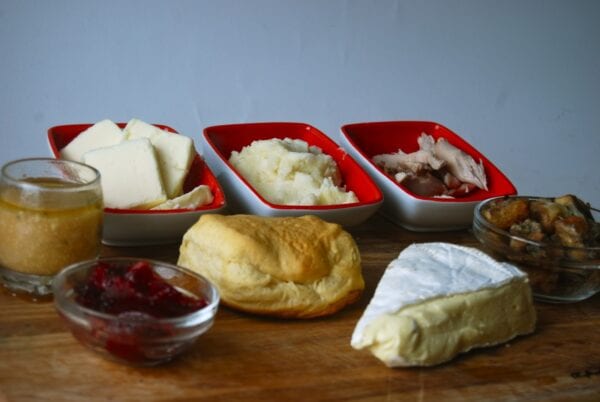 We had a ton of other leftovers, but I thought these would be the best ingredients without going overboard (even though it’s totally overboard already but whatevs).

The way that they’re stacked on top of each other is done so that each layer kind of glues the other one together so it won’t fall apart as you make it.

The first thing I did was cut the biscuit in half and then flipped it so that it was inside out. 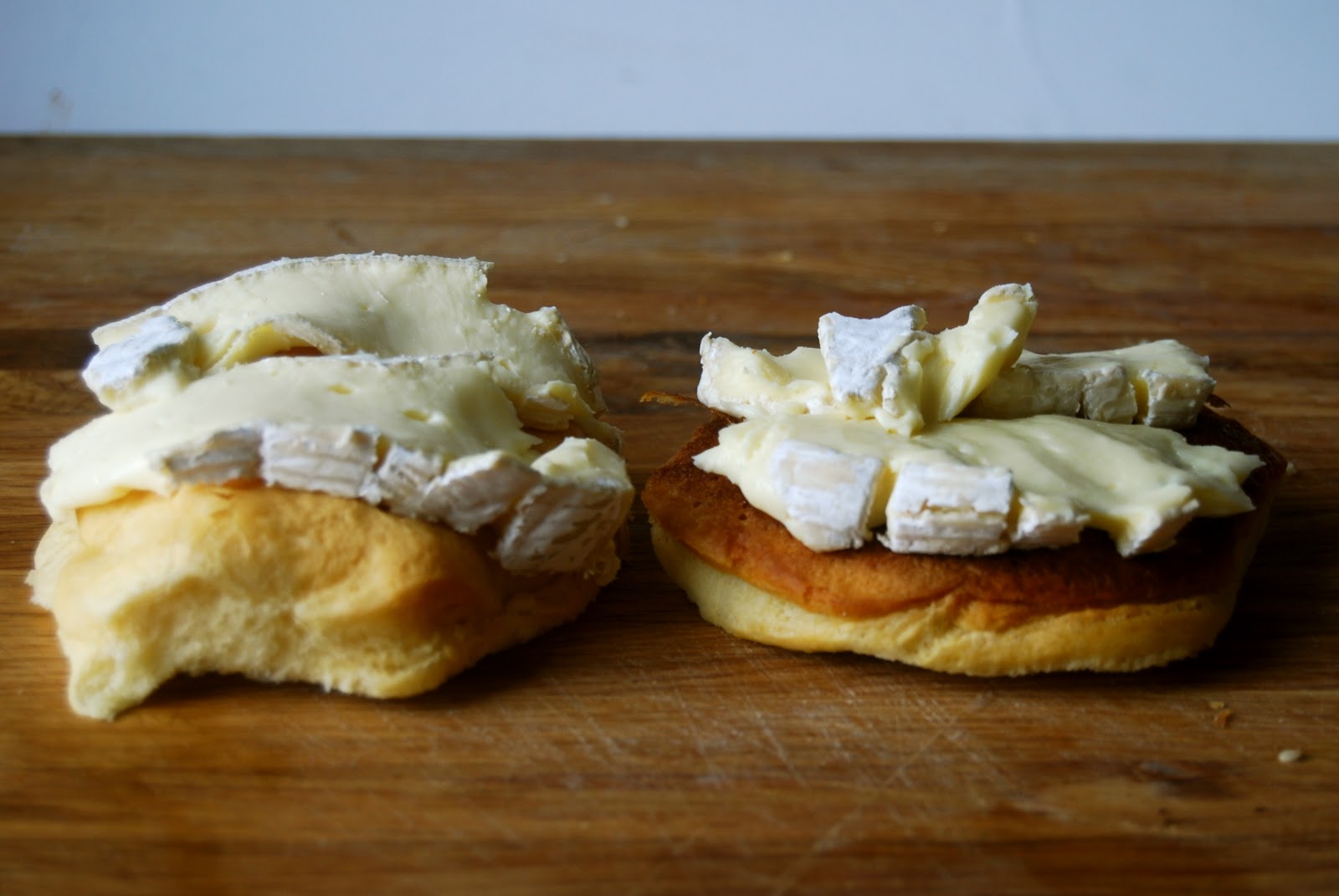 After that you’ll want to apply the brie.

I chose brie because it’s creamy and delicious and kind of tastes like butter and it’s super sticky.

Then I put the cranberry jelly on top of one side of the sandwich.

My mom sent me this delicious homemade jalapeno and cranberry jelly she made so I just had to use it, but feel free to use any of the leftover stuff you have on hand. 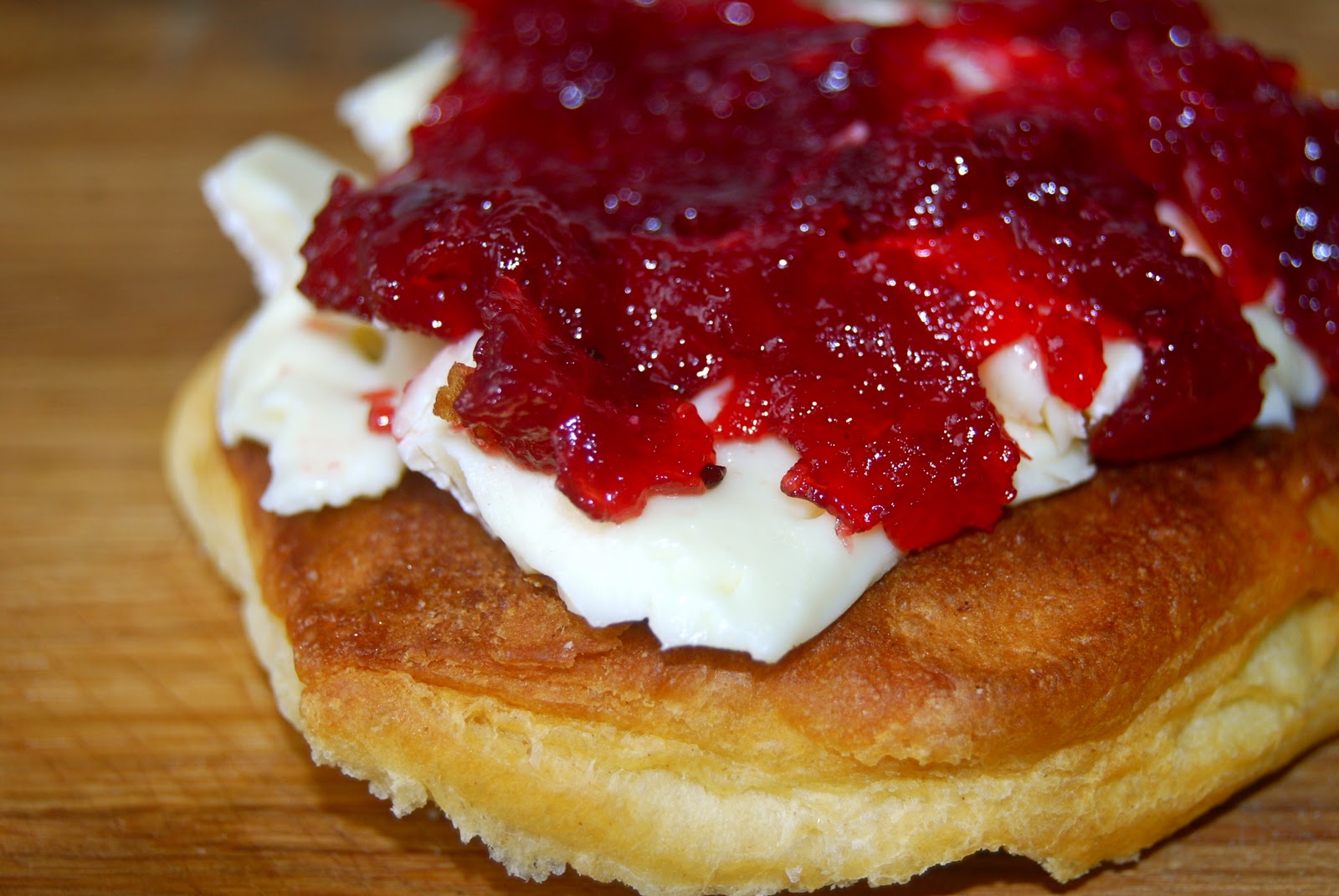 Now it’s time to lay on the turkey!

I used the little pieces of meat that were from the thigh because they were super moist and already in small pieces.

I’m not really a fan of dark meat because it sort of freaks me out, but this area is like a mixture of dark and light – the best of both worlds. 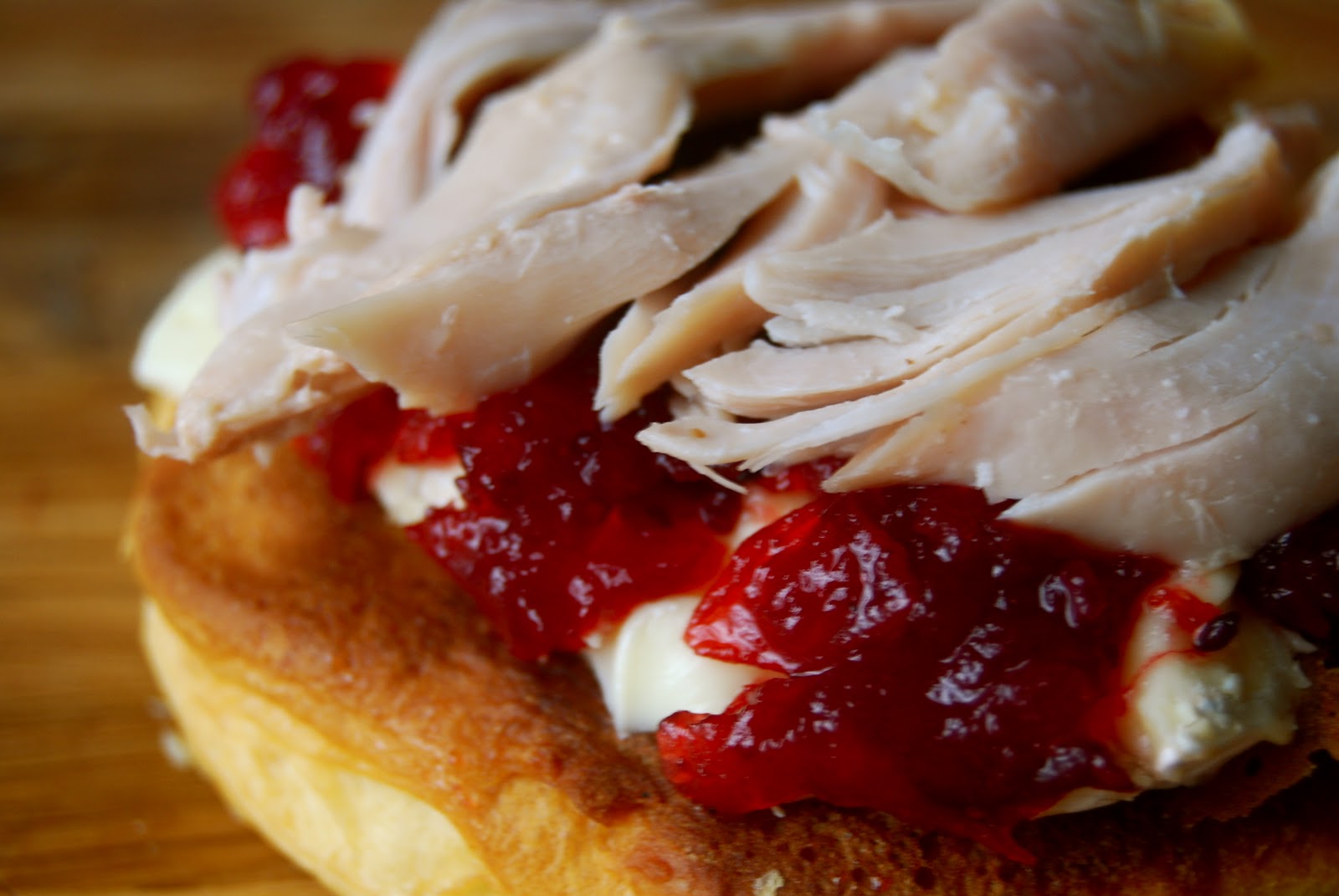 My roommate made these for us and they were wayyyy too addicting.

Basically super fattening but way too good to care about it.

This is a good ingredient to put in the middle because everything kind of bonds to it and nothing can slip out because it’s almost like the other ingredients are getting a big mashed potato hug! 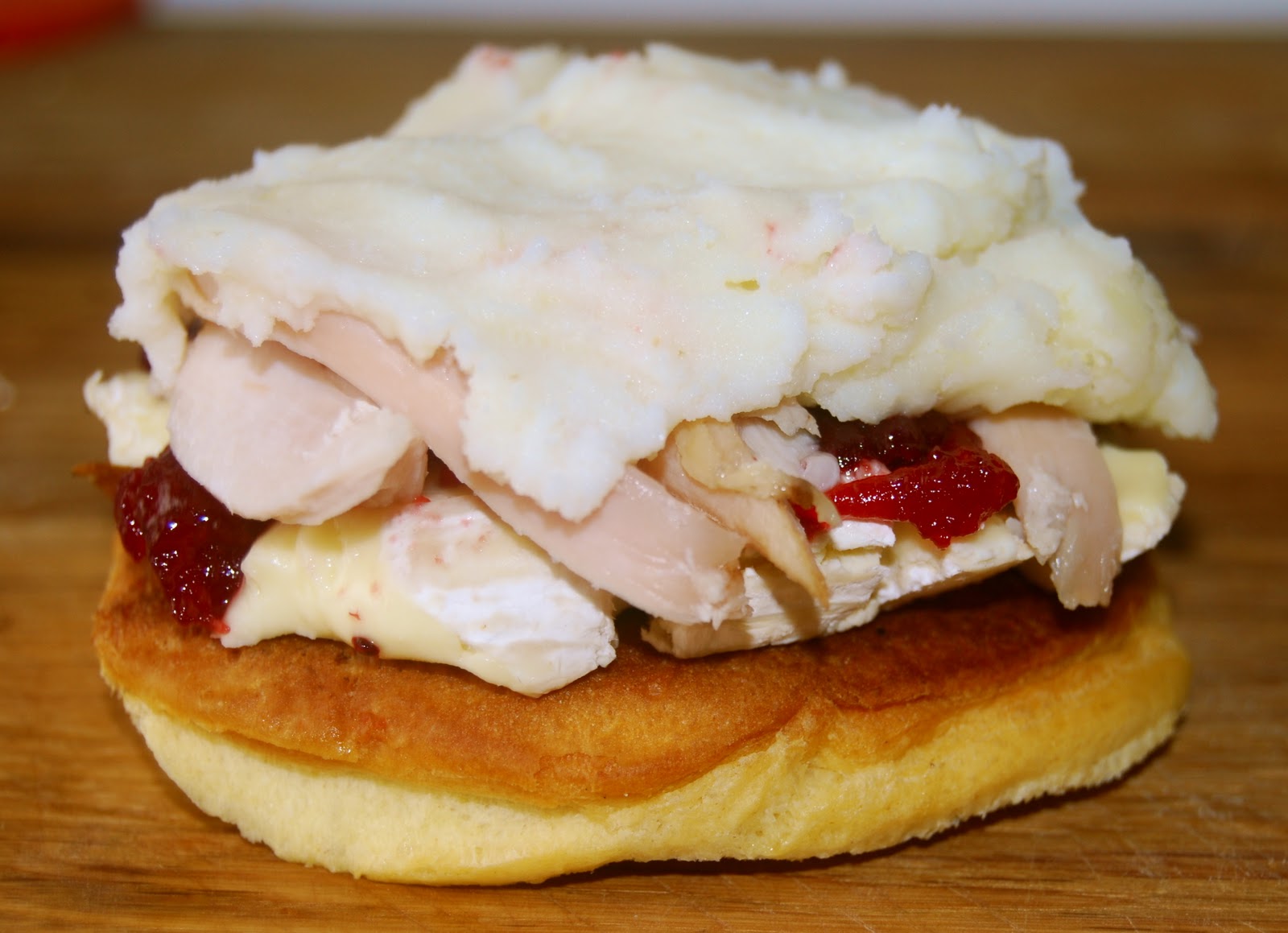 Now for the stuffin’. My friend Pete made this and he did a hell of a job. 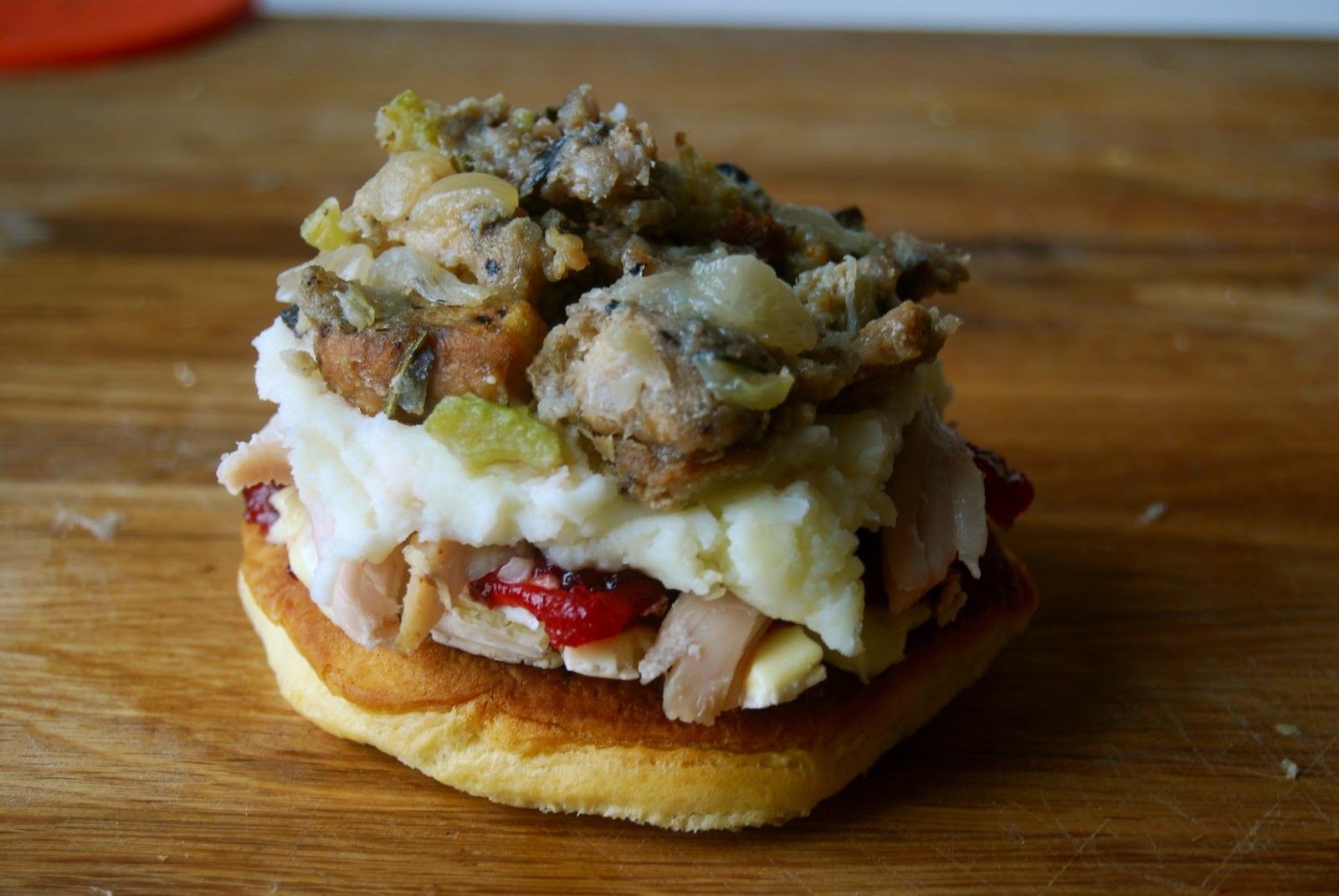 Once it’s built go ahead and put on the other piece of bread.

But don’t let me stop ya, feel free to add way more goodness to the sandwich if you’ve got any. 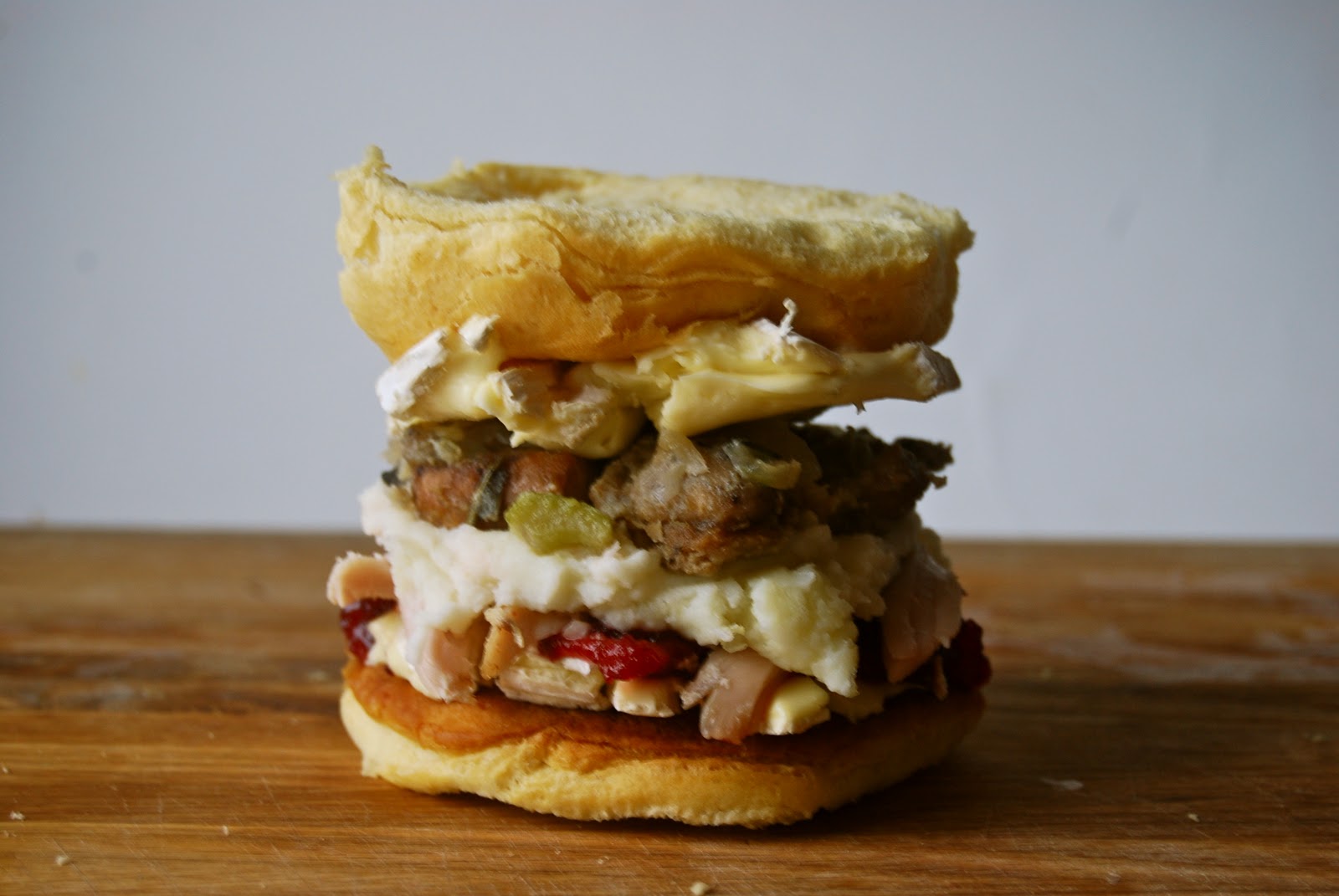 Because this is so tall you’ll want to melt a pad of butter in the skillet and place the sandwich inside.

To get this sandwich to perfection you’ll want to put the heat on medium and cook it for about 2-3 minutes on each side. 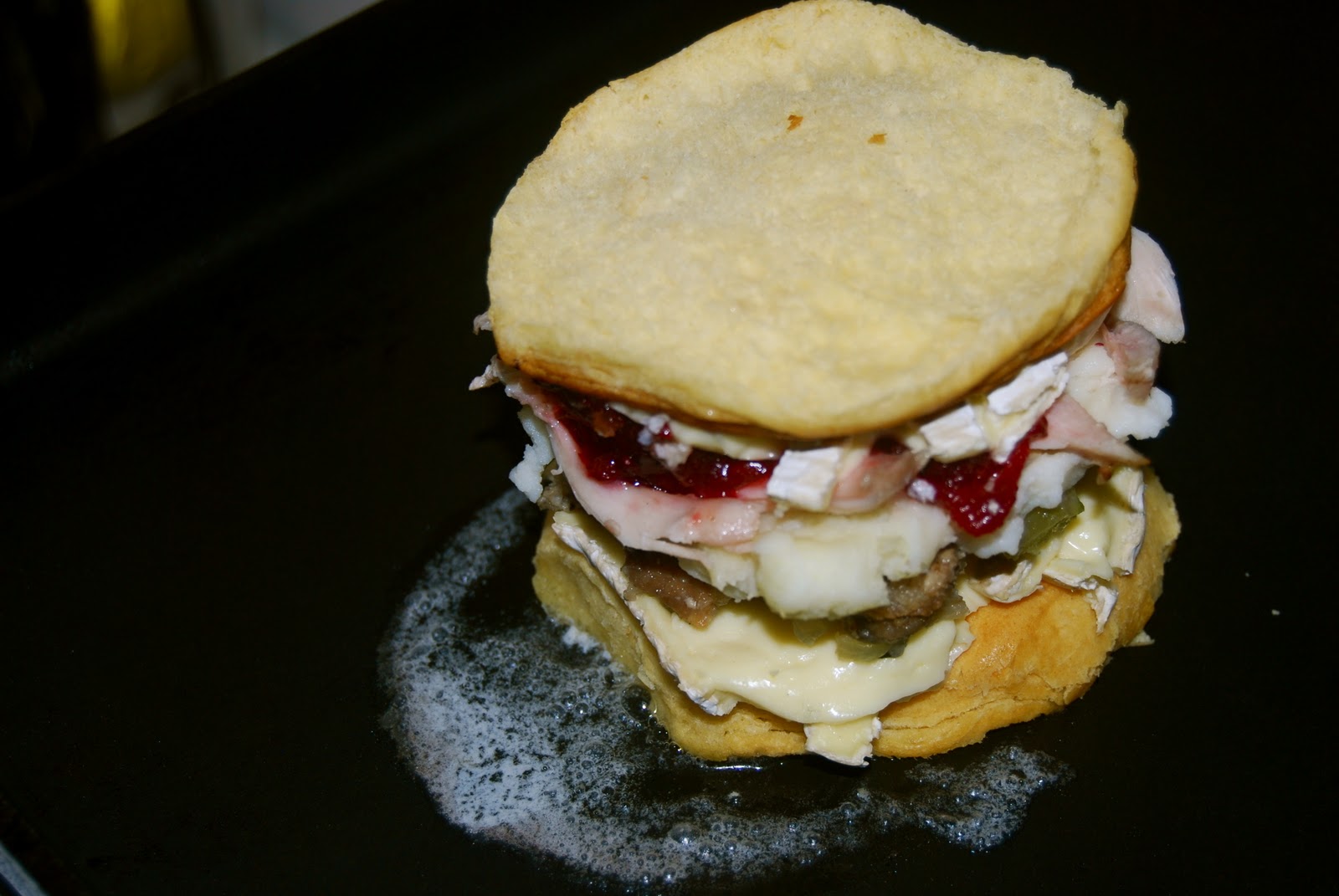 After a few minutes of browning, flip the sandwich.

Don’t be scared though, this sandwich actually flips really easily because there’s so many “glue-like” ingredients. 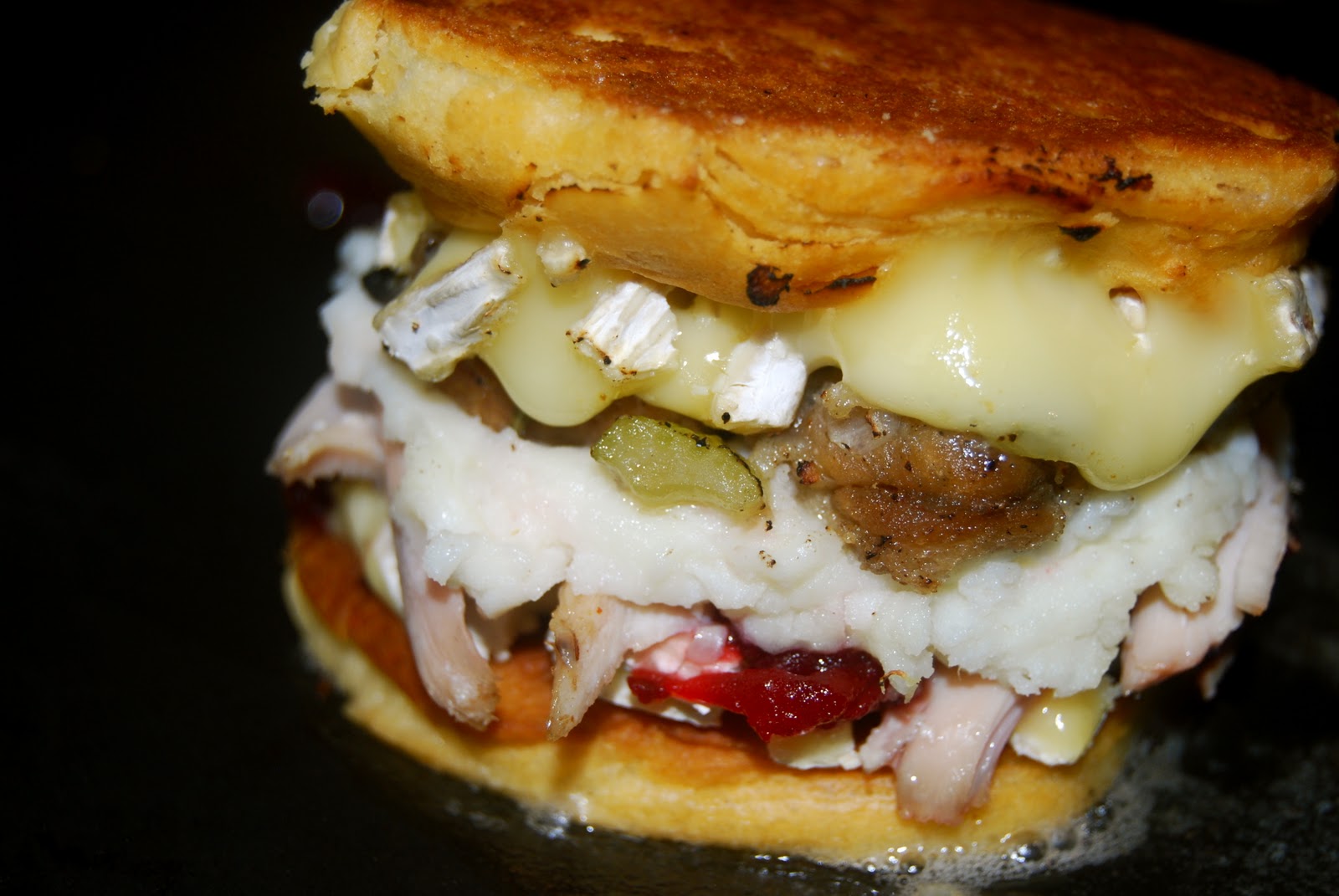 When it’s equally golden on both sides, take it off the stove-top and pour your gravy on top. 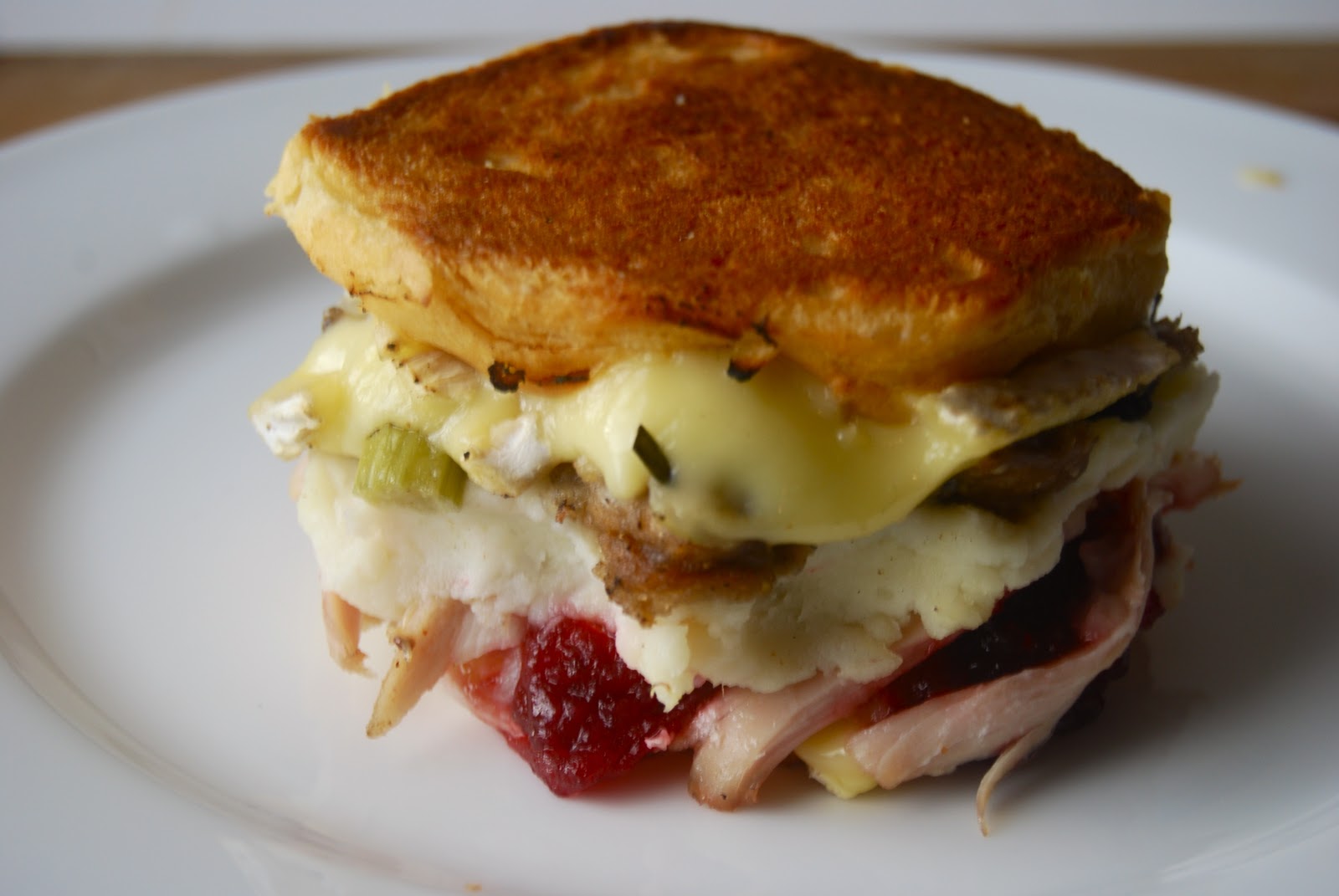 Watch in amazement as the gravy fills the nooks and crannies of the biscuit. Repeat if necessary.

One last thing, this is definitely not a grilled cheese that you’ll want to eat with your hands.  Try a knife and a fork and you should be good to go! 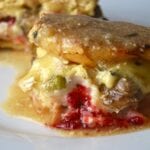 This Thanksgiving leftover grilled cheese may not be pretty, but it sure is delicious! Imagine a stuffed biscuit filled with all the leftovers and then smothered in gravy. It's heavenly!