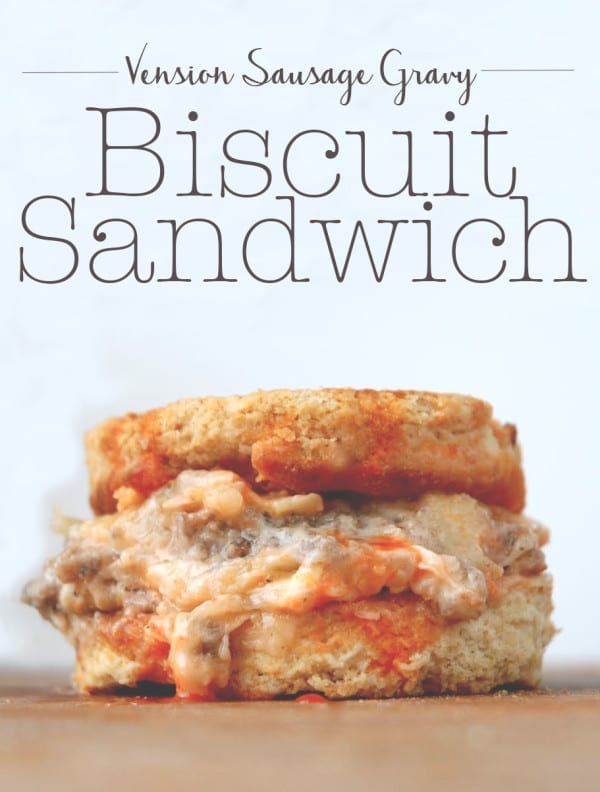 One of the greatest parts about working from home is that I never have to change out of my sweatpants AND I get to wake up whenever I want…kind of. This probably makes me sound like a slob, but when it’s like 10 degrees outside, what else is a FL girl supposed to do? I definitely don’t want to wear skinny jeans while I’m sitting on my couch, endlessly tweeting for hours at time… I mean I can barely stand wear my fav Levis when I go out at night. And even though sweat-life sounds great and is super comfy in the moment, not getting out of my battered grey pants starts to take a toll on me… especially when your roommates get home and you’re still in the exact same spot in the exact same clothes as when they left. I don’t think they’re judging me or anything like that but it makes me start to think that I should maybe get dressed and work in a coffee shop or a place that has actual human interactions.

So since I’ve been feeling kind of guilty about not acting like a real person, I did something that I never thought I’d do. The other day my bestie, Jess, sent me a password-protected invite for some event called DAYBREAKER that started at 7:30am. Like any rational human who’s obsessed with sleeping, I thought this was a typo. Turns out, it wasn’t. Like at all. Some crazy young burners were throwing a pre-work dance party to get like-minded start-up kids pumped up for their day – without booze… Crazy, right? I know it sounds nuts, but I thought it was a genius idea so I signed up.

Yesterday morning happened to be the big day so I woke up at 6am (OMG can you believe it?), threw my sweatpants in the fire (jkjk) and got dressed for a super early dance party. I had no idea what to expect but when I finally got to the location, which was a basement under a Union Square diner in the city, I knew I was in for an experience. Sean Glass, a critially acclaimed DJ, was pumpin the jams, hot coffee and fresh juices were flowing, and like any good burning man transplant party there were lit-up jellyfish floating around to make it trippy as ever. And after chugging a few cups of coffee and giving the “awake” people an envious stink eye for a good 30 minutes, I finally had enough energy to get off the couch and bop around.
As the music got louder and I got sweatier, I realized that I was not only completely awake by 8am but I was also super hyped up and in the best mood EVER. It was awesome. When the party was over at 9am, I walked outside to fresh snow gently falling from the sky with two of my besties; we all had the biggest smiles on our faces. We were basically dripping good vibes and to my surprise this hyped up mentality lasted throughout the day. It was so inspiring and downright awesome. There is one thing that could have made the pre-work dance party even better though – FOOD! Maybe it’s just because I’m obsessed with eating, but I would have loved it even more if there were something to nibble on. But there wasn’t so I went home and ate one of these breakfast grilled cheese before starting my work for the day. The Davy Crockett features fresh baked biscuits with venison sausage gravy, Wisconsin’s pepper jack cheese and my fav hot sauce from A&B Condiments. 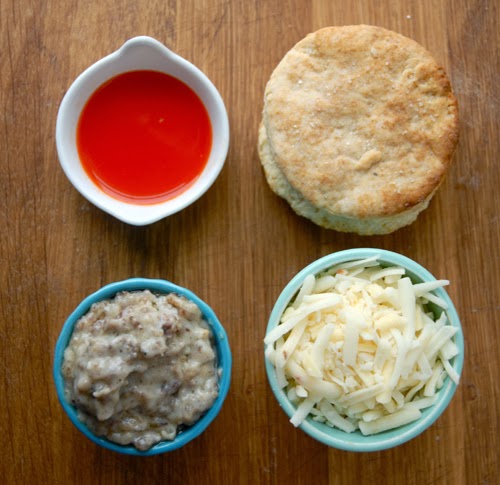 JUST WANT THE RECIPE? CLICK HERE TO VISIT MY ABOUT.COM SANDWICH EXPERT PAGE FOR THE PRINT OUT.

To begin,  grab a biscuit and gently rip it in half. You’ll want to use the exterior of the biscuit as the interior of the sandwich – that way you can grill the bread-y part and get it all crispy without burning.

If you don’t know how to make biscuits, I’d recommend using Smitten Kitchen’s recipe [HERE]. As long as you follow the directons in the correct order, these biscuits are pretty much fool-proof… and they’re just like the biscuits that my Meme taught me how to make. I love them. 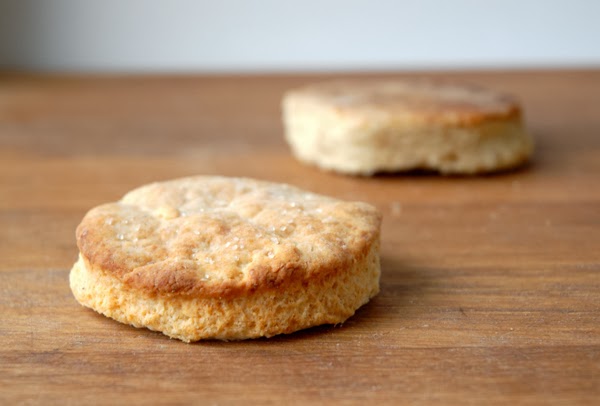 K, so once your biscuits are flipped inside out, put a hefty amount of Jack Cheese on there.

I always use cheese sourced from Wisconsin because I think that they’re the absolute best. And its readily accessible all around the country which is great, especially if you don’t live in a place that has a ton of artisan cheese shops. 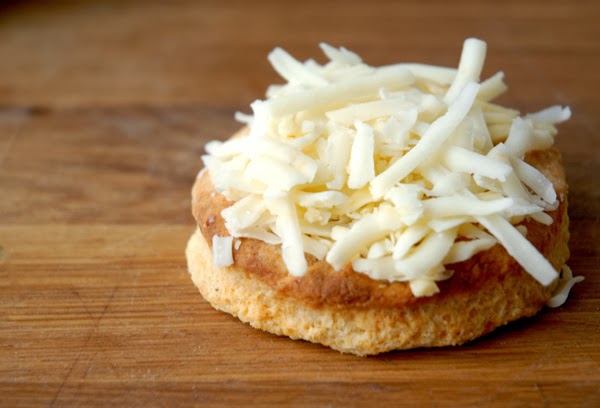 Next, add a spoonful of venison sausage gravy. Since you probably have no idea how to make this or where to get it, so I’ll break it down super easy for ya!

Basically you just need to source some venison sausage and then break it out of its casing. In a cast iron skillet, brown it until the sausage is cooked through, then add two tbsp of flour and cook for a few minutes – basically binding the remaining fat with the flour to create a roux. After about 2 minutes of cooking the flour-fat mixture down, you’ll want to add in milk – More or less depending on what you want your sausage to gravy ratio to look like. The
n over medium heat, continue stirring until the milk thickens up and you have a beautiful gravy. Salt and pepper to taste!

That’s it! Easy and delicious! … which is my middle name… actually that sounds bad, so no, no it’s not anymore.

Oh, and once your venison sausage gravy is on there, add some hot sauce! You can’t have sausage gravy and biscuits without it (DUH!) so I used A&B Pepper Sauce because it’s made locally and I think the dudes that do it are super awesome. Oh, and did I mention it’s insanely good? I know you’ll love it, and you can totes get some [HERE]. 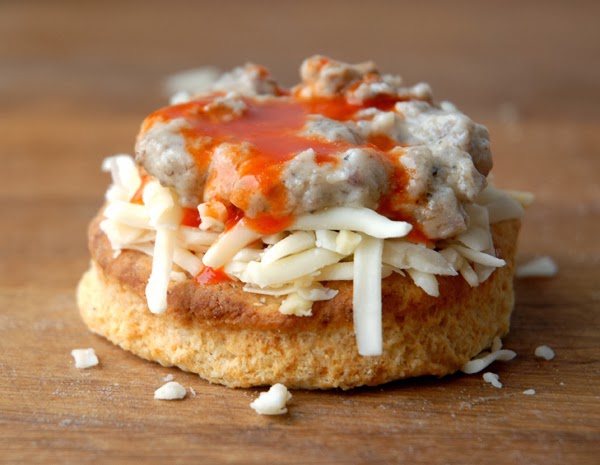 Then just add some more cheese and top with the other half of the biscuit – interior side out and smear on some butter all over it. 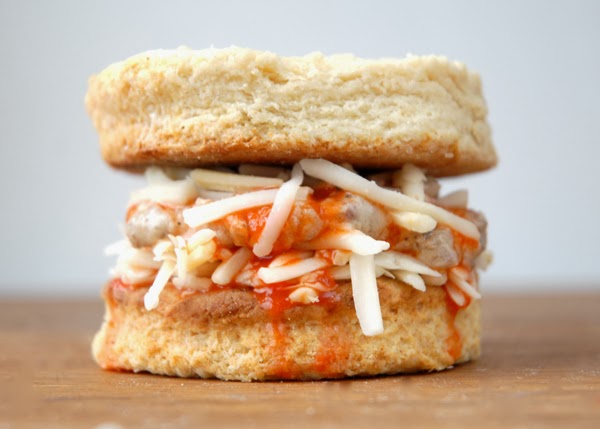 This picture is fucking gross so you can totally ignore it… I have no idea what happened when I was trying to capture this – but this is the part where you just cook it over medium until it gets a nice grilled cheese crusty crust. You know the whole, butter, grill, flip, and repeat thing.

Let’s move on and never think about this picture ever again. 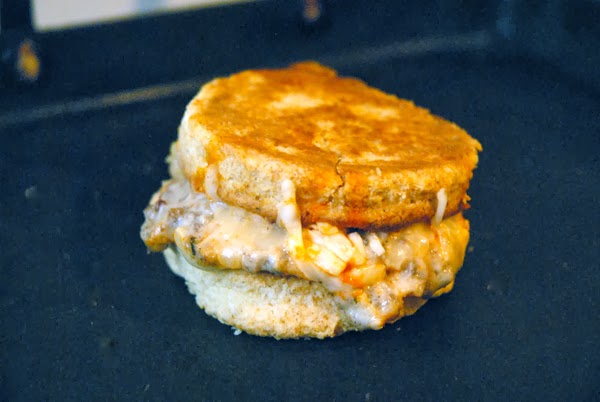 After a few minutes on each side, the cheese should be melted and the biscuit should have a nice pan fried crust! 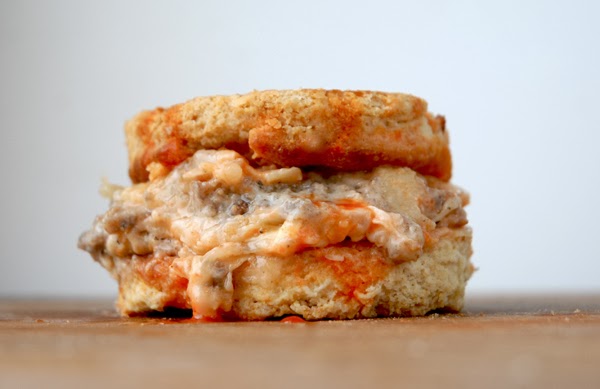 Did you ever think that you could have handheld biscuits and gravy?! ME NEITHER! So there’s two new discoveries this week: 1. What I just said. and 2. Pre-work dance parties are probably the best way to get your day going EVER. Oh, and I guess there’s a 3rd which is that you don’t have to be in middle school to have a dance party without booze… which is pretty freaking cool.
xoxo,
GCS
Share
Pin
Previous Post: « The Dilly Dally – Humbolt Fog, Ricotta, Cherry Jam, Duck Egg, and Proscuitto Grilled Cheese
Next Post: The Peachy Peach – Gouda, Pickled Peaches, Mulberry Jam and Virginia Ham Grilled Cheese »