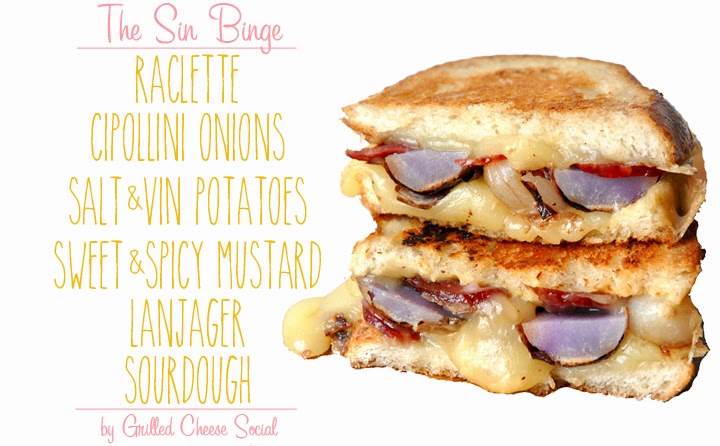 I think it’s totally legit to say that everyone goes through a rebellious period. Mine might’ve lasted a little longer than the average Joesaphine, but that’s cool – it’s always been something that I’ve worn on my sleeve. Unlike most people who think of a rebellious phase as trouble, I’ve always thought about it as a some awesome gift from the universe, like a spiked shirley temple or a scruffy faced Ryan Gosling. This all started back in 7th grade, when I discovered that I didn’t want to be one of the Abercrombie-wearing, Hollister-stinkin’, typical middle school kids that looked like everyone else. Which, to be real, was kind of hard to deal with in central Florida but I was just always turned off by the way everyone was the same. So like any kid with a bright idea and too many hormones to function – I started to deviate from the norm.

I made friends with the skaters, the punk rockers, and the surfers because they seemed like the ones who “got it”. I started dressing like a boy – wearing baggy long shorts, ratty old tube socks, and band shirts every single day. I still miss my favorite worn out Saves The Day shirt (where did it go?!?) and the Manic Panic cotton candy pink hair. And although my Mom probably thought I was going to start smoking meth or that I was about to drop out of school to follow NOFX around, that wasn’t the case. I just wanted everyone to know that I was different and that I was going to do my own thing NO MATTER WHAT. Also, let’s be real… they were way more fun than the popular kids and getting in trouble with them was a ton of fun.

So here I am, almost ten years later, doing the same stuff; twirling my purple hair in my finger, contemplating life, all while wearing a Dead Kennedy’s shirt. A lot has changed since then (Thank god I gave up that fashion sense  but I still embrace the weirdness. It’s what it’s all about actually. Without it, I don’t think I would be here right now makin’ my own way in NYC. So like any of my stories, comes a grilled cheese that reflects it. Inspired by my newly purple hair, this grilled cheese flaunts salt’n’ vinegar blue potatoes, creamy raclette from Roth, marinated cipollini onions, thinly sliced landjager from Underground Butcher, and sweet n spicy mustard on sourdough bread.

AND the best part about today’s blog post is THE GIVEAWAY that comes with it! The awesome people from Wisconsin Cheese are going to give some lucky person an entire case full of the cheeses that I’ve used within the last month in a half – so you can make all these yummy GCs!!! Just comment below to be entered! 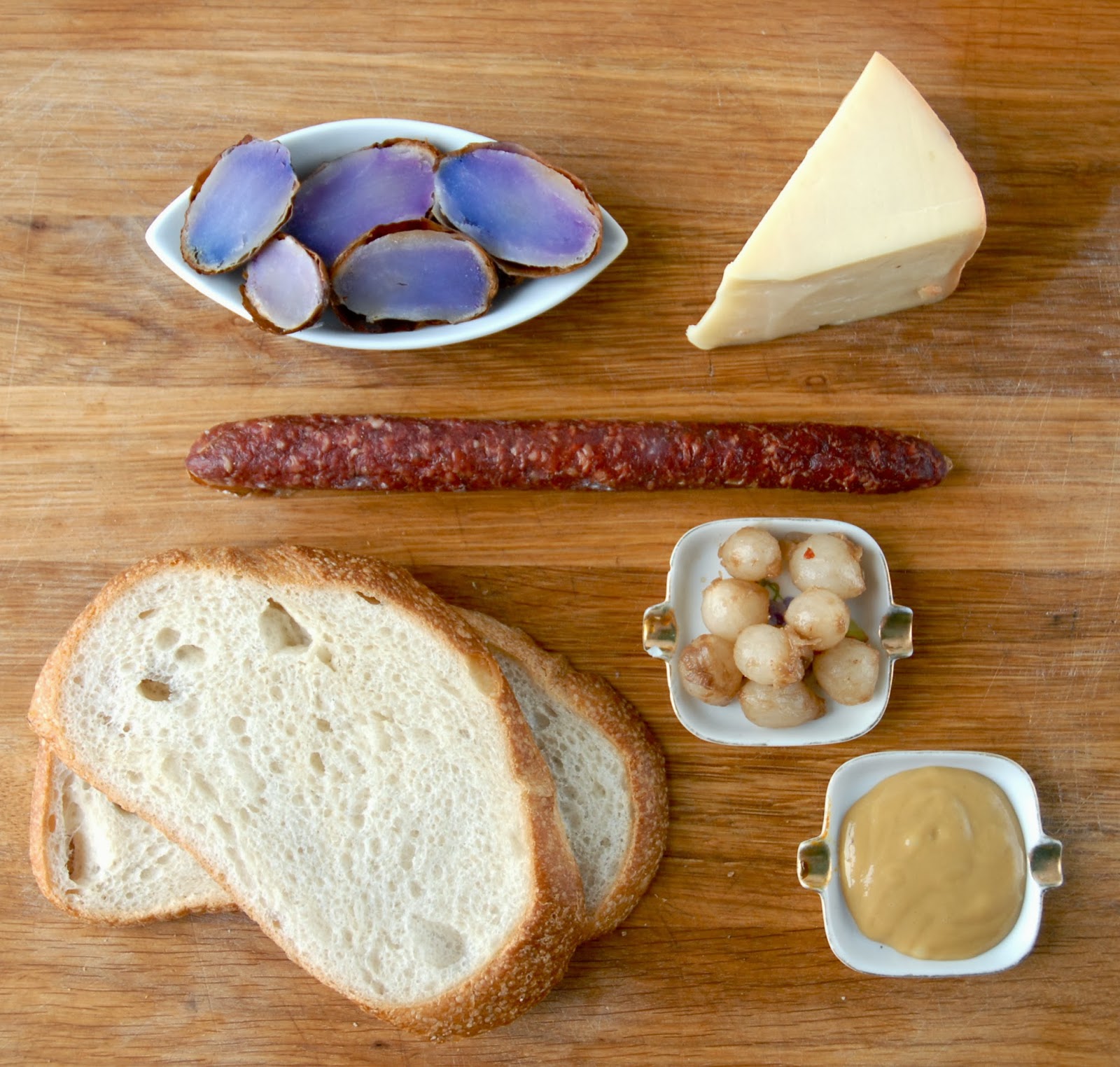 – 1 small wedge of Roth‘s raclette
– a few marinated cipollini onions
– 3 small purple potatoes, roasted
– 2 slices of sourdough
– 2 tbsp of sweet and spicy mustard
– 2 pats of salted butter
– a few thin slices of landjager, I got mine from Underground Butcher

Begin by grabbin’ some sweet n spicy mustard and slathering it on. It’s all up to your tastebuds here – customize it! 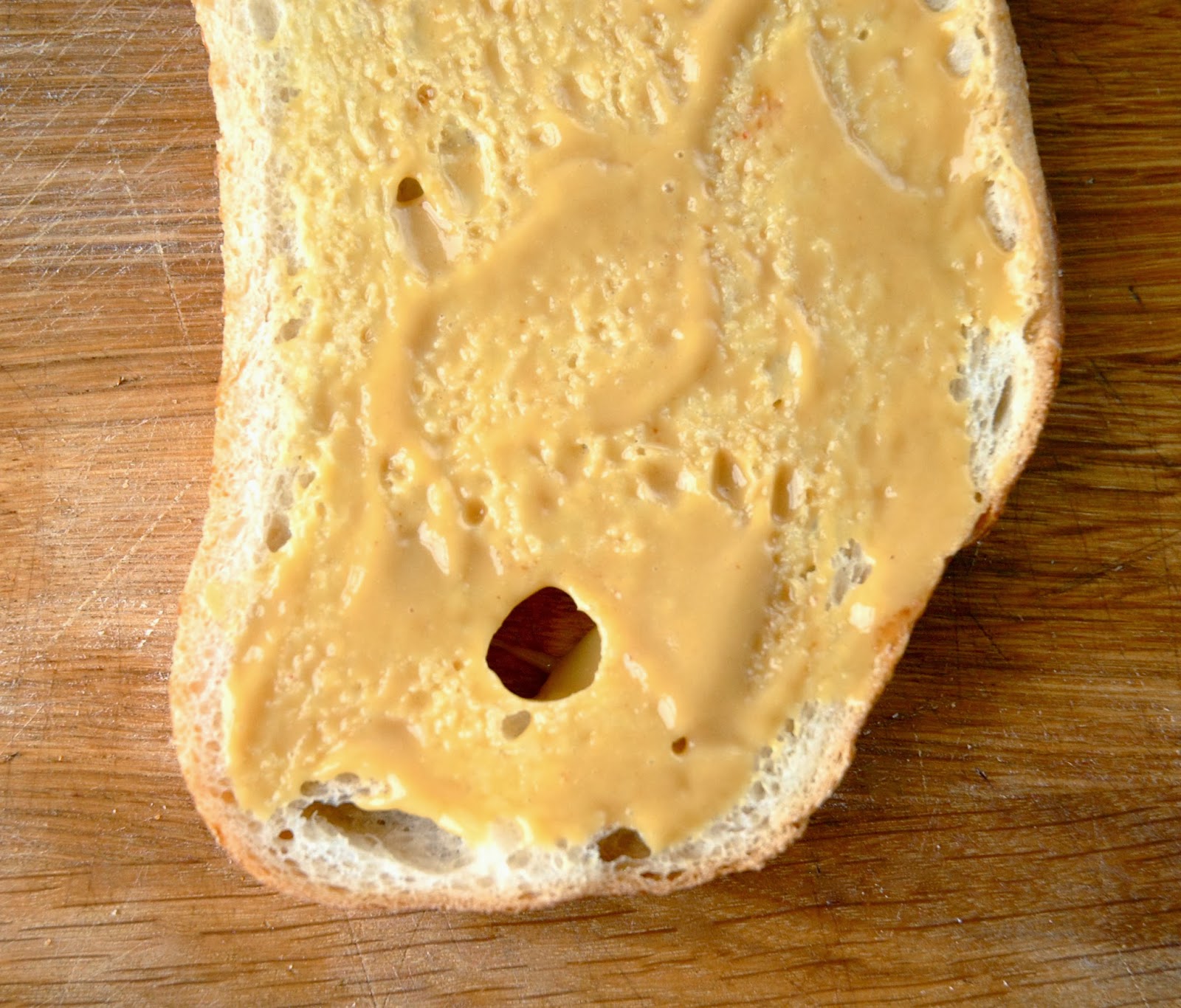 Mild, creamy, slightly stinky, nutty, and buttery, Roth’s raclette is the all-star of melty cheeses. Traditionally prepared in a tiny dish that’s heated over a flame, raclette was made to be melted and served on potatoes, pickles, and dried meats.

So as you can imagine, this sandwich is absolutely perfect. And I’m not just saying that because I made it up I’M SAYING THAT BECAUSE IT IS! 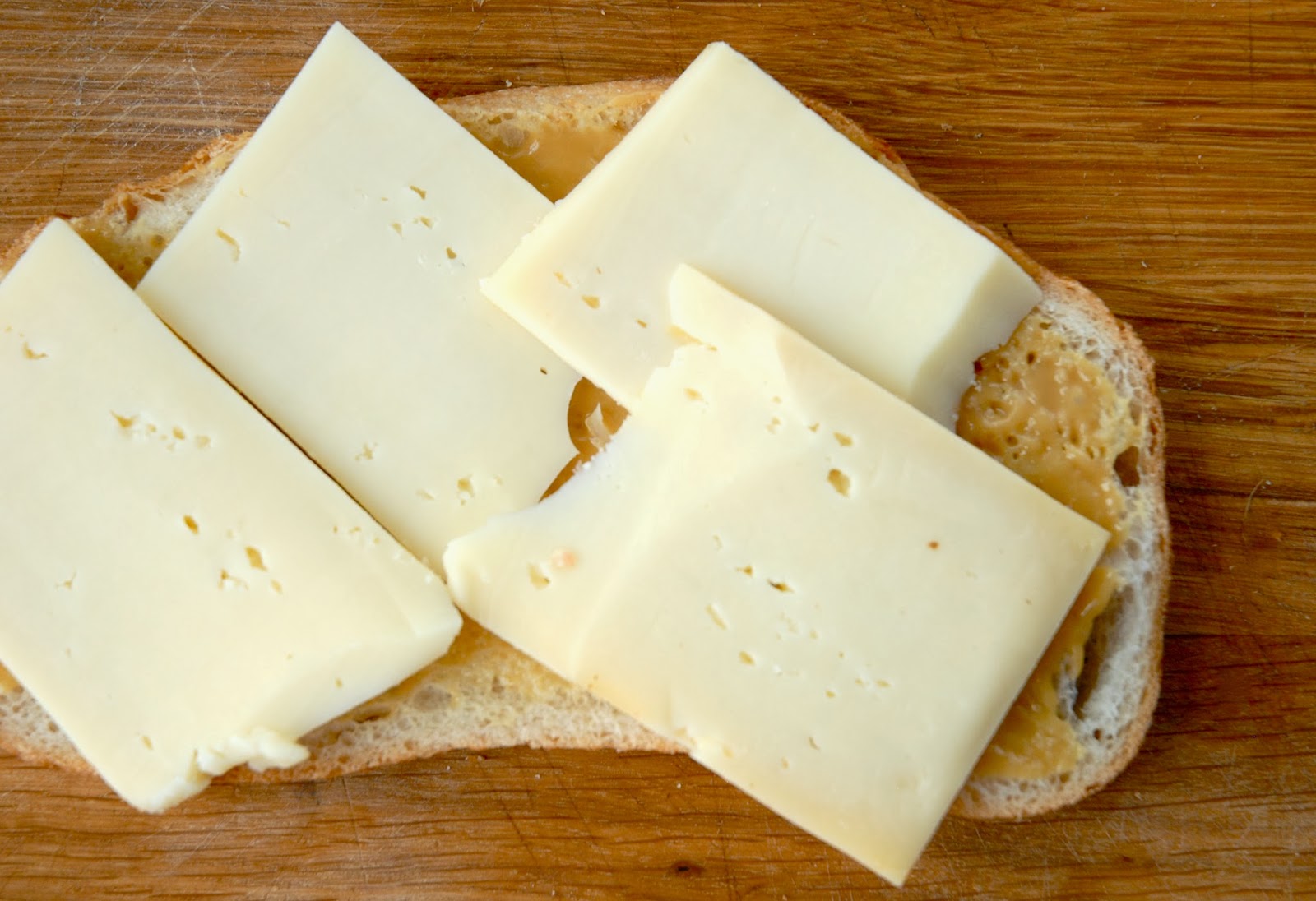 Now you’ll want to throw on your accompanying ingredients – I used roasted blue potaotes, which I finished with a splash of vinegar (get it?! salt’n’vinegar flavored!), marinated cipollini onions, and super thin slices of landjager sausage.

Never heard of landjager? Either did I until my buddies from Underground Butcher gave me some. It’s a semi-dried stick of meat that’s traditionally made from pork, beef, lard, red wine, sugar, and spices. It sort of tastes like a hard salami but only more flavorful. ALSO DONATE TO THEIR KICKSTARTER SO YOU CAN TRY SOME, TOO! 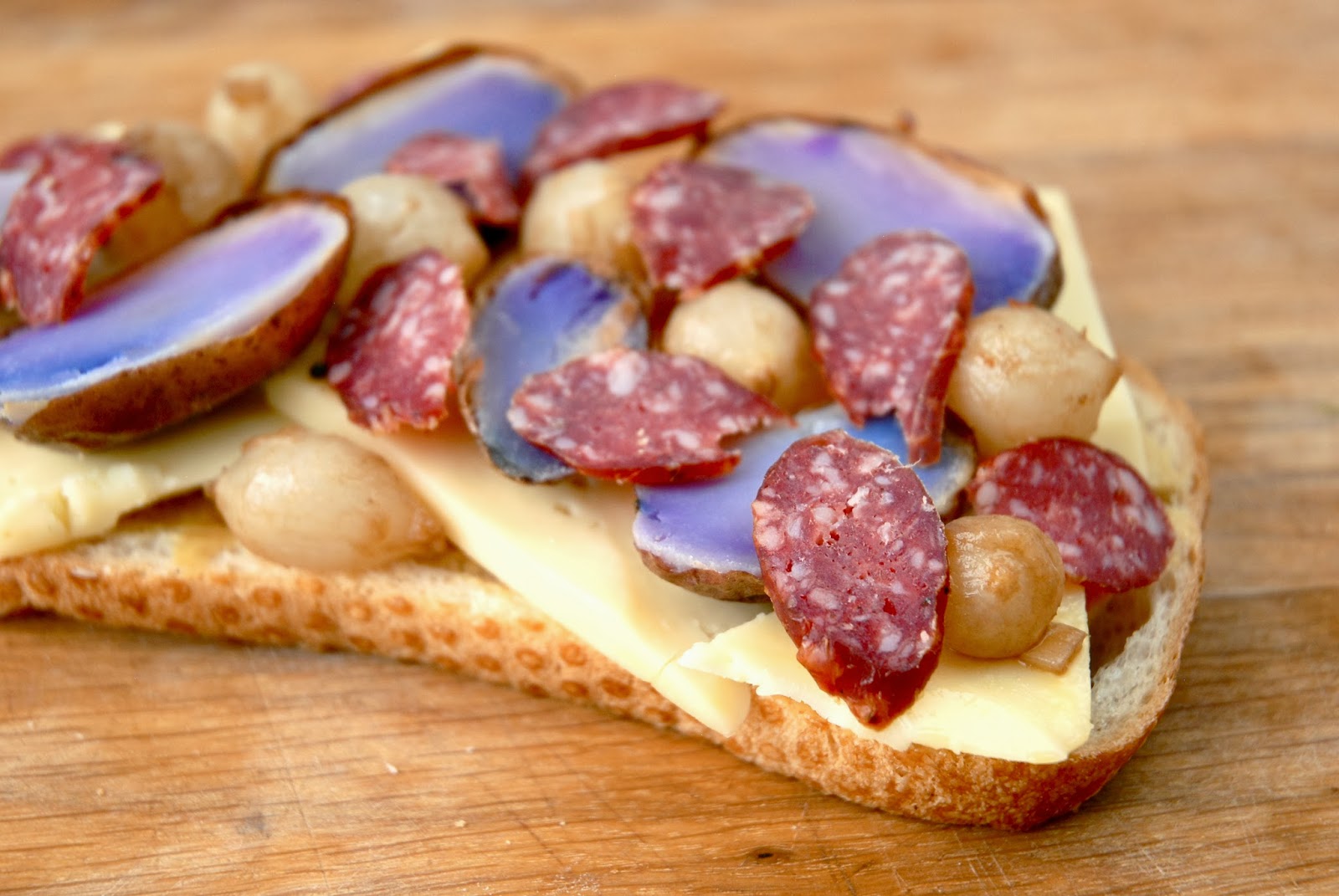 Now add some more of the cheese and place the top piece of bread on top. 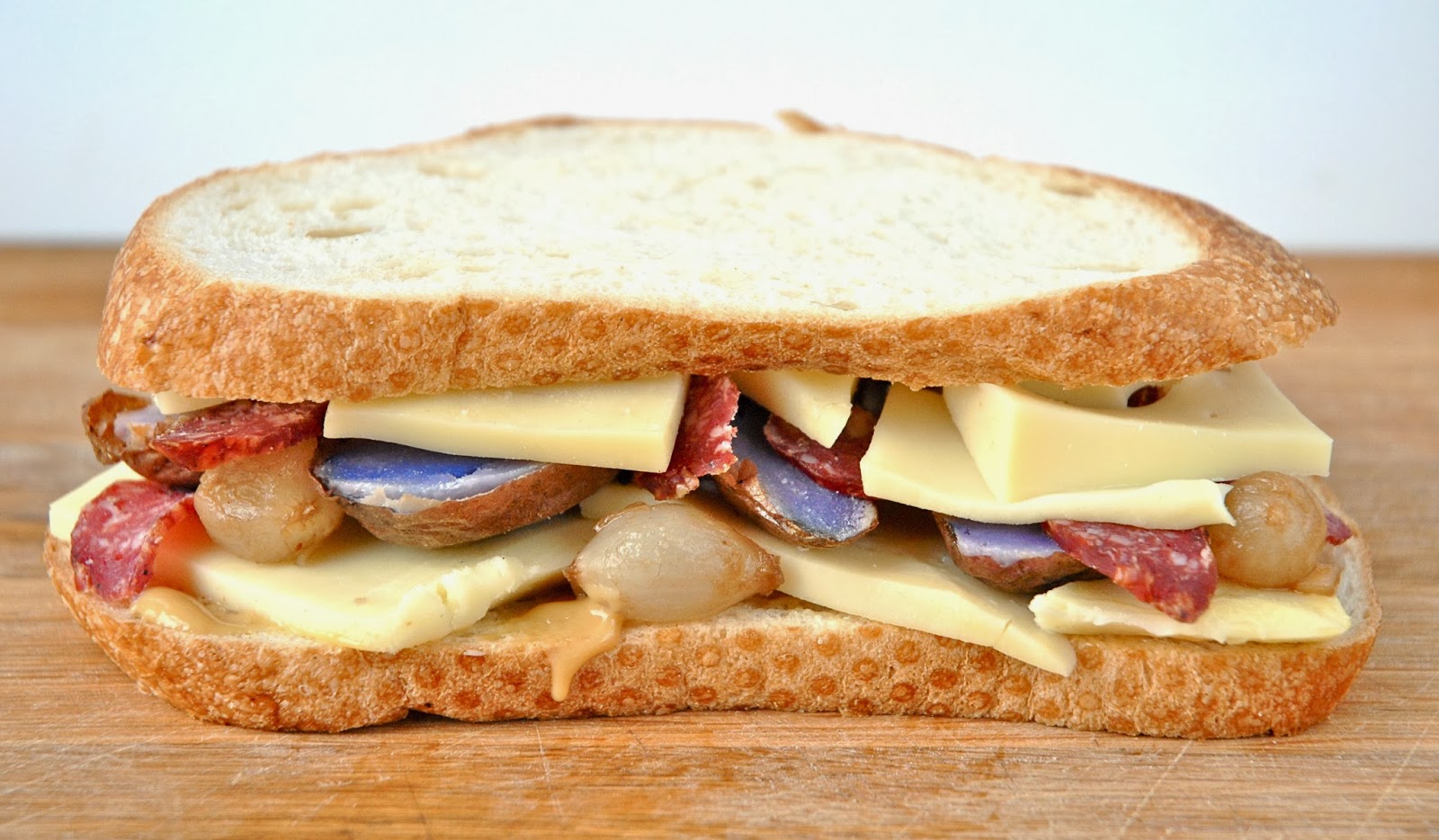 Now heat your skillet to medium, butter both sides of your sandwich, and put it on. Cook for a few minutes on each side until it gets all melty and you grow a beard just like one of those German mountain men that’s been eating this type of meal (non-grilled, of course) for ages. 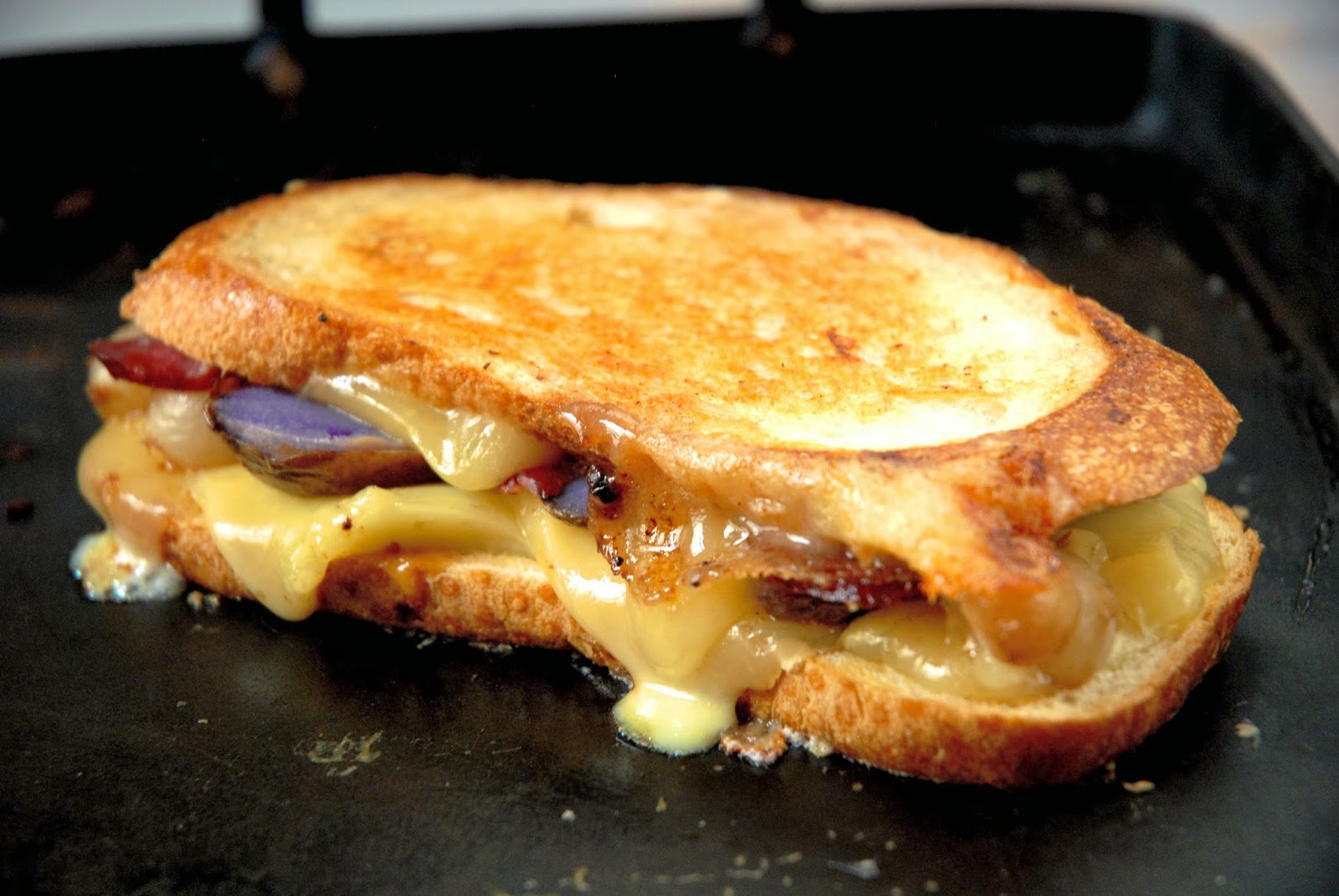 After a few minutes it will be absolutely perfect and you’ll have a hard time not shoving it down your throat – but do what my mom always tells me and hold out for a sec. Let it cool and thicken back up and then it’s good to go! 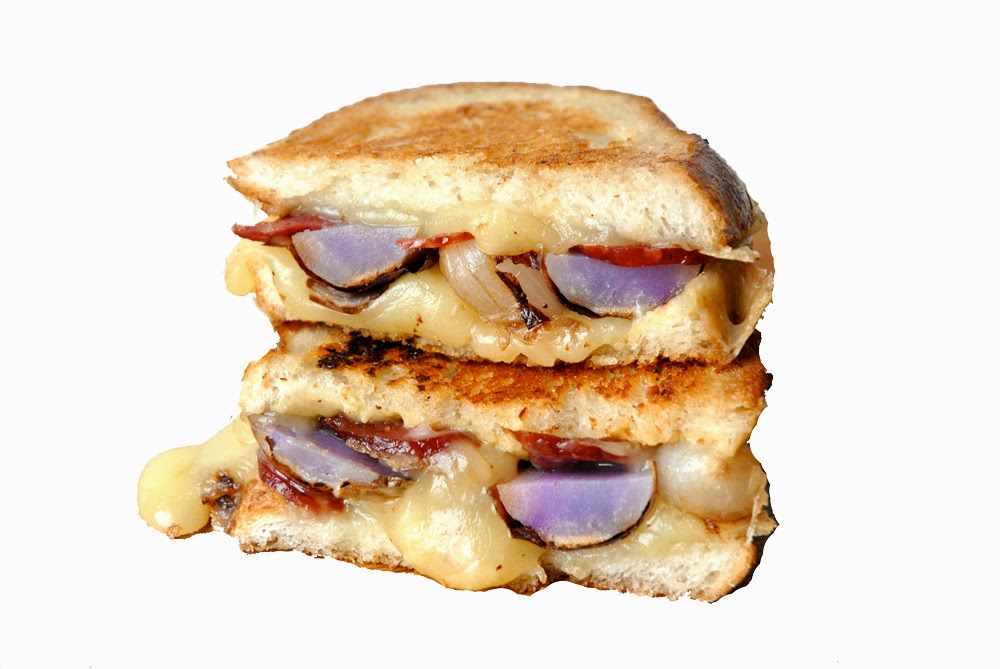 So yeah, keep it weird, keep it real, and do whatever the hell you want! Just make sure to enter the contest so that you can win a case full of awesome Wisconsin cheese!