As I'm writing this in seat 11H of flight 201 to Casablanca, I've compacted my arms as tightly as they can be to my body so much so that I'm typing like I'm a Velociraptor or something. I have absolutely no space to spread my wings and there's a flight attendent that keeps wheeling by me with a ciggarette cart (why are they selling cigs on this flight??) and she keeps sneaking up on me and hitting my funny bone - just like that scene from The Wedding Singer. The turbulance has been pretty gnarly for the last 30 minutes, and the bumpiness has me seeing double. The balding man in front of me keeps slamming his seat back so hard that the bottom of my keyboard keeps jabbing me in my stomach, which is way too uncomfortably full from pizza flavored Combos, peanut butter m&ms, and warm Coca Cola.

Yeah, I know, I'm sorry that I'm whining about how unpleasant my current situation is, but there are some fun things going on too. I'm really excited about this strange wall-mounted crib that's holding a cute little chubby baby next to me. It makes me wish they made one for people my size. I'd totally pay extra for that. The airline is also playing episodes of Friends which was really relatively cool until I plugged in my headphones and realized it was dubbed over in Arabic. I've also got a shit ton of new music on my iphone that's almost dead and I'm jamming out to some bassed out electronic music that makes me feel like I should be rolling in da club or something. I'm trying not to dance but I just can't help it, maybe that means it's time to switch over to something more chill, like that new Unknown Mortal Orchestra album or something.

In reality though, I think I might be going crazy. Why am I so antsy? Why am I so insanely itchy? Gah, it's so hot and I have a headache from squinting because I decided to buy the version of "Consider the Lobster" that has the smallest font visible to the human eye. I've got 4 more hours before we land and I am ready to get the F off of this plane. It's hot as hell up in here and everyone has warmed me not to show my shoulders and what did I wear on the plane? A stupid sleeveless shirt. I know, i know,  it's a noobie mistake but I've never been this uncomfortably hot on a plane before. I'm always freezing cold and the sleeveless shirt was meant to hide under my over-sized cardigan that I never thought I'd have to take off. I am anxious in ALL THE WAYS. Especially about traveling to Morocco....alone.

But enough griping, I'm truly so excited about this trip and if you want to follow me and see my adventures you can find me on Instagram @grilledcheesesocial. I'm also excited to share this recipe with you - that is not exotic in any way, shape, or form but it is super good and a solid sandwich.  Smoked Wisconsin Swiss cheese, honey baked ham, cranberry jam, and a sweet and buttery Hawaiian roll make up this delightful GC.

Get yo'self some of dis stuff 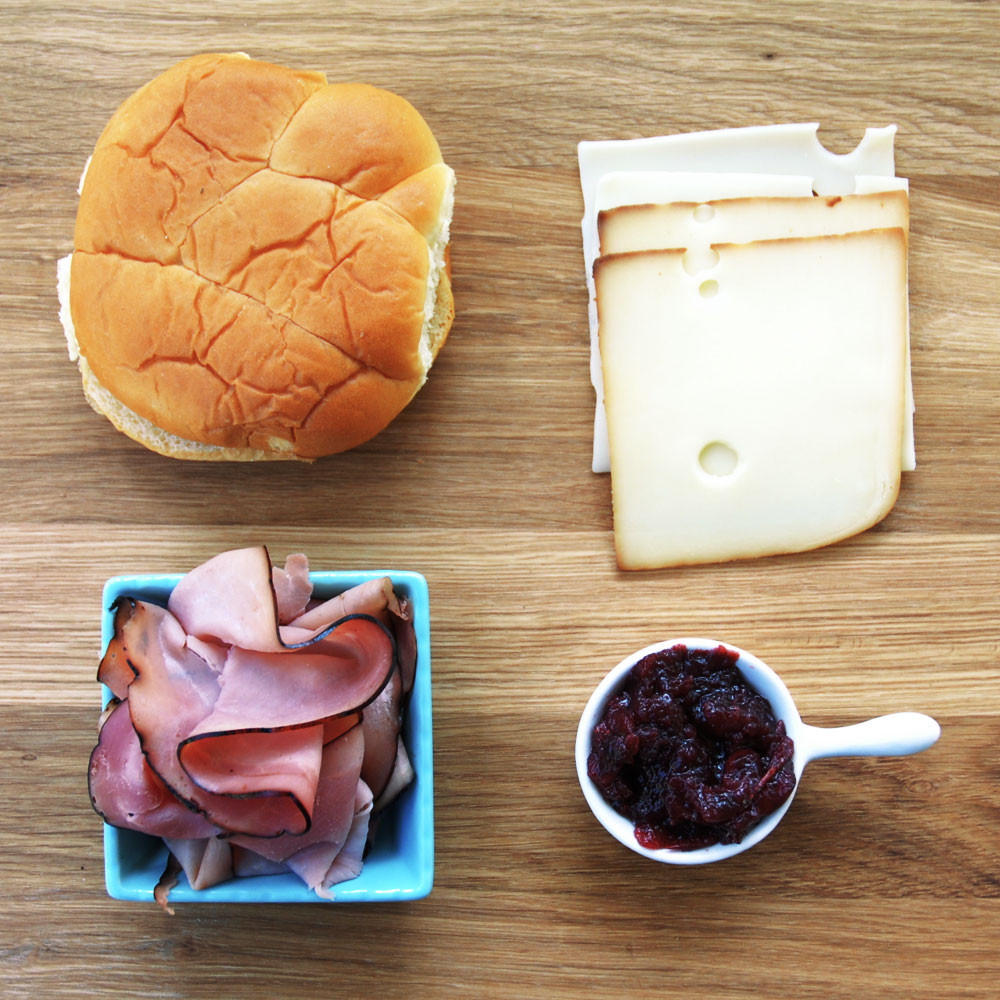 When you make a GC with any type of roll, the trick is to turn it inside out so that you're grilling the doughy center. Once you've cut the roll in half and flipped it, smear on that cranberry jam. I have something to admit, I am a HUGE fan of the canned fake cranberry jelly. Like, it's my favorite thing on a Thanksgiving table and I get really bummed out when someone makes their own version from scratch. In this sandwich however, you need the kind with the real berries because it just makes it so much more texturally appealing. 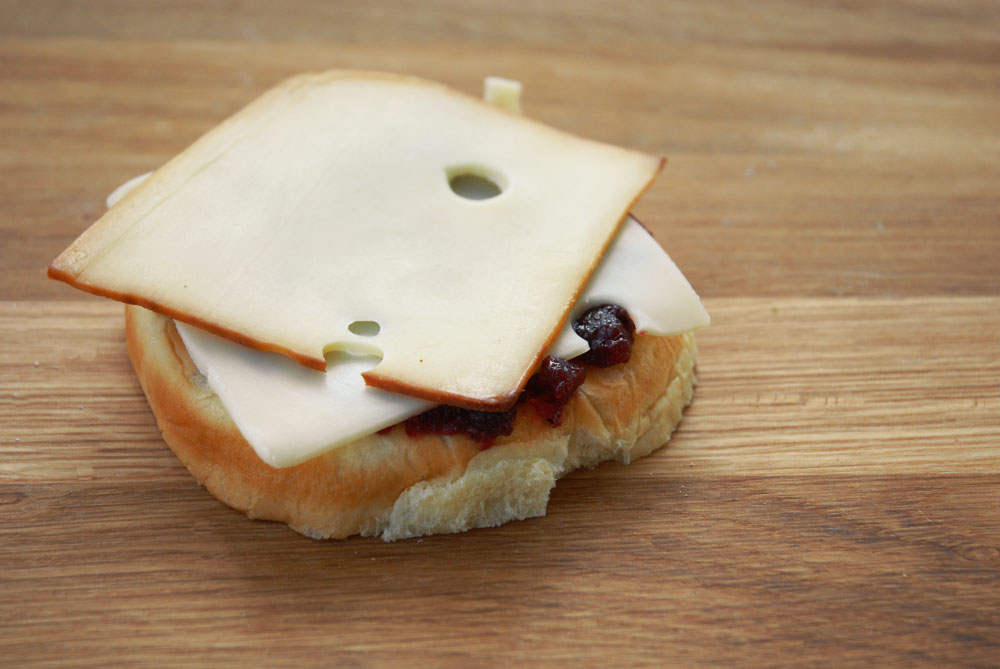 Then add some of that smoked swiss. I chose to use cheese from Wisconsin because it is my favorite and I think the Wisconsin Milk Society is an awesome group of people who know how to keep it real. The farmers and makers both care about food, and that's what matters to me... and i love them. 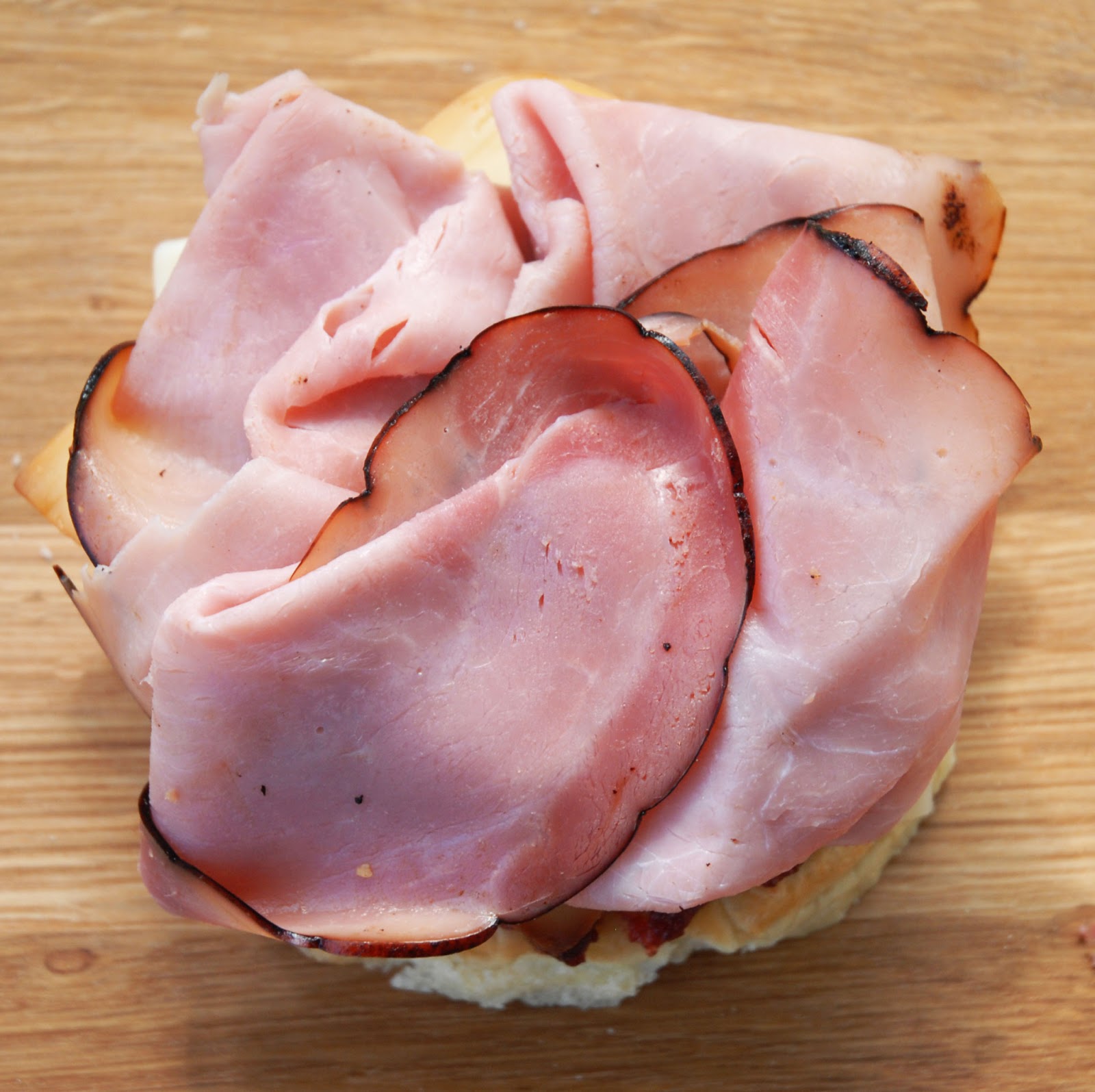 Next! Add some of that ham and layer it on pretty, just like they do in a Subway commercial. 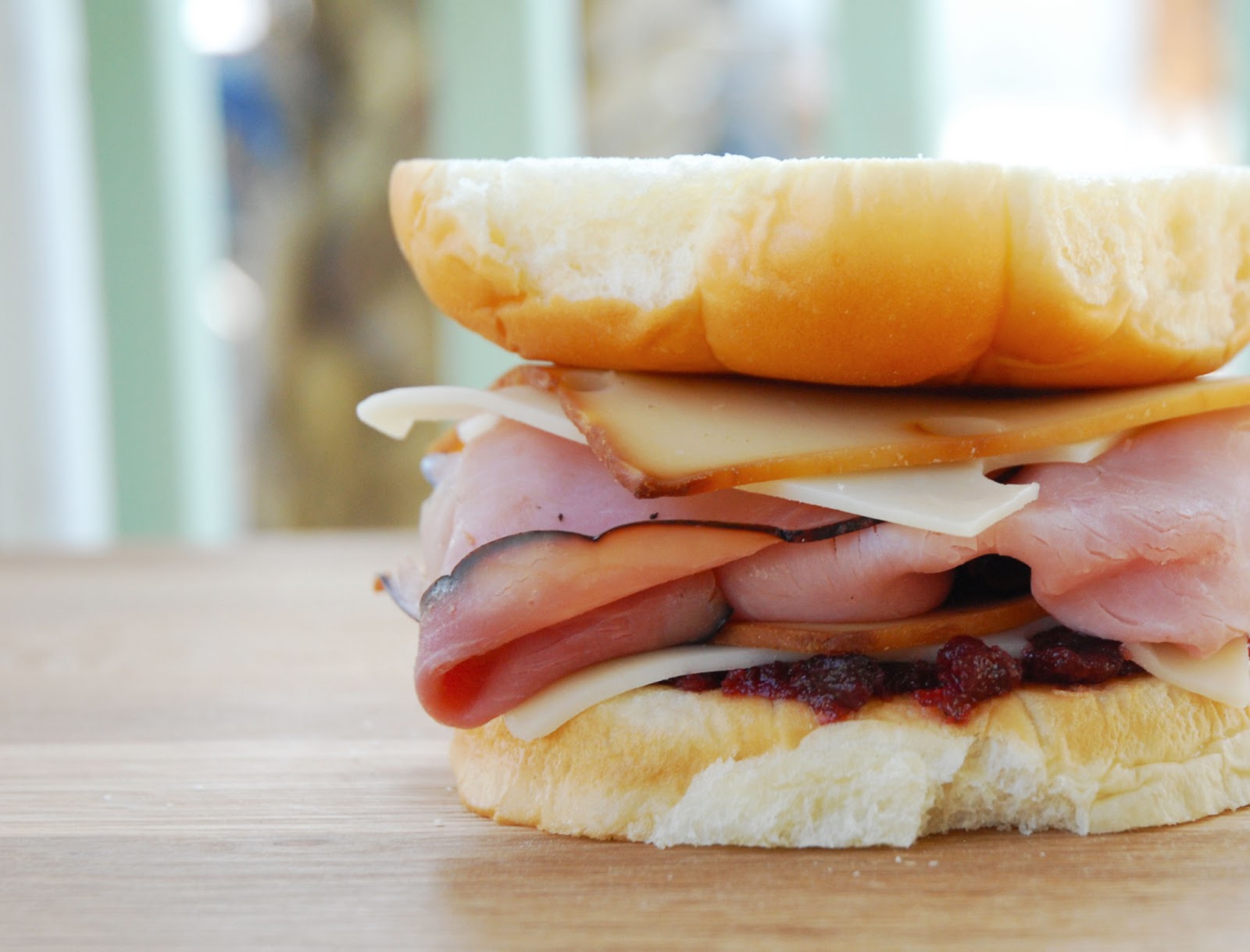 Almost done! Finish with the other slices of cheese and the remaining half of the roll and smear some butter all over that baby.

Let that butter work its magic... 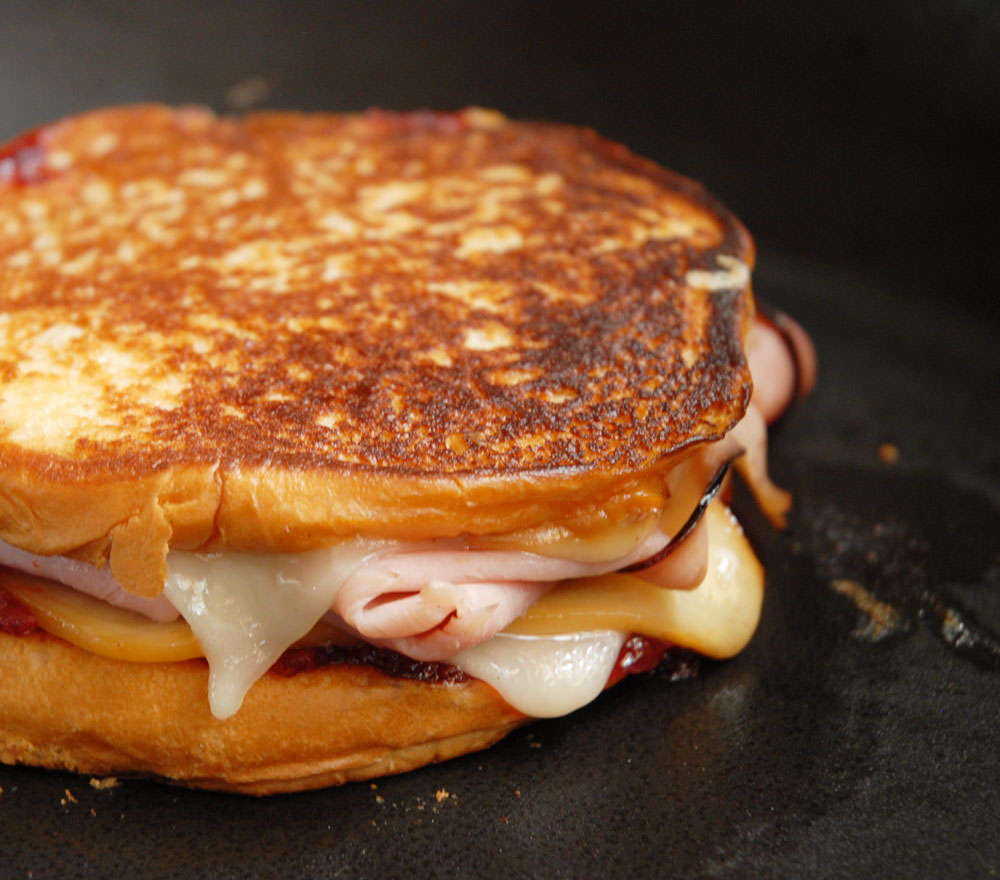 Turn your grill pan to medium and let that sandwich grill, butter side down of course. When it's all crisped up on one side and the cheese is melting over the corners, butter the otherside and flip it. Let it cook for a few more minutes until it's all perfect and melty and then remove it from the heat and let it sit for a few minutes to tighten up.

And if I ever make it off this plane and can actually post this recipe, then cheers to everyone. I didn't think I was gonna make it. I'm gonna go take a stroll around the plane now, because my left butt cheek is asleep.

UPDATE! I made it and am sitting in my hotel room in Morocco, stealing internet from the restaurant next door. I've spent two days wandering ALONE, getting lost, and being hissed at. Today, my group has finally made it and they seem like a pretty chill bunch. Even though it's been kind of scary, it's also been absolutely awesome and I'm leaving for Essaouira tomorrow! Follow me on the internetz and I'll talk to you all soon!