I've only been 26 for a few months now but I'm already starting to feel old. Not aged in the sense of realizing that I'm older than most people at the bars in Williamsburg or as a result from some looming social pressure that's telling me I should have my life together by now. But rather, old in the sense that my stupid body takes forever to get over a night of cheap tequila shots, PBRs, and awkward creative dance moves. I'm not sure if it's because 26-year-olds probably shouldn't still be partying like they're a freshman in college or that my body is actually not able to detox from the copious amounts of poison that I've been putting into it, but something has definitely changed and it's making me rethink those cheap beer shot combos.
A few years ago, my mornings were a lot different. I'd wake up, still drunk from the night before and be eagerly ready to take on the day, even with smeared mascara streaking my face. Brunches at the Metropolitan White Castle, while still in my clothes from the previous night didn't phase me. In fact, while my friends and I were busy downing mini cheeseburgers, chugging cherry coke, and categorizing our friends as either cats or dogs (think about it) I realized something very important - I come up with my best material when I'm minus a few vital brain cells. But I'm quickly realizing that I'm not so hilarious when I'm hungover these days. It's actually kind of depressing.
As I once thrived in my fuzzed out state, I now am a pathetic mess that pitifully texts my roommates "death" which translates as "puhhhlleeasseeeee may I have a bottle of Mexican coke, saltines, advil, and a hug". I'm super lucky that they usually deliver because with their help, I can usually make it out of bed by 1pm without booting. But sometimes I'm the one that receives the suffer-texts and when I get those, I go to great lengths to repay their generosity. That's how this ridiculously insane sandwich was born. That and after staying up really late and watching the Food Network's segment on the Grilled Cheese Truck's fried chicken and waffle sandwich. I think I even dreamt about it that night to be honest. 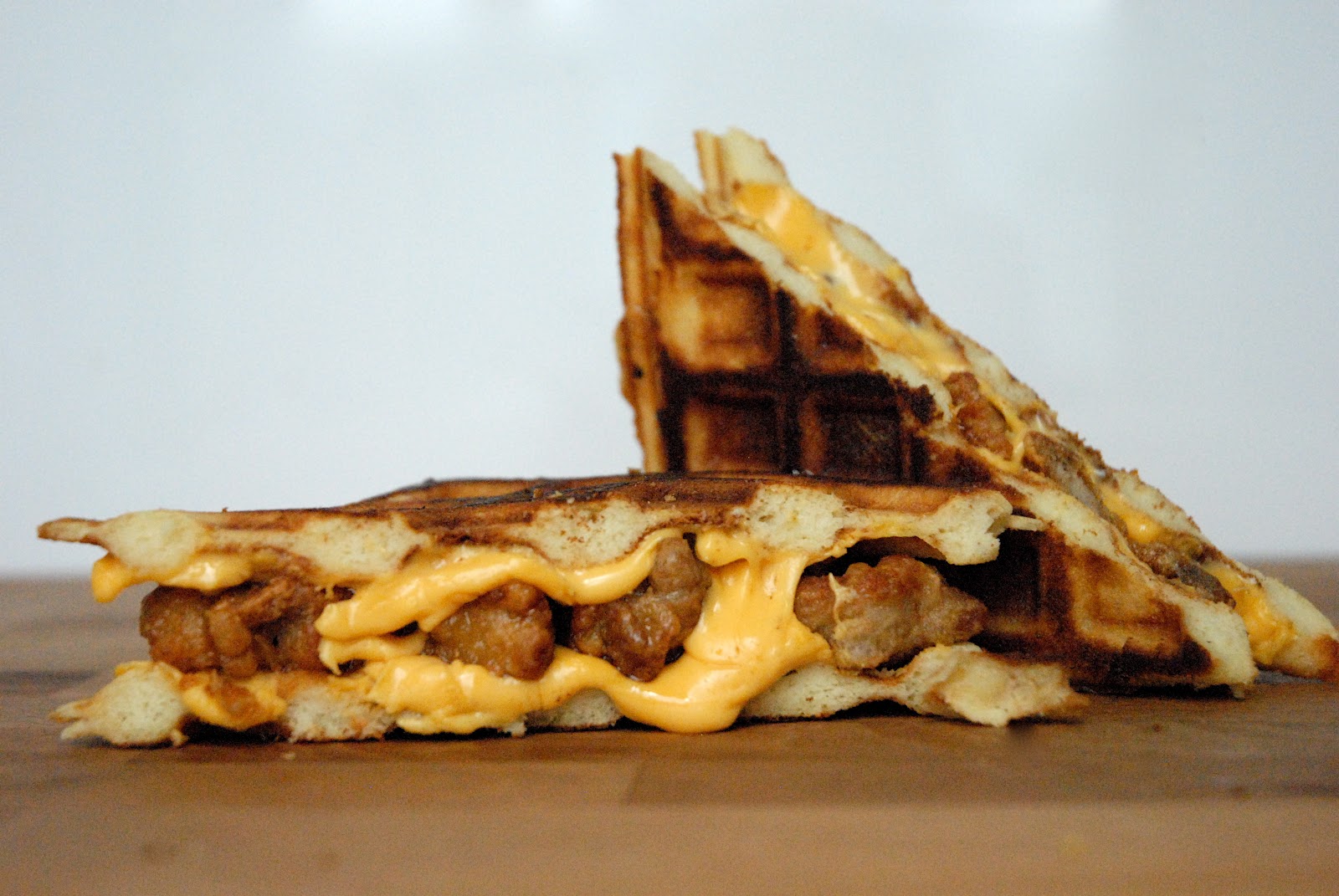 These ingredients will make you and your friends life better... 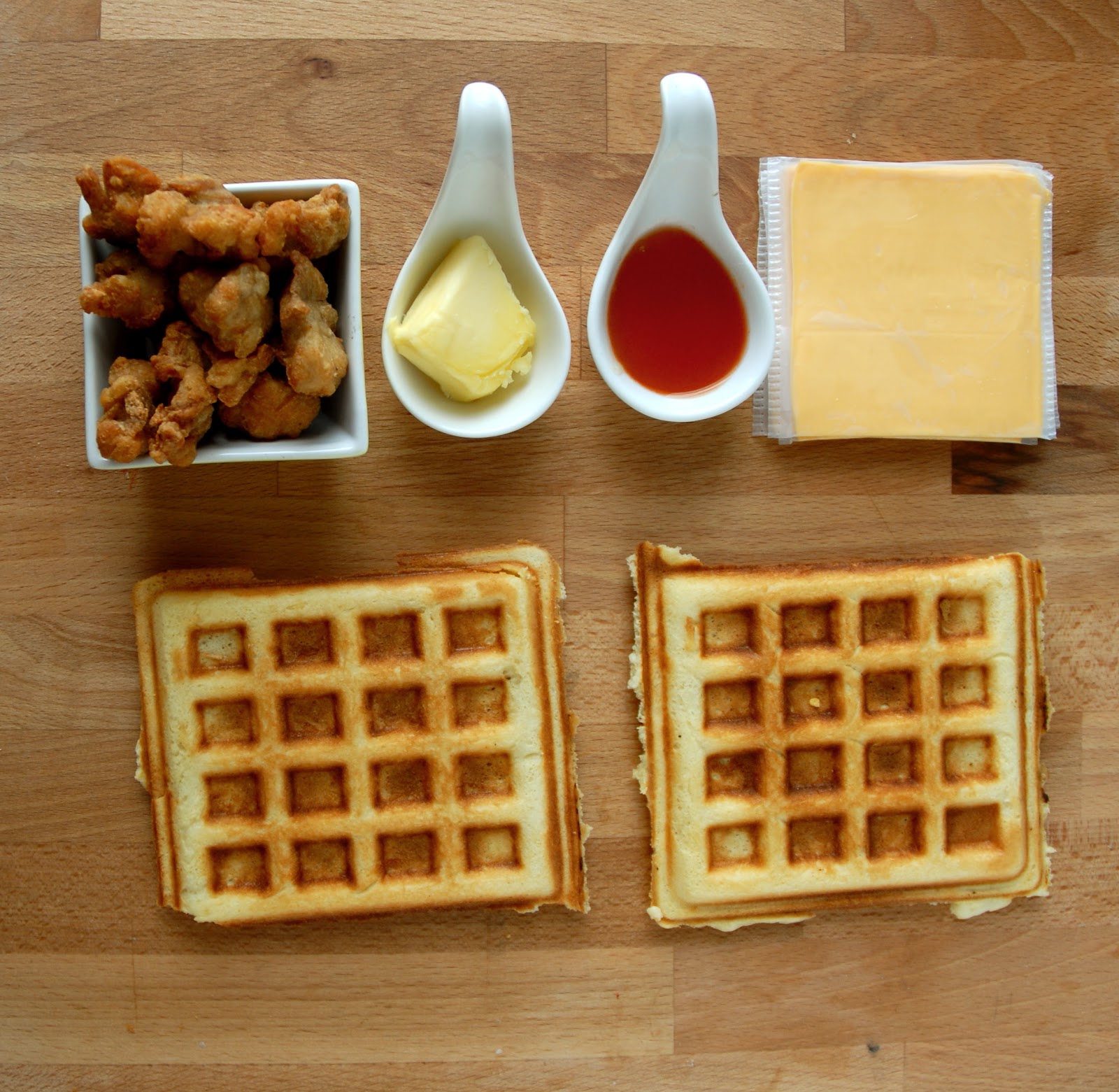 So before we begin, let me stress that it's super important that your waffles are undercooked. If they're not they'll end up burning too quickly before the cheese melts and then you'll hate life more than you already do. Trust me.

Ok, so to begin, slap two Kraft singles down onto one of the waffles. Easy, right? See, I do care about you. 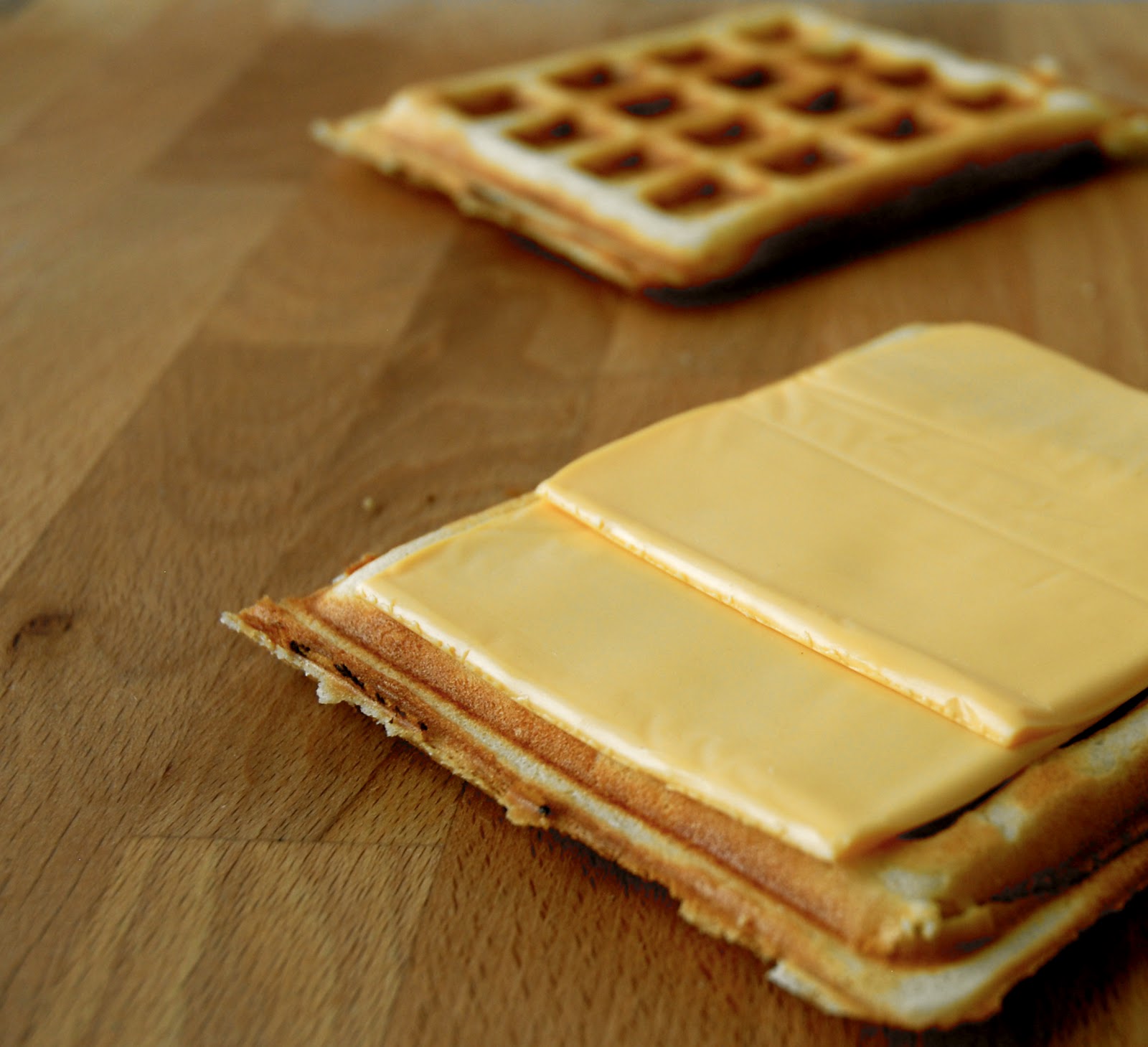 Then it's time for the life-saving ingredient - FRIED CHICKEN. I think little nuggets work best on this sandwich but you could totally just use chicken fingers or whatever you have on hand. Just don't use anything with bones on it. That sounds like an awful idea.

When it's all evenly laid out and you're about to chow down on one too many "tastes" of the fried chicken, then it's time to mix the hot sauce and honey together. This is my all time favorite condiment on fried chicken. It's so good. Sweet and spicy and oh so sticky. Smothering it on at this step helps the sandwich stay together so you can eat it when your fine motor skills aren't working so fine. 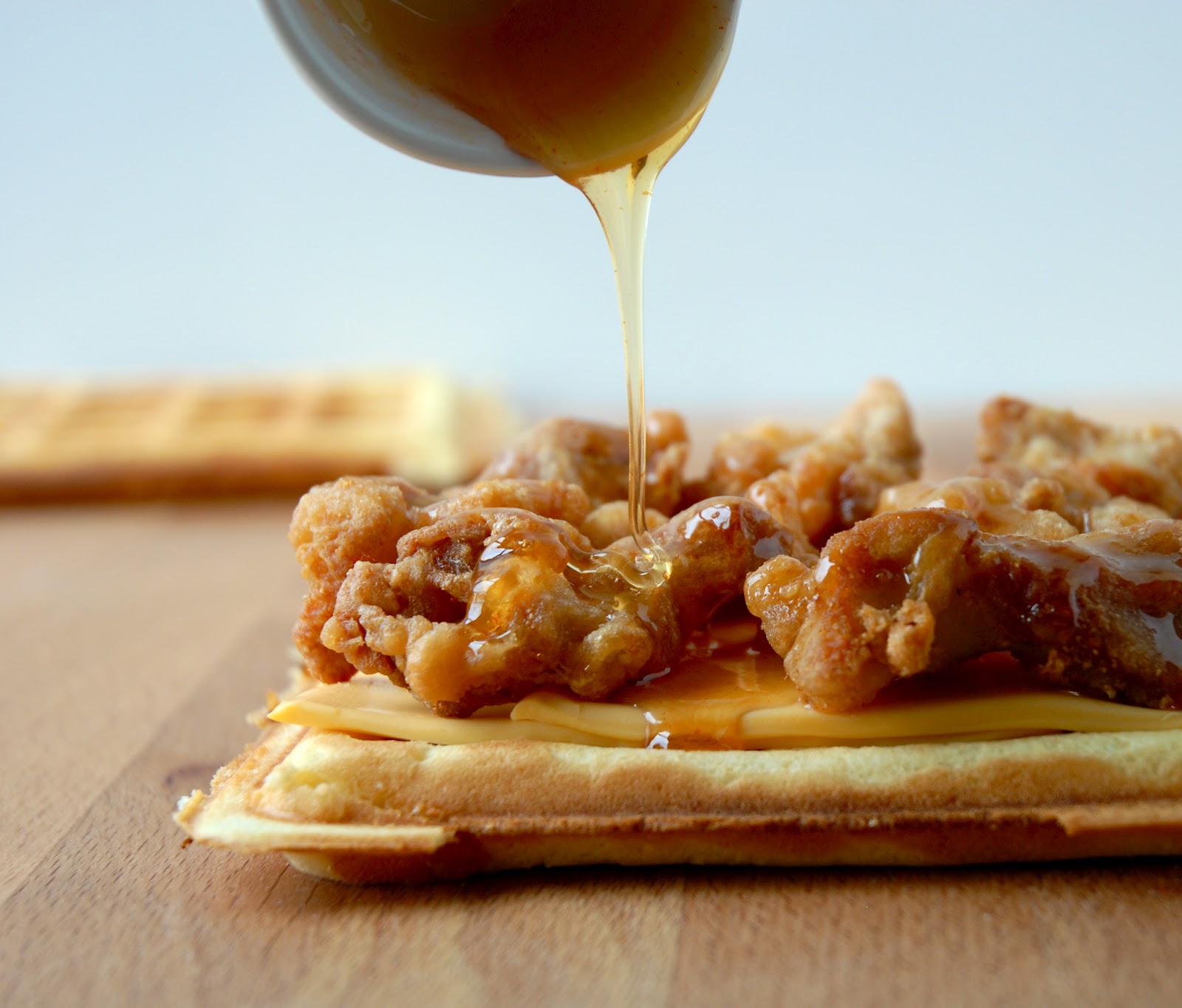 Now put the other two Kraft singles on top and you're almost done! I know some of you might be saying to yourself "Kraft Singles, WTF? That's not real cheese. What is this nut thinking?" But believe me, Kraft singles melt perfectly and for some reason their artificiality makes this sandwich even better. Actually, do preservatives soak up toxins?? 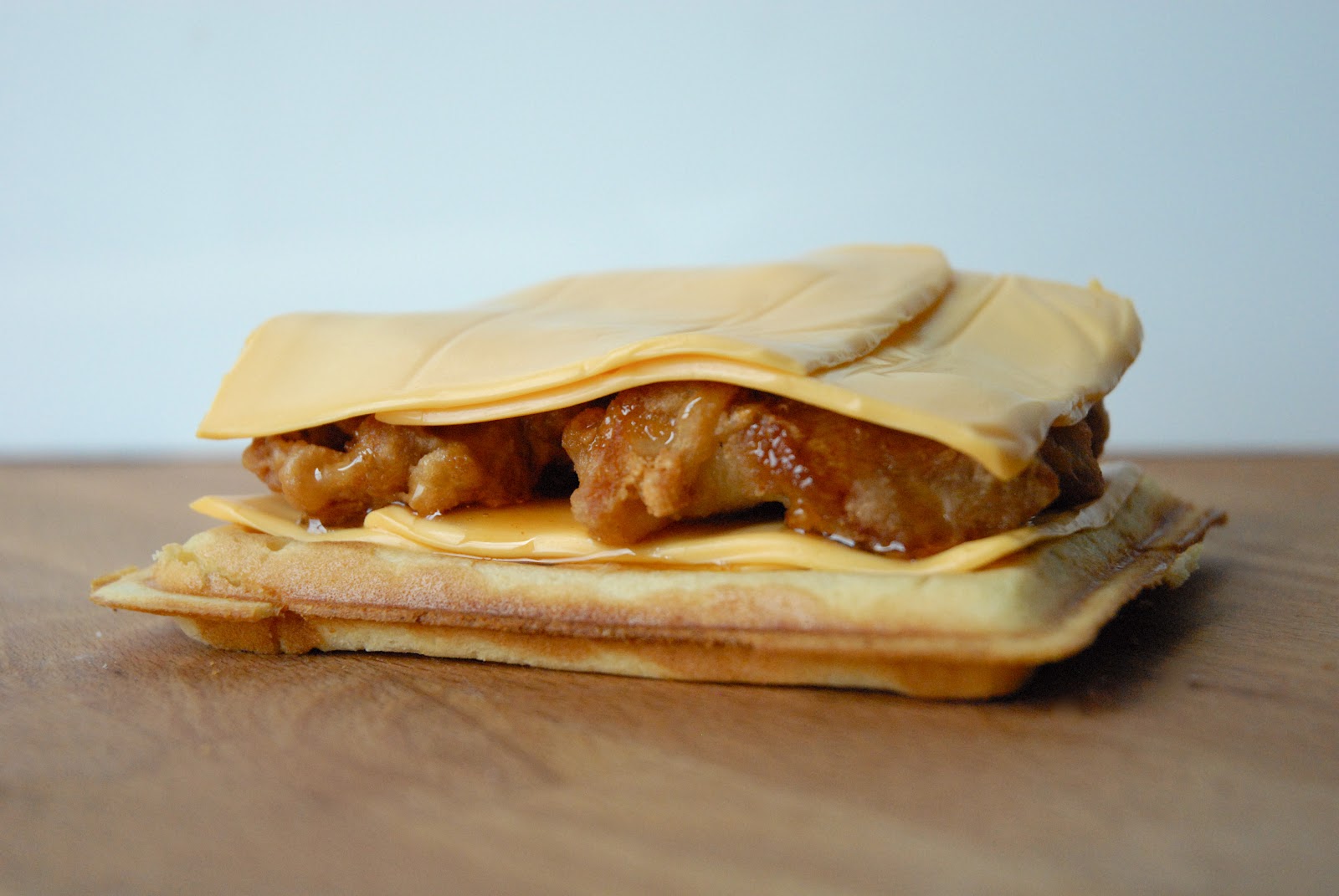 Once this little sammie is built, it's time to heat up the grill. Turn your burner to medium and melt a pat of butter right in the pan. Place the GC on top and let it cook until it gets all crispy and golden and melty and delicious and irresistible. Yes, a sandwich can most-definitely be irresistible. 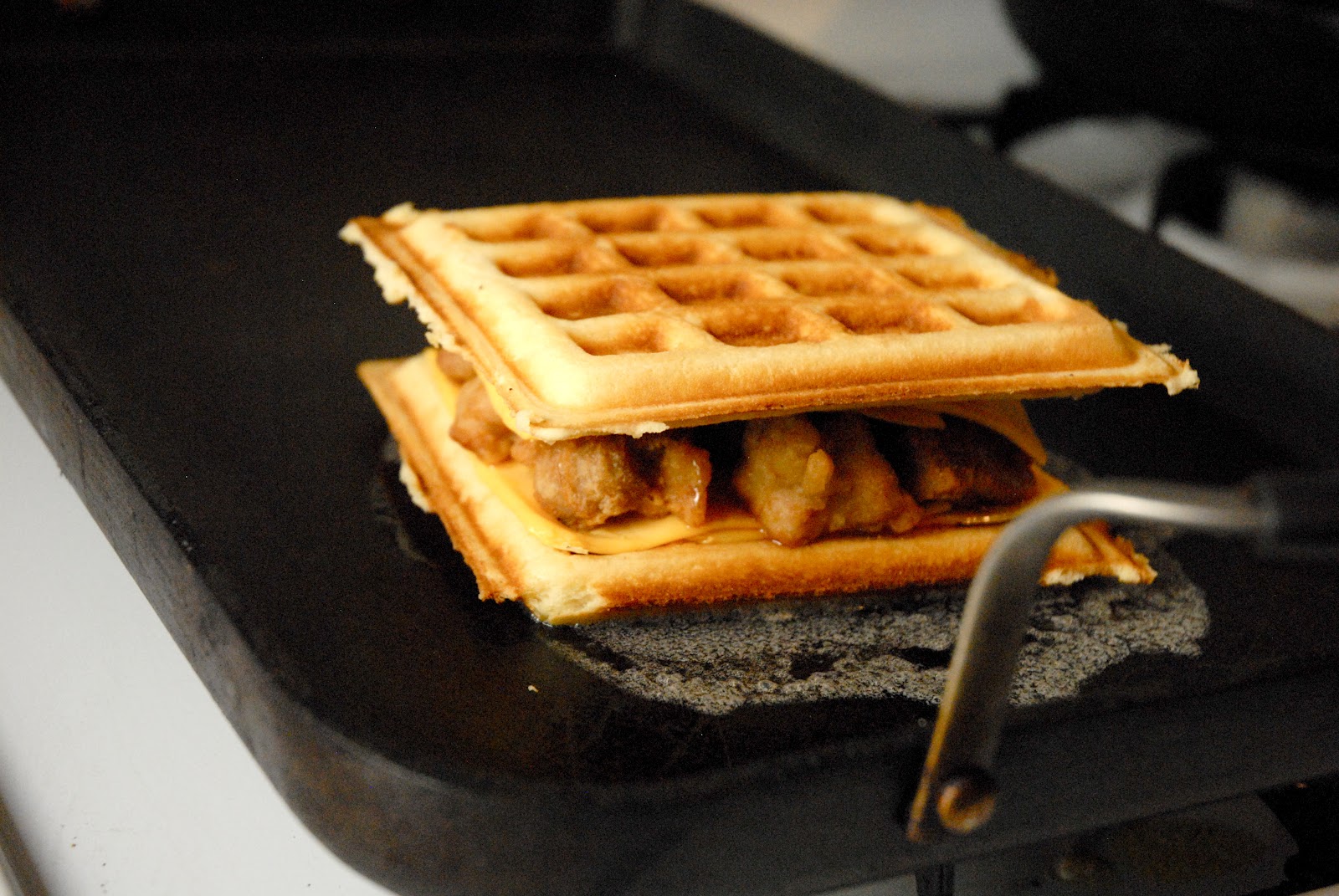 After grilling for about 4-6 minutes on each side, this bad boy will be all done and will anxiously be waiting to be shoved down your gullet and into your belly. I'd let it rest for a second to let those preservatives in the Kraft singles firm back up into scrumptious artificial cheese goo.

And that's it. Simple, easy, and hell-a good. So whether you make this sandwich for yourself or for someone who probably should visit the hospital to get an IV drip, it's going to be fulfilling, rejuvenating, and
utterly dank-licious. You can even grind up some painkillers and sprinkle it on top for a powdered sugar effect but that's probably a bad/extremely disgusting idea so don't do that. The ideas cool though.