×
So after writing last week's post and reading all of your comments, I've been drinking a lot thinking a lot. Can failed relationships really that fun to read about? Although I think that y'all actually liked my sob story (seriously, thanks for the comments), I feel as if last week's post may have pulled some heartstrings and might have made you feel bad for me. I know that everyone can relate to heartbreak, but that's not what I want this blog to be about. I want it to be about ridiculous stories and awesome grilled cheese sandwiches. So here's one funny breakup story to even me out from last week's disaster.

When I was a junior in college, I was recently single and was inadvertently rebounding with hot, tall, kind-hearted pianist dude who was a super-talented with his mouth. Although I had no real interest in playing the piano, my id told me it was a good time to start. I'd taken lessons when I was younger but quit when my piano instructor, who was about three hundred years old, died - just days before my first recital. After telling him about my unfortunate piano history and how I had always wanted to know how to tickle the ivories, he told me he'd give me some lessons. Of course, being the opportunist that I am, I went with it. So after a sessions of hanging out on his bed piano bench, fluttering my lacquered lashes, perking up my boobs, and laughing like he was the funniest thing in the world, I had a few songs memorized and a certain someone off my mind.

As we started hanging out more regularly, we took a road trip with some friends to see  Radiohead. We had the cheapest seats possible and had snuck a ton of booze into the venue because there was no way in hell that we were going to pay $10 for a bud heavy. Half a water bottle full of tequila later, the boy and I totally tricked the bouncer into letting us snag some seats in the third row. At that I point was pretty wasted, but I can vaguely remember sloppily making out while they were playing "All I Need" and feeling like this maybe wasn't a rebound after all. But then, as soon as we got back to Tallahassee, I guess I WAS NOT all that he needed because he totally dumped me for some spray tanned Hooters waitress.

Yes, a Hooters waitress. A shiny-orange-shorts-wearing-camel-toed-Hooters-waitress. She might have even been a stripper. At least that's what my friends told me, but I think they were just trying to make me feel better. But I get it, I get it. Free chicken wings and big ole titties are very appealing, especially to a 22 year old man-boy. At the time I was truly devastated. How could some girl with frizzy bleach blonde hair, dark roots, and scrunchy socks be more appealing than me? I knew about cartoons, could cook amazing stuff when I was wasted, and I could even quote Mr. Show. Isn't that what every boys wants? Hahaha. Yeah, right, not so much. Now that I'm 26 and haven't seen a Hooters retaurant, let alone a chicken wing waitress, in like 5 years, I think it's the funniest break-up story ever. I totally got dumped for chicken wings! Or maybe it was the blow jobs that he was getting in the parking lot after she hooked him up with a free meal.

And although this grilled cheese has absolutely nothing to do with Hooters or shitty boys, it is really good and I think you'll dig it. Oh! And of course, you voted for it on Facebook. 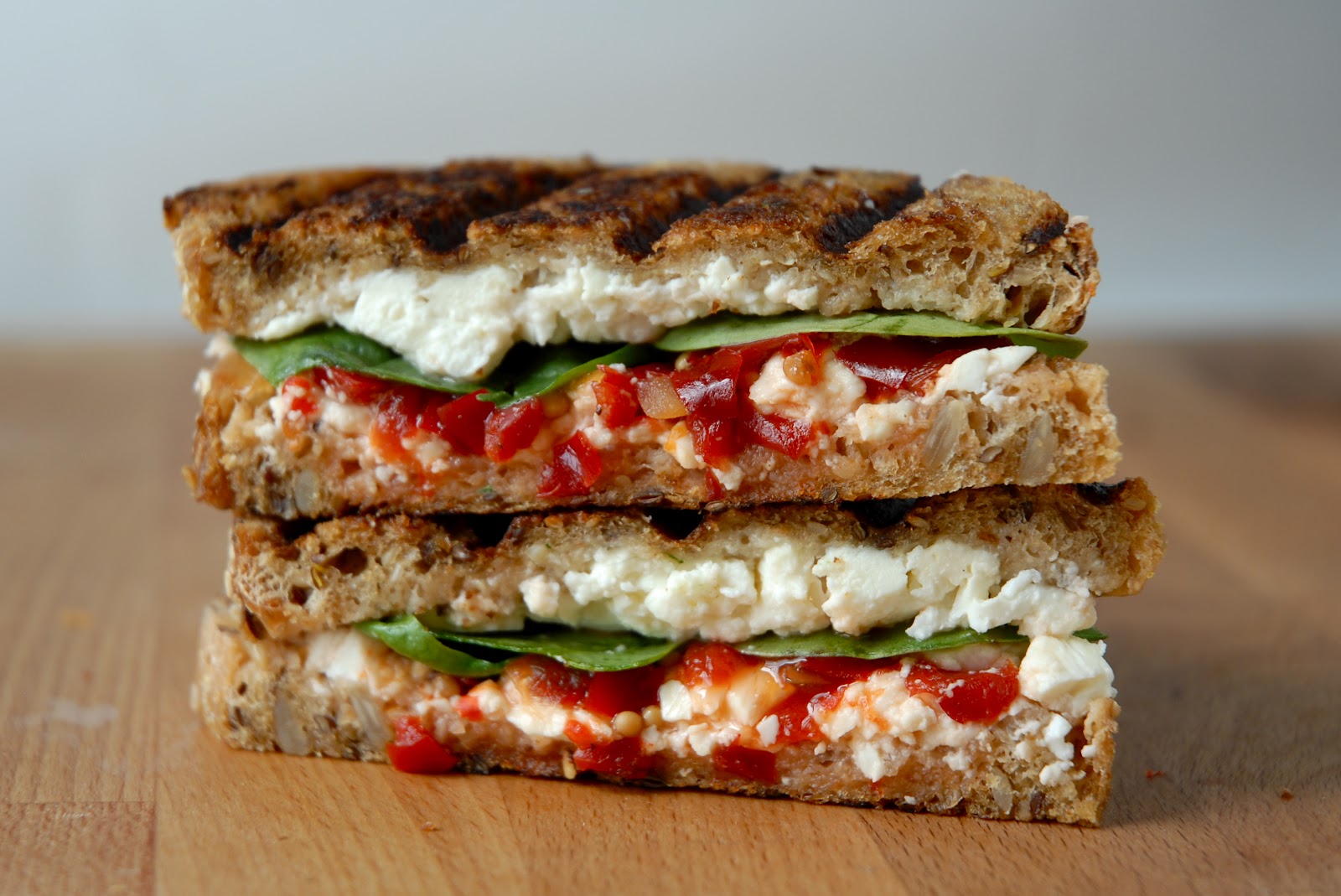 Grab these goodies and go with it. 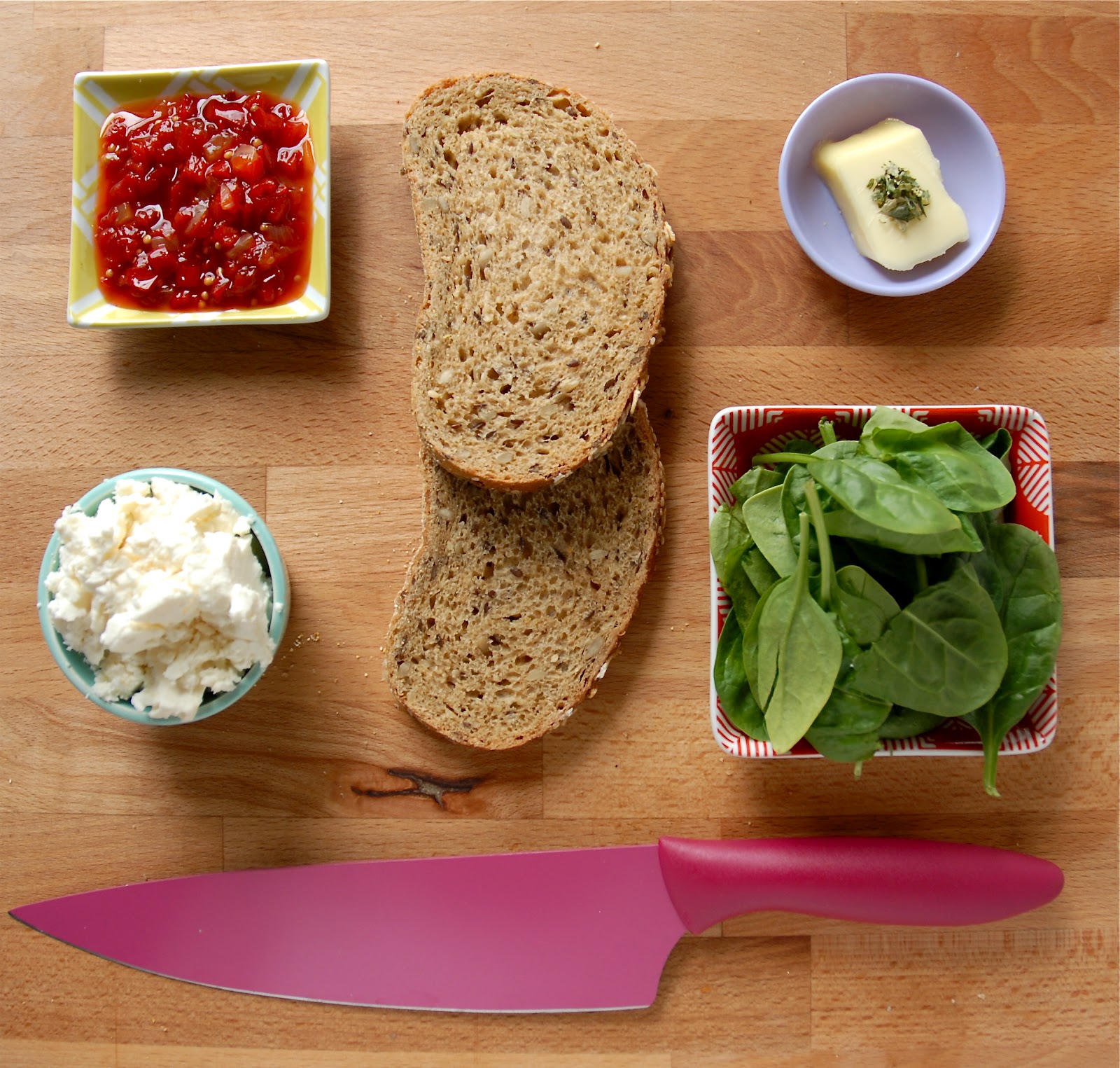 Just like the beginning of every single post I do, the first step begins with sprinkling on some cheese. This salty, moist Greek queso doesn't really melt but it does get all soft and creamy. Just like your brain feels when you start to fall for someone. Then it hardens up to a dried mass of disgustingness that's similar to when some dingdong dumps you for a Hooters waitress. Just kidding. I'm not bitter about it anymore, I swear. 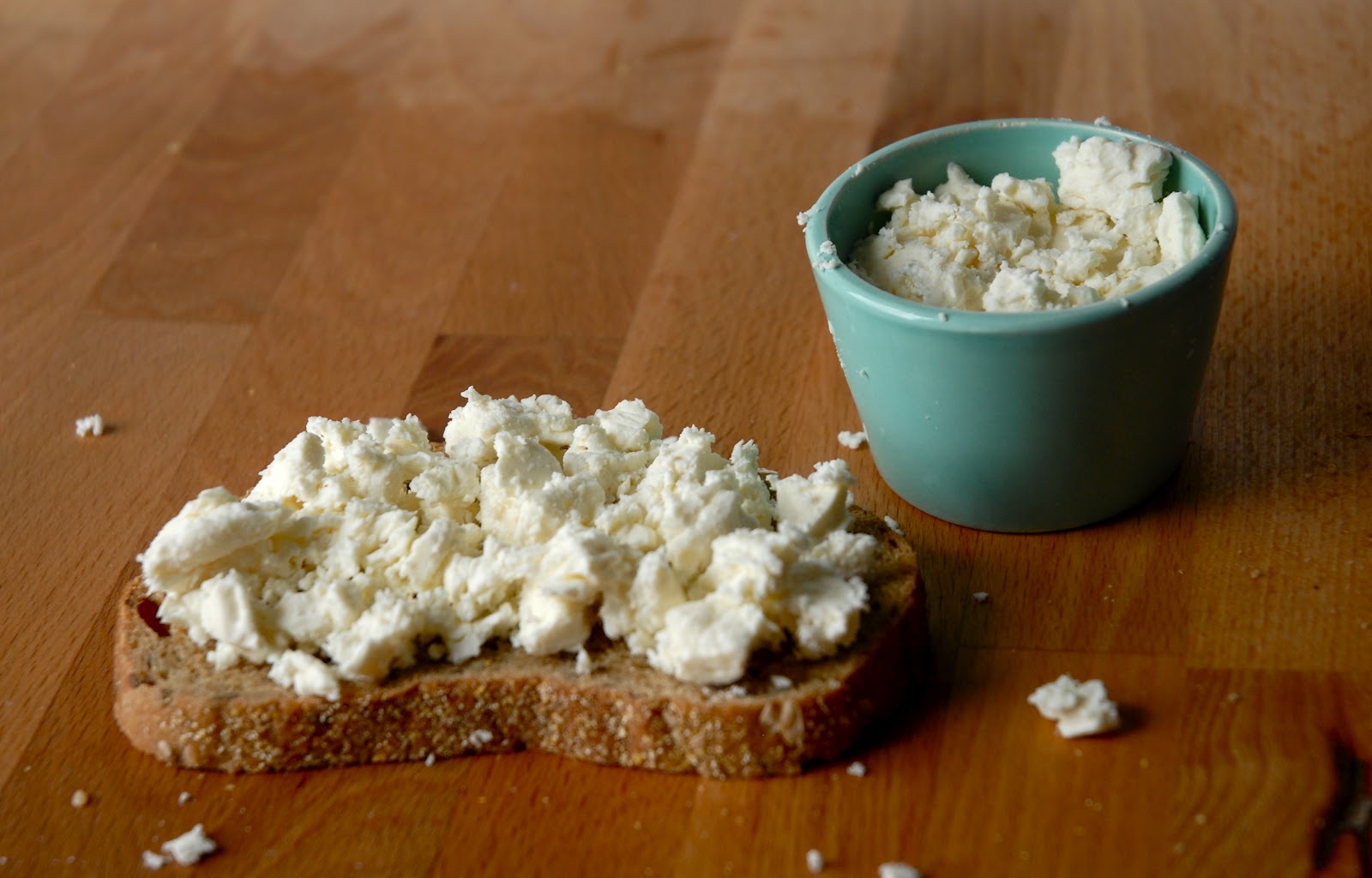 Then spoon on some of the red pepper relish. Its tart, sweet bite contrasts nicely with the saltiness from the feta.

I think that opposites attract but I wouldn't take dating advice from me. 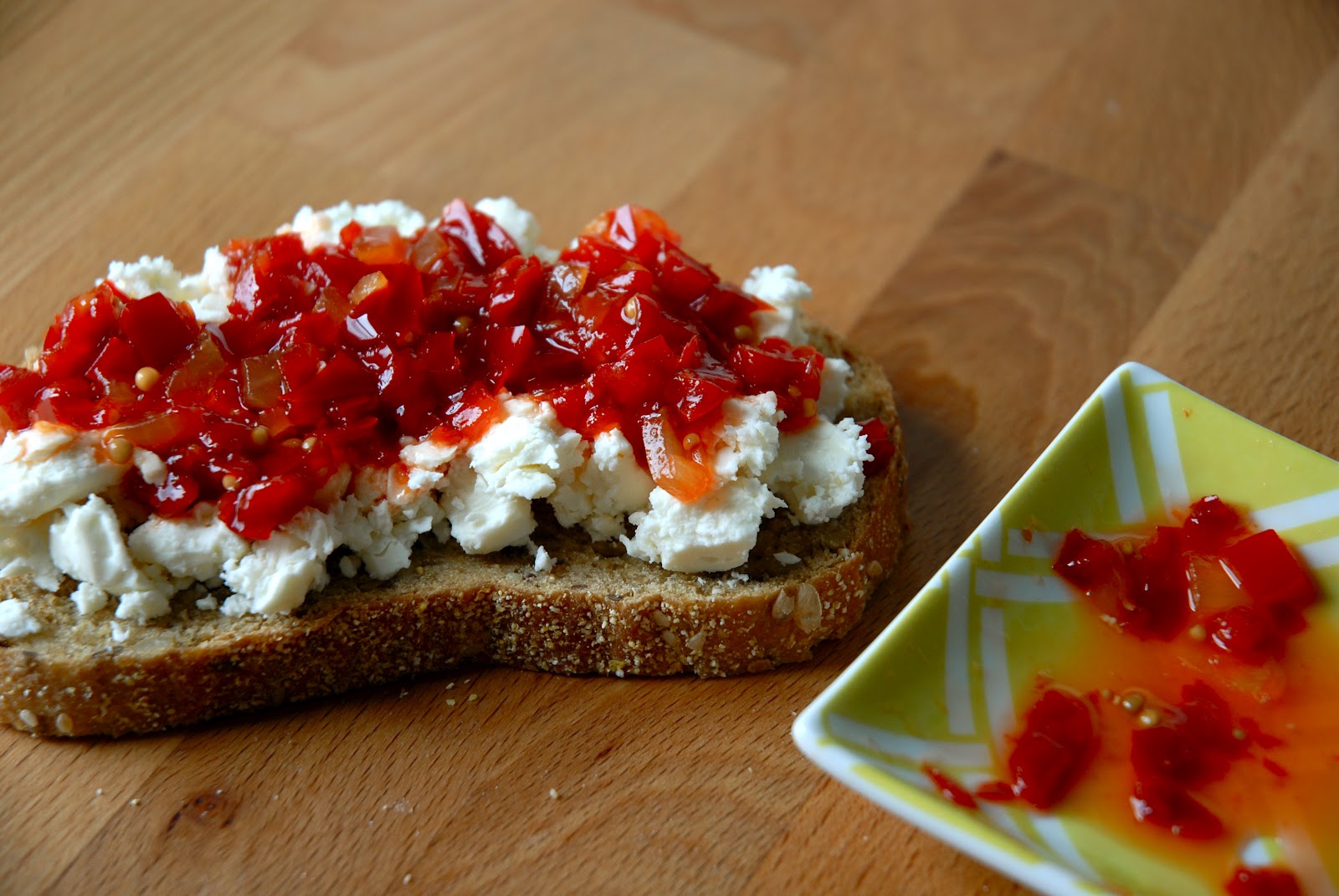 Then for some freshness, add a few baby spinach leaves. I think these tender-hearted veggies add a nice textural variation and it's a good ingredient when you need to switch it up. 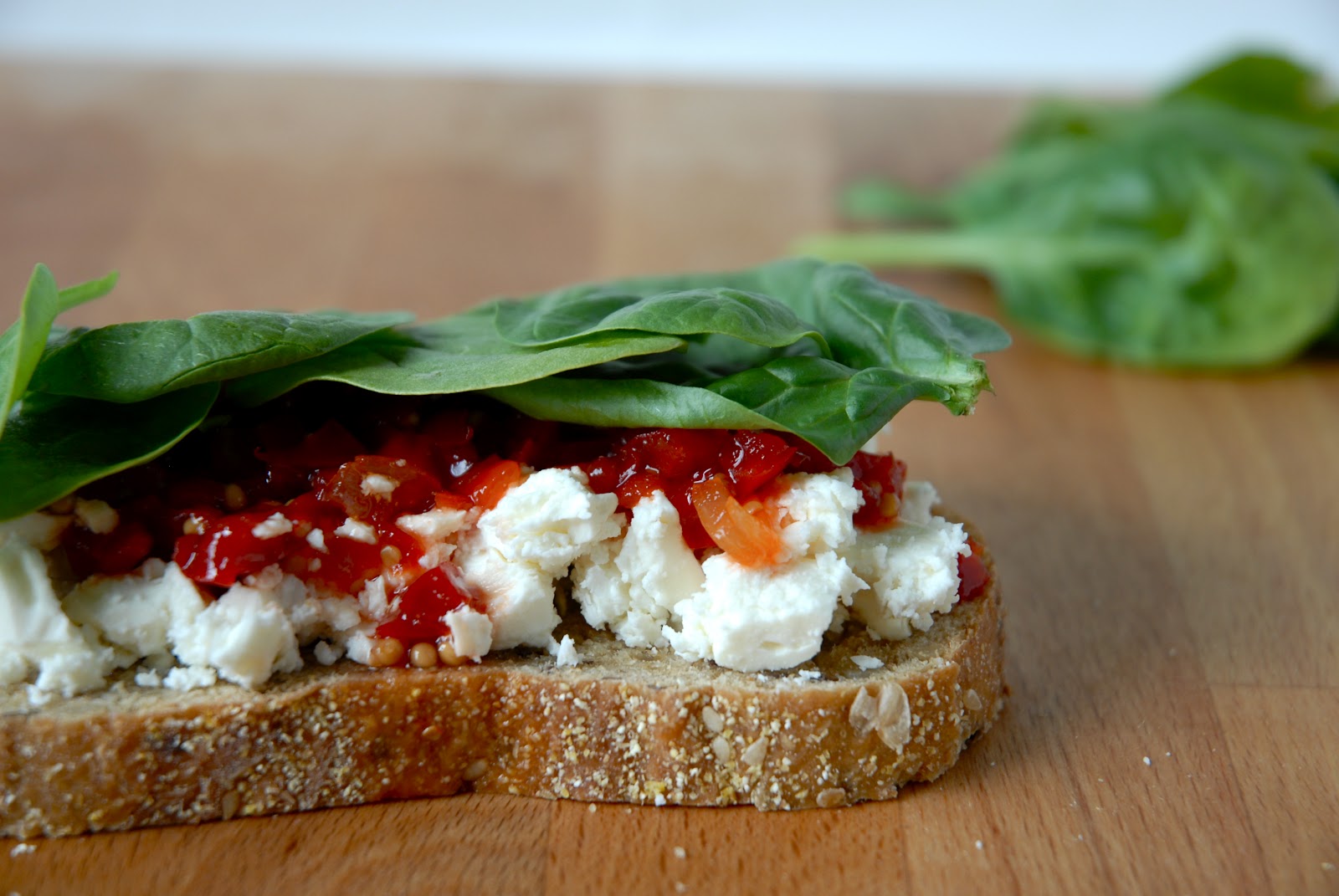 Sprinkle on some more cheese for good measure... if you haven't scarfed it all up yet. Emotional eater.

Add the top piece of bread and wait four years until you can laugh about that one time when someone cared more about buffalo sauce and ranch dressing than your chilled out demeanor and cool dance moves. 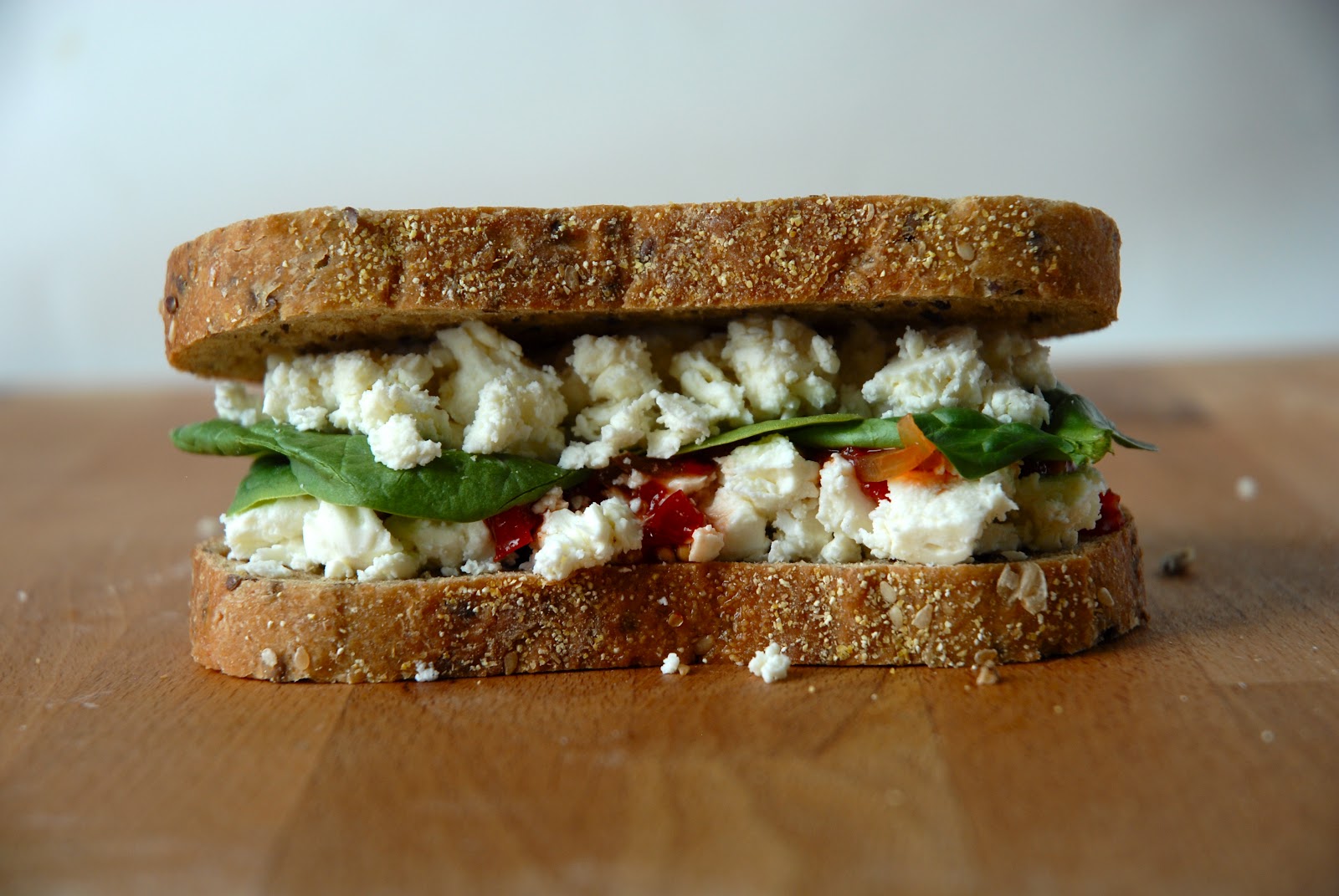 Turn your griddle to medium high, blast your sandwich press with some fire, and melt some of that butter alongside that dried parsley. Gah, her skin was really dry , too!  Place your sandwich on top of the melted herb butter. When your press gets super hot, carefully pick it up and sear the crap out of your grilled cheese. 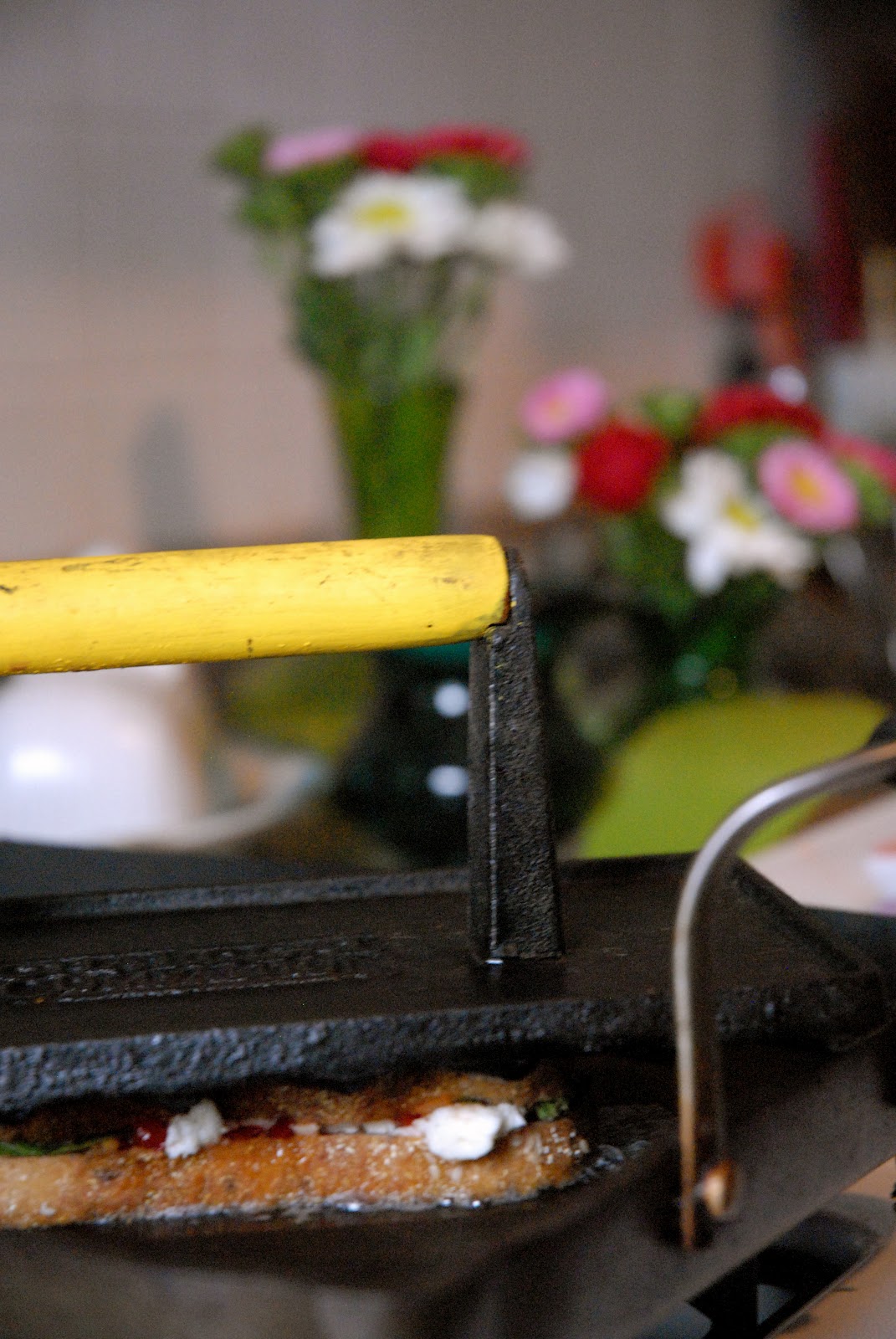 It'll look like this! No false intentions or misleading bullshit with food. 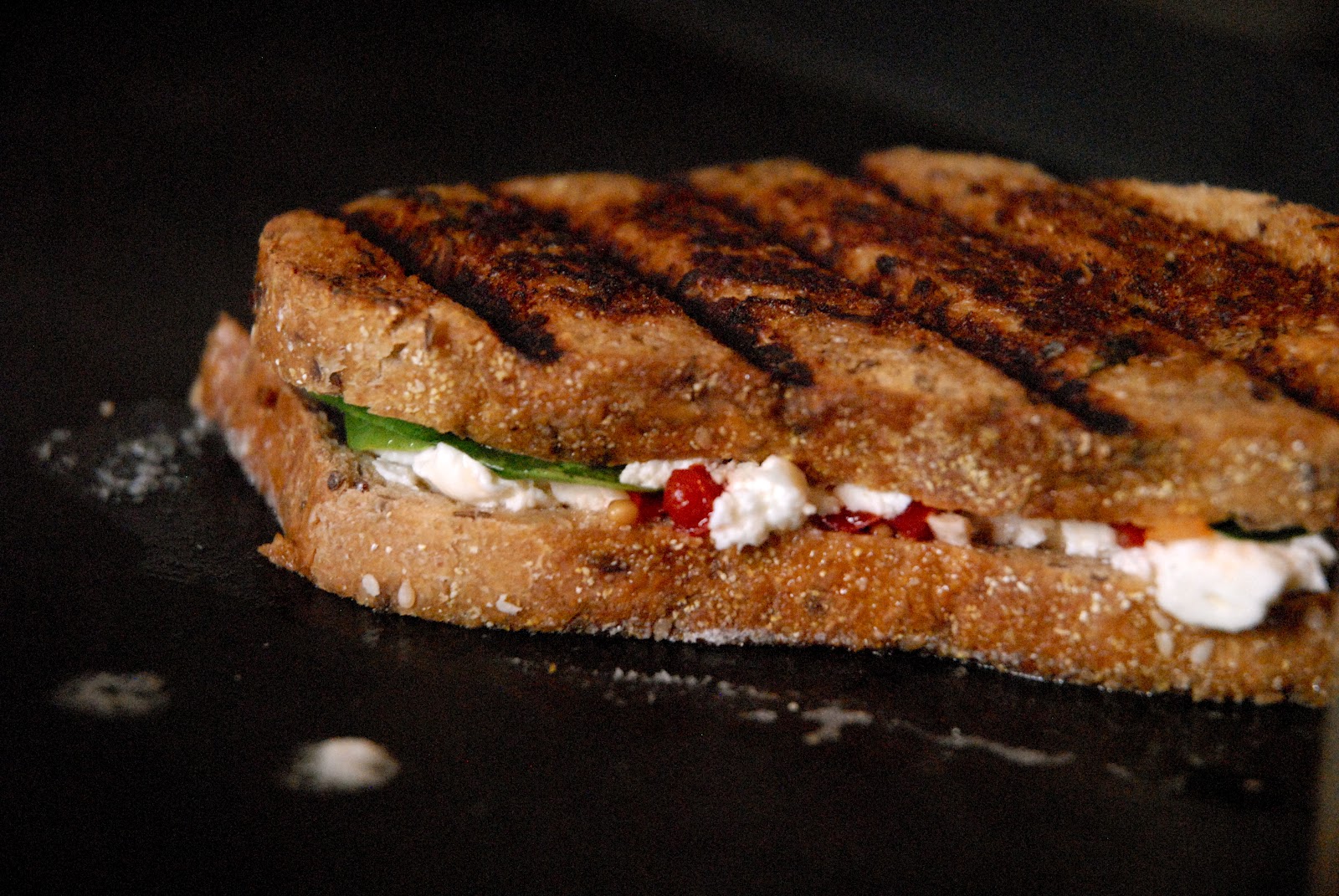 Now let it sit for a minute until it becomes a funny story that you can blog about in a couple years.

And in case this whole story made me sound like a complete bitch, there's nothing wrong with being a Hooters waitress. Actually, if you are, I'm a little envious. I could totally use a boob job and some chicken wings tonight. Thanks y'all.