This sloppy joe grilled cheese recipe was one of my first viral recipes back when I started this blog a million years ago. It’s made with leftover sloppy joe beef, sharp cheddar, and pickle flavored potato chips between two brioche buns. On the outside of the grilled cheese, a crispy cheesy crust is formed to add extra goodness! 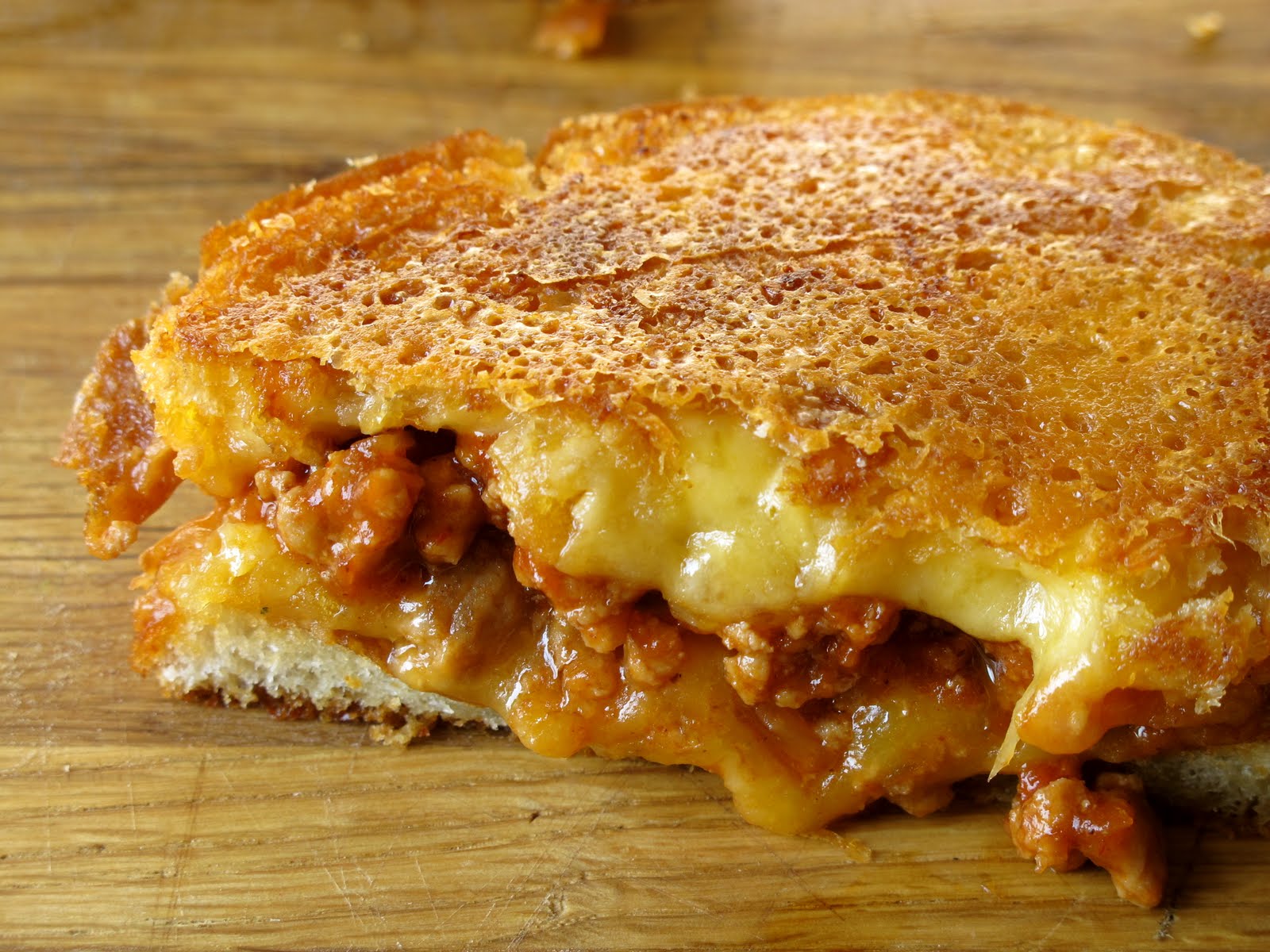 Bye bye Brooklyn! I’m heading back to the good ole Sunshine State tomorrow to get real sloppy have a nice little vacay.

I’ll be seeing family, tailgating at the Doak, eating lots of Southern food, and reliving my college days; the good ones at least. Let’s not get into detail about the long nights that helped me become “Champion” the drinker.

FSU did teach me a lot though. I mean, sure, I got my bachelors, and learned a ton about psychology and aging.

But I also learned about the more important things in life; like how to hold my liquor and how to trick people into thinking that I actually cared about football. Which I did… sort of… at least the tailgating part. But most importantly, I learned how throw the most trashy eloquent dinner parties at four in the morning.

And ya know what? I think this just might be where I developed a knack for weird grilled cheese combinations and cooking methods. I’d make due with what I had, because believe me, you didn’t want me driving to Club Publix in the wee hours of the morning.

And that’s where this off the wall way to cook GC’s comes into play. One night long ago (ok, so like four years ago when I was a junior at FSU), I had some french bread that had a lot of holes in it. When I cooked up the sammie’s, the cheese started to ooze out and even though I was freaking out (because I thought I ruined the sandwiches), I went with it.

I guess you could call that liquid courage.

This accident turned into a delicious disaster – give the bread the holes so that the cheese can melt out and you can have the best crust of all time. So yeah, you’re going to poke holes all in the grilled cheese. GET EXCITED! 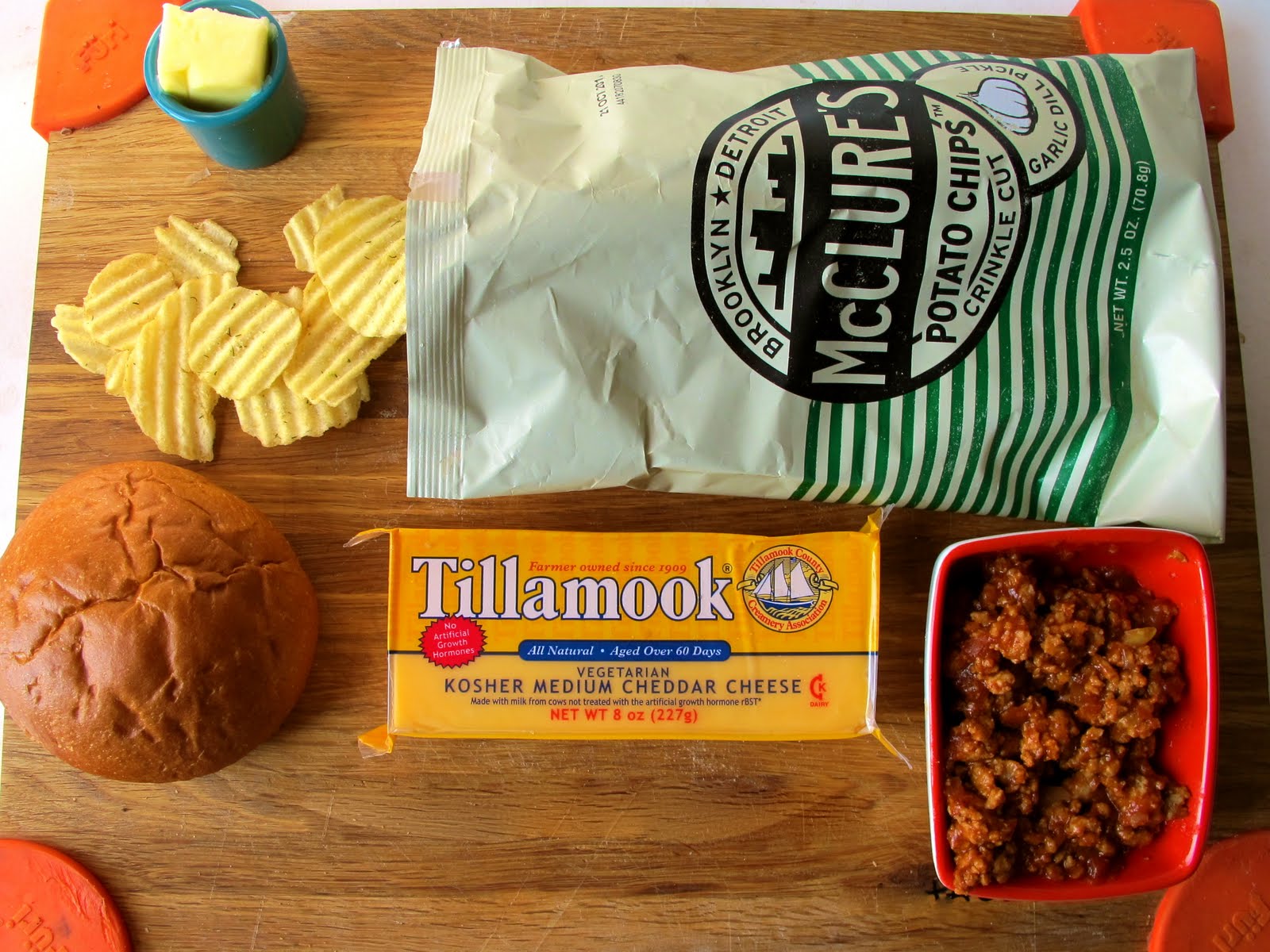 Best Cheese to Use

If you’re new to reading this blog, then you probably haven’t heard me rave about Tillamook very much. They’re basically one of my favorite cheese companies OF ALL TIME. Thanks to them my friend and I were flown out to LA and got to be a part of the Grilled Cheese Invitational. BEST TIME EVER.

Ok, enough of the cap-locks – you get I’m excited about this, right? So, basically if you ever need some bomb a** cheddar you better do yourself a favor and use Tillamook. It’s kind of hard to find on the East Coast but luckily some Trader Joe’s and Whole Foods carry it. So yeah, get it and shred it up. The finer it’s shred, the better it’ll melt. 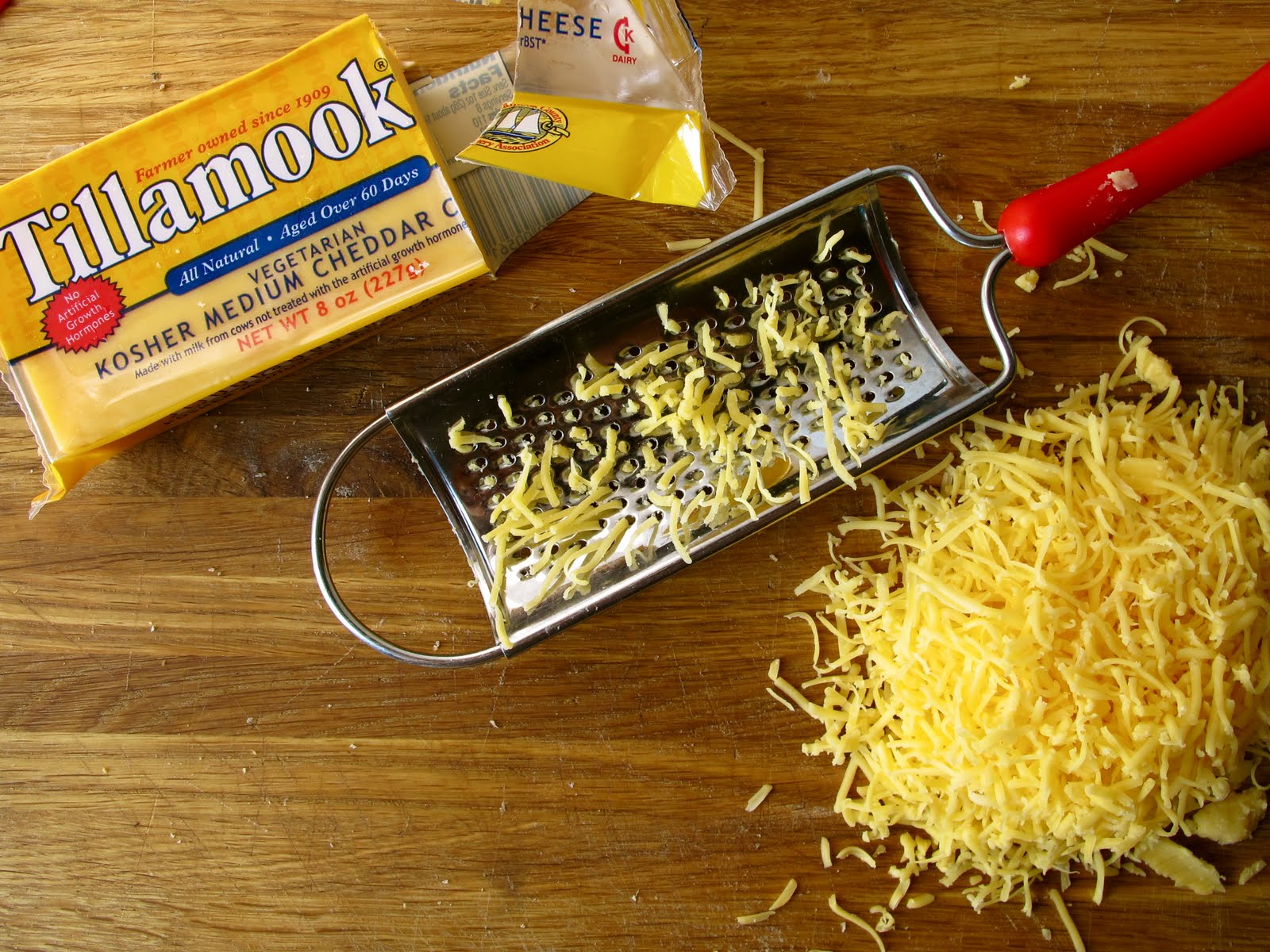 How to make a Sloppy Joe Grilled Cheese

So to begin, you’re going to want to use one of my tricks that I sometimes do here on GCS. When you’re trying to use a bun, you’ll want to cut it so that the two bready sides can function as the outside toasted pieces. I know that makes absolutely no sense, but basically you’ll want to use the sides that are not the butt so that you get that nice toasty texture.
I had a super huge brioche bun so I chopped off the top and discarded it (ok, so i gobbled it up), and used the middle and bottom pieces. Flip the bottom piece so that the butt will be the side that you build the sandwich on. 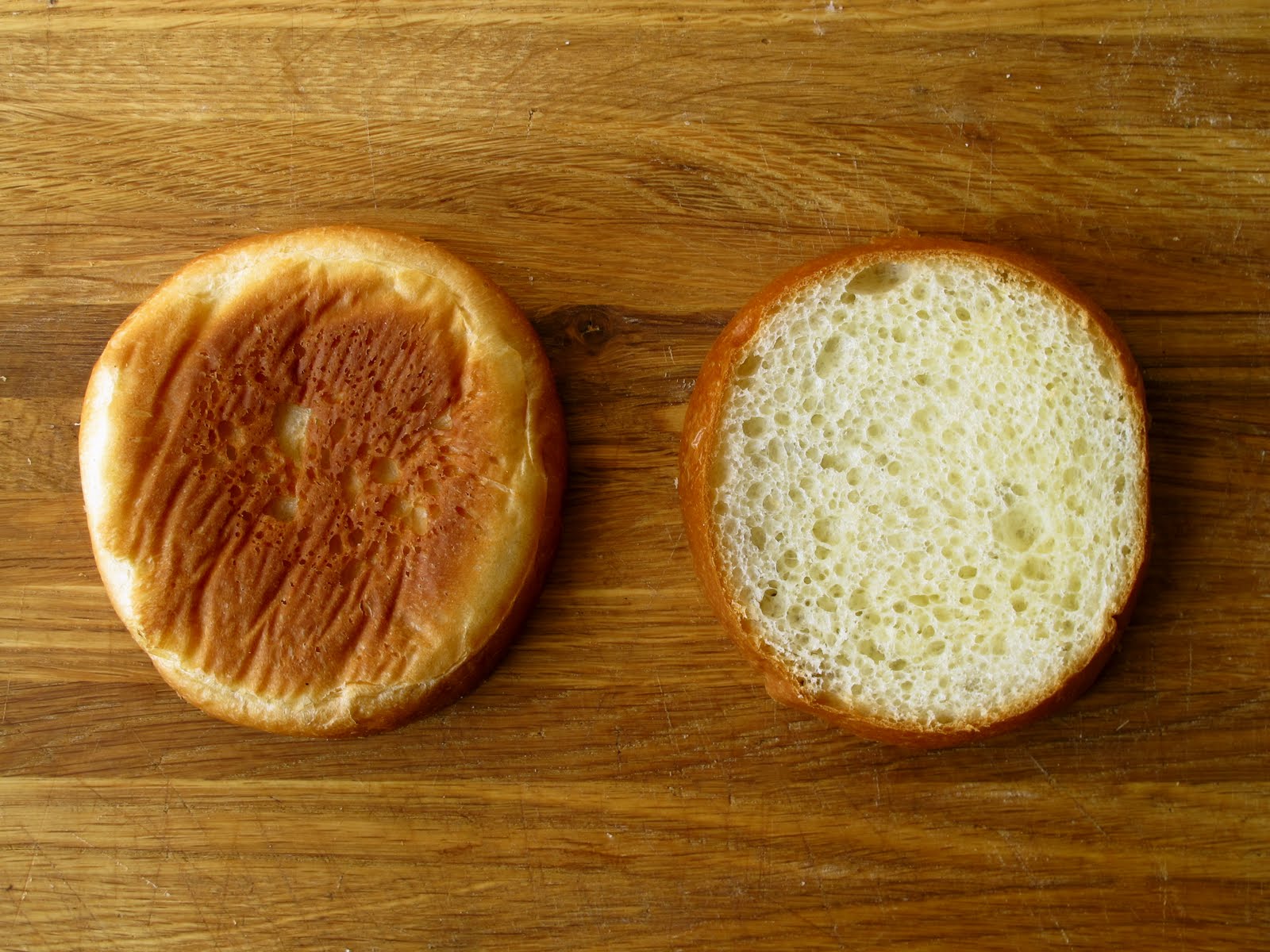 Righty-o, so now that you’ve got your bread sliced, you’ll want to pack on a hunk of shredded cheese. I made this at like nine in the morning and I ended up eating like half of the cheddar I cut, so I kept having to shred more. That’s totally fine – it’s actually exactly what Tillamook wants; their customers eating whole blocks of cheese at nine in the morning. 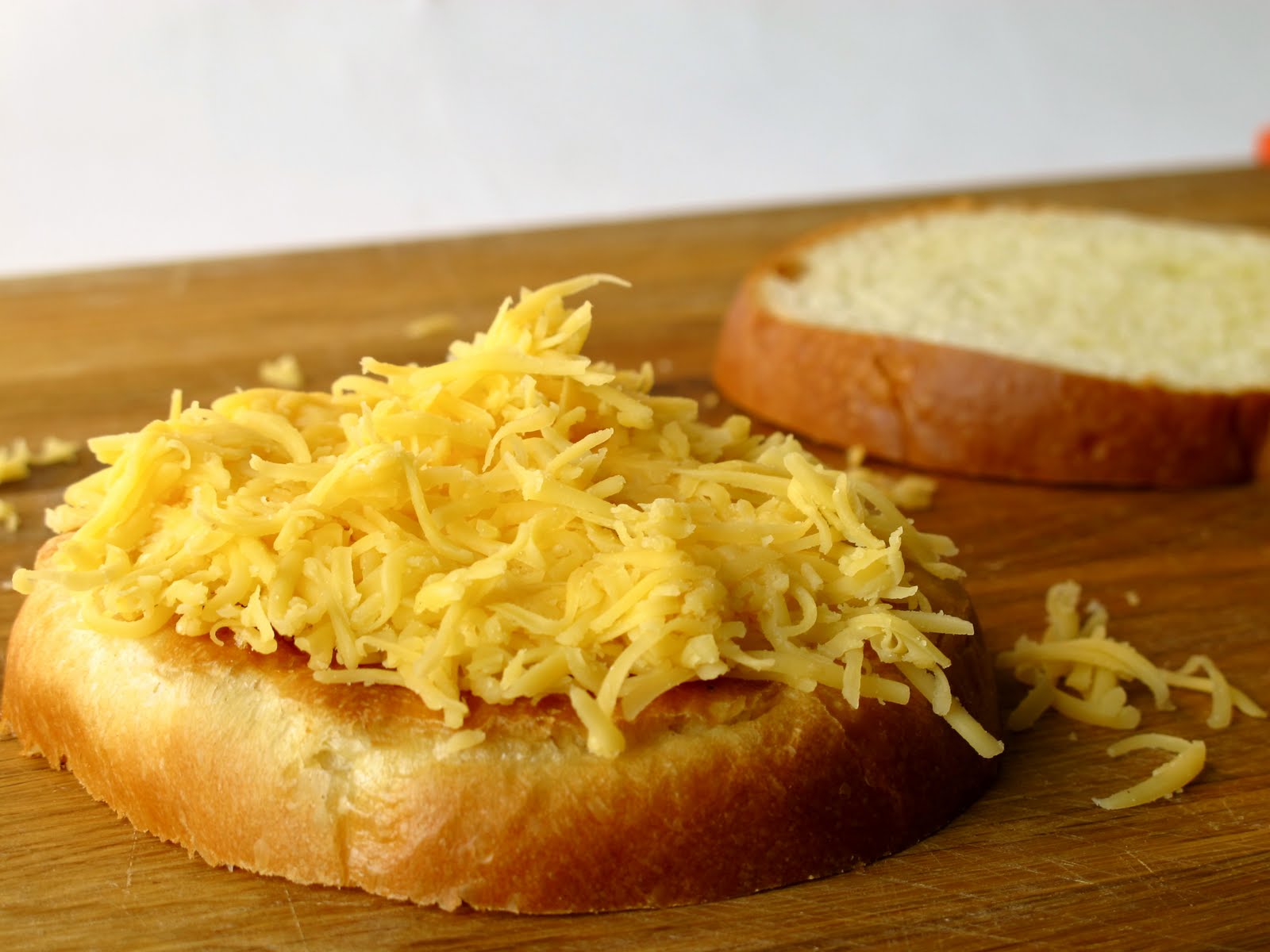 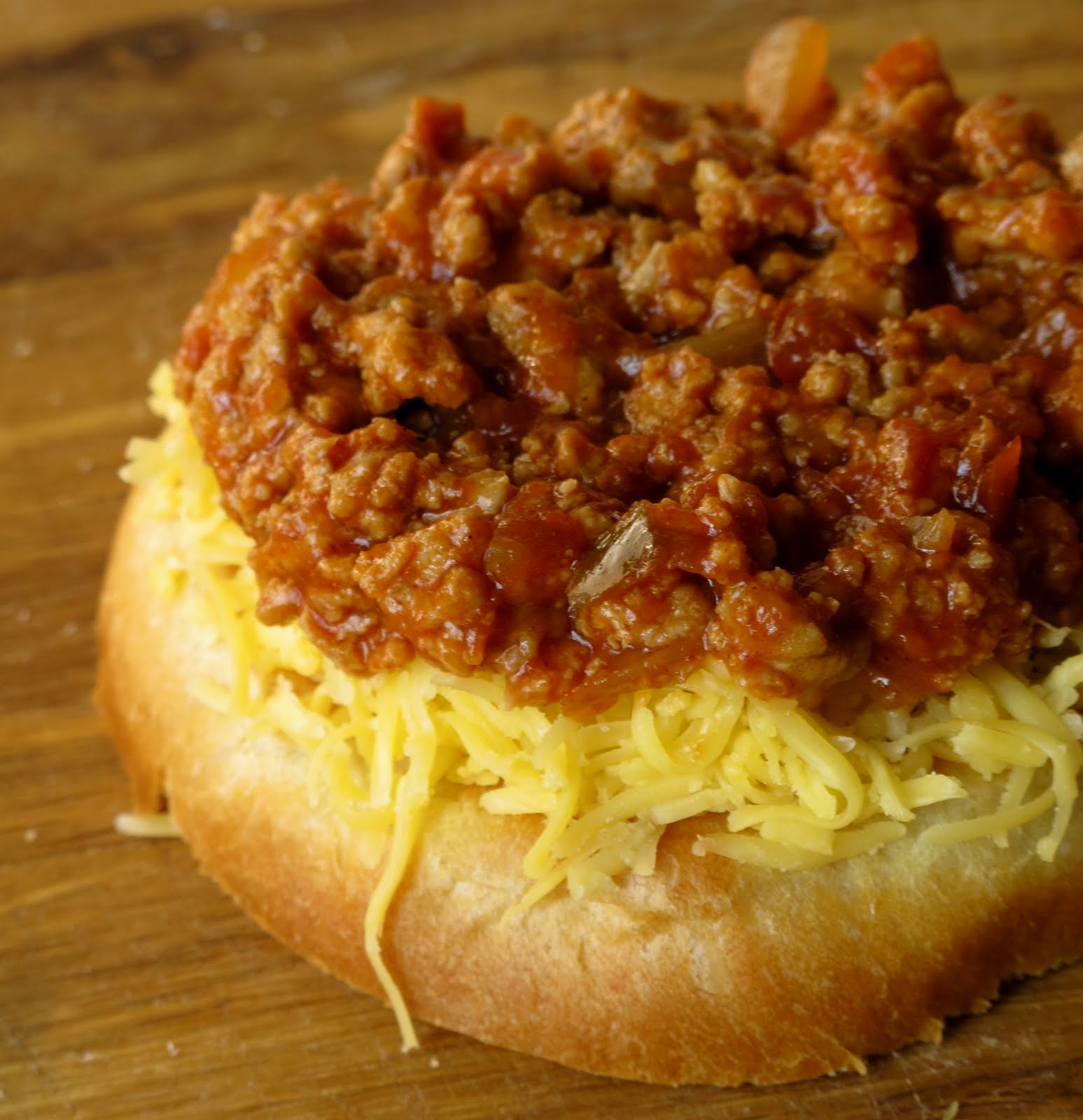 Now for the chippies. I have always put chips on Sloppy Joe’s. I don’t know why or how it started, but it’s something that I have to do. The crunchy texture just makes the sandwich so much better. Try it.

And if you haven’t had McClure’s pickle chips, get yourself some. We sell them at my work, Depanneur, and let me tell you what – mmmmhmmmm. That’s it. That’s all I can say about them. Oh wait I guess I can share what my roommate said about them – “they kind of taste like salt and vinegar mixed with sour cream and onion and pickles.” She’s a genius, that one.

So pile on a few or smash ’em on. It really doesn’t matter. They’ll get crushed anyway. 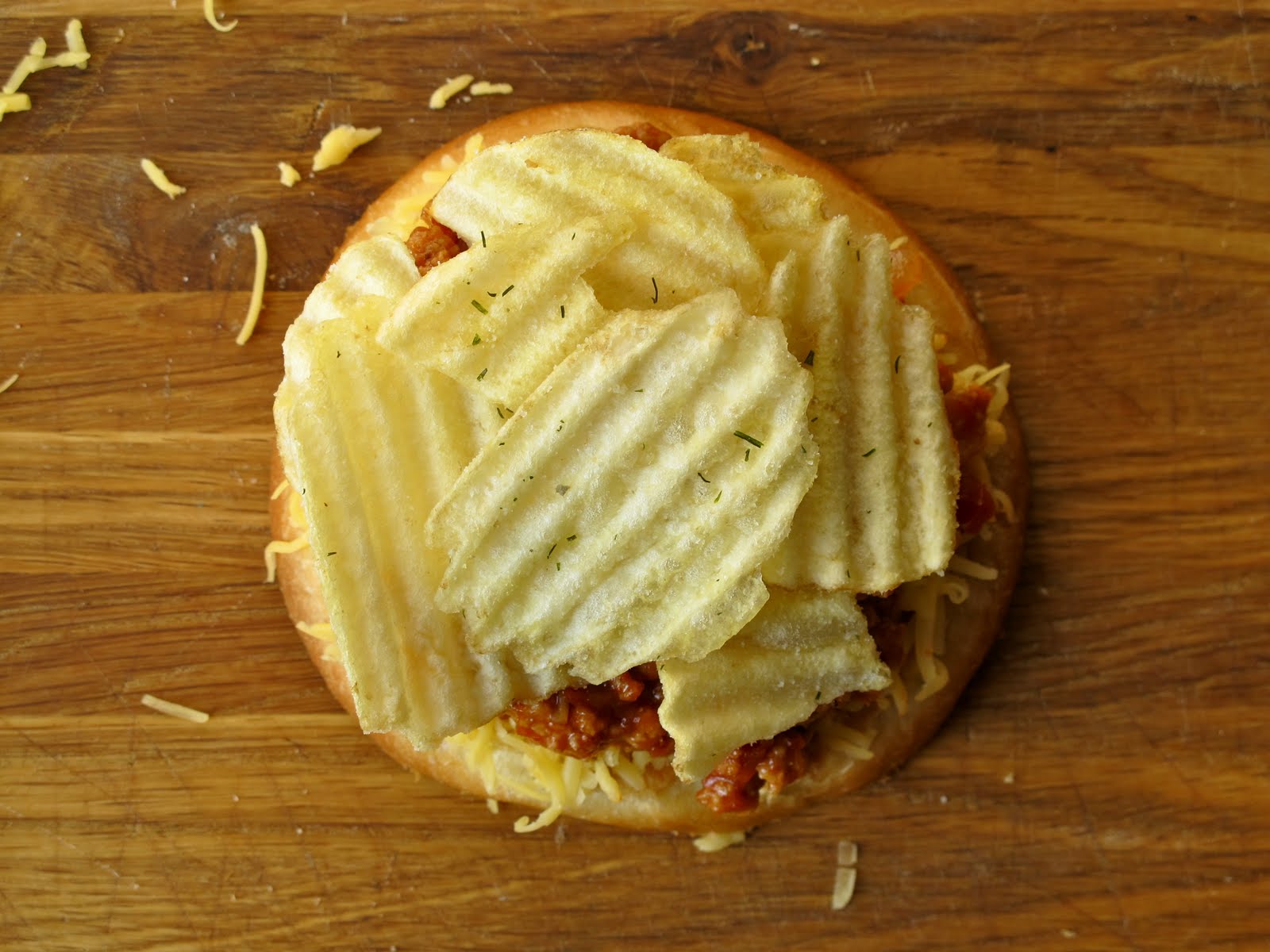 Now, stack on the rest of the cheese. 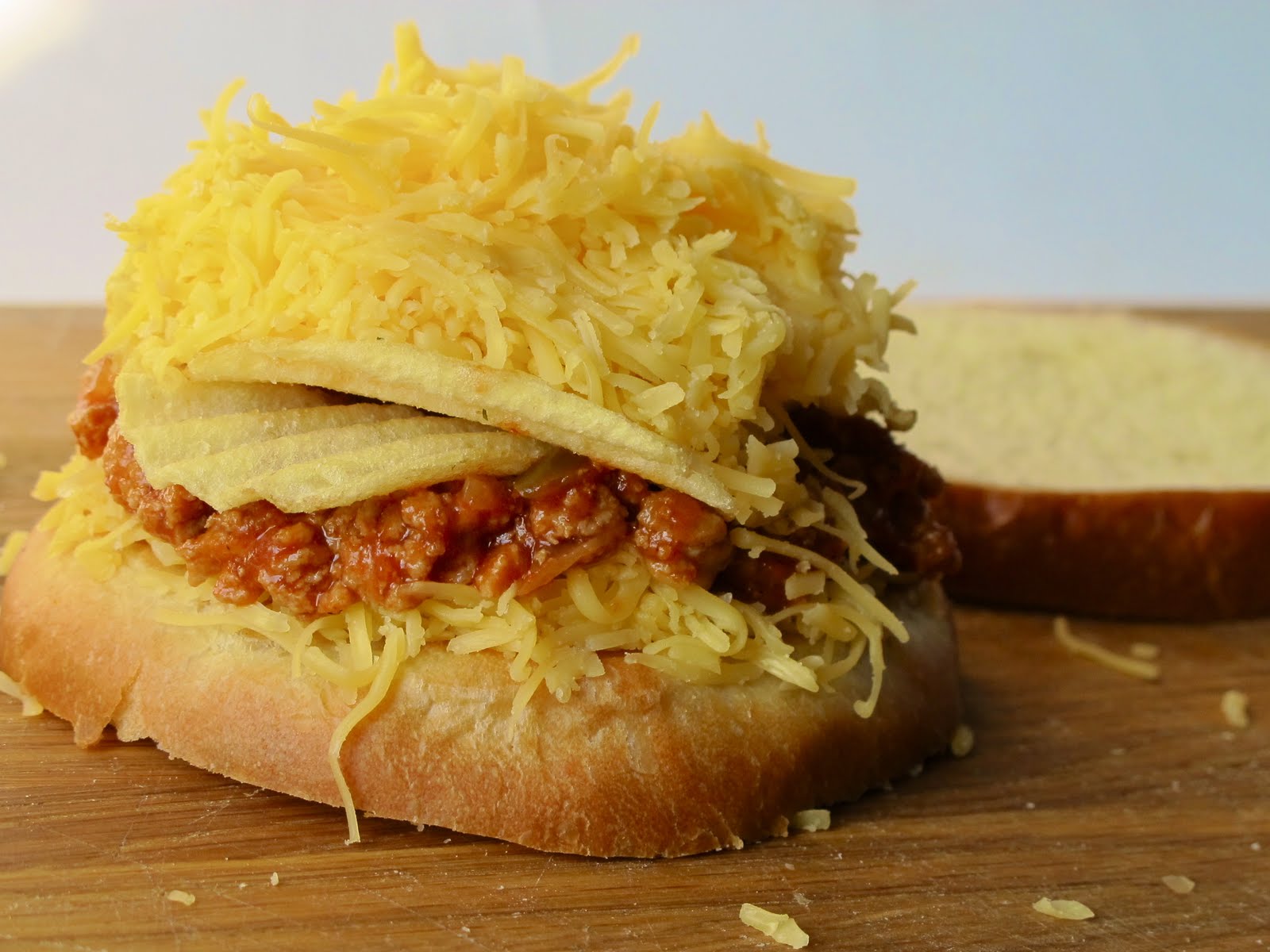 And the top piece of bread. 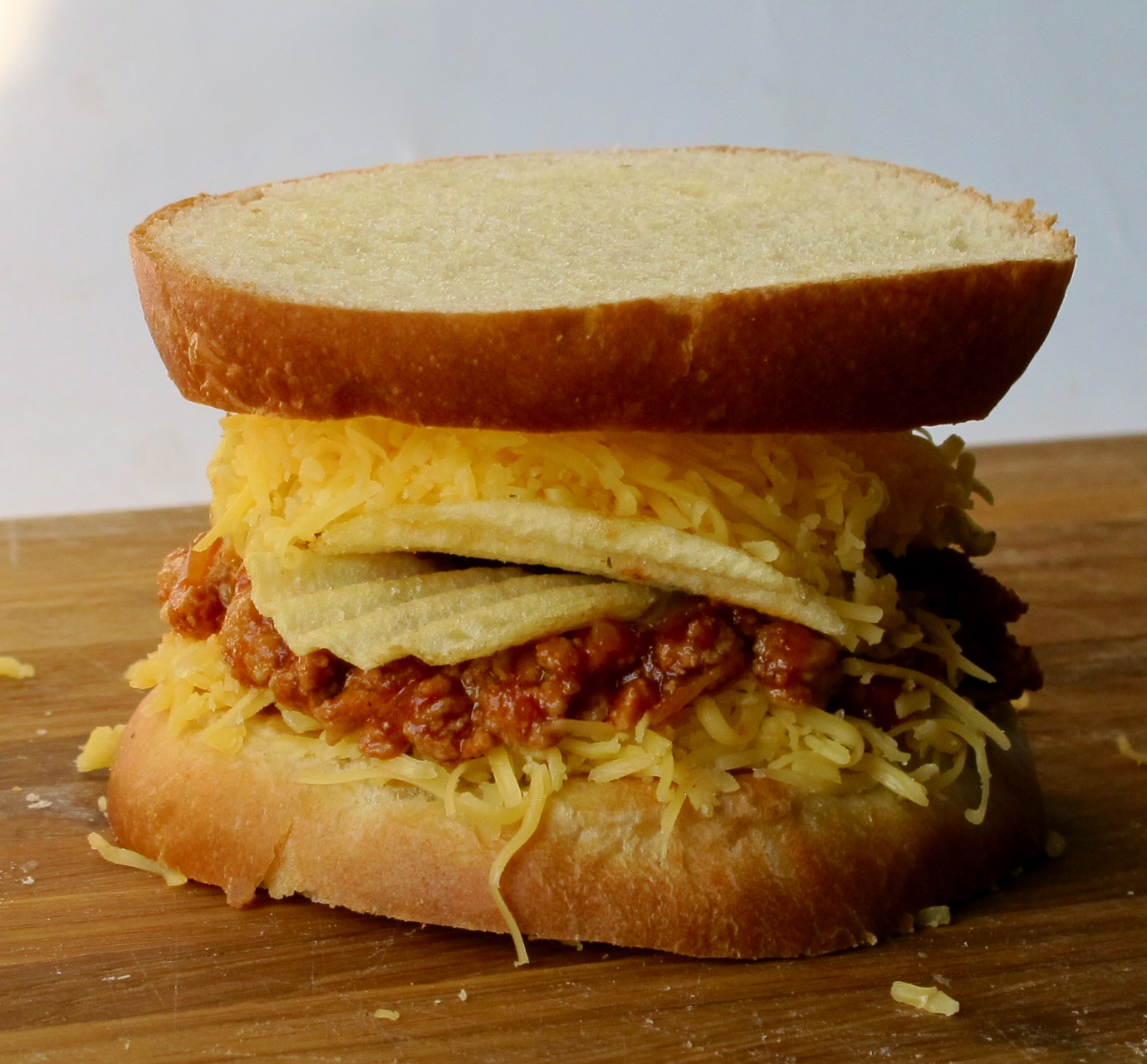 Then you’ll want to butter both sides of your bread and turn your burner to a low heat.  Once your sandwich is in the griddle, go ahead and take your straw and poke holes all over it. This will create little tunnels that’ll let your cheese flow out like molten lactose. As your liquid gold starts to ooze out, it’ll create a cheesy crust that sort of tastes like a Cheez-It BUT BETTER.

Make sure to do the hole-poking thoroughly on each side so that you get a nice-even cheesy crust. 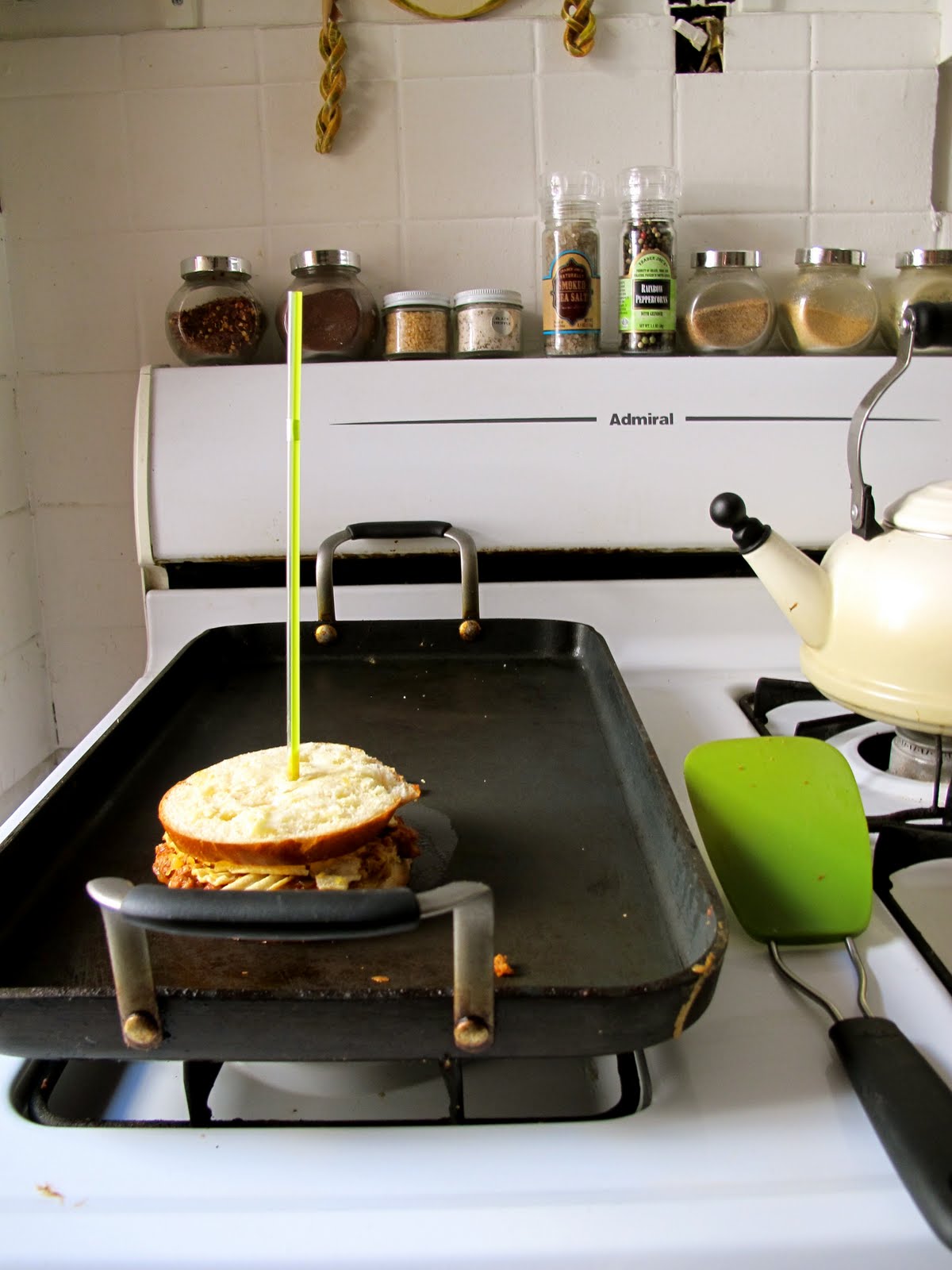 Since it’s cooking on such a low heat, it’ll take like 7 minutes to cook on each side. Because brioche burns so quickly and since you want your cheese to be able to travel through the holes, it’s very important that you give it ample time to cook. Don’t try to rush it. Relax, drink a beer. Unless it’s nine in the morning, and in that case, drink a bloody mary or something.

This is what the sloppy joe grilled cheese should look like if your cheese was able to melt out through the holes. If it didn’t, simply just smack some shredded cheese on the outside and grill it so that it cooks it real quick. It’ll work the same way but the hole method is much more fun. It made me feel like a scientist! A grilled cheese scientist! 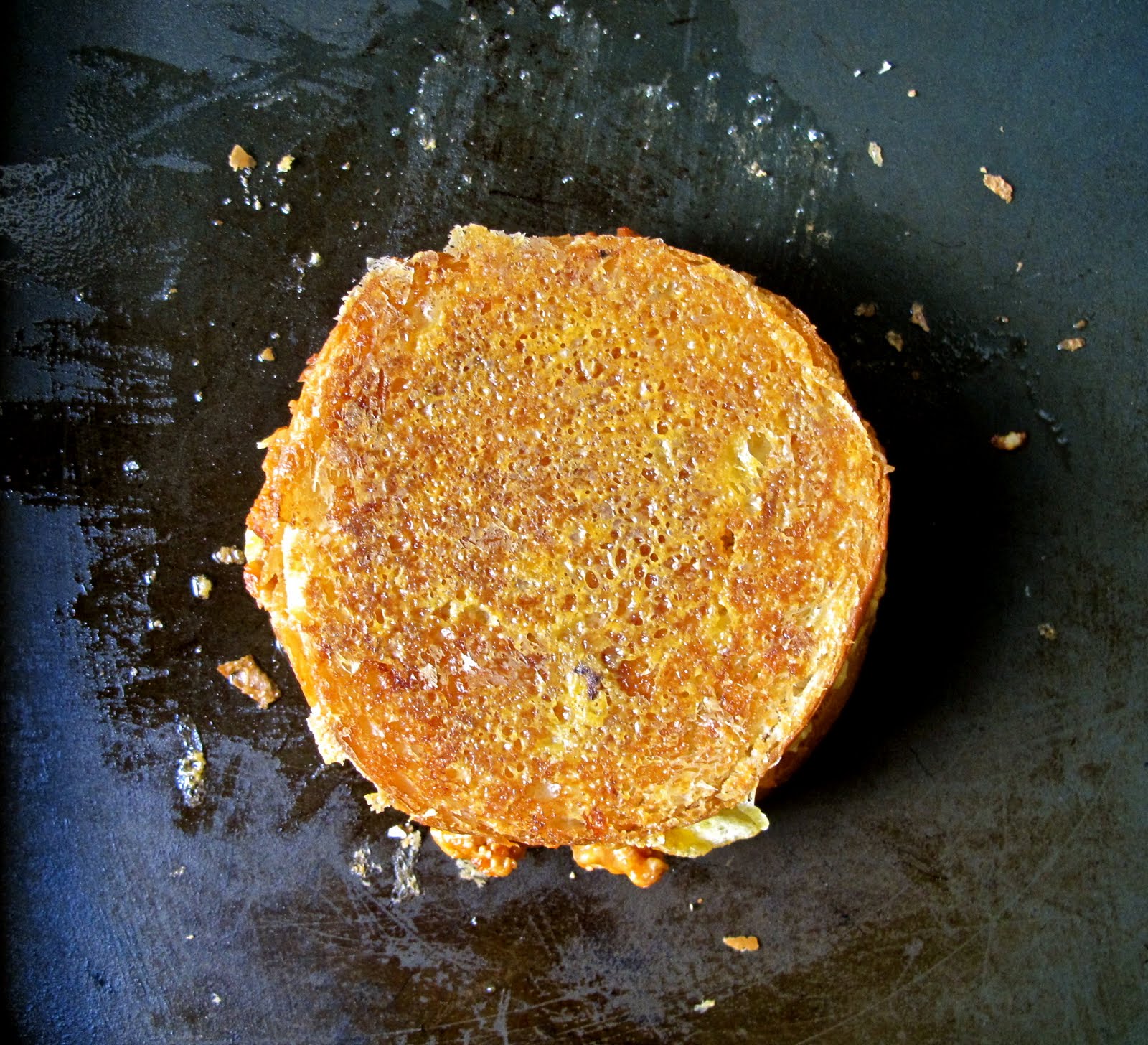 After that, you’ll want to take it off the stove-top, let it set for a minute, and then serve it while it still looks all pretty and delicious like the one below.

What to pair it with:

So I guess that does it for today. I’m sure I’ll have some interesting things to tweet about while I’m tailgating at the FSU vs. Oklahoma game.

While I’m there, I’ll also be working on three more neat ways to cook GC’s that are kind of hard to do in NYC. So yeah, have a fun week everybody!

In the meantime, I would recommend pairing this sloppy joe grilled cheese with some smoked mac and cheese, a crisp refreshing iceberg wedge salad, or some indulgent buffalo fries! 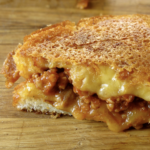 This sloppy joe grilled cheese recipe was one of my first viral recipes back when I started this blog a million years ago. It's made with leftover sloppy joe beef, sharp cheddar, and pickle flavored potato chips between two brioche buns. On the outside of the grilled cheese, a crispy cheesy crust is formed to add extra goodness!